Want to know more about the wildlife in China? Here’s a list of 21 animals in China that you can see in the wild:

Giant panda – One of the cutest animals in China

One of the world’s cutest and most loved animals is the giant panda. The giant panda is a part of the bear family and is characterized by its thick black and white fur.

The pattern of their fur is always the same – the black covers the wrists, legs, shoulders, ears and around the eyes. They can weigh up to 150 kg and are around 150 cm long + 90 cm long tall.

Giant pandas can eat both plants and meat but prefer to eat bamboo which is like candy for them.

Most of the Giant Pandas live in southwest China.

The Pallas Cat is almost the same size as a normal cat, but it looks bigger due to it’s long and thick fur. The color of the fur changes in spring and winter – during spring the Pallas Cat gets a red fur and during the winter it turns grey.

What characterizes the Pallas Cat is their big foreheads and large eyes, which makes it look like they have a flat face. They’re also one of the most grumpy-looking cats on the planet. 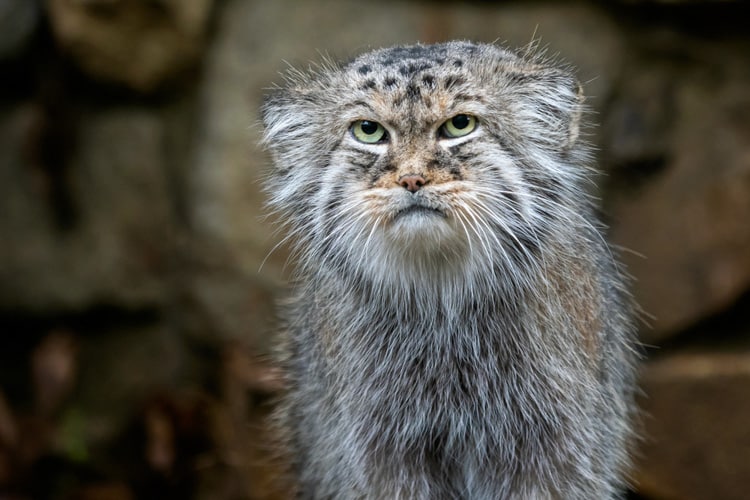 The Asian elephant is one of the biggest animals on the planet, after the African elephant. They’re a bit smaller in size and have smaller and rounder ears.

The elephant uses its trunk to eat, drink, grab things, as well as a shower. They suck in water in their trunk and then spray it over their bodies – they’re very clever animals.

Asian elephants are vegetarians and likes to eat grass, roots, fruits, and bark. 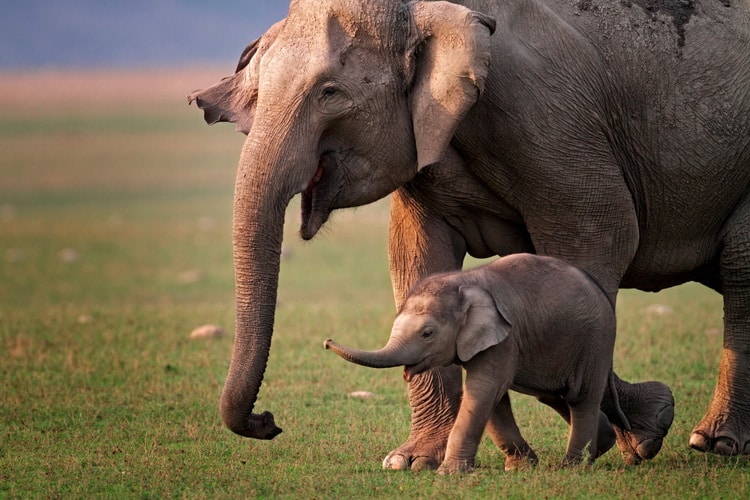 These beautiful animals are to be found in Western China, as well as in eastern Afghanistan to Mongolia.

Today the snow leopard is listed as vulnerable on the IUCN Red List. It’s threatened by habitat destruction as well as illegal hunting. 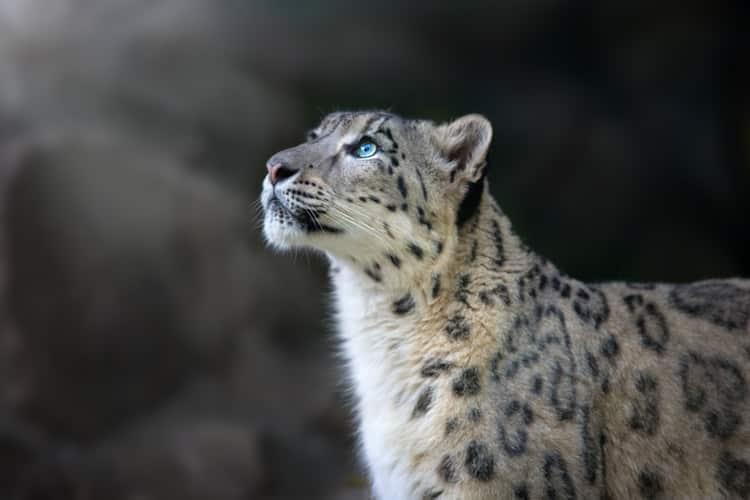 In the warm coastal waters of the Pacific Ocean, you’ll find this fascinating creature. The Dugong is one of the weirdest animals in China and is a species that are similar to manatees when it comes to its behavior and appearance. The only difference between them is that the Dugong has a tale like a whale.

Dugongs are vegetarians and feed mainly on underwater grass.

Fun fact: Scientific studies show that the Dugong is related to the elephant, even though they do not look alike or have the same behavior. 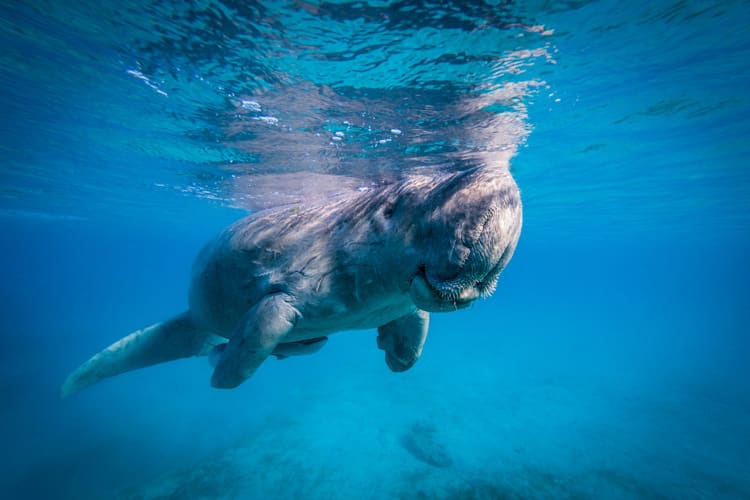 The Golden Snub-Nosed Monkey, is known to be one of the most beautiful animals in China with its golden fur. They live in the mountainous forests of the southwest and central parts of the country.

Golden Snub-Nosed Monkeys live at elevations between 1500-3400 m, and is one of the primate species that can withstand cold and harsh climates with snow.

The Golden Snub-Nosed Monkey is today endangered due to habitat loss. 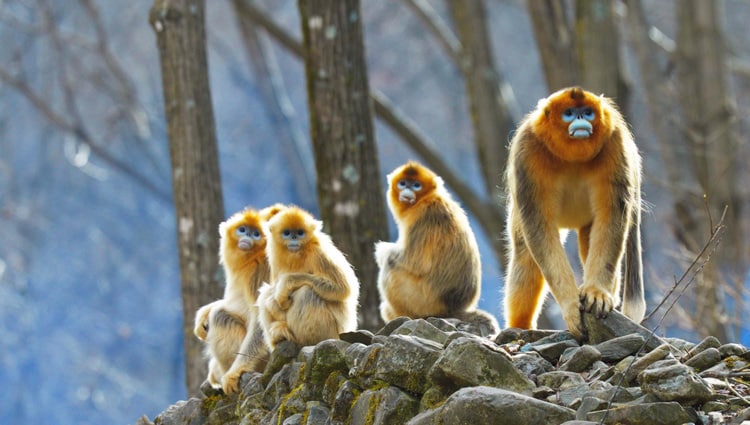 In Northern China there’s a possibility to see these interesting animals in the wild.

They live in steppe and semideserts and eat insects and smaller bugs. 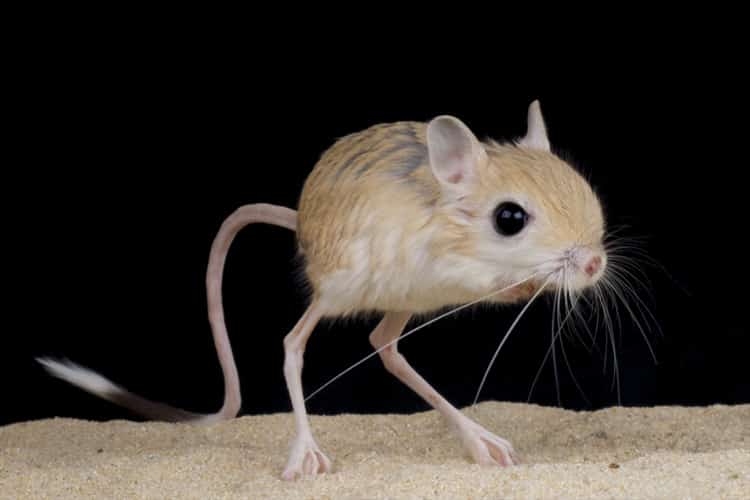 The Binturong have a long body with thick black fur, short legs, and a long bushy tail.

In China they live in Yunnan. 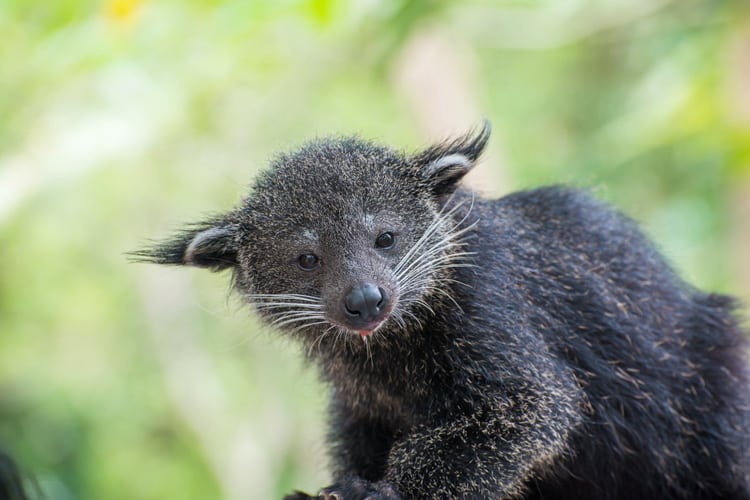 Sable is a species of marten and live in the dense forests of China, as well as in Russia, Siberia, Mongolia, Kazakhstan, North Korea, Japan, Poland, and Scandinavia.

They’re famous for their beautiful dark brown fur that people still today, unfortunately, hunt them for. 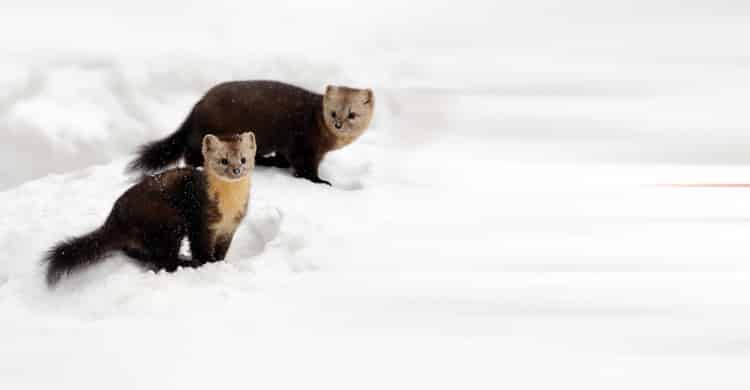 Among all the animals in China, the Gibbons are one of my favorite animals.

Gibbons are primates that live in tropical and subtropical forests of Southern China, eastern Bangladesh, Indonesia, and India.

One fun thing about the Gibbons is that sometimes they walk on two legs with their arms raised for balance, just as humans would do. Down blow you have a video to see how it looks like. 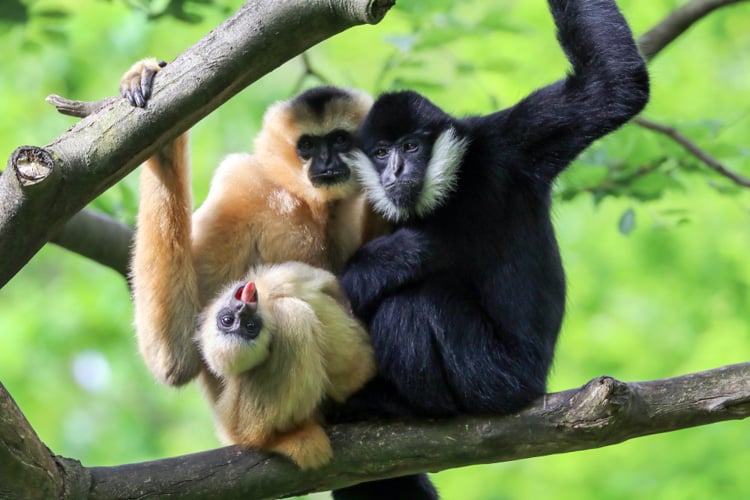 One thing that characterizes the Siberian ibex is its horns. The females horns are small, but the males can grow horns up to 148 cm (58 in). Both the females and the males have the iconic circular rings around their horns, which represent annual growth.

In China they live in the western and northern parts of the country. 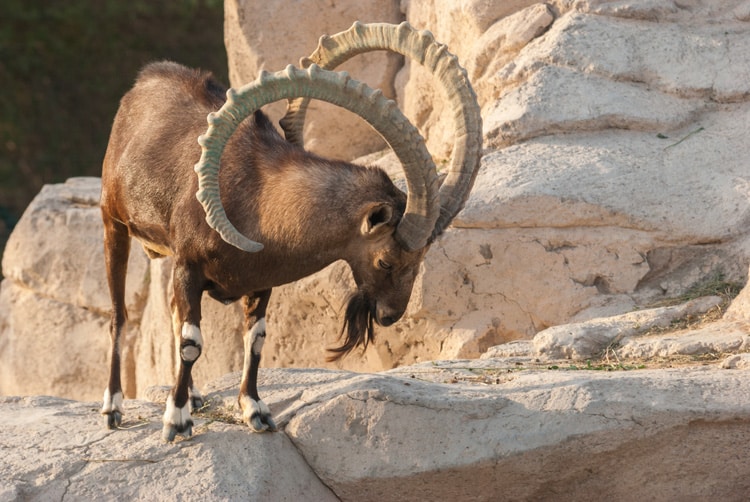 Wolverines is the largest land-dwelling species of the family Mustelidae. They’re muscular and strong mammals that have the looks of a small bear.

They have short legs, wide round heads, small eyes and short ears. With their long claws they can easily climb trees, steep cliffs, and snow covered peaks.

The wolverines are known for being small and strong. They can kill preys that are much bigger than themselves. 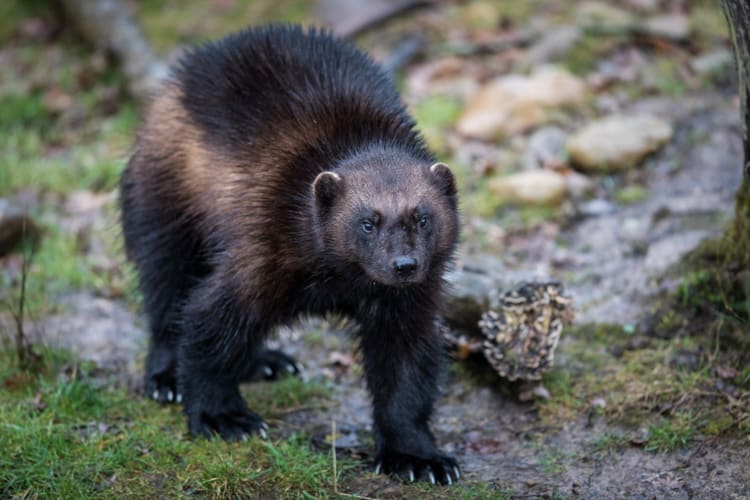 One of the coolest animals in China is the lesser mouse deer.

The lesser mouse-deer is the smallest deer and hoofed mammal in the world. When fully grown they get 45 cm (18 in) long and weights around 2 kg (4.4 lb).

They have reddish to brown fur with white marks on their neck.

In China, the lesser mouse-deer lives in Yunnan, in primary and secondary forests feeding on fruits, leaves, shoots, and sometimes fungi.

The lesser mouse-deer is a pretty shy animal, and is therefore rarely seen in the woods. 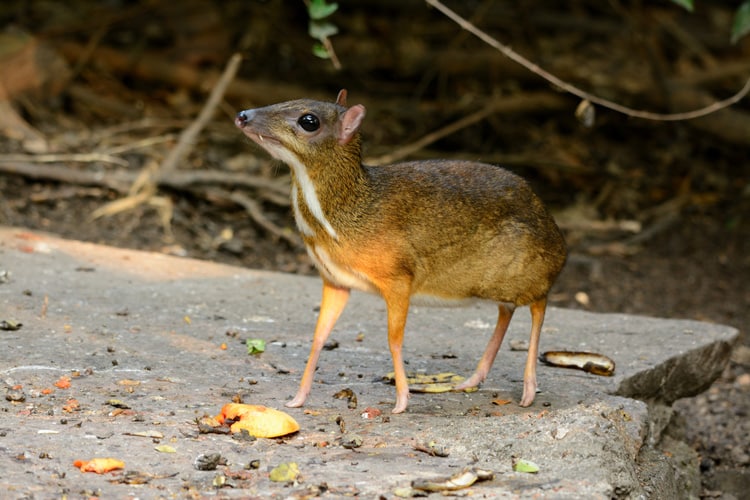 The Chinese pangolin have the looks of an armadillo and behavior of an anteater. However, this little mammal is not closely related to either armadillos or anteaters but to bears and cats.

They live in the grasslands in southern China, in burrows that they’ve dug with their long claws.

Today the Chinese pangolin is critically endangered due to its meat that’s seen as a delicacy in many countries, and for its scales that are used for traditional medicine – even though there’s no proof that it cures anything. 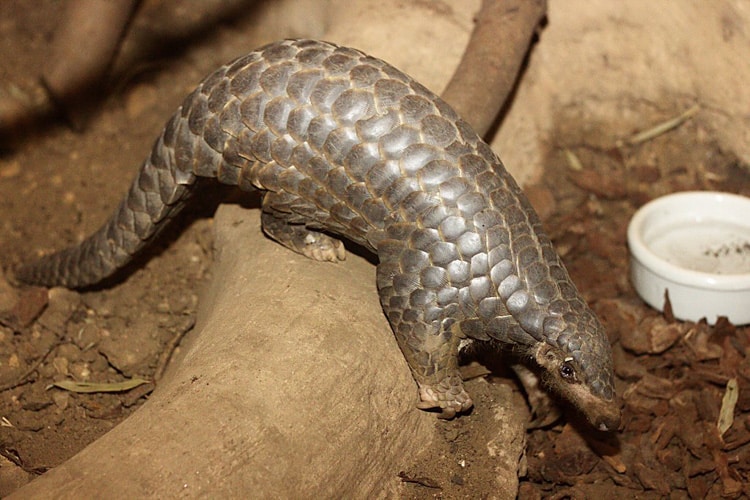 The Chinese Mountain Cat, also known as the Chinese Desert Cat, is a small wild cat that lives in western China.

It has a sand-coloured fur with dark guard hairs, whitish belly and legs, and a bushy tail with black rings.

These wild cats are today vulnerable due to the poisoning of pikas, which is a part of the cats diet. 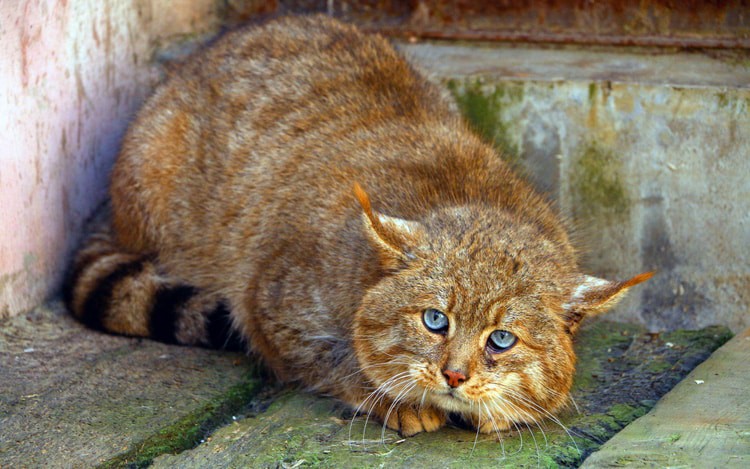 Bactrian camels have two humps on their back where they store fat. The fat that they store they can later convert into water and energy when it’s not available.

Their humps makes it possible to travel far distances without drinking any water, even in hot and dry deserts.

The only wild camels that exists today are found in China, and in the Gobi Desert of Mongolia. 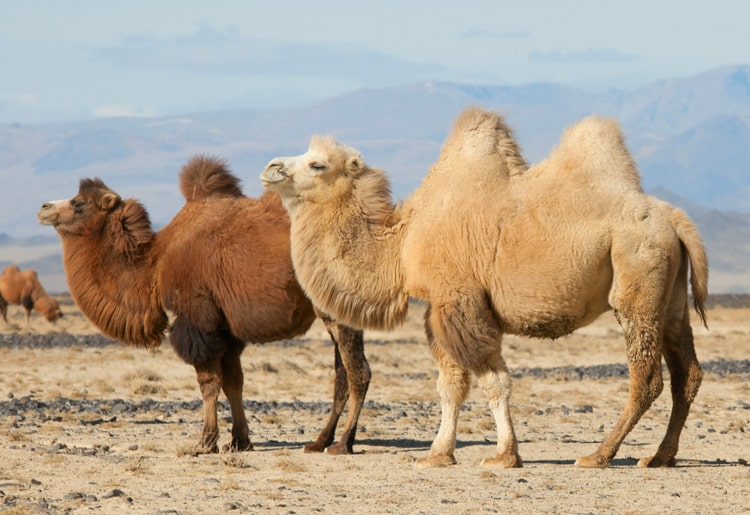 The clouded leopard is, in my opinion, one of the most beautiful animals in China.

Cats are famous for being good climbers, but the clouded leopard takes it to a whole new level. These beautiful cats can even hang upside down on large branches using their paws and claws.

They’re pretty rare to see in the wild, and that’s why there’s so little information about the population of the clouded leopard. That’s why they’re today listed as vulnerable on the IUCN Red list. 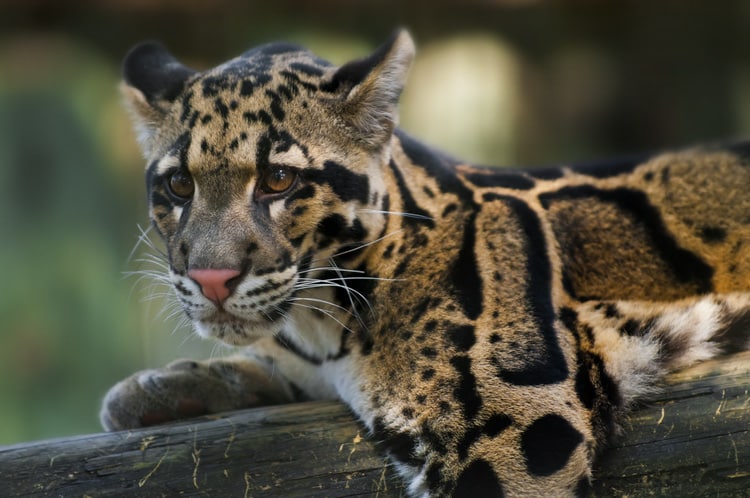 The Siberian musk deer lives in northeast China. They’re quite small but fast animals, which makes it possible for them to hide and run from predators.

Siberian musk deers are famous for their fangs, which makes them look like vampires. Even though they have fangs, they are herbivores and mainly eat lichens.

Today they’re listed as vunurable on the IUCN Red List due to the illegal hunting of their musk gland. 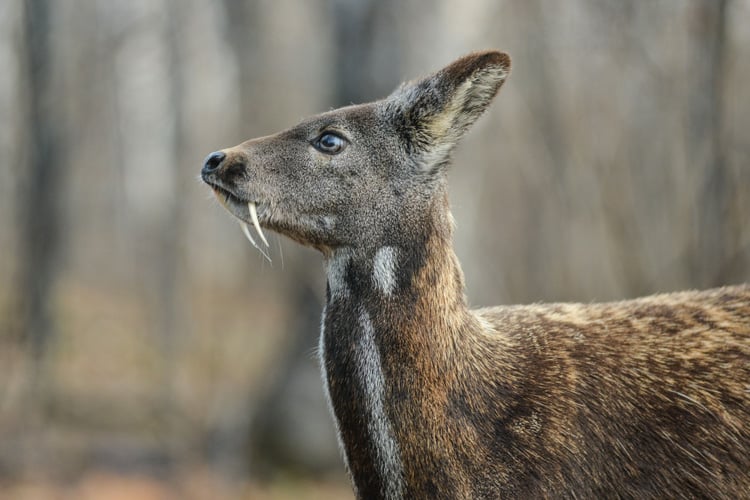 The cute slow lorises lives in the Yunnan province of China. They’re characterized by their round heads and large round eyes that give them stereo vision.

The slow loris is no doubt one of the cutest animals in China. 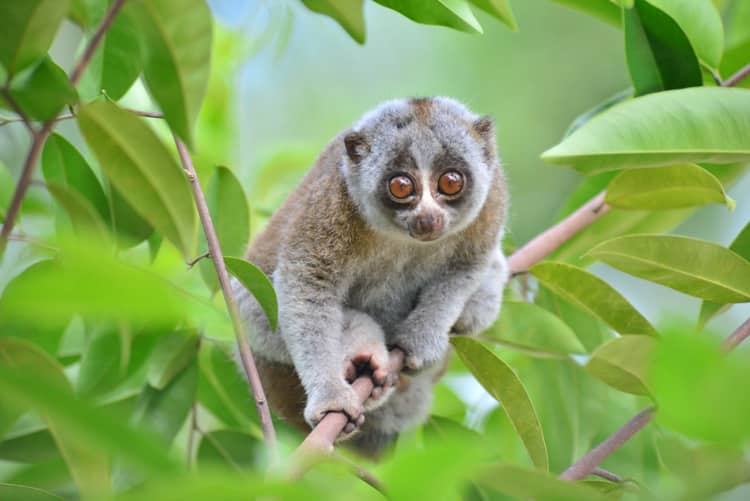 In southern China you can spot a black giant squirrel if you’re lucky.

The species lives in hilly areas up to 2500 m high mountain areas.

Black Giant Squirrels mostly stays in the wild forests, and rarely enter plantations and settlements. They like to eat fruits, leaves, pine cones, and seeds. 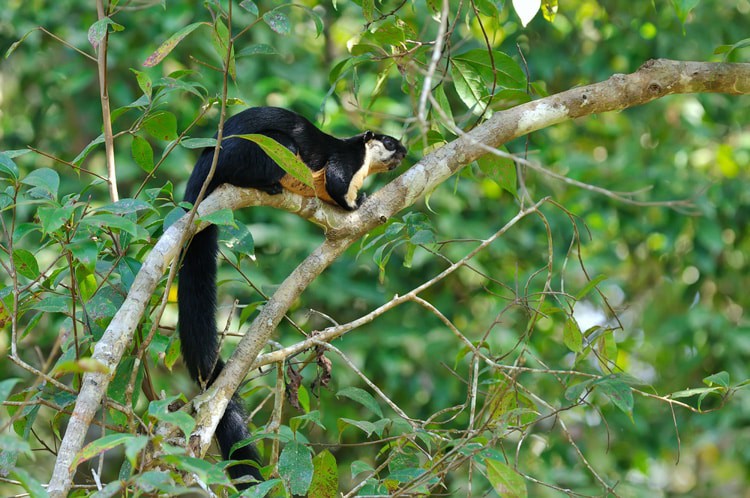 The Goitered gazelle is a beautiful animal that lives in northwest China.

They have a light red/brown to grey/brown fur with a white belly and a black tail. Unlike other gazelles, only the males have horns (but sometimes can the females have small horns as well).

Their horns are dark and lyre-shaped, and the males also have an enlargement of the neck and throat during the mating season.

Today the Goitered gazelle is listed as venerable on the IUCN Red list due to habitat loss and hunting.

When traveling in China is good to know about the dangerous animals as well, if you’re planning to be out exploring in the wild. It’s in southern part of the country that you’ll find most of them, and down below you have a list of theses dangerous animals in China: 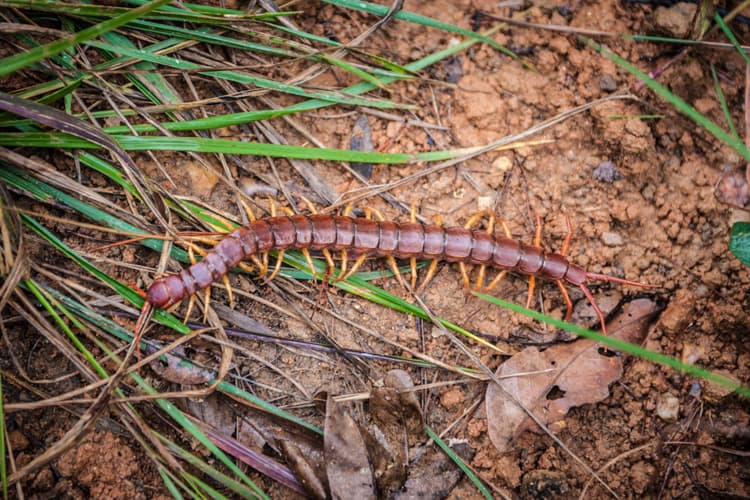 Do you have any other questions about the wild animals in China? Leave a comment below!