Want to know more about the wild animals in France? Here is a list of 21 French animals that you can see in the wild:

The harbor seal is one of the cutest animals in France and can be spotted along the French coast of the English Channel.

They are recognized by their brown, grey, or silver white coat with a unique pattern of spots on the back. Harbor seals have short flippers and round heads with V-shaped nostrils. They do not have visible ear flaps, however their ear canals are located behind the eyes. 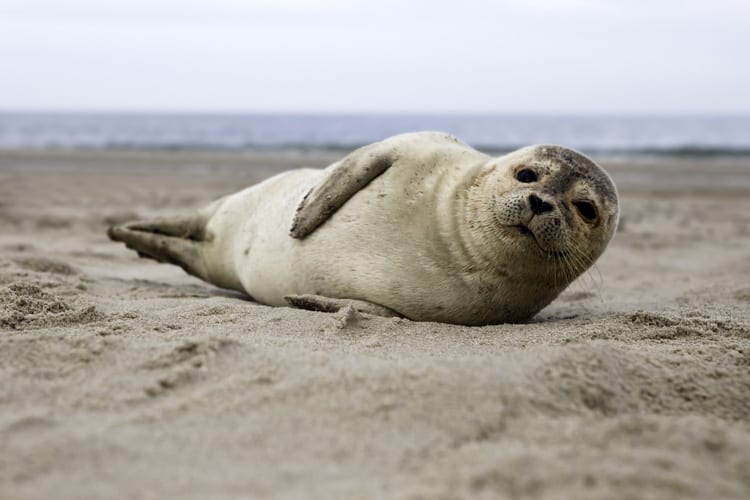 The roe deer is a small species of deer found in the northern part of the country. They can grow up to 135 cm (4.4 ft) in length, 75 cm (82.5 ft) at the shoulder and weight up to 35 kg (77 lb). Roe deers are recognized by their velvet-like fur of brown to reddish color. They have white underparts, big pointy ears, and a big nose.

Roe deer live in the woods of France where they mainly feed on leaves, grass, berries, and young shoots. 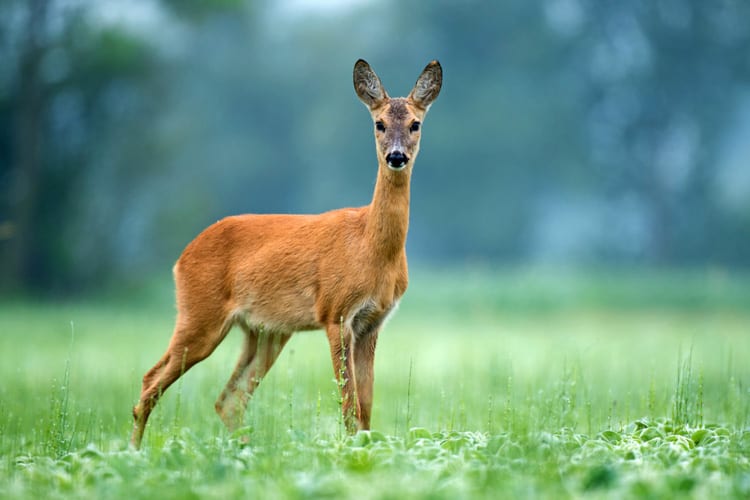 Alpine marmots eat mostly grass and different kinds of herbs, but also eat insects, spiders and worms. When eating they hold the food in their forepaws.

If you hear a loud whistling sound when out hiking in the alps, it’s most likely an alpine marmot around. Down below you have a video where you can hear the funny sound of this French animal. 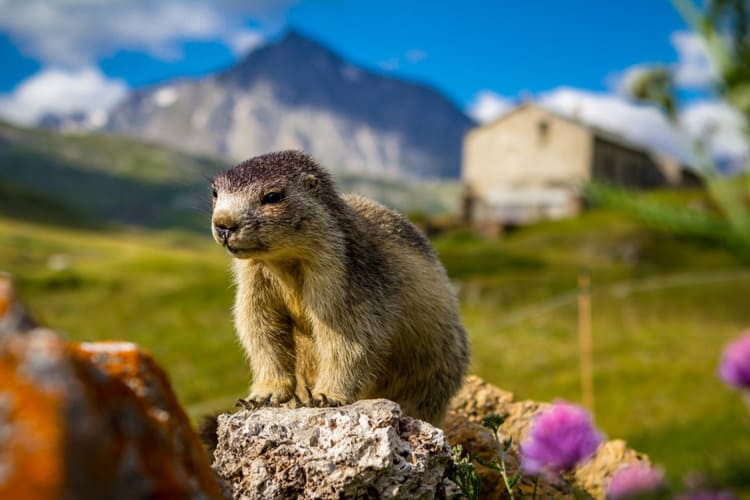 This is one of the smallest animals in France and only weights around 4 g (0,14 oz). It’s found all over France and is one of the animals with the highest metabolic rates in the world, which means that it have to eat every two hours to survive.

The eurasian pygmy shrew lives in undergrowth and leaf litter where it hunts for small insects and invertebrates. 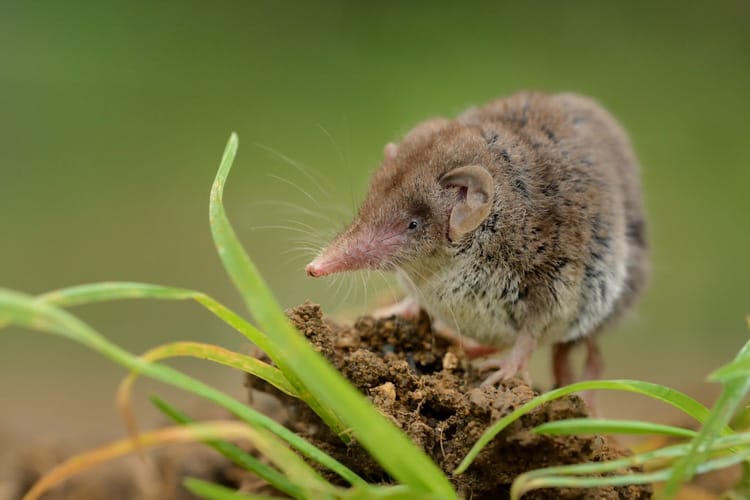 The garden dormouse is in my opinion one of the cutest animals in France. Just look at its tiny feet, big eyes, and round ears.

They are tiny rodents and usually reach a body length between 10-15 cm (3.9-5.9 in) and weigh around 60-140 g (2.1-4.9 oz). The garden dormouse have a grey to brown fur with white underparts and black marking around their eyes. They’re also recognized by their large ears, big eyes, and white tassel at the tip of the tail.

In spite of its name, garden dormouses mainly live in forests where they feed on large insects such as grasshoppers and beetles, but also on snails, eggs, small rodents, spiders, fruits, nuts, and berries.

In France, they’re commonly found in the Alps. 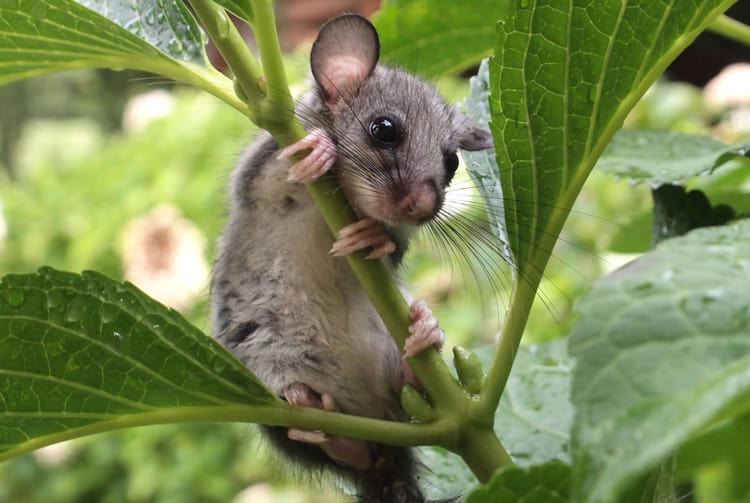 This small mammal lives in underground tunnel systems that they build by digging with their long claws. They eat a variety of insects, mice, shrews, and centipedes. However, earthworms are their main source of food since they can paralyze them with their saliva.

European moles are characterized by their dark grey fur, small ears and eyes that are hidden behind the fur. They usually weight around 130 g (4.6 oz) and can grow up to 16 cm (6.3 in) in body length.

You know that there’s a European mole around if you see the iconic molehills, which is the entrances to their tunnels. 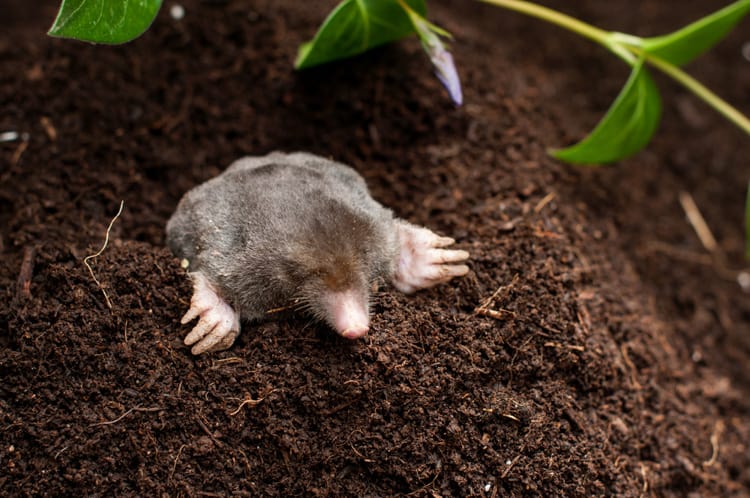 Flamingos is probably one of the most exotic animals in France and are mainly found in the marshland of the Camargue National Park in the southern part of the country.

There are 6 different species of flamingo all over the world, and in France you can spot the greater flamingo – which is the largest in the flamingo family.

New borns are grey in color and with age they get this beautiful pink color. The color comes from the carotenoid pigments in the organisms that live in their feeding ground. 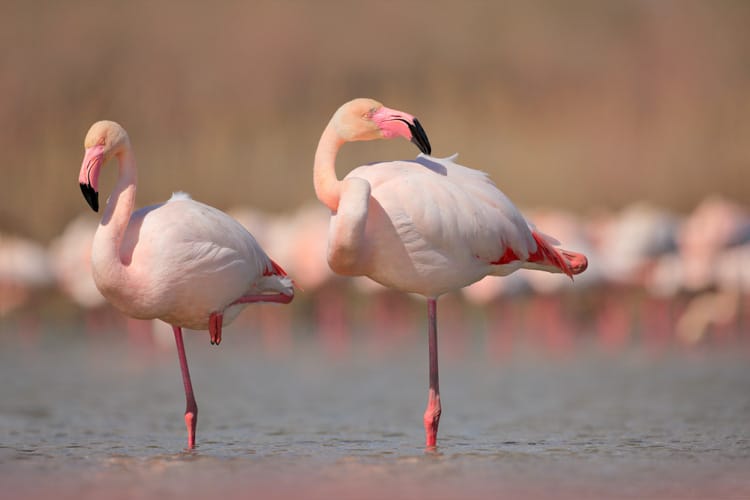 This marine mammal is a large species of dolphin that’s found in most oceans around the world, as well as in the waters outside of France.

The name false killer whale comes from the similar skull characteristics that they share with the killer whale. 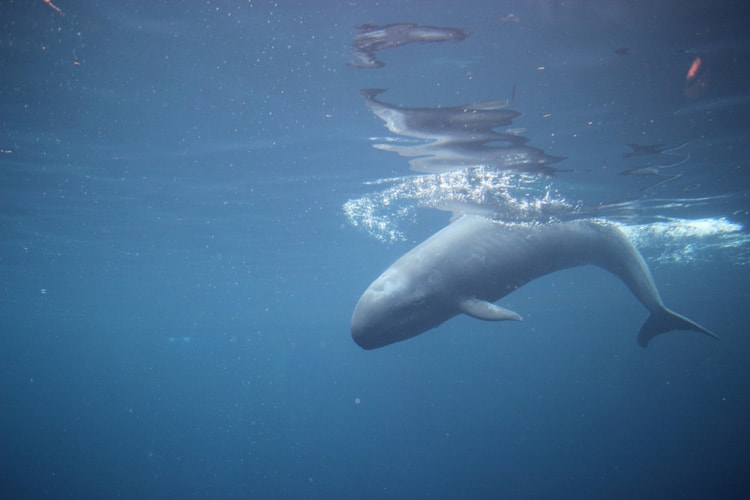 The marbled newt is found in most parts of France and are recognized by their dark brown / black bodies with beautiful green patterns.

Their bellies are black with white specks, and the females are recognized by the orange stripe running down from the back of their head to the tip of the tail. All young marbled newts have this stripe, but it fades away on males with age. They can grow up to 13-17 cm (5-6.5 in) in body length.

An interesting fact about this animal is that they use the stars to navigate the breeding pools.

The lynx is one of the rarest and most beautiful animals in France, and is a species of wild cat. They are very shy and hard to spot, so if you would see one in the wild you would be very lucky.

In France they live in high altitude forests with cover of shrubs, reeds and tall grass – where they can live a quiet and isolated life.

They only come out when hunting for food that mainly consists of deer and chamois, but also smaller preys such as hares, foxes, sheep, squirrels, mice, turkeys, and different kinds of birds.

They’re characterized by their short reddish to brown coat with lighter underparts and black spots. They have long legs, large round paws, a bobbed tail, and black tufts on their ears. 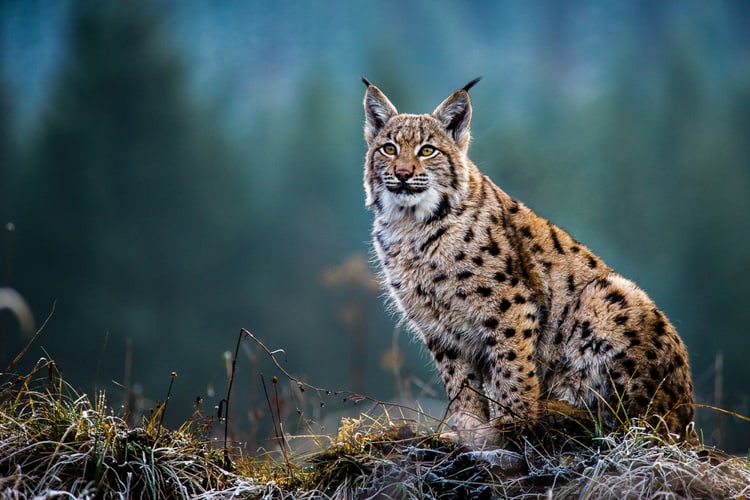 The Chamois is a species of goat-antelope that’s found in the Alps, Jura in Franche-Comté, southern Vosges Mountains, and in the high parts of Massif Central.

They’re characterized by their brown colored fur with white marks on the sides of the head, as well as the long horns.

The Eurasian wolf is a subspecies of grey wolf and is native to Europe. Wolves used to be extinct in France, but today there are an estimate of 300 wolves living in the country.

They are mostly found in packs of 6-12 wolves where they hunt together. They usually hunt deer, chamois, and hares.

Wild Boars are seen in most rural areas of France, mostly in woodland and agricultural areas. It’s a bulky animal with short legs and a short massive trunk. They have a large head that they use to dig in the ground. It works like a plough and can be capable of digging 8-10 cm (3.1-3.9 in) into frozen ground.

Attacks towards humans are rare, but can be real serious if it would happen since they can do much damage to the lower part of your body. It attacks with its tusks towards the victim, and will attack until it stops moving. 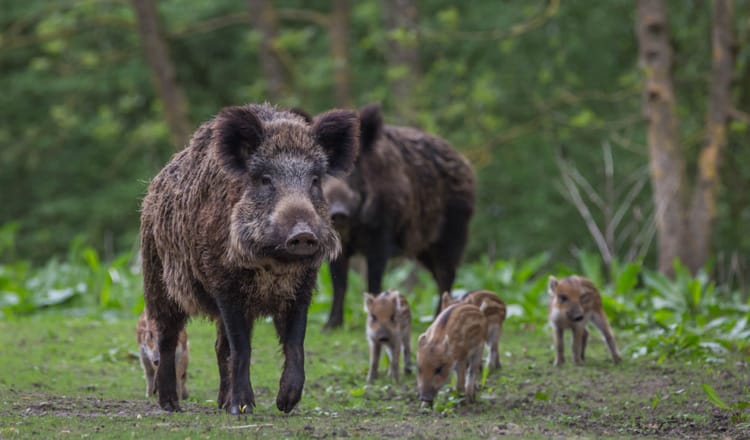 The golden eagle is known for being a fast flyer as well as having strong feet that it use to catch its prey in the air.

It’s characterized by its dark brown feathers and the golden color around the back of their necks. They have white streaks on their tails and white marks on their wings. This is the fifth largest bird among eagle species in the world.

An interesting fact is that the female golden eagles has almost double the wingspan and weighs around 5 times more than the males.

In France it’s also possible to spot foxes in the wild, if you’re lucky. They are isolated animals and also good at hiding, and therefore they can be quite hard to spot.

In France they live in forests and can be found in most wildlife parks around the country. They are fast animals and can run up to 70 km/h (43 mph) .when hunting for food or being chased by predators.

They usually hunt alone for preys like birds, small rodents, eggs, and insects. 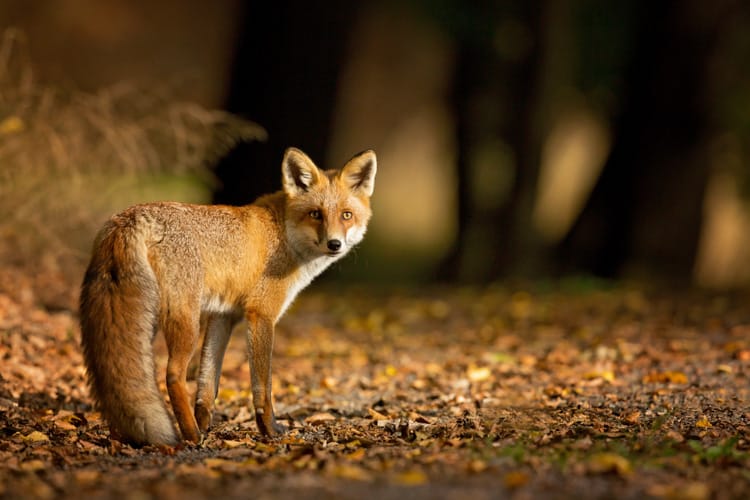 The European mink is a species of mustelid and is native to Europe. They primarily live by forest streams where they hunt voles, frogs, fishes, crustaceans, and various insects.

European minks have long bodies with short legs and large broad heads. They are fast animals, and also good swimmers and divers – they can stay underwater for 1-2 minutes.

It’s recognized by its thick and dense fur of dark brown to blackish-brown color with white spots around their lower lip and chin. 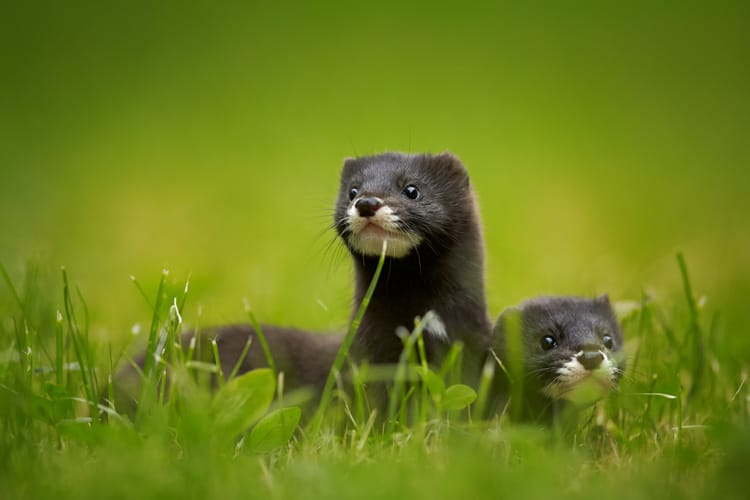 The mouflon is one of the animals in France that are today listed as vulnerable on the IUCN Red List of threatened species. It’s a subspecies of wild sheep and are found in the woods of France where they mainly feed on grass, shrubs, and different kinds of herbs.

They’re characterized by their beautiful brown coat and ribbed curvy horns. In the wild, they are easy to recognize because of their special looks.

A fun fact about the mouflon is that they yearly grow a new ring on their horns, which helps to determine their age. 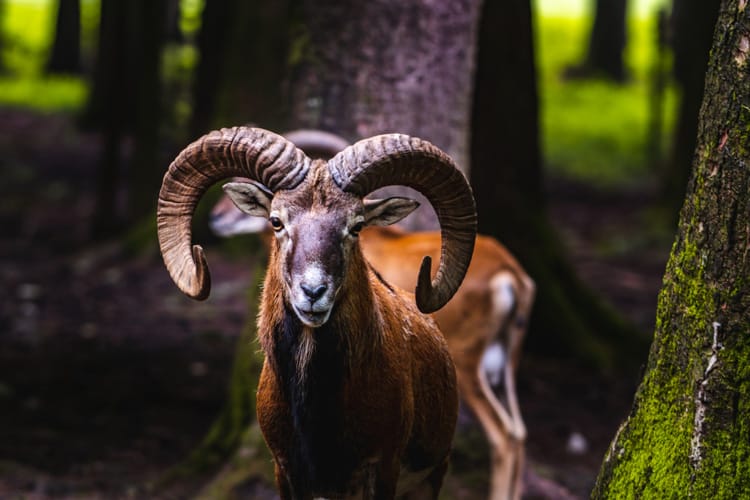 The brown bear is one of the most powerful animals in France, as well as one of the most dangerous. In France they’re mainly found in the Pyrenees Mountains, and are recognized by their big size and furry brown coat and big paws with up to 10 cm (3.9 in) long claws.

Thanks to their claws they are great diggers and use their claws to build dens and hunt preys that are  hiding in the ground. With their long and sharp claws they’re also able to climb up trees.

The European mantis is a large species of the mantis family. They are commonly called “praying mantis” due to the posture of their legs which looks like they’re praying.

They have long bodies with two pairs of wings and a triangular shaped head with large eyes.

An interesting fact about the European mantis is that after mating, the female mantis eat the male – which is known as sexual cannibalism.

It’s believed that they do this because it will give them a faster production of a large ootheca with large eggs, which means that there’s a bigger chance for their babies to survive.

Badgers have wide short bodies with short legs that they use for digging. They have long heads with small ears, and a big nose.

Badgers lives in burrows called setts, that can be very extensive – often with several underground passages and chambers with multiple entrances.

A fun fact about this animal is that they are very clean. They remove soiled material and brings in fresh bedding to their burrows. They even poop outside – strategically to mark their territory. 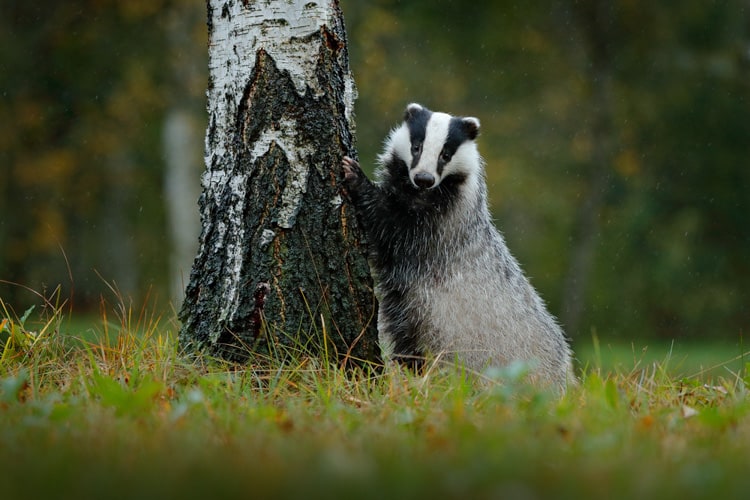 This is one of the French animals that can be found all across the country. It’s a species of marten that lives in the forests of France, as well as various other countries around the world.

Beech martens are recognized by their long bodies, long tails, pointy muzzles, and widely spaced ears. They have a grey / brown- colored fur with white marks around the throat.

They do not dig their own burrows, nor do they occupy other animals burrow. Instead they nest in spaces between stones in rock slides, clefts in rocks, and uninhabited stone structures. They can also live in tree holes at heights up to 9 m (30 in). 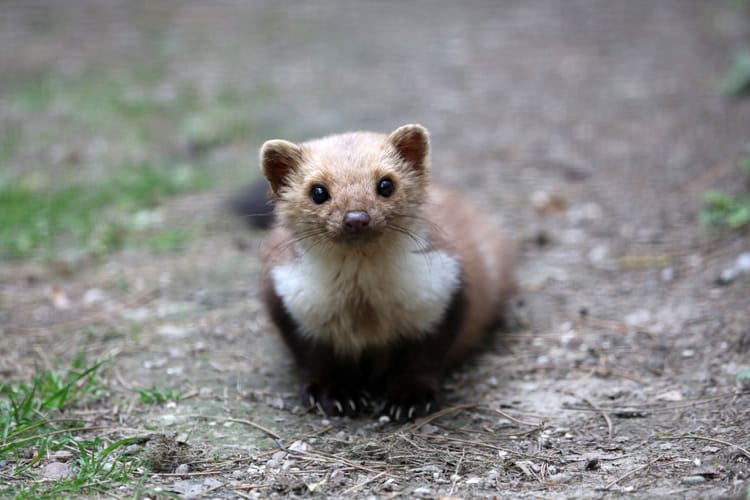 There’s a big variety of animals in France ranging from big to small animals. When exploring the wilderness of France it’s not 100% sure that you will spot several of these animals since many of them are shy and prefer to stay away from humans.

However, if you travel with an experienced guide you might be lucky to spot some of these French animals. Some are more common than others to spot in the wild, and some can also be quite dangerous if you cross paths with them.

The Gallic Rooster, also known as ”Le Coq Gaulois” in French, is the unofficial national animal of France. 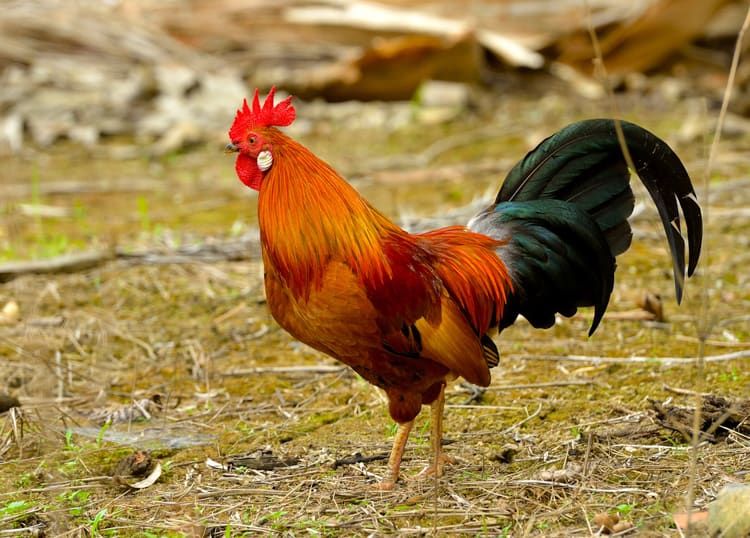 What are the most dangerous animals in France?

In France there are a couple of animals that could be dangerous towards humans. Snakes are one of the most dangerous animals in France, however, with todays knowledge a bite can be treated.

Down below you have a small list of dangerous French animals that are good to know about before exploring the French wilderness: 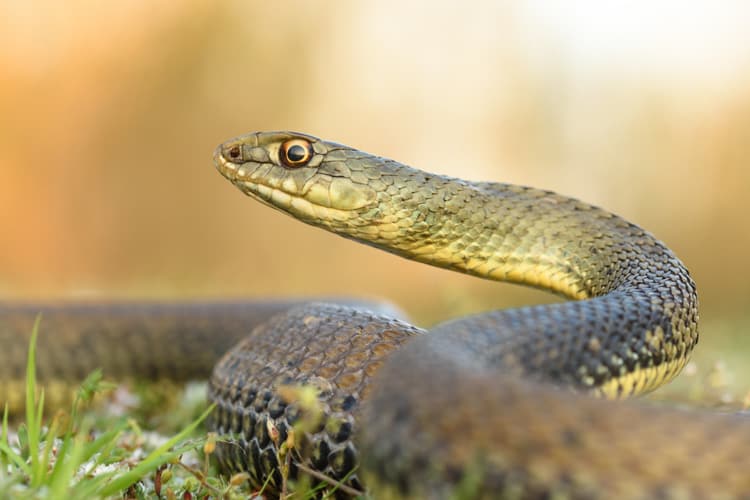 Do you have more questions about the wild animals in France? Leave a comment below!