Want to know more about the wildlife in India? Here’s a list of 21 animals in India that you can see in the wild:

The Bengal tiger is renowned for its power and strength. They live primarily in India, but can also be found in Bangladesh, Nepal, Bhutan, Myanmar, and China.

The female Bengal tiger gives birth to litters of 2-6 cubs, which they raise with a little help from the male, or no help at all. The tiger cubs start hunt when they’re around 18 months old and stay with their mother for around 2-3 years before leaving to find their own territory.

The Bengal tiger is not only one of the most powerful animals in India, but it’s also India’s national animal. 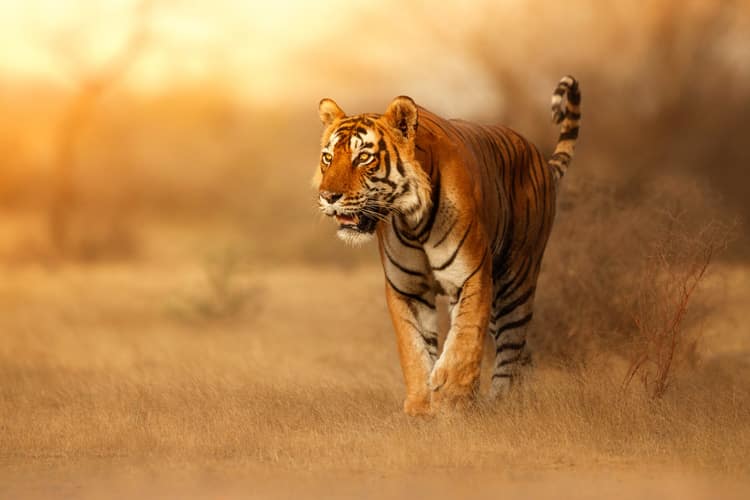 The elephant is one of the biggest mammals on earth, and therefore one of the biggest animals in India. Elephants live in a matriarchal family group of related females called a herd. A herd can consist of around 100 elephants, and it’s often led by the oldest and largest female.

Indian elephants like to eat grass, roots, fruits, and leaves. A fun fact is that they can eat about 330 pounds of food a day. 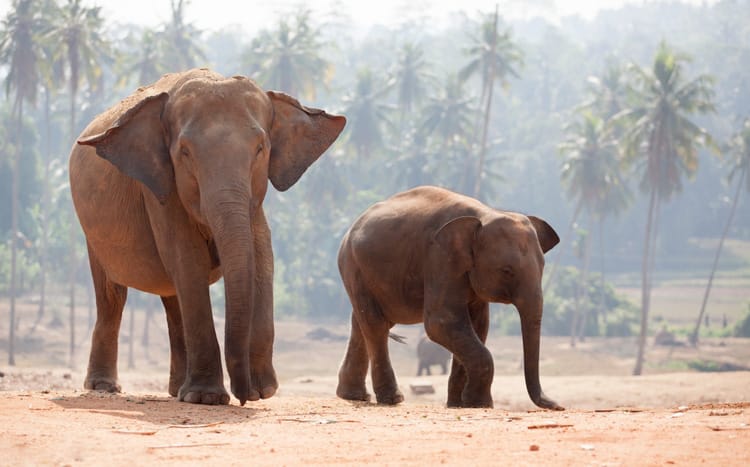 You can also hear from the Latin name, Rhinoceros unicornis, that they only have one horn. 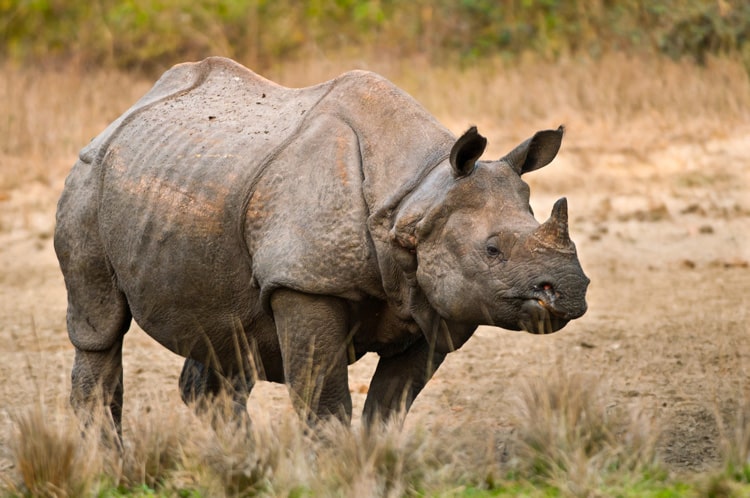 The lion-tailed macaque lives in the Western Ghats mountains of India. It’s a diurnal animal, which means that it’s active during the day. 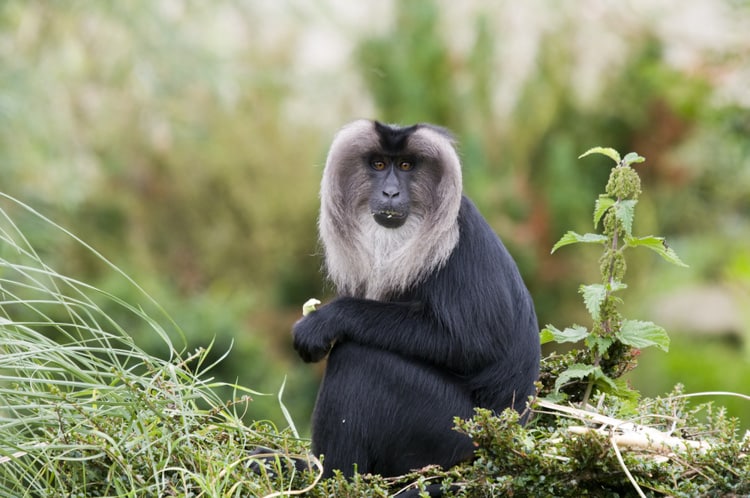 Almost all wild lions on this planet live in Africa, but there’s a small population of Asiatic lions that live in India. They live in the Fir Forest in “prides” (a group of lions) where there can be up to 3 males, a dozen related females, and their cubs. The females are the primary hunters, and they often hunt together to kill large animals. The Asiatic lion is one of the fastest animals in India.

It’s only the male lions that get characteristic manes, which is the long hair around their heads. 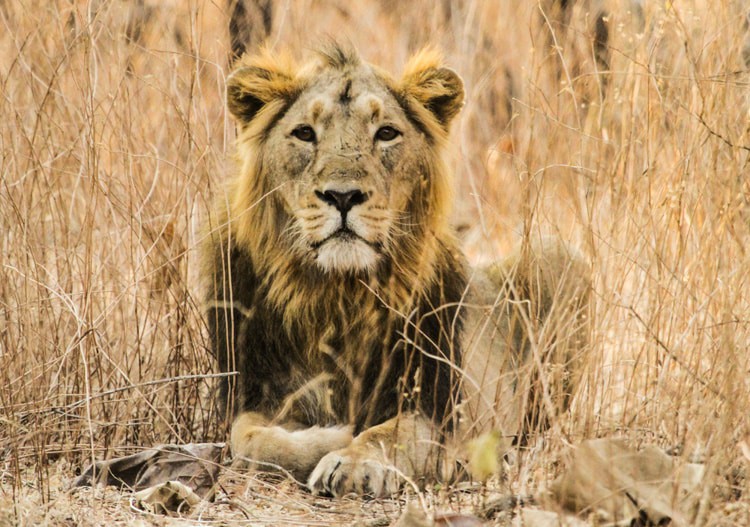 The Indian leopard is a subspecies to the leopard and lives in India as well as in Nepal, Bhutan, and parts of Pakistan. It’s one of the most beautiful animals in India. They live in tropical rain forests, temperate forests, northern coniferous forests, and dry deciduous forests in India. 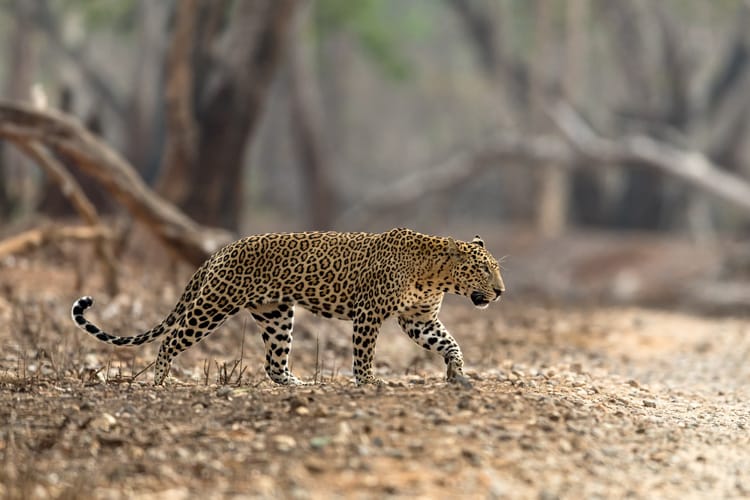 Sloth bears are native to the Indian subcontinent. It’s a lanky bear famous for its shaggy fur and mane around the face. The sloth bear is also characterized by its long lower lip and sickle-shaped claws.

They’re excellent hunters of termites, which they can locate by the smell. 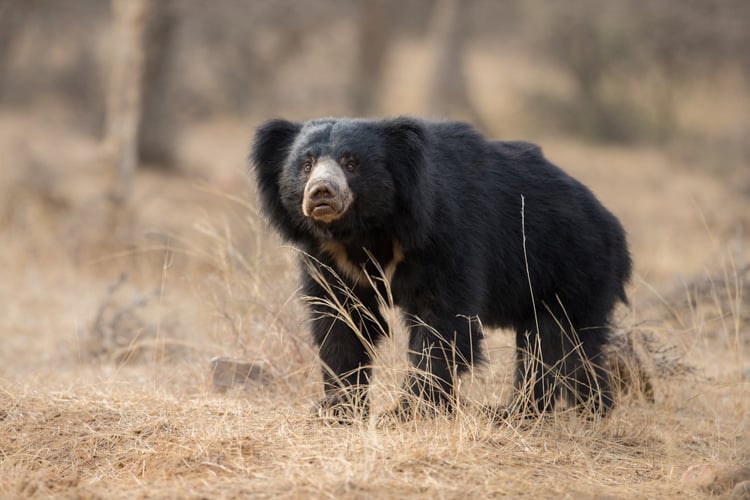 A wild water buffalo can weight up to 1200 kg (2600 lb), which makes them one of the heaviest of the wild bovine species. 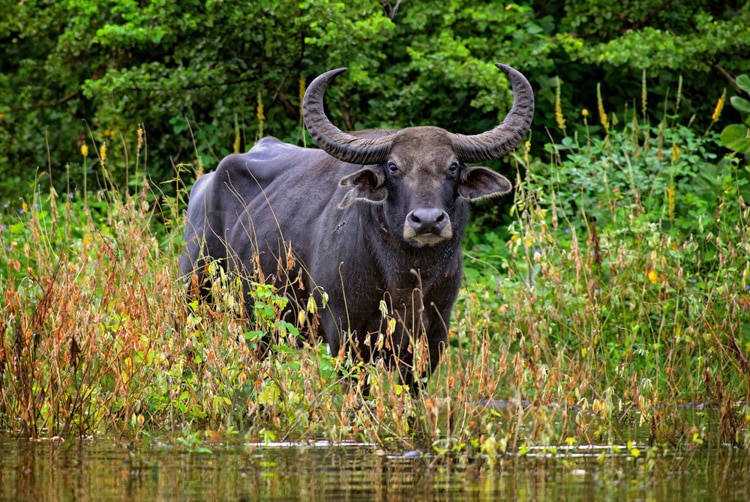 Indian wild ass, also known as Ghudkhur is a subspecies of the onager that’s native to Southern Asia. They live in western India, as well as in areas in southern Pakistan, Afghanistan, and south-eastern Iran. Today, their last refuge is the Indian Wild Ass Sanctuary in Little Rann of Kutch in the state of Gujarat.

The Indian wild ass is characterized by its sand-colored fur and dark mane, followed by a dark brown stripe running along their back to the root of their tail. 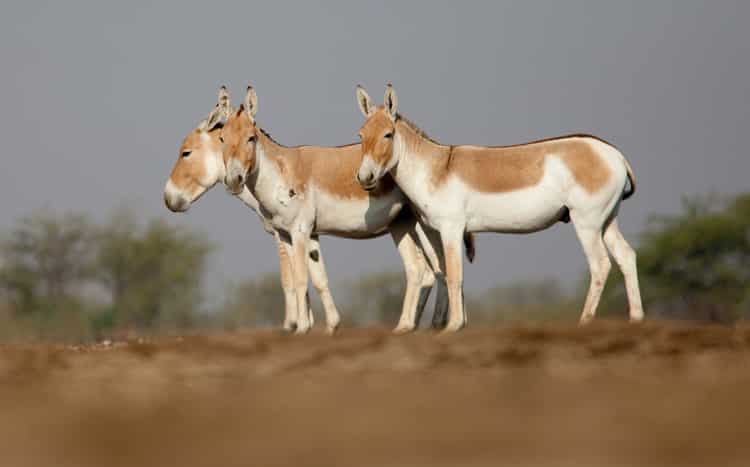 Gaur – One of the heaviest animals in India

The gaur, also known as the Indian bison, is the largest of bovines. It’s native to south and Southeast Asia and can be spotted in several national parks in India. Nagarhole National Park, Bandipur Nationalpark, and Periyar National Park are just to name a few.

It’s characterized by its big horns, dark fur, and a strong and massive body that can weight up to 1500 kg (3306 lb). It’s one of the heaviest animals in India. 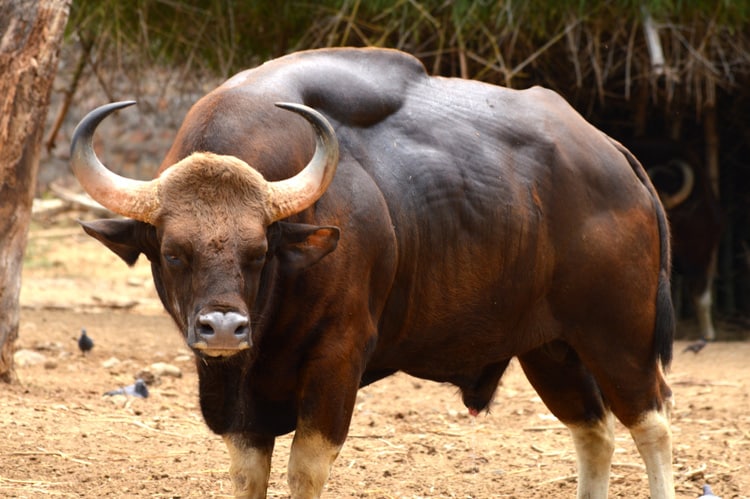 The largest Asian antelope is the nilgai, also known as the blue bull. They’re endemic to the Indian subcontinent and can be found in the scrub forests and grassy plains of northern India.

They’re big animals characterized by its bluish-grey coat, white spots on each side of its face, ears, cheeks, lips, and chin. Only the males grow horns, and they can get 15-24 cm long (5.9-9.4 in). 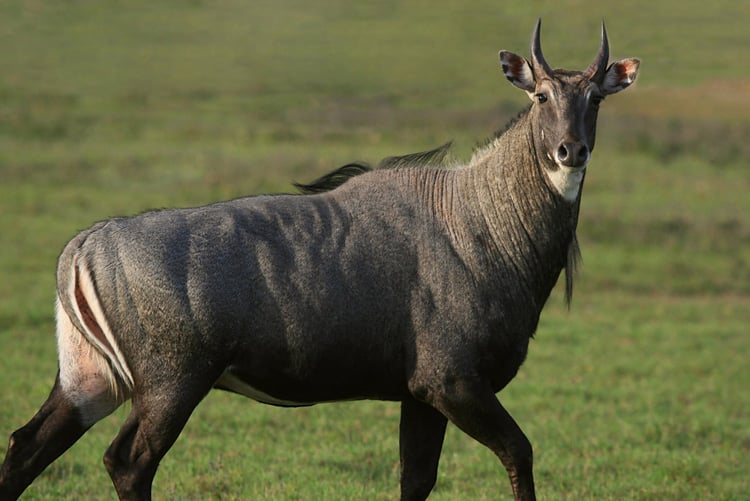 Indian pangolins lives in the forests and grasslands of India, and as well in Sri Lanka, Nepal, and Pakistan. 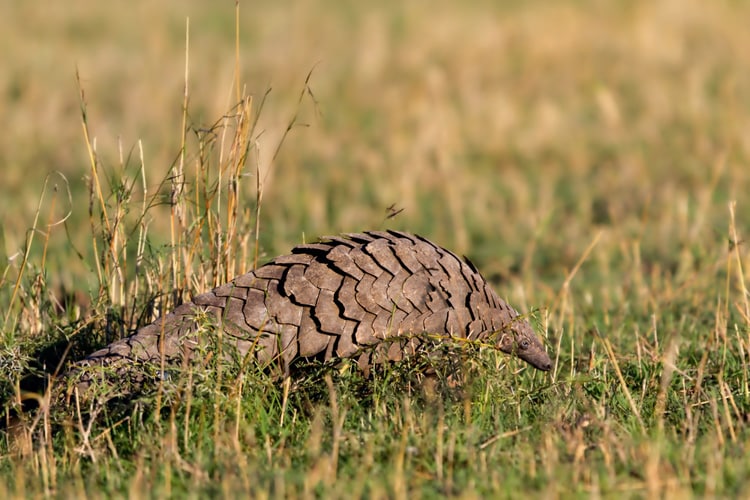 Like most other bats they rest during the day and are active during the night. 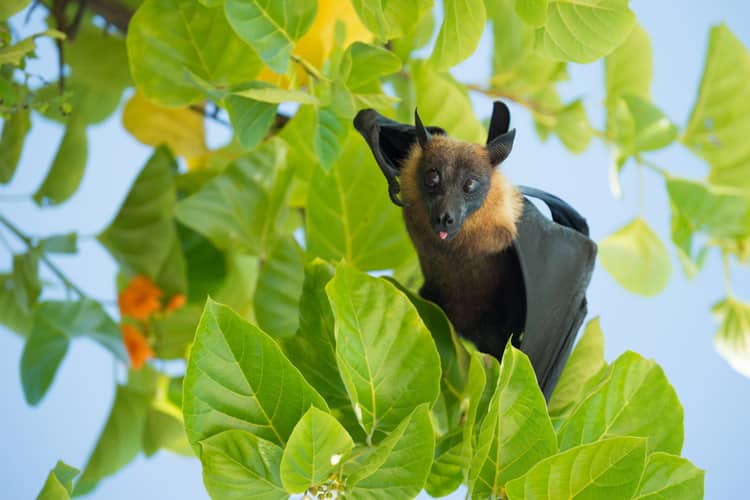 The chital, also known as the spotted deer is a species of deer that is native to the Indian subcontinent. Other than India they can also be found in Nepal, Bhutan, Bangladesh, and Sri Lanka.

They have a golden-brown fur with white spots. Their rump, throat, abdomen, ears, tail, and inside of their legs are all white, and their horns can get 1 m (3.3 ft) long. 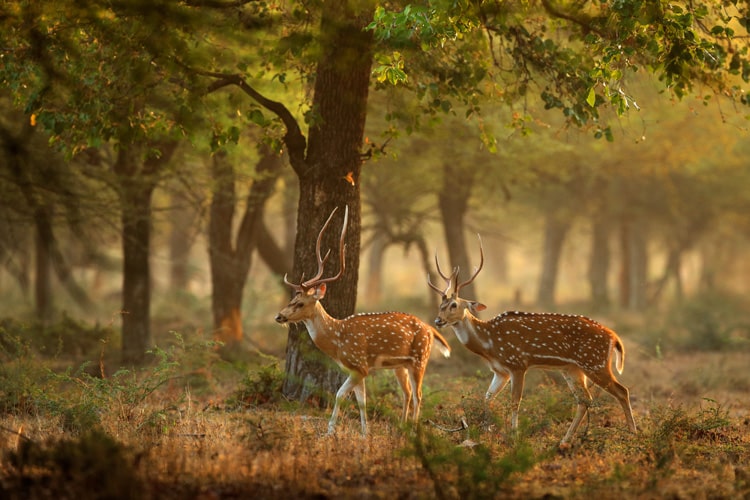 The Bengal Fox or Indian fox, as its also called, is a fox endemic to the Indian subcontinent. It can be found in most parts of India, as well as in eastern Pakistan, southeastern Bangladesh, and in the Himalayan foothills and Terai of Nepal. 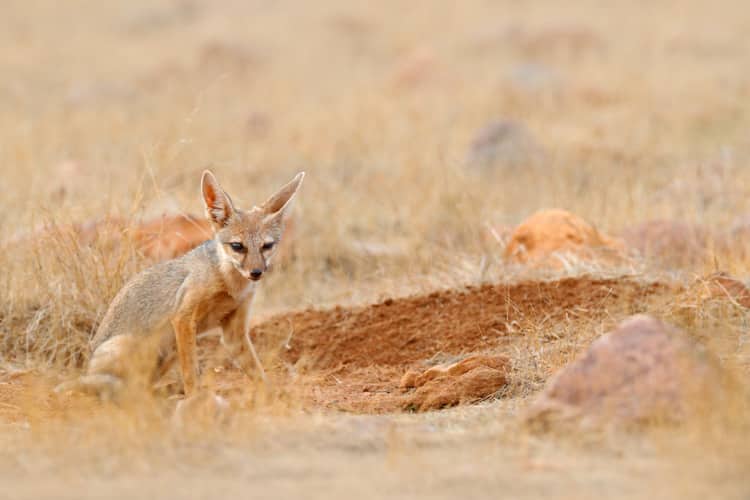 The striped hyena is lives in western India, as well as in the Middle East, the Arabian Peninsula and in parts of Africa.

When a striped hyena is feeling threatened, the mane can be erect, which makes them look much bigger and more intimidating to predators. 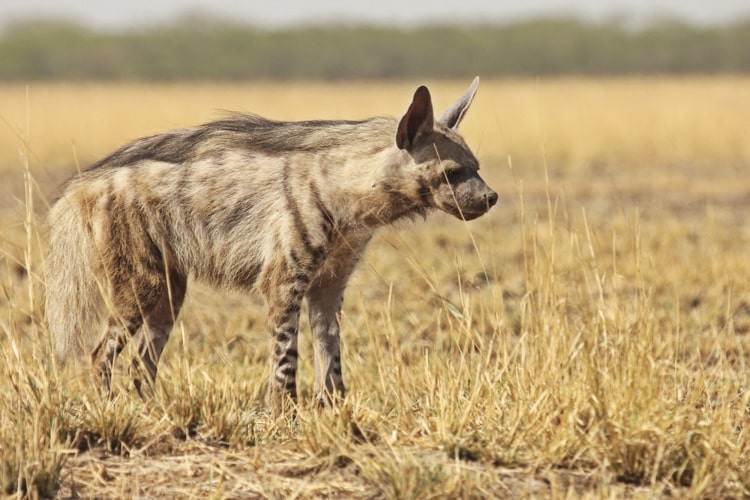 Red panda – One of the cutest animals in India

One of the most loved animals in India is the cute red panda. It’s native to the eastern Himalayas and southwestern China. A part of the population lives in the Meghalaya Plateau of north-eastern India.

It likes to sleep on tree branches or in tree hollows during the day and is the most active during late afternoon. When it’s hot outside it sleeps stretched out with its legs dangling from the tree branch and all curled up with its tail over its face when its cold outside. 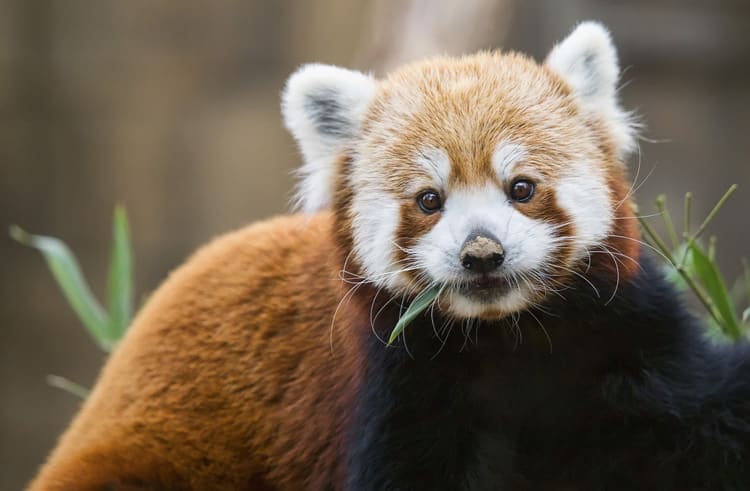 The gee’s golden langur, or golden langur, lives in a small region of western Assam in India, as well as in the foothills of the Black Mountains of Bhutan. Today, it’s one of the most endangered primate species in India.

The golden langur is characterized by its golden/cream-colored fur, black face, and its long tail. They spend most of their time up in high trees where they use their long tail as a balancer when jumping between branches. They like to eat fruit, leaves, seeds, buds, and flowers.

The gee’s golden langur is today an endangered animal in India.

Gharials, also known as gavials, are a type of Asian crocodilian that’s famous for its long thin snouts and jaws that are lined with more than 100 sharp teeth. They’re found along the Chambal river, Girwa river, and Son river, as well as in Nepal along the Narayani river.

The gharial crocodile is today one of the endangered animals in India. 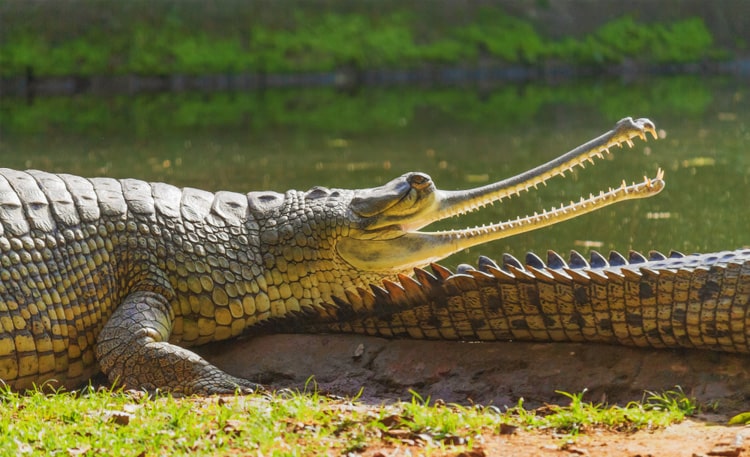 Indian Cobra – One of the most dangerous animals in India

The Indian cobra is a species that’s found in India, Pakistan, Sri Lanka, Nepal, Bhutan, and Bangladesh. It’s a member of the ”big four”, which means that it’s one of four venomous snake species responsible for causing the greatest number of snake bite on humans. It’s one of the most dangerous animals in India.

They inhabit plains or open forests, as well as rocky terrains and wetlands. They’re often found near water and hides in tree hollows, caves, cracks, rock piles, and small dens.

The Indian cobra varies in both colors and patterns – they can be grey, yellow, tan, brown, black or reddish in color. Most of them have the famous dark hood mark, as you can see in the picture below. 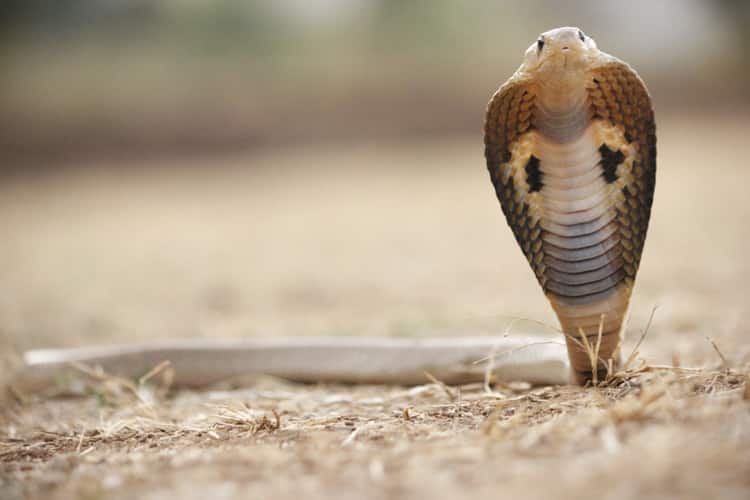 The great hornbill is one of the larger members of the hornbill family. They’re famous for its big size and for its beautiful colors.

The great hornbill likes to eat fruits but can also prey on small mammals, reptiles, and birds. 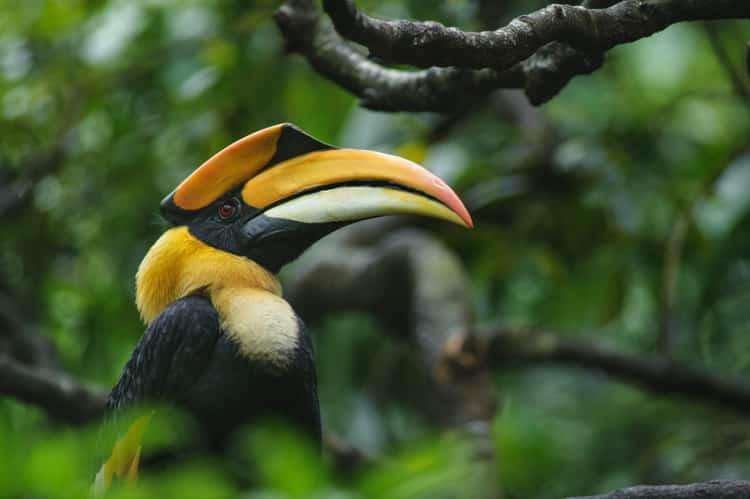 Like many other countries worldwide, there are, unfortunately, endangered animals in India too. Down below you have a list of 10 animals that are critically endangered in India:

Do you have any other questions about animals in India? Leave a comment below!