Want to know more about the animals in Mexico? Here’s a list of 21 Mexican animals that you can see in the wild:

The spider monkey is one of the cutest animals in Mexico and are native to the tropical rainforests and woodland of Mexico. These monkeys are characterized by their black fur, white belly, long limbs and long prehensile tail.

The tail can be up to 89 cm (35 in) long and works like a fifth hand. They use their tails when walking and swinging from tree to tree.

Spider monkeys hang out in groups and are common to be seen in Yucatán, Chiapas, Veracruz and other dense jungle areas. 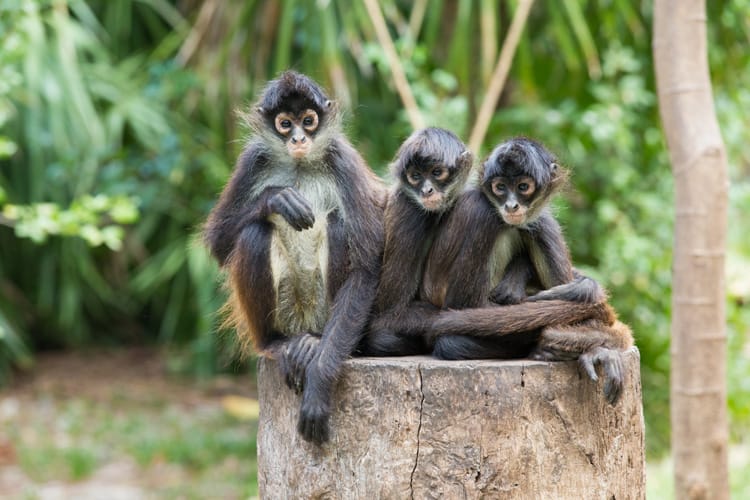 Another cute Mexican animal is the cacomistle. It’s a mammal native to Mexico that lives in the southeastern jungles of the country.

It’s known for its cute appearance that looks like a crossing between a monkey, a cat, and a raccoon.

Cacomistles are nocturnal animals, which means that they’re active during the night. They love to climb in the trees and can be seen jumping from branch to branch during nighttime. 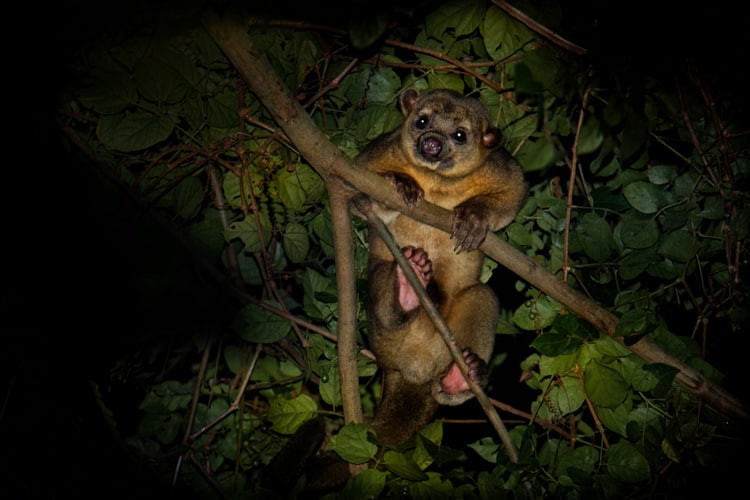 The axolotl is one of the worlds most strange-looking animals. They are amphibians and are known for their ability to regrow their limbs and digits.

They were once eaten as a delicacy in Mexico City, but are now a protected species since they’re in a critical danger of extinction. Today you can only spot them in Lake Xochimilco and Lake Chalco outside Mexico City. 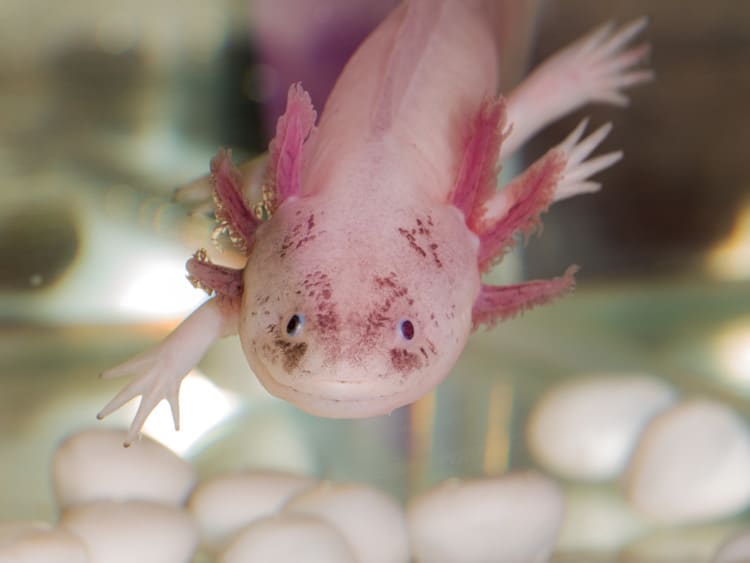 The southern flying squirrel lives in the highlands of Mexico and are known for their ability to glide in the air from tree to tree using their membrane like a parachute. The longest recorded glide was almost 90 meters, which is very impressive.

These medium-sized rodents are omnivorous, which means that they feed on both plants and animals. They eat both fruits, berries, nuts, seeds, insects and eggs. 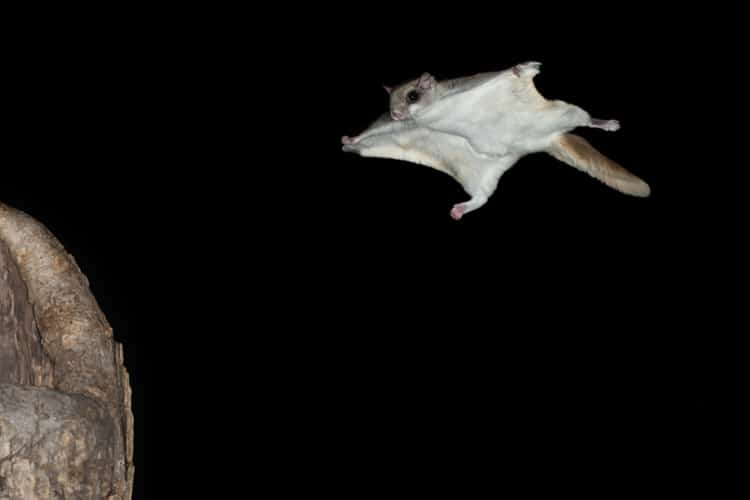 The Mexican prairie dog is not a relative of the dog nor an inhabitant of the prairies. They are actually closer related to squirrels, chipmunks and marmots.

Mexican prairie dogs are native to Mexico and can be found in the northern part of the country. They live in the plains and are mainly herbivores and feed on both herbs and grass. However, they have been seen to eat insects as well.

These gentle giants lives in the waters of Los Cabos in the western part of the country.

It’s the largest fish on the planet and can grow up to 12.5 meters (41 ft) and weight around 20 tons. The whale shark is for sure one of the most magnificent animals in Mexico. 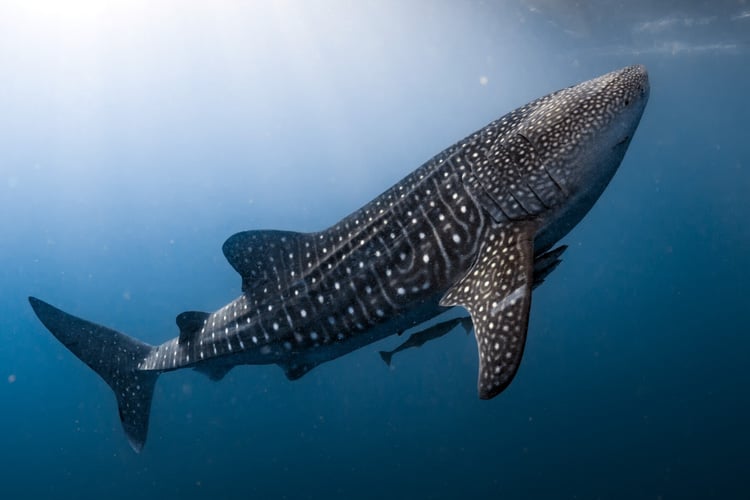 Coati, also known as coatimundi, is a long-nosed animal related to raccoons. They are characterized by their brown fur, long snouts, small ears, and long striped tail.

The coati is a smart animal with strong limbs that they use for both climbing and digging.

Most common places to spot the coati in the wild are in Oaxaca, Campeche, Yucatán, Chiapas, Tabasco, and Quintana Roo. 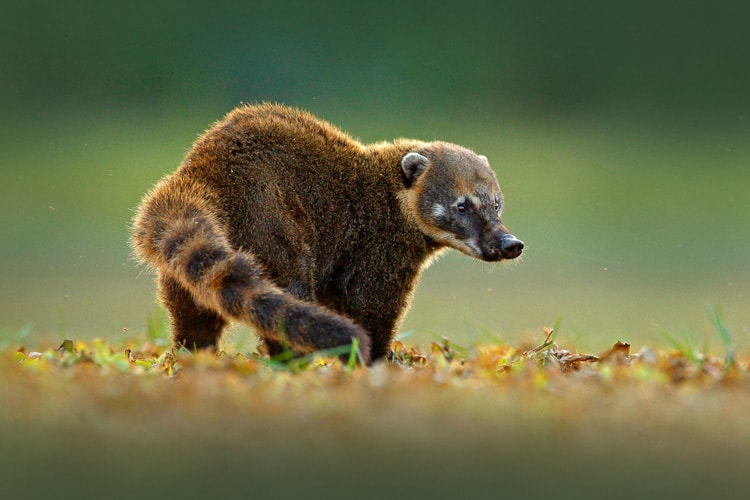 This is no doubt one of the most beautiful animals in Mexico. The ocelot is a medium-sized wild cat that have similar appearance to the jaguar and the clouded leopard.

They are found in the forests of Mexico where they like to sleep in the trees during the day and go hunting at night.

The Mexican Grey Wolf is around the same size as a large domestic dog, but run and hunt in packs and can be incredibly dangerous like other wolf breeds.

Today they’re endangered and live in the northern part of Mexico, close to the US border. 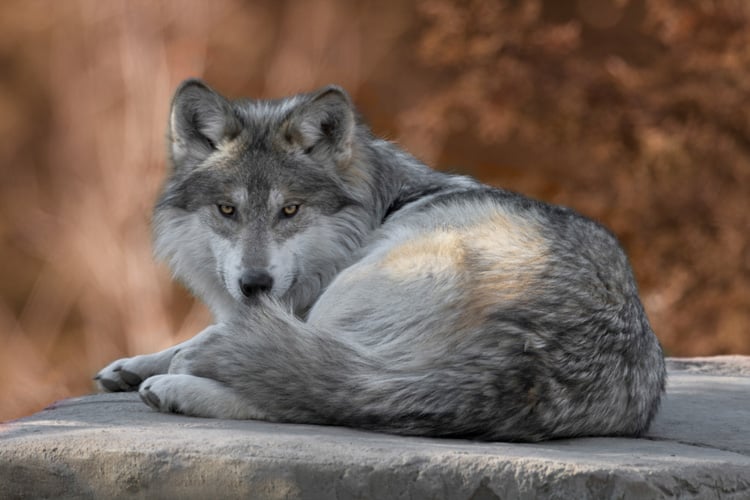 This spices of mockingbird is found in northern Mexico and is known for imitating other birds and human sounds.

They are incredibly intelligent animals who can recognize individual humans who they seem as a threat, but also recognize previous breeding spots and return to areas in which they have had their greatest success in previous years. 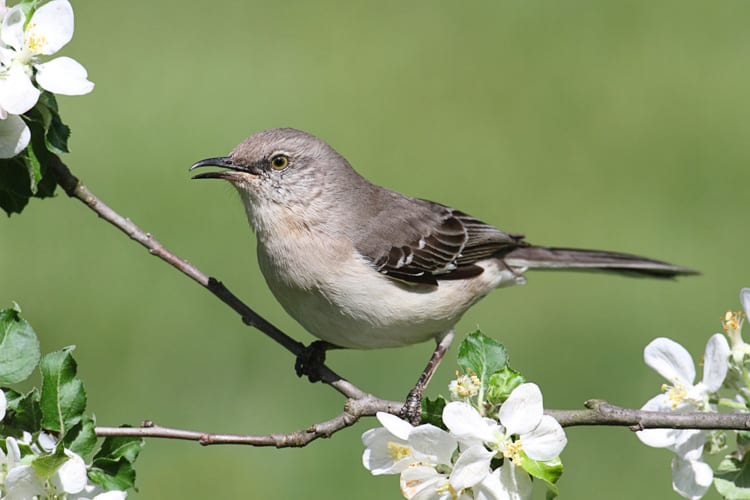 Mexican redknee tarantula is one of the largest species of terrestrial tarantula and are found in the mountain ranges of Mexico. It’s most well known for its hairy body with beautiful red stripes along its legs.

They can grow up to 20 cm in length, but some can grow even bigger. The females are often bigger in size comparing to the males, and the female also tends to be more aggressive.

Another interesting fact about the Mexican redknee tarantula is that they have a relatively long lifespan comparing to other spiders – they can live up to 30 years. 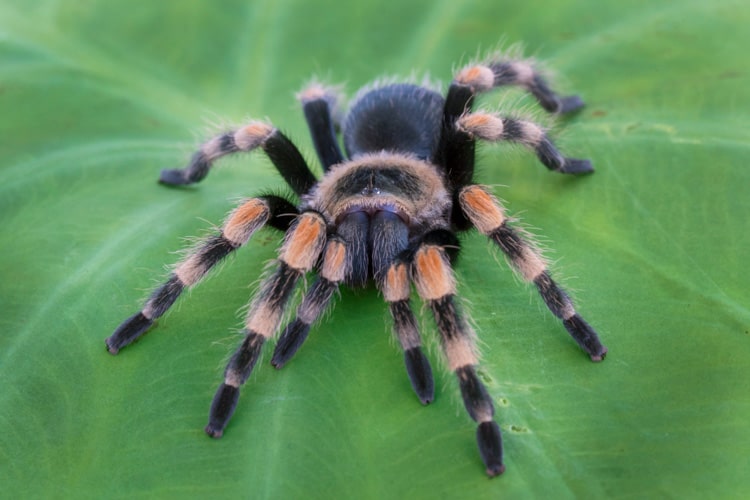 One of the most beautiful birds in Mexico is the Quetzal. It’s a bird native to Mexico that can be found all over the country in wooded areas and humid forests.

The Quetzal is known for its strikingly colored feathers in green and red colors. They are known to be one of the worlds most beautiful birds.

Even though they have bright colored feathers, they can be hard to spot in their natural wooded habitats. 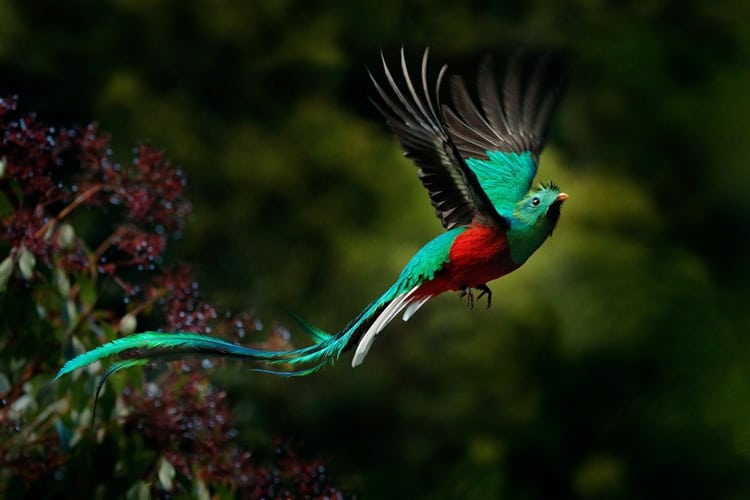 Booby is a marine bird that can be spotted along the western coast of Mexico. However, the most common place to see these birds is on the Galápagos Islands in Ecuador.

They are easily recognizable by their bright blue feet, which makes them to one of the most unique-looking birds in the world. The males displays their beautiful bright-colored feet in a mating ritual by lifting them up and down while strutting infront of the females. It’s very interesting to see. 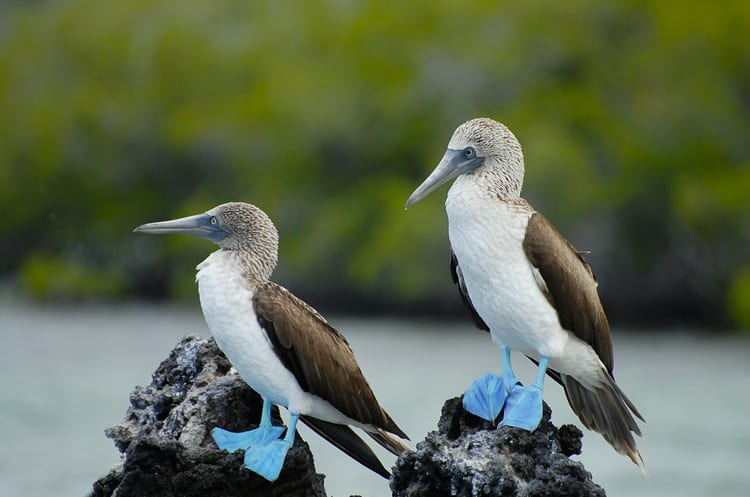 The northern tamandua is a species of anteater that can be found in the tropical and subtropical forests in southern Mexico.

They are medium-sized anteaters with small eyes and ears, long snouts, and a long tail. The northern tamandua can grow up to 130 cm (51 in) in length including the tail, and weight up to 5.4 kg (11.9 lb).

Northern tamanduas are mainly nocturnal, which means that they are active during the night. They spend 40% of their time up in hollow trees for shelter.

They use their claws to rip open wood to find both ants and termites, which is their main food source. Their long tongues are covered in sticky saliva which makes it possible to easily pick up ants and termites. 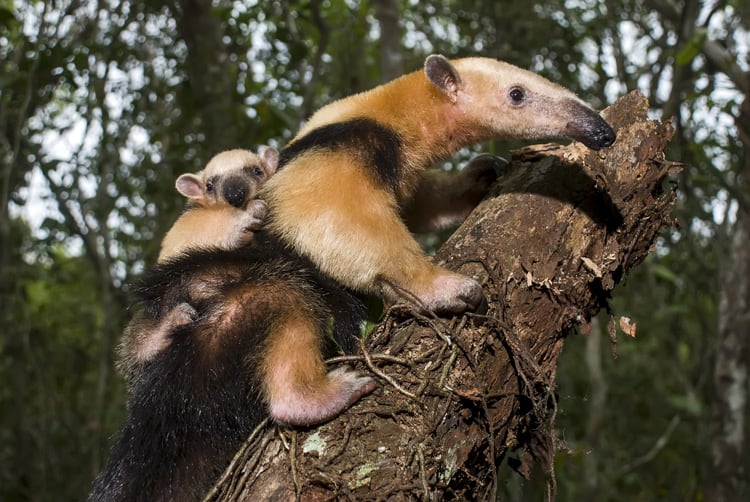 Opossums are small to medium sized animals that can grow to be the same size as a house cat. They are characterized by their long snouts, big ears, and long rat-looking tail.

The animals use the prehensile tail as a fifth limb when climbing, but also to dangle in trees and to carry bunches of leaves or bedding materials for the nest.

An interesting fact about the opossums are that they can mimic the appearance and smell of a dead animal when feeling threatened. When ”playing opossum” they curl up and look very stiff with drawn back lips and bared teeth. Saliva also foams around their mouths and they have closed or half-closed eyes. 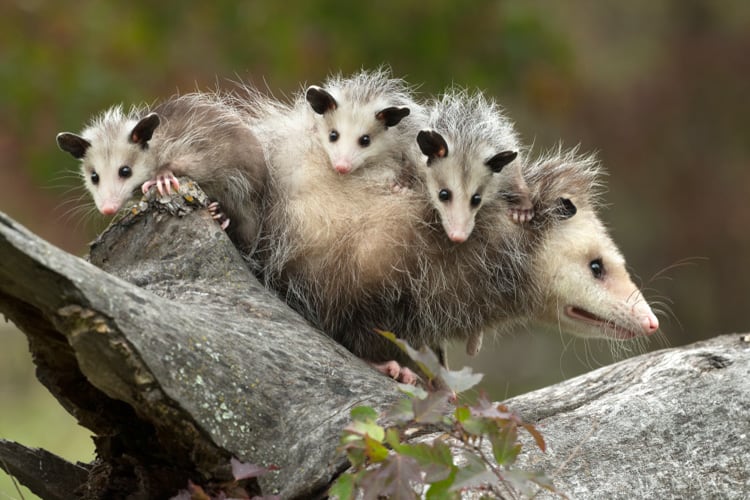 The armadillo is one of the most interesting Mexican animals. It’s an animal that’s famous for its armor that they use when feeling threatened.

They have a hard outer shell that covers their heads, upper parts of their bodies and tail. When feeling threatened they curl up into a hard ball leaving no soft body parts exposed.

Armadillos have poor vision, which makes them quite vulnerable animals in their habitat. Their primary predators include wolves, wildcats, and bears.

However, armadillos are quite fast animals and can reach a top speed of 48 km/h (30 mph), so they often outrun the predators. 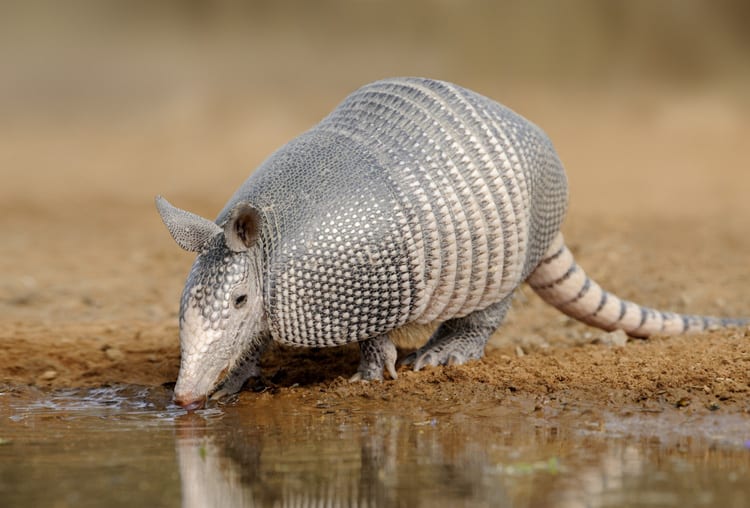 The Mexican burrowing toad is characterized by its bloated body with spots and a stripe along the back. They can grow up to 8 cm (3.1 in) in length and have short powerful legs and a small triangular-shaped head with small eyes.

It’s a burrowing animal, which means that they spend a big part of its life underground. It mainly feed on insects, primarily ants and termites.

The Mexican burrowing toad is known for its loud call. When the male frogs are alarmed or calling, its body becomes inflated looking like a balloon. The call is low-pitched and loud and makes a ”Whooo” sound.

This toad is heard more often than it is actually seen in the wild. In a group they can be heard 1 km (0,6 miles) away.

The Mexican spinytail iguana is a medium-sized lizard native to Mexico and Central America. They can grow up to 1.3 m (4.3 ft) in length and have distinctive scales on their tails, which have given them the “spinytail iguana” name.

They are excellent climbers and prefers to stay in rocky landscapes with warm rocks to relax on and nearby trees to climb on.

Mexican spinytail iguanas can move fast if being chased by a predator, but also whip the predator with their tails and bite if they must. 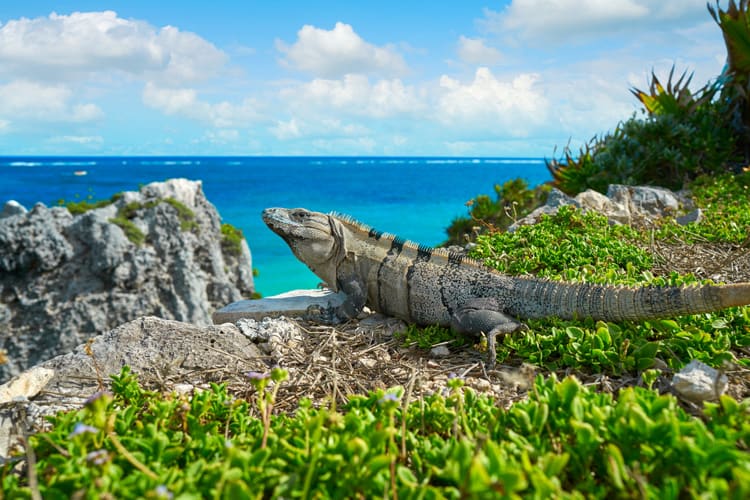 The jaguar is a species of cat that lives across Mexico all the way down to northern Argentina in South America. In Mexico, they can be spotted in the Sian Ka’an Biosphere Reserve.

This is one of the largest cat species in the world, and can grow up to 1.85 m (6.1 ft) including the tail. They have short and powerful legs that they use for climbing, swimming, and crawling.

After the lion and tiger, the jaguar has the third highest bite force. Their jaws are extremely powerful with sharp teeth that can pierce the shell of armored reptiles and turtles. 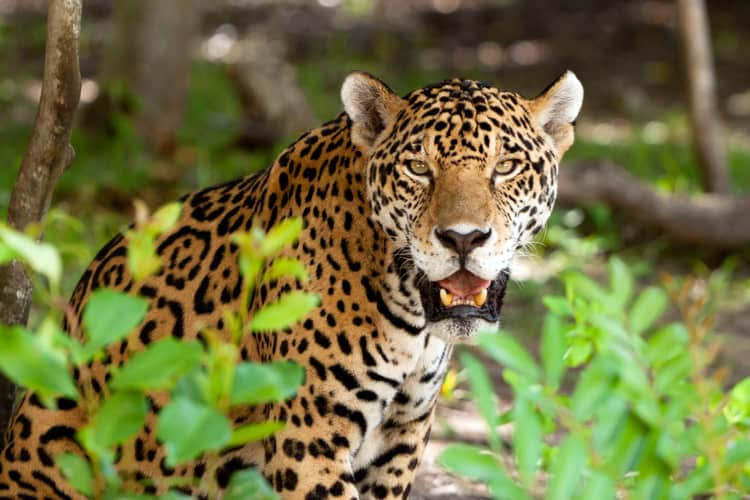 The West Indian manatee is the largest member of aquatic mammals, which includes the dugong.

Manatees are mammals and therefore they breathe air, have warm blood, and produce milk. However, they have fully adapted to aquatic life, so they have no hind limbs. Instead of hind limbs they have a spatula-like paddle that they use to move around in the water.

They are herbivores and feeds on vegetation 4-8 hours per day. They consume about 5-10% of their own body weight every day.

American black bears are smart animals and have been seen opening screw-top jars and opening doors of both cars and houses.

Mexico’s high mammal biodiversity reflects the wide array of landscapes and climates. In Mexico you can find both tropical rainforests, temperate deserts, alpine tundra, and montane forests – so no wonder why there are so many mammalian species and subspecies.

Mexico is one of the countries that has some of the most beautiful and interesting animals in the world, which makes it such an attractive destination.

In addition to the 21 animals listed below, there are hundreds of more animals that you can spot in the Mexican wilderness.

What is Mexico’s national animal?

Are there any dangerous animals in Mexico?

Since Mexico has a large biodiversity, it also means that they are home to some of the most deadliest animals in the world. Below you have a small list of the most dangerous animals in Mexico:

Do you have more questions about the wild animals in Mexico? Leave a comment below!