Want to know more about Danish food and cuisine? Denmark is a country that has a lot to offer when it comes to food. Here they have some really delicious dishes that are loved by the locals, as well as the tourists.

Down below you can read more about Danish food and its traditional dishes:

Frikadeller is a type of Danish meatballs and is made of pork (sometimes mixed with beef), eggs, milk, flour, and onions.

They’re fried in butter or oil, and served potatoes and parsley sauce. Frikadeller is also popular to eat cold with some remoulade sauce. 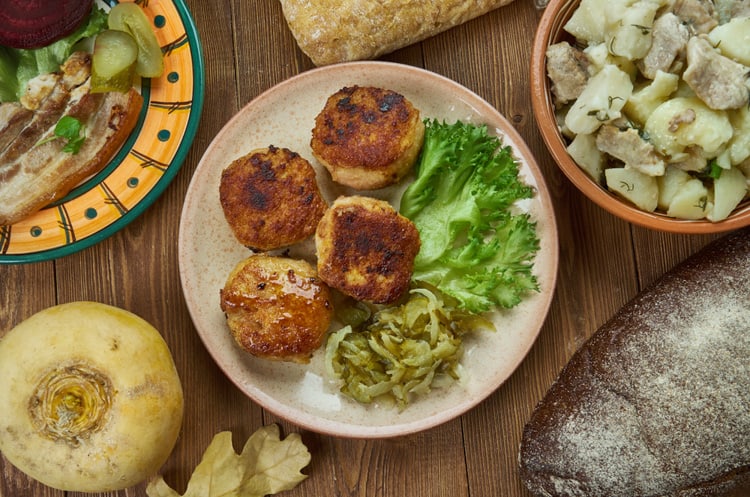 Aebleflæsk, also known internationally as apple pork. It’s a classic Danish food that’s been around since the middle of the 18th century.

Aebleflæsk is made of pork, apples, onions, sugar, and butter that are mixed together to get that special flavor. 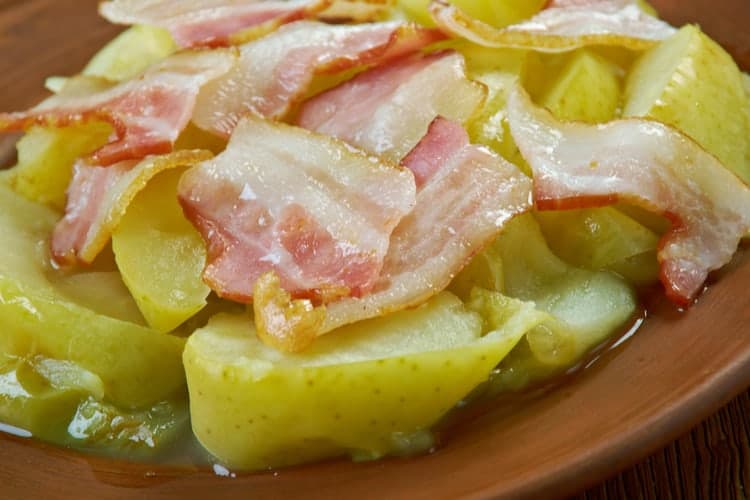 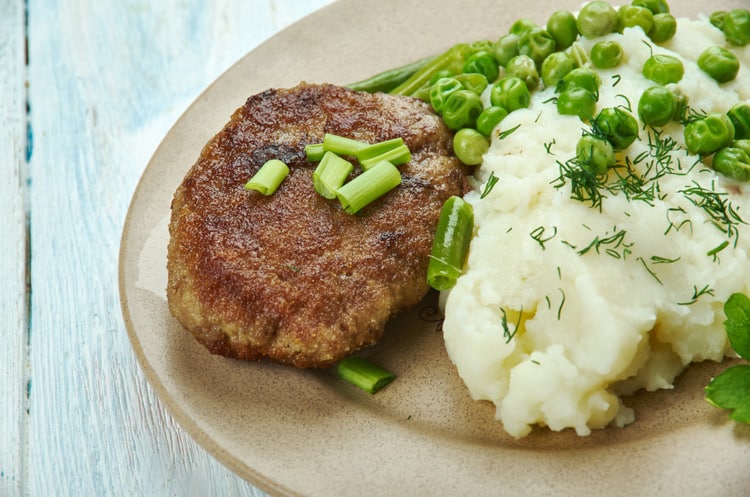 One of the most loved dishes in Denmark is Flæskesteg. It’s Danish roasted pork that’s used is several recipes around the country.

It’s salty, crispy and has a smell of dried bay leaves.

At the Christmas markets this dish is served in a sandwich with vegetables and remoulade or mayonnaise sauce. 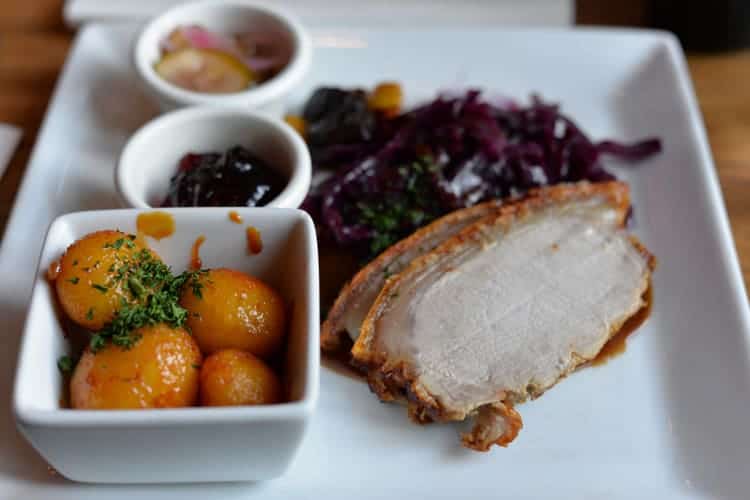 It’s a classic dish in Denmark and is sometimes made with bacon and mozzarella cheese for some extra taste. Some people like to add cayenne pepper as well to add a little spice to this dish.

Mørbradbøffer is served with mushrooms, fried onions, salad, and potatoes. 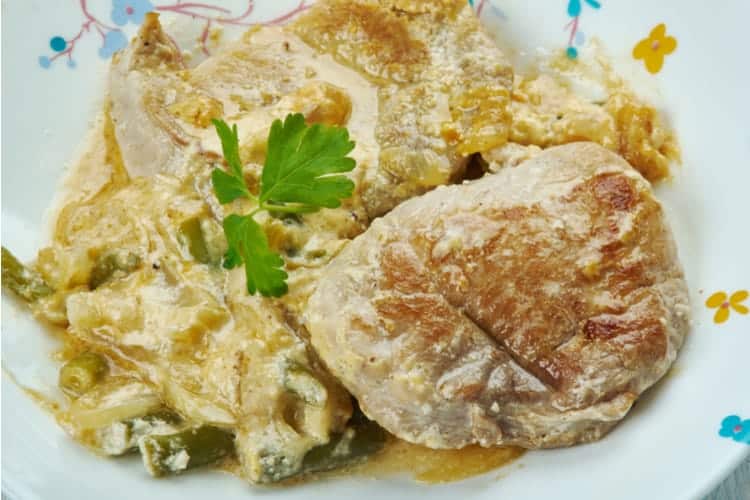 When it comes to Danish food, you simply have to eat a rød pølse. It’s one of the most classic street foods of Denmark and can be found all over the country.

Rød pølse means “red sausage” in the Danish language, and is a local sausage that the locals eat together with bread, mustard, ketchup, and fried onions.

Normally you don’t put the rød pølse in the hot dog bread and eat it like a normal hot dog. Instead you dip both the bread and sausage in the mustard, ketchup, and fried onions.

However, this is the most traditionally way to eat it, but you’ll find places they serve them in the bread as well. 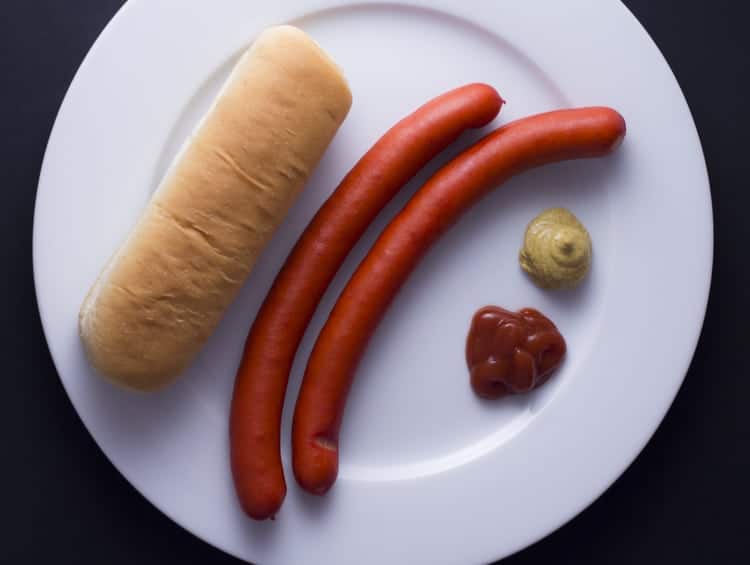 Medisterpølse is another type of sausage that’s popular in Denmark. It’s a thick sausage made of minced pork and lard, seasoned with onions, allspice, cloves, salt and pepper.

This sausage is typically severed with mashed potatoes, parley, and pickles. 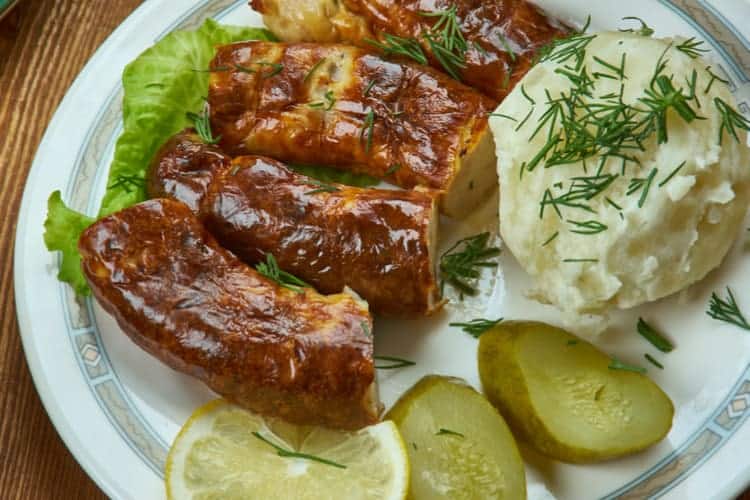 Hønsekødssuppe is a traditional soup from Denmark. It’s made from a flavorful chicken broth, vegetables, and small pork or beef meatballs. Usually seasoned with fresh herbs such as parsley and thyme.

Hønsekødssuppe is a healthy Danish dish that’s a stable in many restaurants around the country.

Rugbrød is a popular typ of dark rye bread in Scandinavia. If you haven’t tasted this bread before, make sure to do it when you’re in Denmark. It’s simply delicious.

Smørrebrød is an open-faced sandwich that has become one of the most popular dishes in the country. Back in the days it used to be something the poor people ate, where they made sandwiches of leftovers.

Today you can eat more luxurious Smørrebrød with all different kinds of ingredients and toppings.

It usually consists of local dark rye bread with a thin layer of sauce, some fish or meat, and fresh vegetables and herbs.

This is a dish that Danes eat for both breakfast, lunch, and dinner, and can be found at most restaurants in Denmark. Smørrebrød is a must to add to your Danish food bucket list!

Cripsy pork with parsley sauce and potatoes is a must to taste if you want to eat some local Danish food. It’s a simple, but delicious dish that is just as loved by the tourists as the Danes.

It’s a local dish that’s made of bacon and mashed potatoes.

The Danish cuisine have roots that goes back all the way to the Viking Era. Back then the Danish food recipes was made to protect the local people against the cold weather conditions. That’s why they eat lots of meat, potatoes, and vegetables.

Danes usually eat three meals per day and a snack. They have breakfast (morgnmad), lunch (frokost), dinner (aftnsmad), and a snack (mellemmåltid).

Random fact: Denmark is one of the most pork eating countries in the world.

What’s the national dish of Denmark?

What is a traditional meal in Denmark? 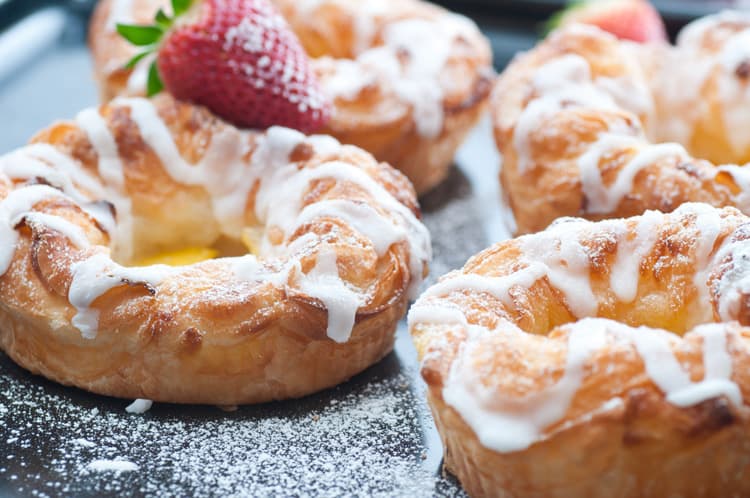 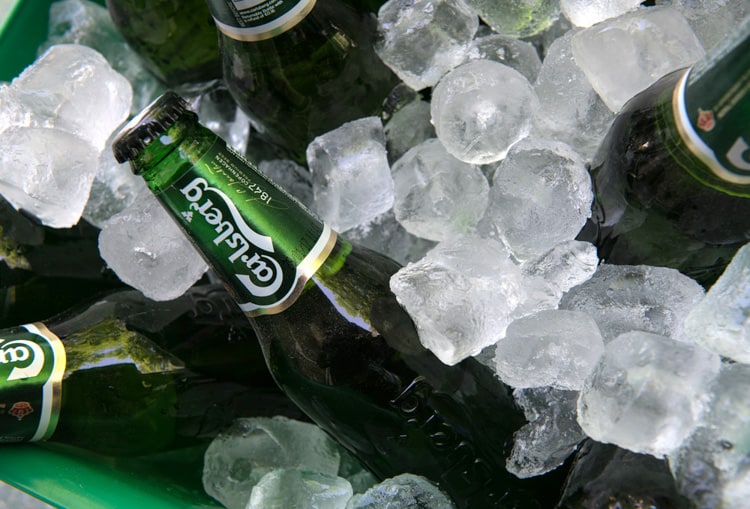 The dishes varies from family to family since they all have their own traditions and favorite dishes. 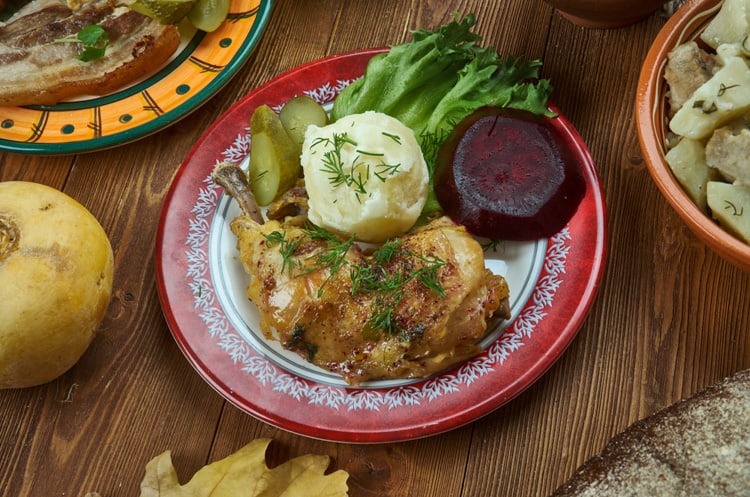 Do you have more questions about Danish food and cuisine? Leave a comment below!