Want to know more about German food and cuisine? Germany is a country full of delicious dishes with interesting flavors. There are so much more beyond the well-known German sausages, sauerkraut, and beer.

Sauerbraten – The National Food of Germany

Sauerbraten is a roast beef stew made of tender beef marinate in vinegar and spices, often for several days. It’s traditionally served with red cabbage and potato dumplings (Kartoffelkloesse) or boiled potatoes.

It’s a local favorite as well as one of the national dishes of Germany. This is one of the German dishes that you can eat at many restaurants around the country. 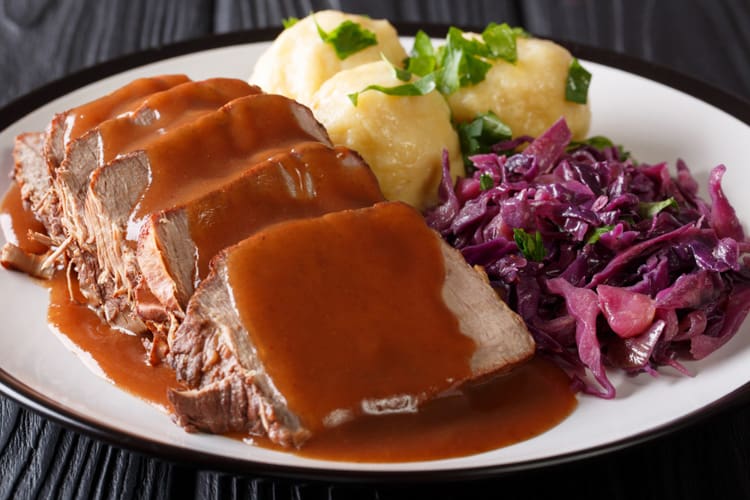 When it comes to German food, Bratwurst is a classic dish to try. This is the most popular wurst (sausage) dish to eat in Germany.

Bratwurst is made from ground pork and spices such as caraway, coriander, ginger, and nutmeg. It’s then fried or grilled and served in a bread roll with ketchup and mustard, or together with some mustard and sauerkraut. 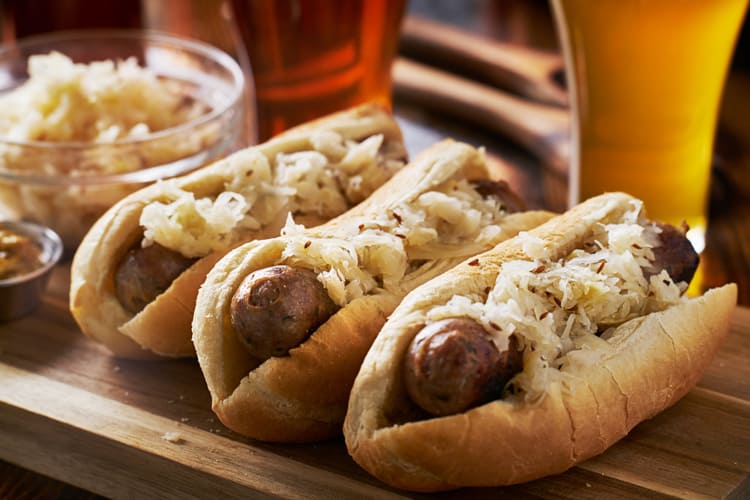 Käsespätzle is a German dish made with soft egg noodles. The noodles are made from wheat flour, eggs, and salt, and is served with lots of melted cheese.

This dish is vegetarian and is often served as a side dish to meat dishes, but can be served as a main dish as well.

Rouladen is another classic dish in the German cuisine. It’s thinly sliced meat (usually pork or veal) wrapped and filled with chopped onions, pickles, mustard, and bacon or pork belly. 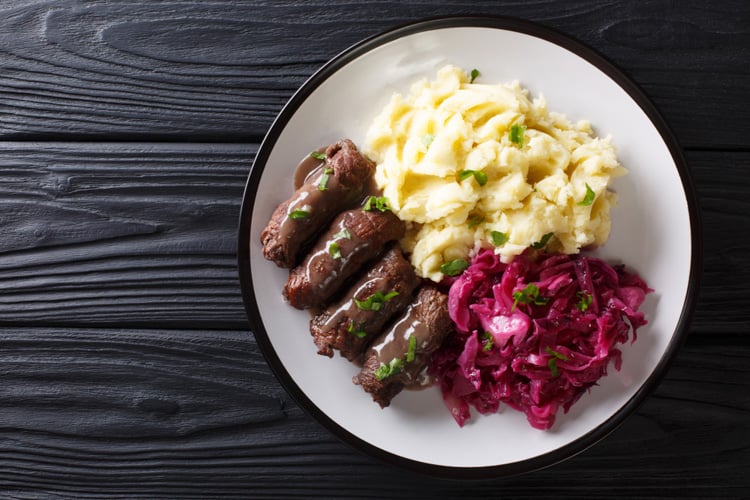 Currywurst is another classic when it comes to German sausages. It’s a common street food and is just as loved among the locals as among the tourists.

This German food is traditionally made with pork and served with a sauce made from ketchup and curry powder. You often get some French fries or plain white bread served with your currywurst as well.

Currywurst is such a popular German dish that there’s even a museum in Berlin dedicated to it. 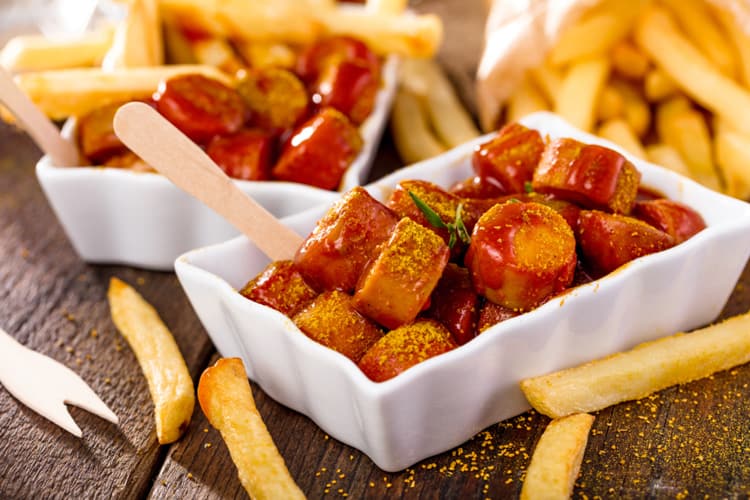 Around the mid of April to the end of June it’s asparagus season in Germany, also known as ”spargelzeit”. Spargel is the word for asparagus in German.

It’s not exactly a German dish, but the way it’s served is very much German.

During this season you will see spargel on the menu everywhere. The white asparagus is traditionally served with Hollandaise sauce, ham, and potatoes. 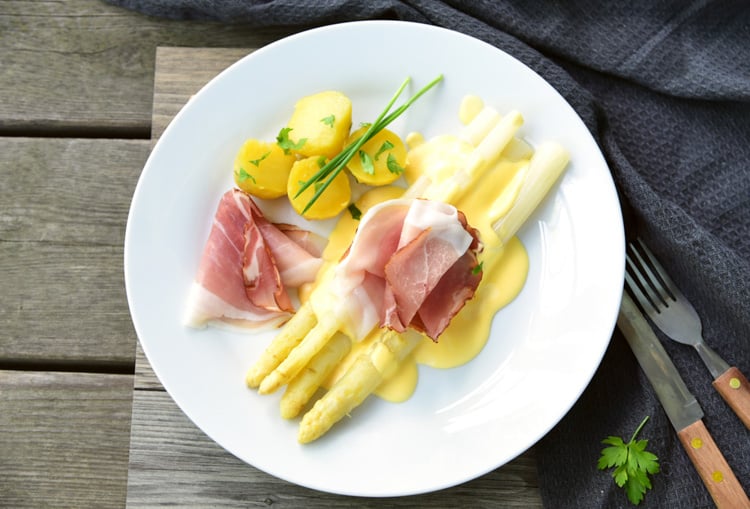 Schnitzel is actually an Austrian dish, but it still deserves a spot on this list since it’s so popular in Germany.

This dish is made of a cutlet filled with ham and cheese, coated in breadcrumbs. It’s served with lemon and parsley potatoes. 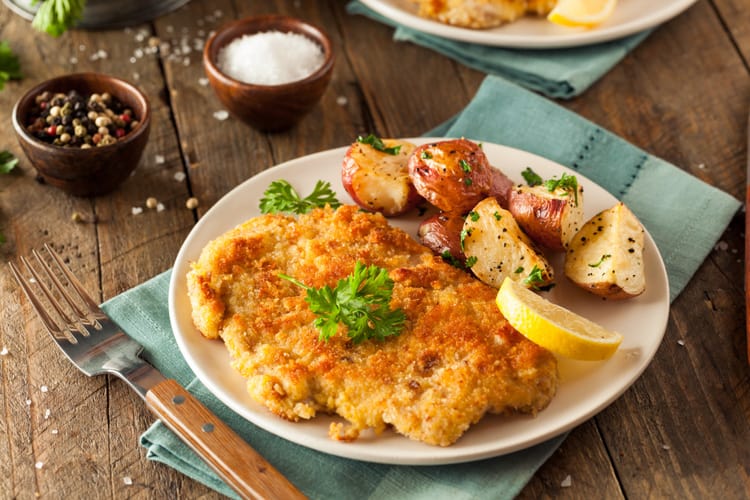 Eintopf is a traditional German stew made of broth, vegetables, pluses or potatoes, and meat (pork, chicken, or beef).

It’s made differently depending on the region you’re in. For example, in Thüringen it’s made with lentils, and in Kassel it’s called lumpen und flöh (rags and fleas) and is similar to an Irish stew.

However, it’s a local favorite and one of the most traditional German dishes. 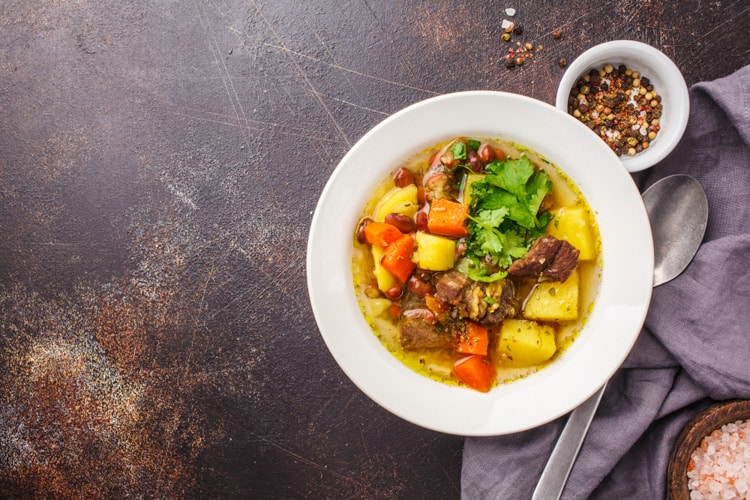 The German people sure loves their potatoes, so I just had to include this dish in this list of German food.

Kartoffelpuffer is a fried potato pancake made from mashed or grated potatoes mixed with eggs, onions, and parsley. It’s shaped circular and then deep fried.

You can enjoy this as a side dish to a main course of meat or fish, or even as a dessert with some apple sauce, sugar, blueberries and cinnamon. 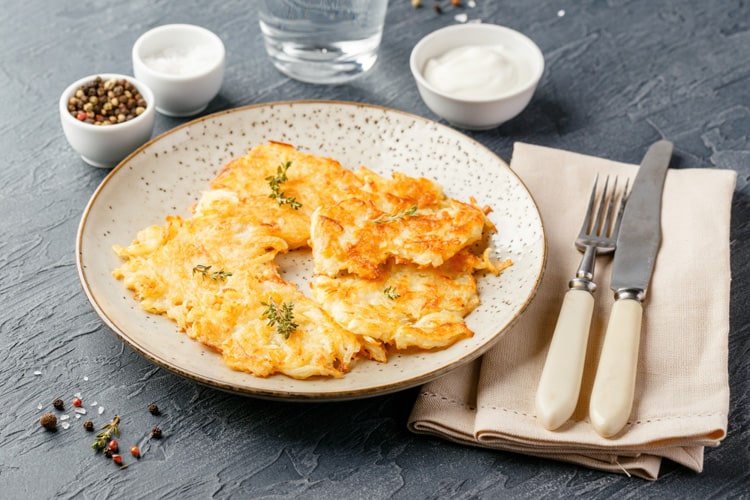 Maultaschen is another traditional German dish similar to ravioli. It consists of an outer layer of pasta dough filled with minced meat, smoked meat, spinach, bread crumbs, and onions.

It’s flavored with various spices and herbs, and cooked in boiling water or in a broth.

This is a traditional dish of the Swabian region, so if you happen to be in the neighborhood, make sure to try this dish! 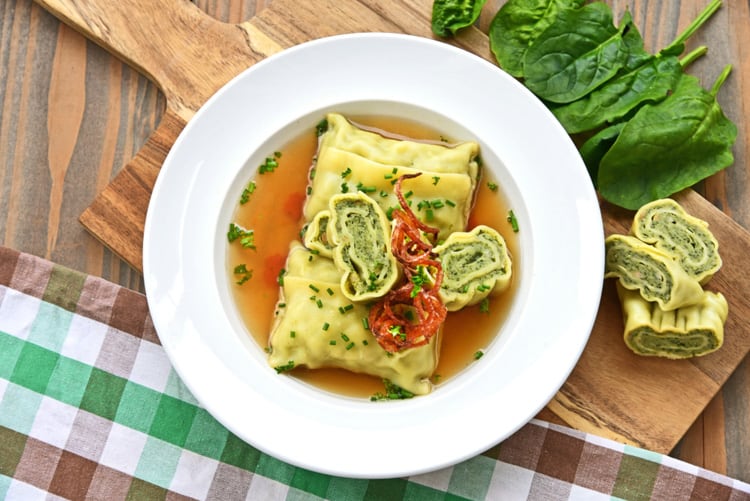 Sauerkraut is fermented cabbage and is something that you’ll see often in the German cuisine. It’s one of the most popular foods in Germany, and a must to taste while you’re in the country. 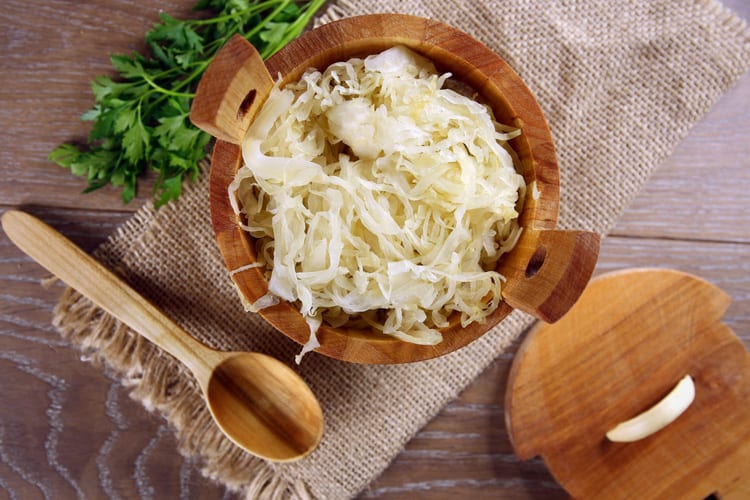 The Brezel, also known as the pretzel, is a German bread baked with salt.

It’s one of the most traditional snacks to eat in Germany, and you can find it in most supermarkets and bakeries.

I can recommend to buy it from a bakery in the morning, or supermarket like Lidl, then you’ll have it freshly baked! 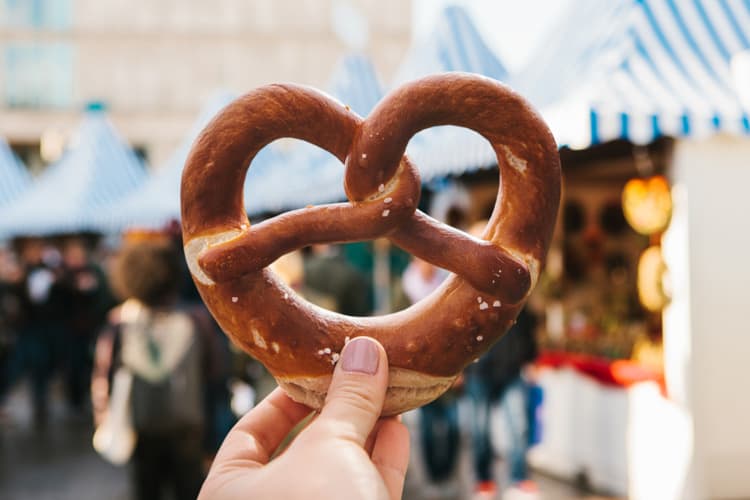 The German cuisine goes long back in history and varies depending on the region.

But, one thing that most Germans have in common is their love for potatoes, cabbage, and meat. The most German dishes include these three ingredients.

What is the national food of Germany?

Sauerbraten is the national dish of Germany.

What is a traditional German meal?

Other dishes from Germany 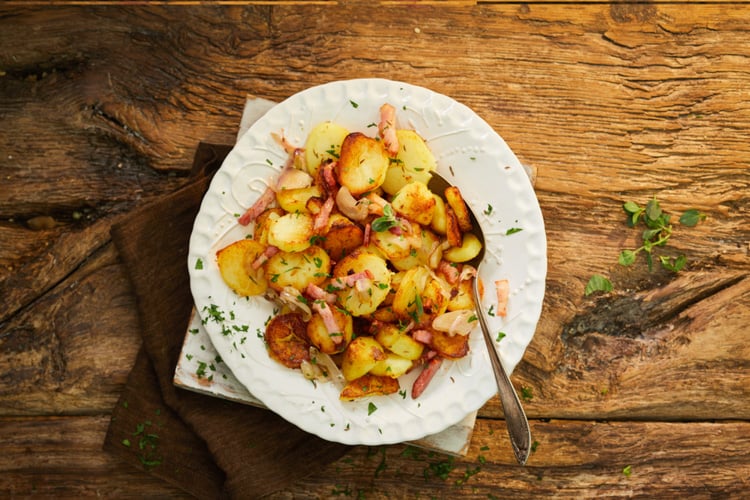 Germany is a country that has a lot to offer for those who love sweets. You can eat classic apfelstrudel and schwarzwälder kirschtorte to more unusual sweets like schneeball and käsekuchen.

Below you have recommendations on 10 German desserts to taste in Germany: 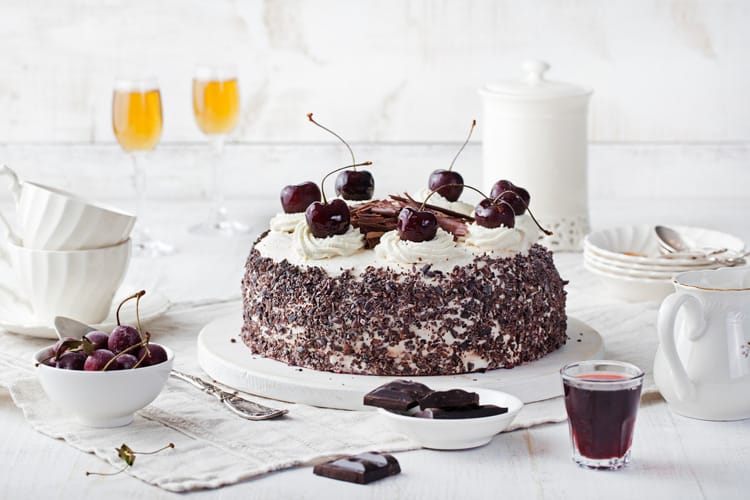 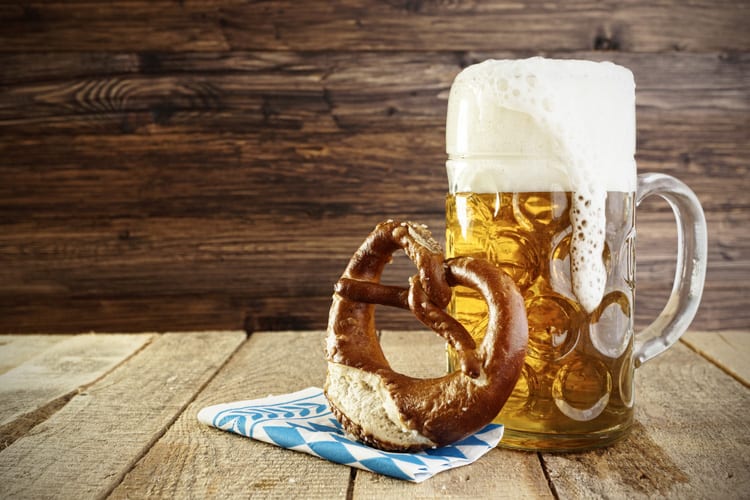 If you’re planning to visit Germany during Christmas it can be fun to try some of the German Christmas food.

In Germany the Christmas food depends on the region and family traditions. But some common items to have on the Christmas table are; rabbit, goose, duck, and a roast. 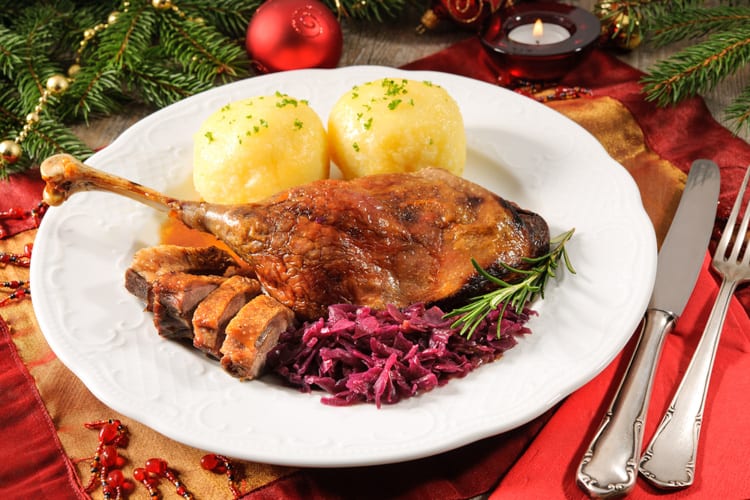 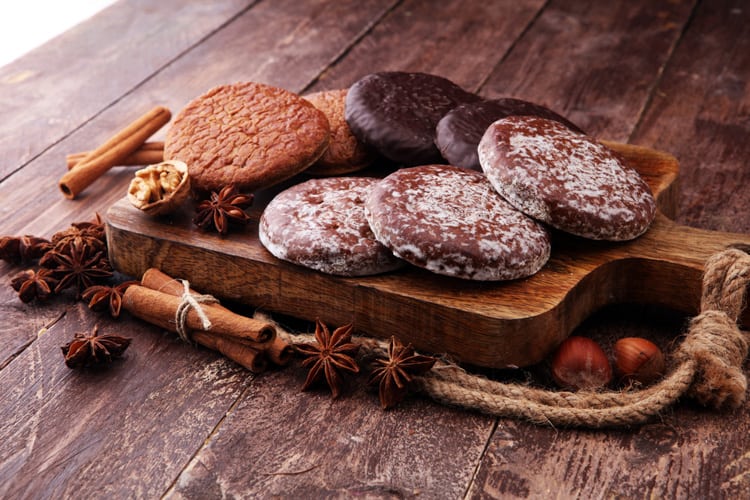 Do you have more questions about German food and cuisine? Leave a comment below!