12 Greek Desserts and Cakes to Taste

Greece is a country that’s known all over the world for its delicious food. But have you ever heard about Greek desserts?

In Greece there are a variety of desserts that you can taste during your stay. From famous desserts like baklava and halva to crunchy cookies and a variety of delicious cakes. Down below you can read more about Greek desserts and sweets to taste in Greece:

Bougatsa is a pastry that the Greeks like to eat for breakfast. In the bakeries of Greece you’ll find a variety of flavors ranging from savory with cheese and meat to sweet bougatsas with custard, cinnamon, and powdered sugar.

Even though most locals like to eat this for breakfast together with a cup of Greek coffee, it’s just as delicious as a sweet dessert after dinner. 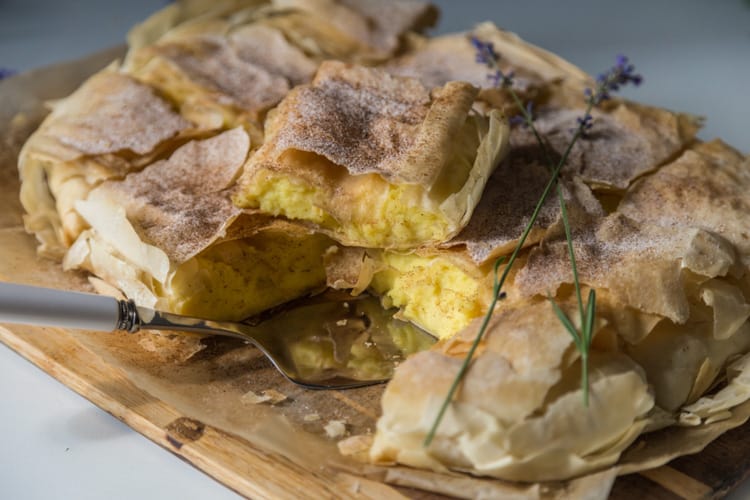 Halva is one of the most popular Greek desserts and is made with semolina and sweet syrup, and is topped with both nuts and raisins.

There’a actually two versions of halva in Greece, and the other one is made with tahini and is also popular throughout the Middle East and North Africa. 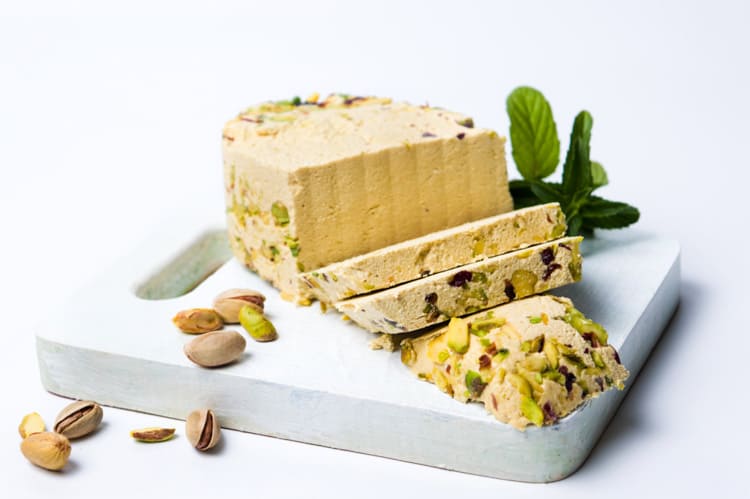 These cookies are classics when it comes to Greek desserts. It’s soft cookies made of flour, olive oil, honey, and chopped walnuts. They’re flavored with orange and cinnamon and drenched in a sweet syrup.

It’s a cookie the locals eat during Christmas in Greece. So if you happen to be around during that time of the year, you should taste one. 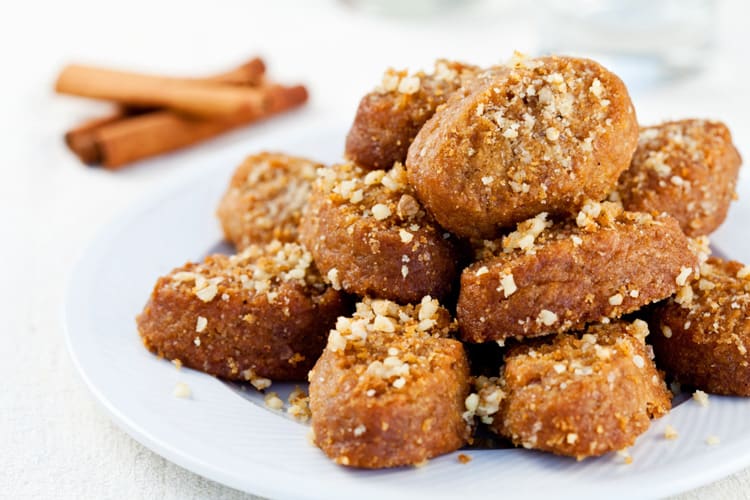 The Galaktoboureko is a Greek pastry made of layers of phyllo dough, butter, and creamy custard. It’s baked in the oven and then drenched in a syrup infused with lemon and orange.

It’s a delicious Greek dessert, so make sure to taste it if you see it on a menu in a café or bakery. 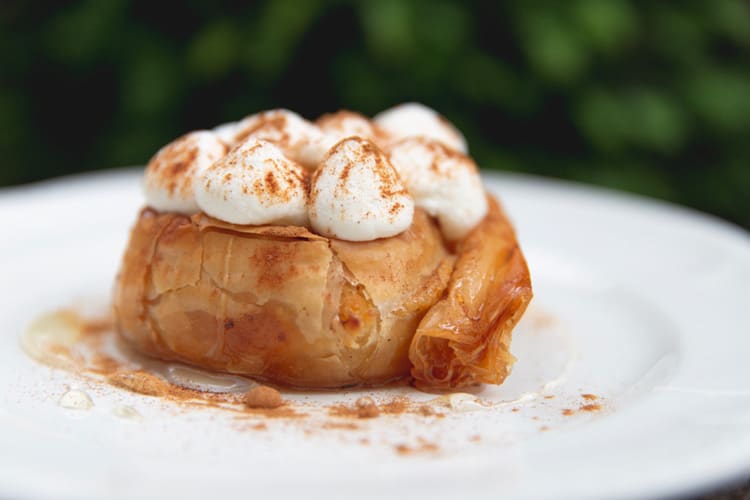 Kataifi is another pastry made of phyllo dough, but is shredded to give the dessert its beautiful texture.

The filling can vary depending on where you taste it. The phyllo dough is wrapped around a sweet filling made of either chopped walnuts, pistachios, or almonds.

After being filled and wrapped, this Greek dessert is soaked in a sweet syrup infused with cinnamon and ground cloves. 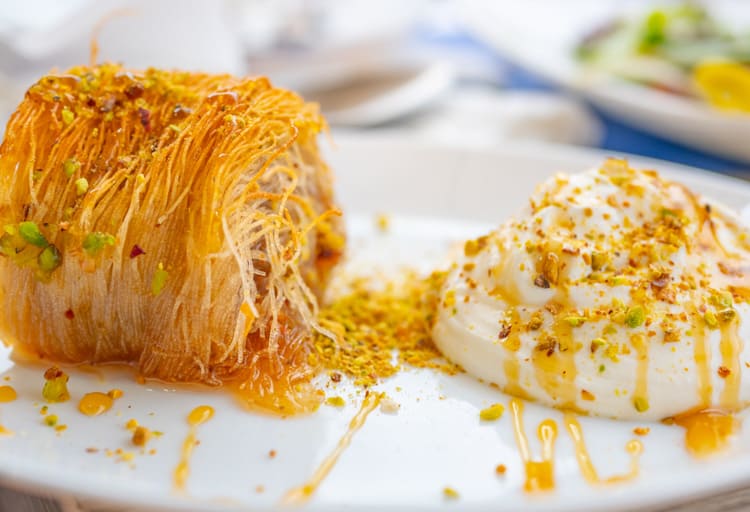 Baklava is one of the most popular Greek desserts. It’s made of layered phyllo dough filled with nuts, honey or sugar, and cinnamon. Common nuts to use in this dessert are almonds and pistachios.

It’s a crunchy and sweet dessert that anyone with a sweet tooth will like. 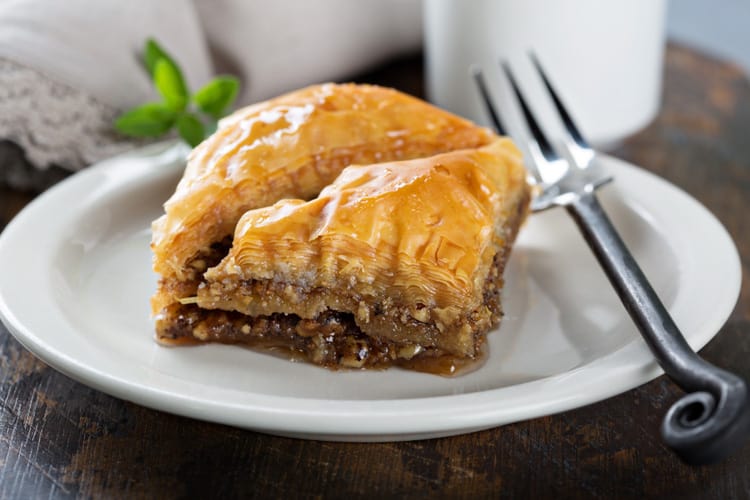 This cake comes from the Greek island of Crete, but is today popular to eat all over the country. It’s one of the Greek desserts that you need to taste during your stay in the country.

It’s a fluffy and flavorful cake made with phyllo dough and spiced with both orange and cinnamon. When ready, the Portokalopita cake is served with some Greek yoghurt on the side. It’s really yummy.

Loukoumades is probably my favorite Greek dessert. It’s small balls made of fried dough (similar to doughnuts) that are dipped in sweet syrup or chocolate. They are usually served hot and sprinkled with some chopped nuts.

This is one of the Greek desserts that you can find all over the country, especially at markets and festivals in Greece. They are crispy, juicy, and will make your tastebuds happy. 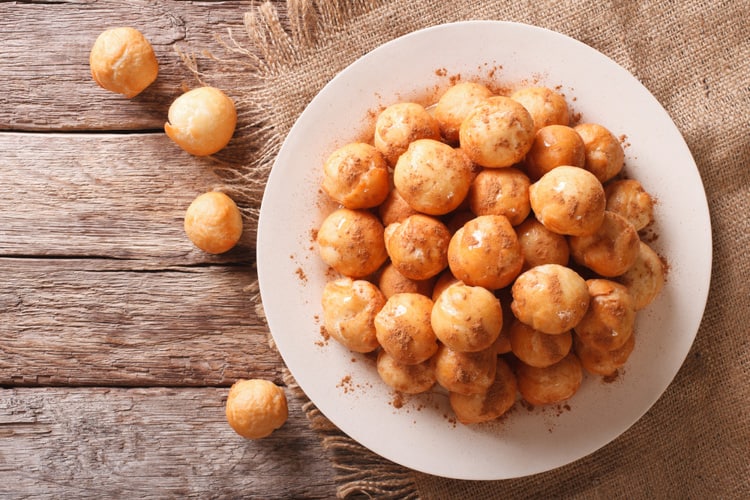 This is another cookie that the locals eat during Christmas, but can be bought all year round in some bakeries.

Kourabiedes are buttery shortbread cookies made with local almonds. They are very popular among the locals and are served heavily dusted with powdered sugar.

Diples are crispy folded dough sheets that have been fried in oil and dipped in a sweet honey syrup.

It’s a simple but sweet dessert with a crispy texture. These sweets are normally eaten after a meal or during the day as a snack. 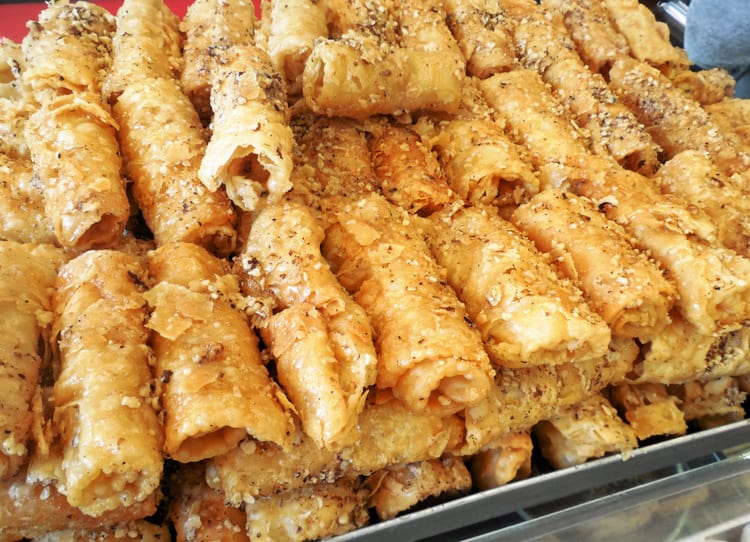 The Greek honey pie Melopita is a mix between cheesecake and custard. It’s traditionally made with soft myzithra cheese, eggs, honey, lemon, sugar, and flour. Some of these cakes are also made with ricotta cheese, if the myzithra cheese is not available.

It can be made in a variety of ways. Some make it like a pie with a bottom or top crust, some like a tart, and some like to make it without the crust completely. Either way its made and served, you’re in for a treat because this is one of the most delicious desserts in Greece. 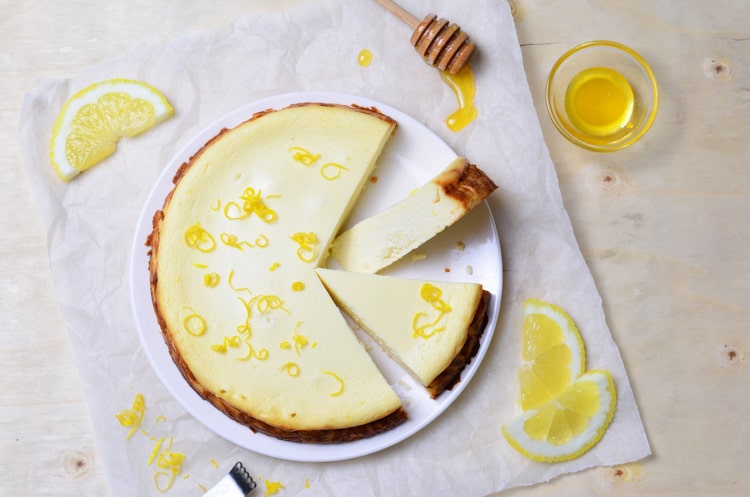 Revani is an Ottoman dessert that’s common to eat in Greece. The dessert is made from semolina, sugar, flour and flavored with vanilla, lemon or rose water.

The cake is very sweet since it’s soaked in a sweet sugar syrup after it has been baked in the oven. It’s usually topped with almonds, coconut, pistachio nuts, fresh fruits or whipped cream before being served. 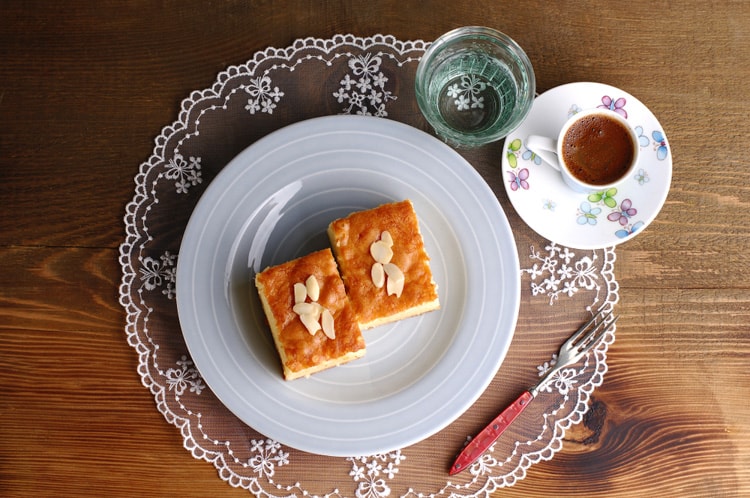 The Greek cuisine is strongly influenced by the Ottoman cuisine, and is known all over the world for its delicious Greek food and sweet desserts.

Greek desserts are both sweet and filling. They usually use ingredients like honey, nuts, fruits, and cream in their recipes.

Do you have more questions about Greek desserts? Leave a comment below!