Want to know more about Icelandic food and cuisine? Iceland is a country that’s well known for its beautiful nature and landscapes, but have you ever heard about the Icelandic food?

In Iceland there are several dishes that you can try for a local experience. From delicious lobster and homemade bread to unusual dishes such as fermented shark and dried fish jerky.

There are so many new and interesting flavors to discover in Iceland. Here are 12 traditional dishes that you can taste in Iceland for a local experience:

Kjötsupa is a traditional Icelandic food, loved by both the locals and tourists. It’s a soup made from lamb and a variety of local vegetables and herbs.

This is a common dish to eat during the cold winter months in Iceland. 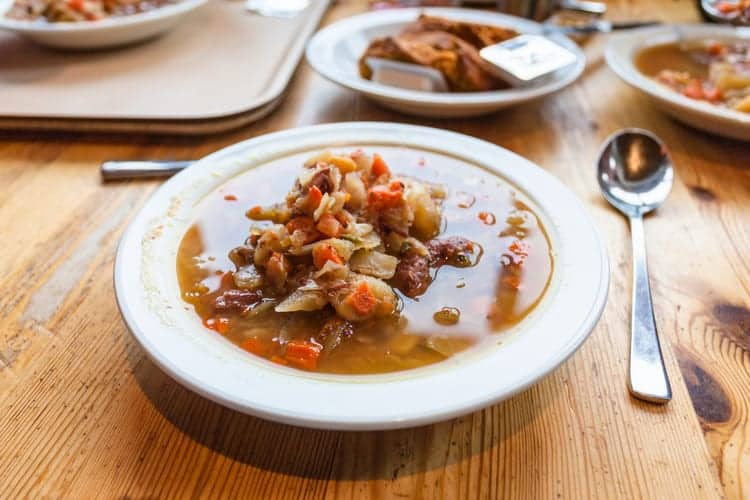 Plokkfiskur is a fish stew made from cod or haddock fillets. It’s a mix of fish, potatoes, onions, and béchamel sauce. 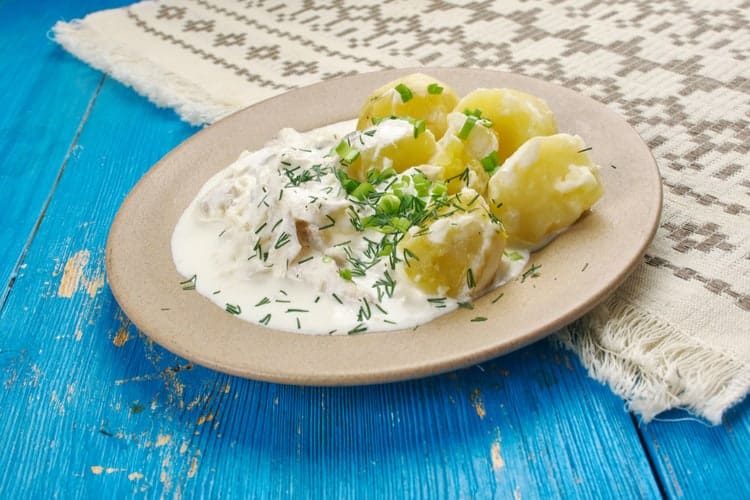 Hardfiskur has been a staple in the Icelandic cuisine for centuries. It’s made of dried fish, mostly cod or haddock, served with Icelandic butter.

It’s not so popular among the tourists, but the locals love it! 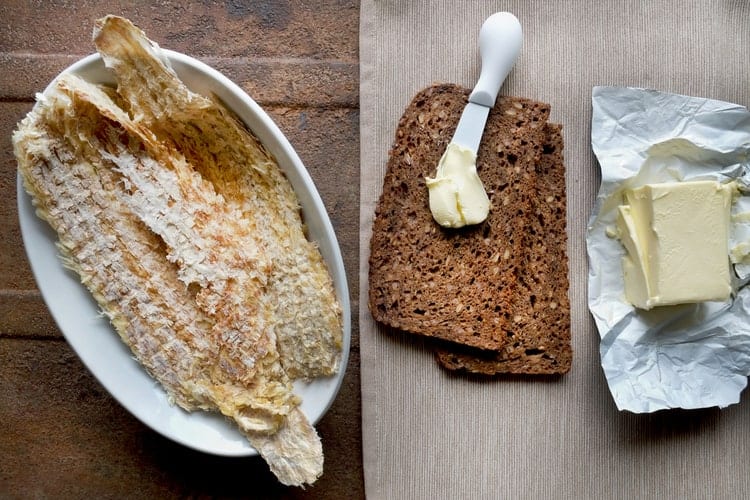 Hot dogs, also known as pylsur, might not be one of the most traditional things to eat in the country. But, they are in fact very common as a fast food, and therefore they deserve a spot on this list.

Hot dogs are considered to be cheap in most countries, but in Iceland they are quite pricey.

In Iceland a hot dog costs around 7 USD, which is crazy expensive comparing to the 1-2 USD price we have in Sweden. 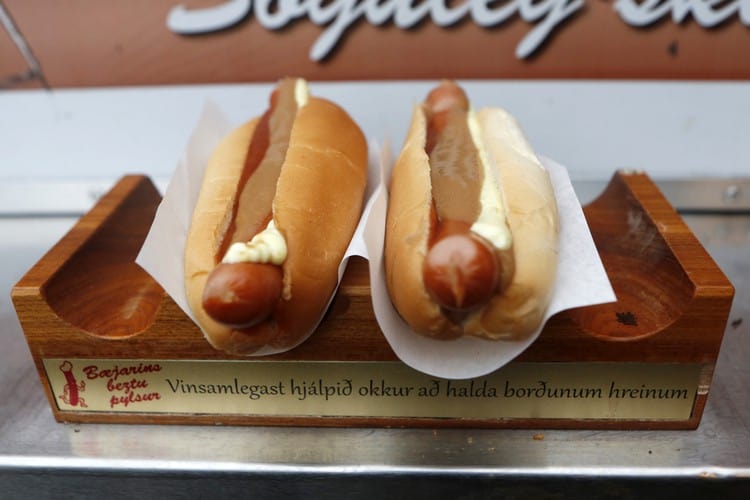 Skyr is not a dish, but is one thing that you have to taste while you’re in Iceland. It’s a yummy yoghurt made in Iceland that can be bought in every supermarket.

Skyr is simply delicious and come in various flavors such as pear, vanilla, and berries. 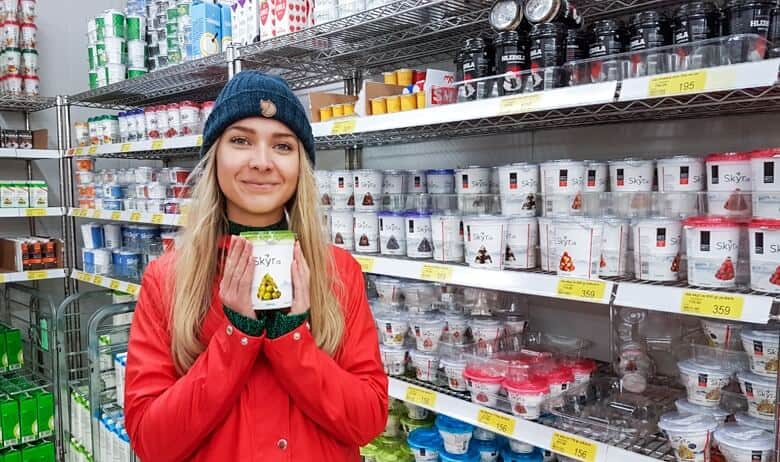 Svid is a traditional dish of Iceland that’s made of a sheep’s head. The sheep’s head is cut in half, boiled, and served with potatoes.

I know that this might sound and look disgusting, but personally, I think it’s good that they use all the parts of the animal. In many countries they just throw it away. 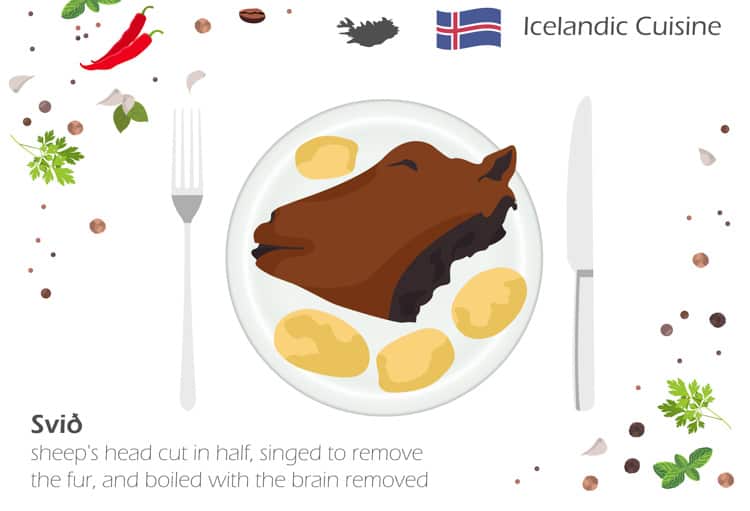 Humar means lobster in Icelandic, and is a delicacy in the country. The Icelandic lobster is tender and moth-watering with its rich flavor.

It’s probably one of the most expensive dishes at restaurants in Iceland, but it’s well worth the money if you like lobster. 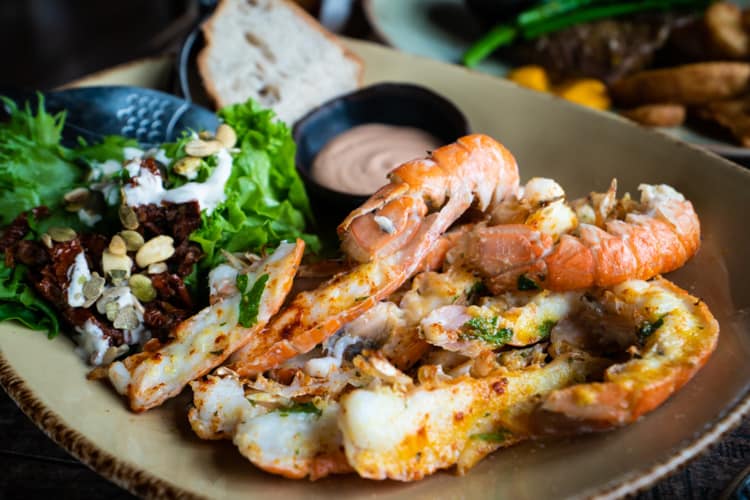 Dark rye bread is very popular to eat in Iceland. They normally eat it as a side dish to fish dishes.

When in Iceland, make sure to try the Rúgbraud that have been made at a hot spring – traditionally baked in a pot or steamed in a wooden cask buried in the ground near the spring.

It’s simply delicious and worth tasting while you’re in Iceland. 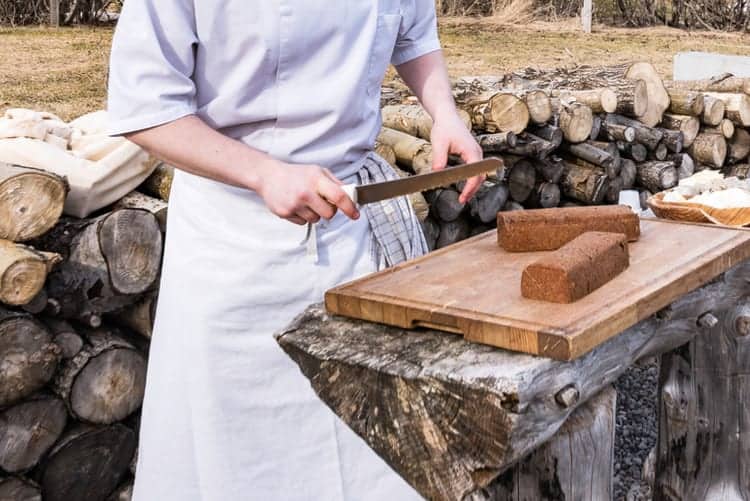 Another weird thing to eat in Iceland is Hrutspungar. It’s a dish made from sour ram’s testicles.

The testicles are pressed in blocks, boiled and cured in lactic acid. 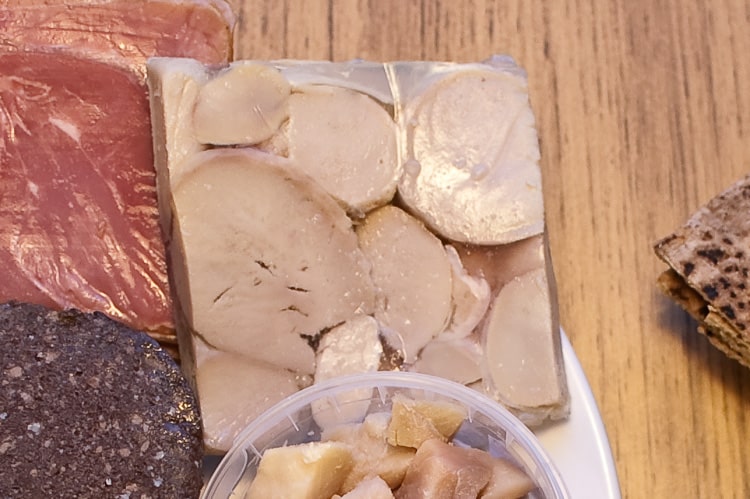 Fermented shark, also known as Hakarl, is the national dish of Iceland.

It’s made of Greenland shark- or sleeper shark meat that has been cut and put into boxes for 6-9 weeks to ferment. After that it’s hung up for another 3-4 months.

Back in the days it was buried underground in the sand for 3 months before being hung up to dry for 3-4 months.

This is a traditional Icelandic dish that is eaten all year round, and is very popular among the locals. The meat has a certain smell and ammonia taste, and is not always as popular among tourists. 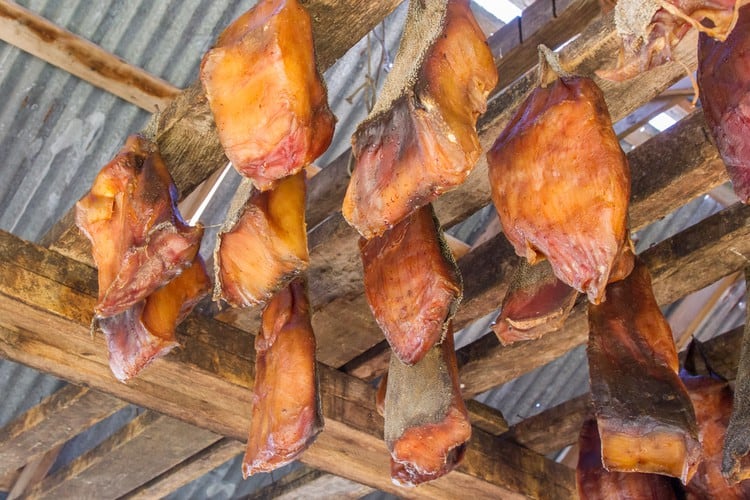 Iceland is surrounded by the ocean, so you’ll find plenty of fish dishes in the restaurants of Iceland. 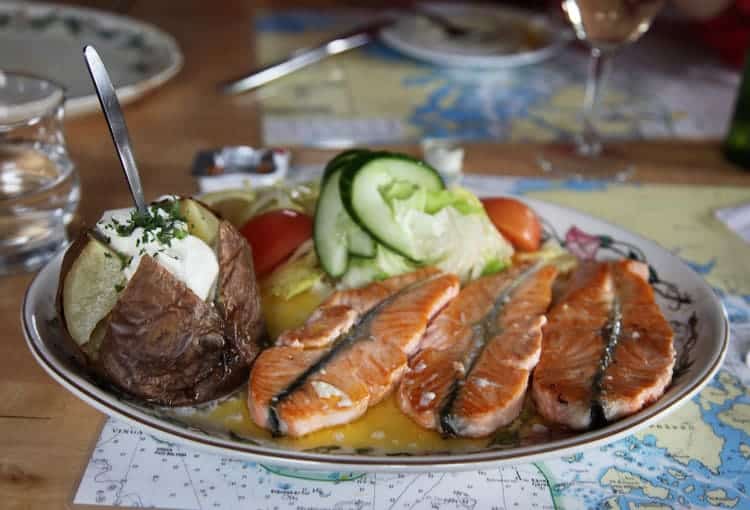 Flatkaka is an Icelandic rye flatbread. It’s round, soft, and thin with dark spots. It’s traditionally baked on hot stones or straight on the embers of the fire.

You can buy the flatkaka bread in the supermarkets in Iceland. However, the homemade ones are much tastier. 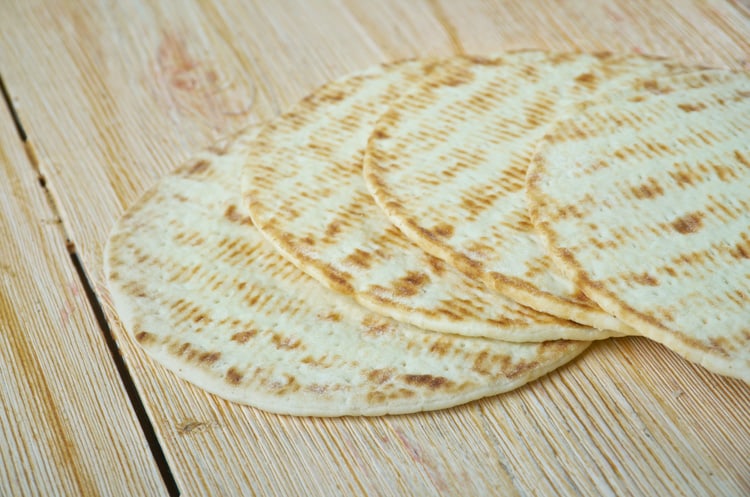 Iceland is a small country surrounded by the ocean, so there’s no big surprise that many of their dishes contain fish and seafood.

The Icelandic cuisine has its roots from the Scandinavian cuisine after the Norse Vikings settled during the 9th century.

What is the national food of Iceland?

Hákarl, fermented shark, is the national food of Iceland.

What is a traditional Icelandic meal? 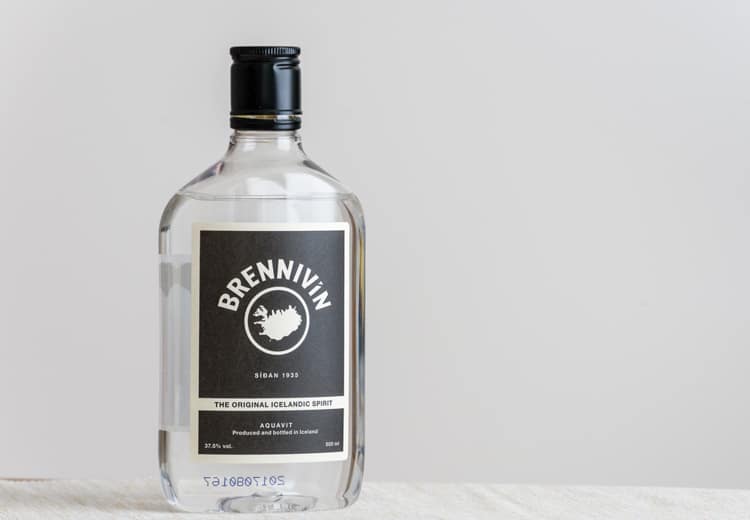 On the Icelandic Christmas table you can see common dishes such as ham, smoked lamb, and ptarmigan (an arctic bird).

These meat dishes are typically served with side dishes such as cabbage, potatoes, peas, corn, beans, gravy, and jam, etc.

During Christmas in Iceland you can eat traditional Christmas food at several restaurants. If you’re traveling on a tight budget you can also have some classic Icelandic Christmas meals at IKEA for a reasonable amount of money. 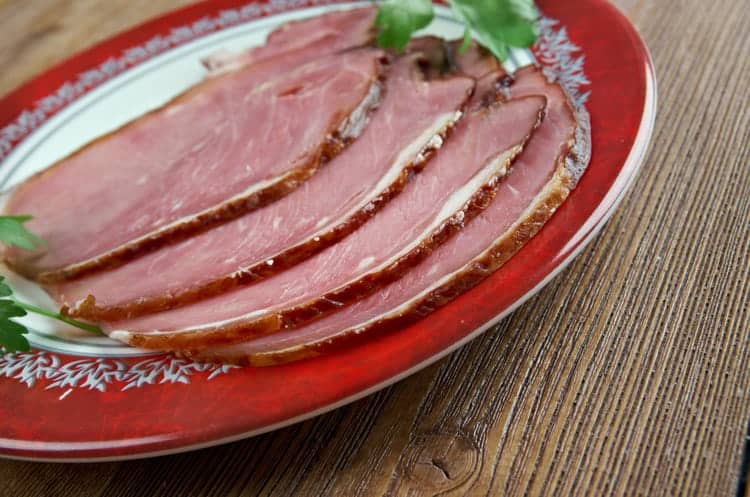 Do you have more questions about Icelandic food and cuisine? Leave a comment below!