Visiting the Itsukushima Shrine – My Experience

Want to know more about the Itsukushima Shrine?

The shinto shrine known as Itsukushima is located on the island of Miyajima in the Hiroshima Prefecture in Japan.

It’s a UNESCO World Heritage Site and is most famous for its floating torii gate. It’s one of the most popular tourist attractions in Japan, and a must to visit if you’re in the Hiroshima Prefecture.

Down below you can read more about the Itsukushima Shrine and useful information before visiting:

The history of Itsukushima Shrine

The island of Itsukushima (Miyajima) has long been a holy place in Japan.

It’s believed that the first shrines were built during the 6th century, however, the present shrines date back to the 12th century.

In 1168, the most powerful leader of Japan, Taira no Kiyomori, choose this island to build his clan’s family shrine – the Itsukushima Shrine.

During history the shrine has been damaged by both fires and a typhoon. After each restoration it’s believed the the shrine changed, however, after the typhoon in 1325 it became similar to its current state. 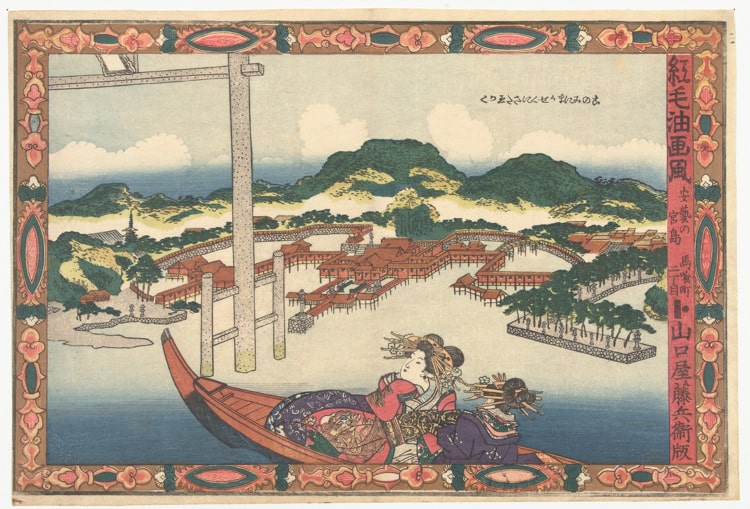 The Itsukushima Shrine is a UNESCO World Heritage Site and is one of the most sacred shrines in Japan. It’s the building that you can see on land, right behind the famous floating torii gate.

Inside the shrine there are several impressive corridors, shrines, stages, and halls to see. 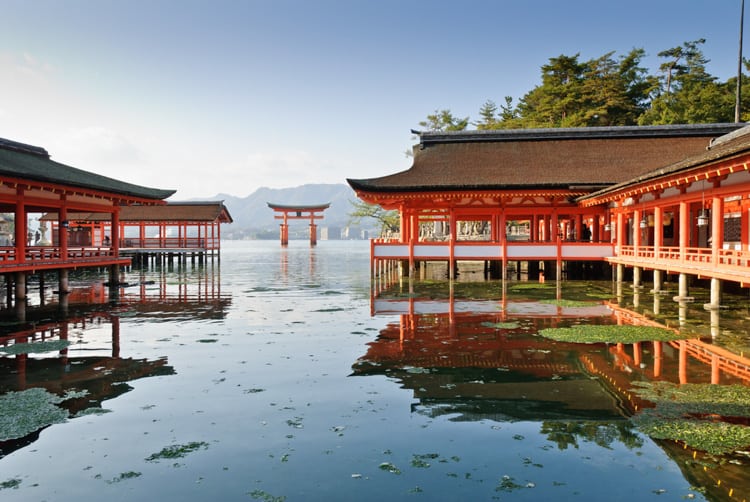 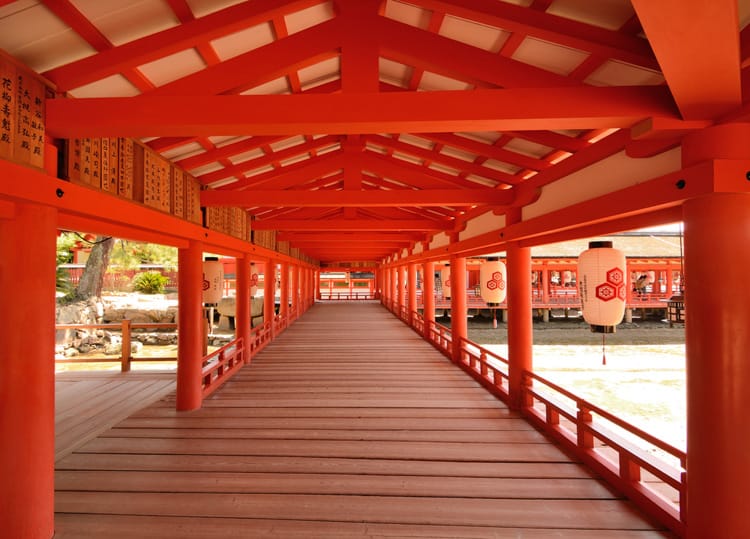 The floating torii gate is built on the beach in front of the Itsukushima Shrine and is one of the main attractions on Miyajima island.

One of the most magical things about this torii gate is that it looks like its floating on the water during high tide. 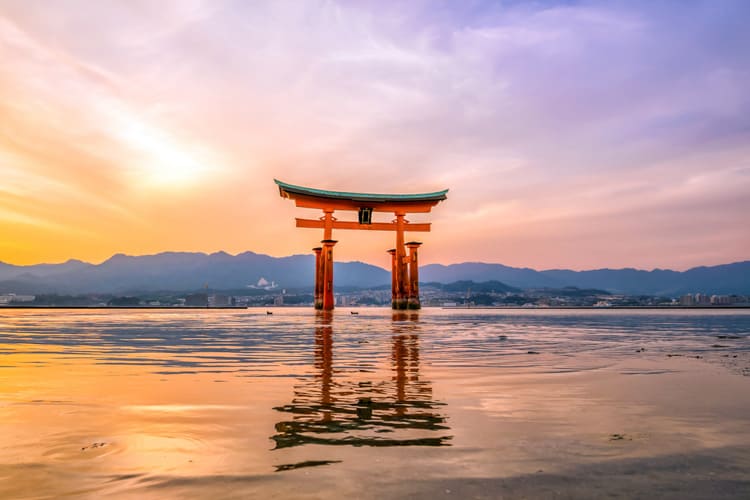 When you’re on Miyajima island and walk towards the Itsukushima Shrine, you’re going to be greeted by wild deer.

There are more than a thousand sika deers on the island, and according to local folklore the deer were considered to be sacred messengers from the gods.

Even though they’re friendly and come up to the visitors, remember that they are wild animals and can attack.

Don’t go there with lots of food and snacks in your bag, since they will notice and try to steal it from you. Don’t go around with paper or plastic bags either, since they’re familiar with the sound of the bags and they think it’s food. 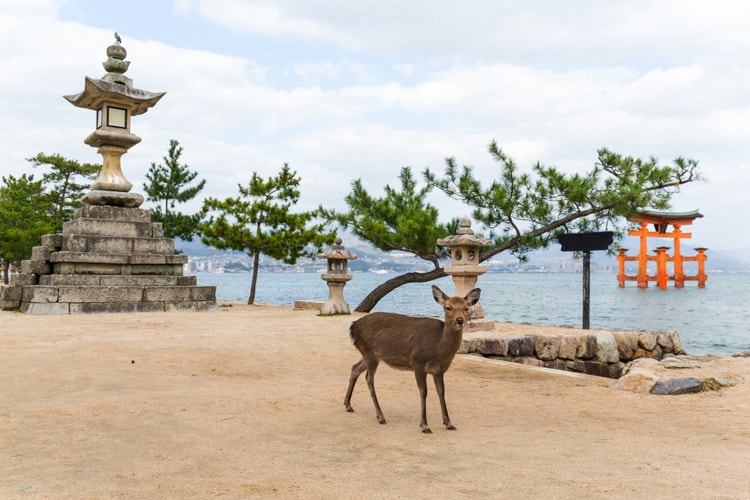 When is the best time to visit?

One of the most popular things to do is to do is to see the beautiful floating torii gate, and therefore it’s good to know about the tides.

When we visited the Itsukushima Shrine, I had no idea about the tides. When we got there it was low tide, no water around, and lots of people walking under the torii gate – which didn’t look good in photos.

However, we still got some cool reflection photos taking advantage of the puddles around the torii gate.

The best time to visit is obviously during high tide, since it’s the most beautiful to see the shrine with its reflection in the water. 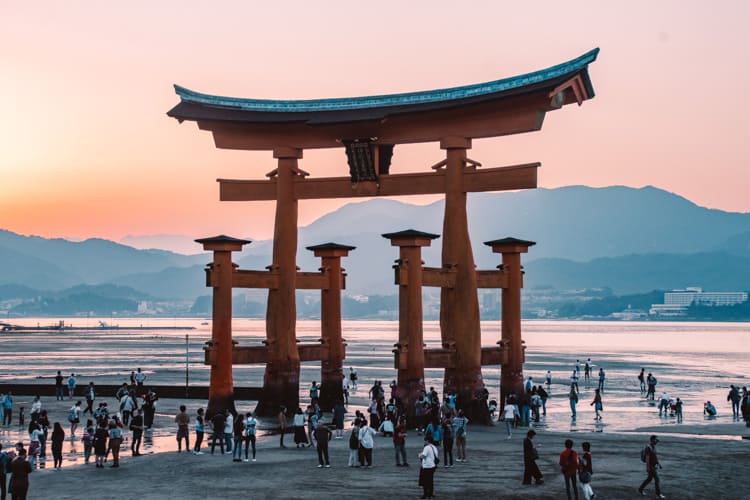 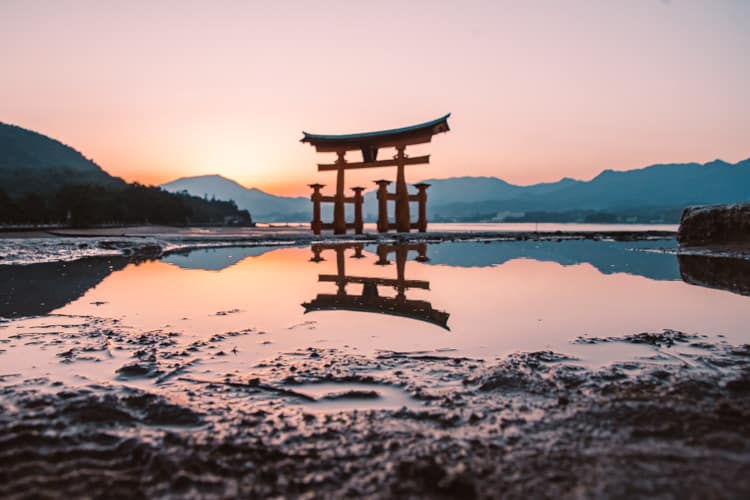 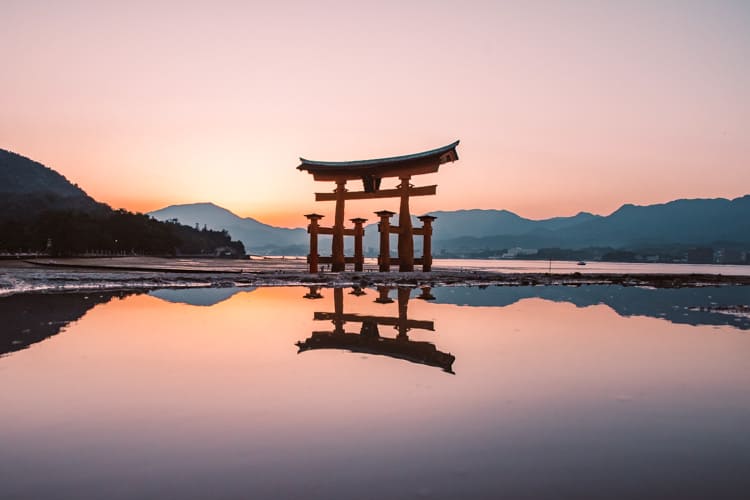 How much does it cost to visit?

In addition to the train and ferry tickets that you have to buy to get to Miyajima Island, you also have to pay a small fee to go inside the shrine. The admission is 300 yen, but for 500 yen you can combine your entry with the Treasure Hall.

The floating torii gate is free to visit.

How to get to Itsukushima Shrine

To get to the Itsukushima Shrine you have to catch a train from Hiroshima Station (JR Sanyo Line to Miyajimaguchi Station) and from there you have to walk down to the ferry.

The train takes around 25 minutes and cost 410 yen one way.

There are two ferry companies operating to Miyajima, JR and Matsudai. Both ferries take 10 minutes and cost 180 yen one way.

NOTE: If you have a Japan Rail Pass, it’s valid on the JR ferries.

When you’re at Miyajima island, you can reach the Itsukushima Shrine within walking distance.

Down below you have two recommended hotels on Miyajima Island. Staying on the island makes it possible for you to see the sunrise at the famous floating torii gate and to visit several attractions without massive crowds.

In addition to this you’ll get a relaxing stay at Miyajima island with its peaceful surroundings and beautiful views. Why is the Itsukushima Shrine famous?

It’s famous for being one of the most holy sites in Japan, and for its beautiful floating torii gate.

Today the Itsukushima Shrine is a UNESCO World Heritage Site, which attracts lots of tourists.

What is the Itsukushima Shrine made of?

It’s made of different kinds of wood, such as camphor wood, padauk wood, and cypress wood.

What does the torii gate symbolize?

The torii gate is a traditional Japanese gate most commonly found at the entrance of or within a shinto shrine.

It’s symbolizes the transition from the mundane to the sacred.

Down below you have a map of the Itsukushima Shrine. If you have a pocket wifi it’s easy to find the shrine and several other famous attractions on Miyajima island using Google Maps.

Do you have more questions about the Itsukushima Shrine? Leave a comment below!

Japanese Food: 25 Traditional Dishes to Eat
12 Japanese Desserts and Cakes to Taste
A Complete Guide to Hiroshima Castle
Visiting Okunoshima – My Experience of the Rabbit Island

I’ve been traveling the world full-time for 4 years now, and knocked off some big adventures from my Bucket List. I love being out in nature and see wild animals, and I also have a big passion for paradise beaches and responsible travel.