Do you want to know more about Japanese food? Japan is full of interesting and delicious local dishes to taste during your stay.

In Japan you can eat classic dishes like sushi and ramen to interesting dishes like natto and Takoyaki. Down below you can read more about Japanese food and its traditional dishes:

Udon is one of the most popular types of noodles to eat in Japan. It’s thick noodles with a chewy texture made from wheat flour and brine water.

These noodles can be served in different ways. Udon noodles are most common to eat in soups, but can also be added to hot pots and be stir fried with various ingredients.

Udon noodle soup is the most popular dish where they’re served the noodles in a rich broth and topped with both meats and vegetables.

It’s one of the most classic dishes when it comes to Japanese food, so it’s a must to taste it while you’re in the country. 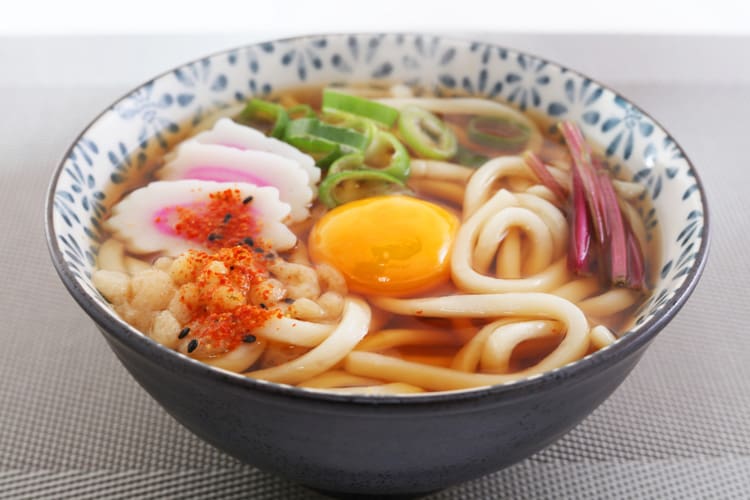 Curry with rice is known as Kare or Kare Risu in Japan, and is one of the most loved dishes. Curry has been a big part of the Japanese food culture since the Meiji Era (1868-1912), when it was introduced by the British people.

It’s a curry that’s thick in texture and is sweet in flavor. It’s simply delicious and a must to taste while you’re in Japan.

PS: This is a Japanese food that are served as vegetarian as well in some curry restaurants around the country. 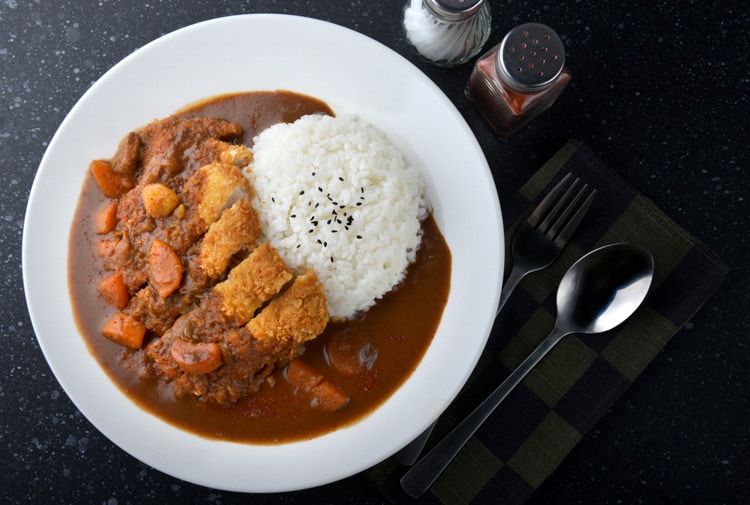 Tempura is made of deep fried vegetables and seafood that can be eaten as a snack or as a whole meal together with a bowl with rice.

This is a dish that’s eaten differently in different parts of the country. For example, in Tokyo they eat it with a dipping sauce, while in the region around Kyoto and Osaka they dip the tempura in flavored salt.

Either way you’ll have it, it’s delicious! 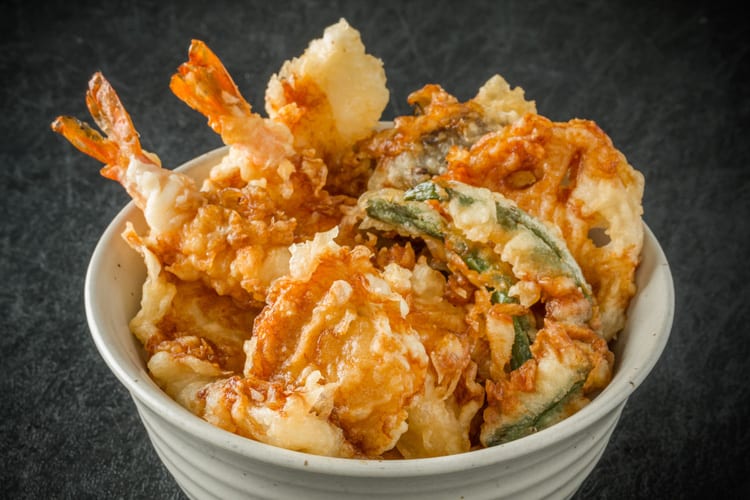 Sushi is a dish that’s loved and eaten all over the world. However, I can tell you that after you’ve had sushi in Japan, you’re not going to want to eat it anywhere else.

Sushi in Japan is fresh and packed with delicious flavors – something that’s hard to find in sushi restaurants in other countries.

It doesn’t matter if you go to a cheap sushi chain restaurant where two pieces cost around 1 euro, or going to a fancy sushi restaurant where it’s much more expensive – you’re going to love the sushi in Japan! 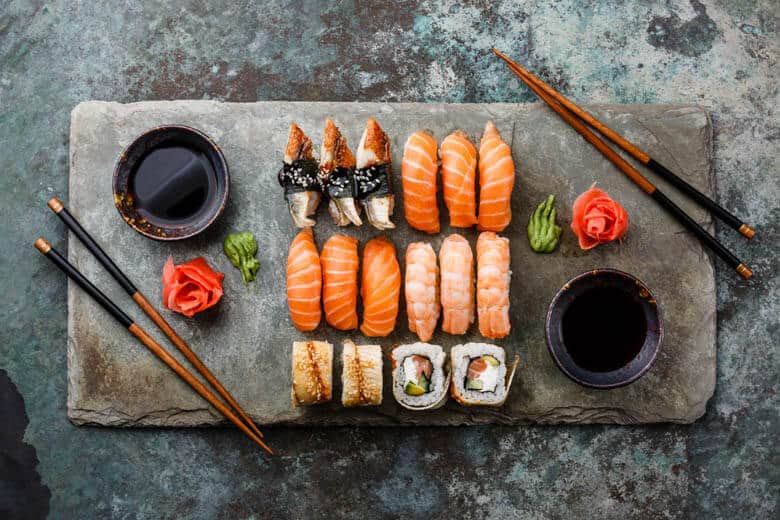 Yakitori is one of the more famous dishes in Japan and is made of pieces of chicken grilled on skewers. The meat is both tender and full of delicious flavors. 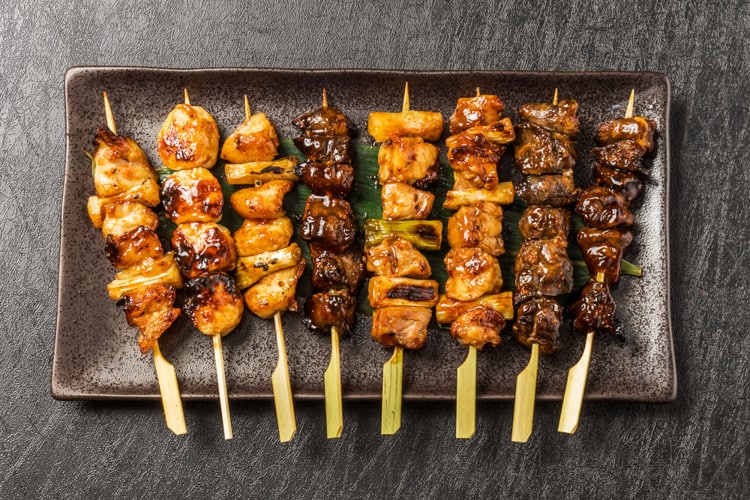 Gyoza is one of my personal favorite dishes when it comes to Japanese food. It’s moon-shaped dumplings that’s most commonly filled with pork mince, cabbage, green onion, and mushrooms. However, they can be filled with other ingredients as well.

They are fried to get a crispy bottom and then steamed to perfection. It’s very yummy! 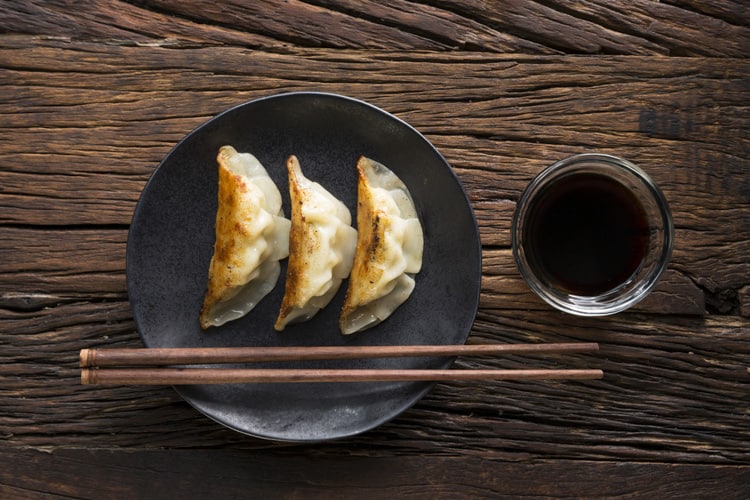 Takoyaki is a classic street food in Japan and can be found at most food markets around the country. It’s balls made of a savory batter with an octopus filling.

This dish is usually served with 6-8 takoyaki balls topped with a takoyaki sauce, mayonnaise and fish flakes (katsuobushi bonito) or seaweed (aonori). 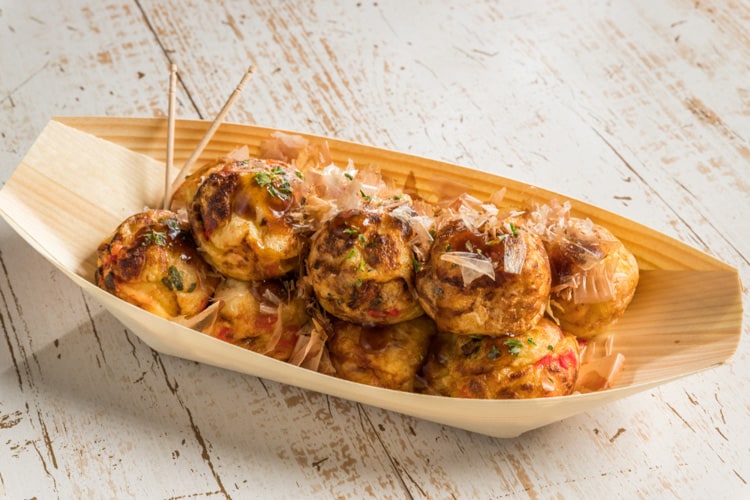 Edamame is type of soy bean that’s a common snack in Japan. They are healthy, flavorful, and served lightly salted.

It’s common to be served in restaurants as appetizers, as well as in pubs as a snack. 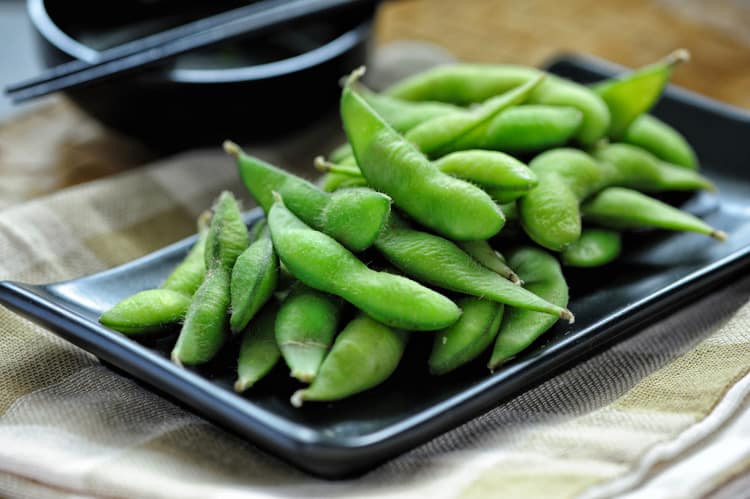 Sukiyaki is a hot pot dish made of tofu, vegetables, noodles, and beef cooked in a broth made from soy sauce, sugar, sake, and rice wine.

The name of the dish actually means ”cook what you like” in Japanese, so the ingredients can vary from restaurant to restaurant.

It’s simply delicious and a must to add to your bucket list of Japanese food. 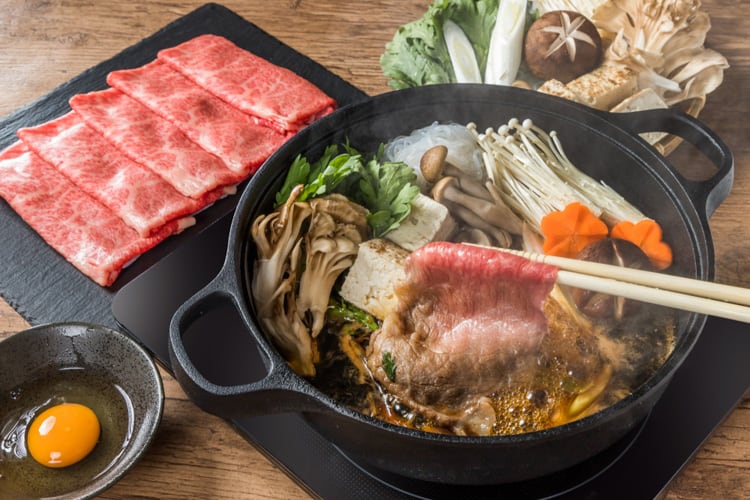 If you enjoy eating seafood, then you might want to taste mentaiko. It’s made of fish roe eggs that they marinate in salty, spicy or savory flavors. The most popular version is the salty mentaiko, however the spicy is starting to become just as popular.

It’s eaten as a side dish with rice, as a filling in the rice balls onigiri, or as a topping on ramen. 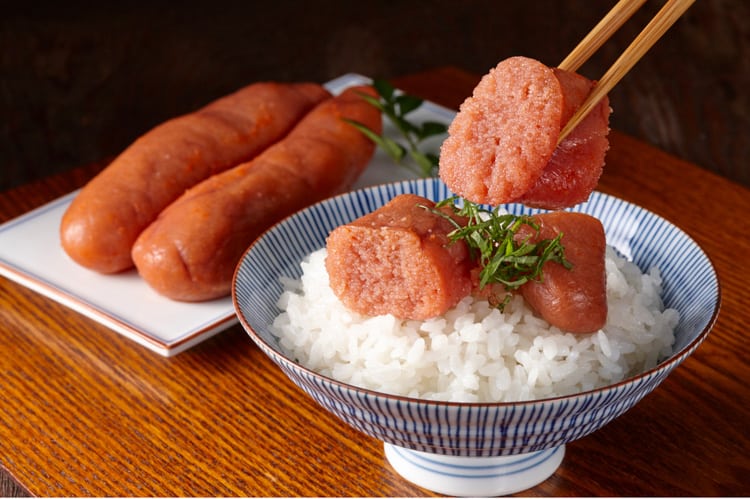 This is a dish that’s served with various Japanese food. It’s a soup made from dashi stock (fish or kelp) and miso bean paste. Before being served, tofu and sliced green onions are added.

However, fish, seafood, and meats can also be added to the soup at some restaurants. 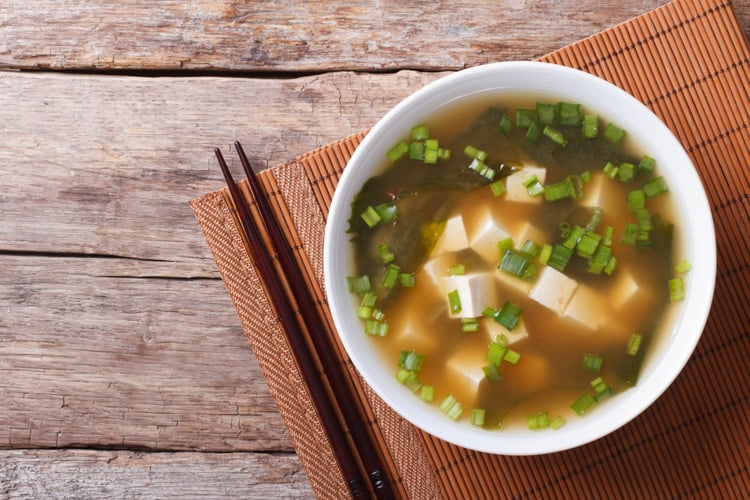 Okonomiyaki is a Japanese pancake made of a batter mixed with a variety of savory ingredients.

Some of the most common ingredients include green onions, cabbage, shrimp, squid, various other vegetables, cheese, and beef. 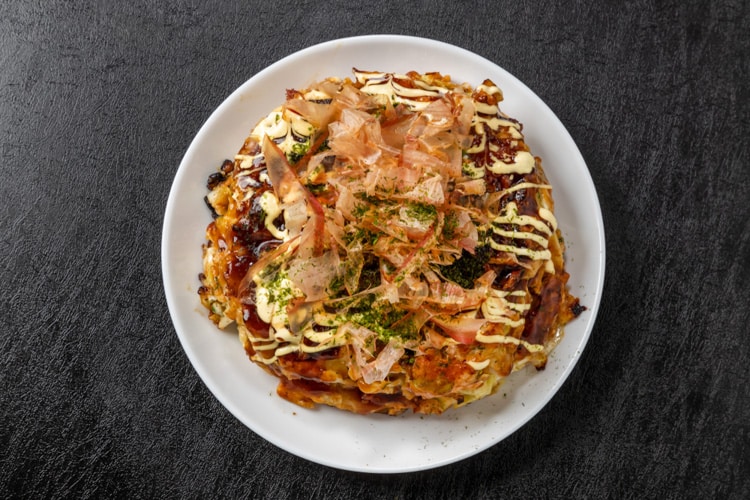 This is a Japanese style omelette made from beaten eggs that they cook flat and roll up into several layers. It’s then sliced and eaten as it is, but can also be used as a topping on other Japanese food – like sushi for example. 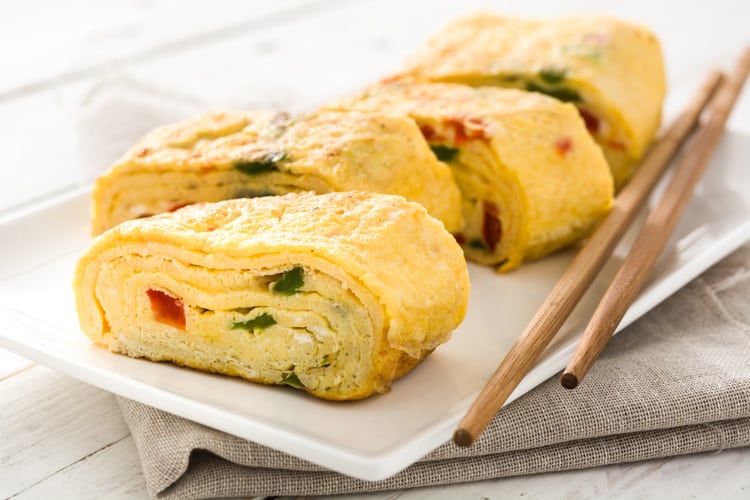 Natto is one of the weirdest foods in Japan and is made from fermented soy beans. It has a strong smell and slimy texture that not everyone like.

It can be served as it is, on a bed of rice, or even as a topping on sushi.

Even though many people doesn’t like this Japanese dish, it’s still a must to taste while you’re in Japan. You never know, maybe you’ll be one of the persons who really likes it. 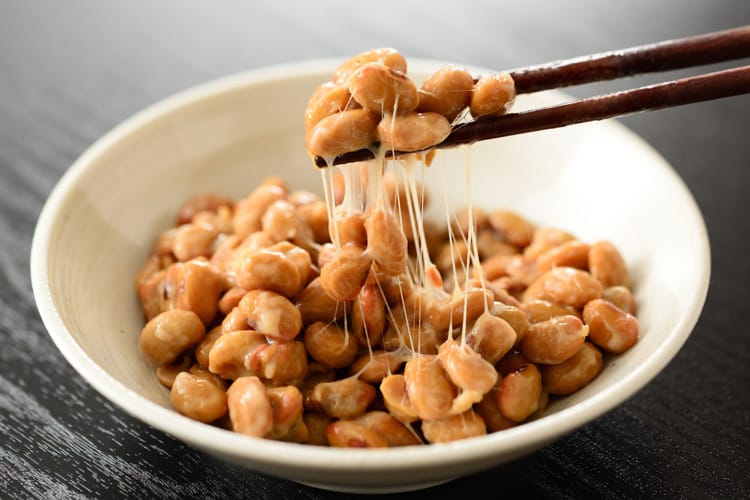 Oden is a local favorite dish during the cold winter months in Japan. It’s a hot pot dish made with various vegetables and proteins, such as boiled eggs, daikon radish, tofu, rice cakes, fish cakes, and noodles etc.

It’s all cooked in a broth and served in a large hot pot on the table. From this pot you can scoop out your favorite pieces with some broth.

It’s a classic, so make sure to taste it while you’re in Japan! 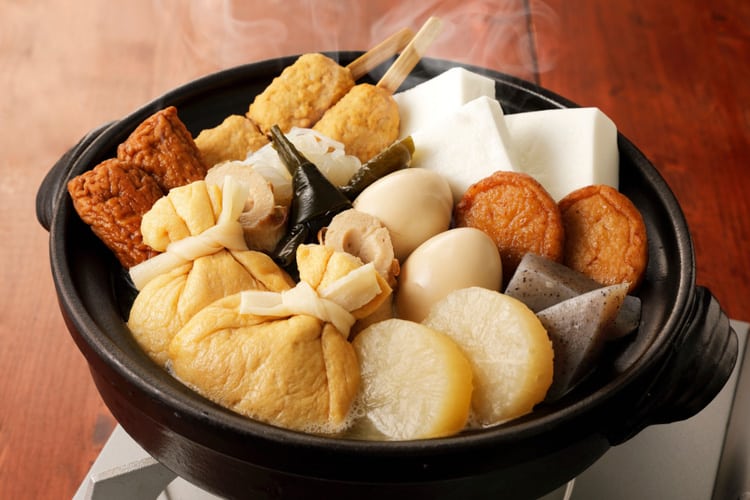 Soba is another type of noodles and has been eaten in Japan for centuries.

It’s made from buckwheat flour and shaped into long thin noodles. They are commonly served chilled with a dipping sauce or in a hot rich broth.

It’s simply delicious, so make sure to add it to your bucket list of Japanese food! 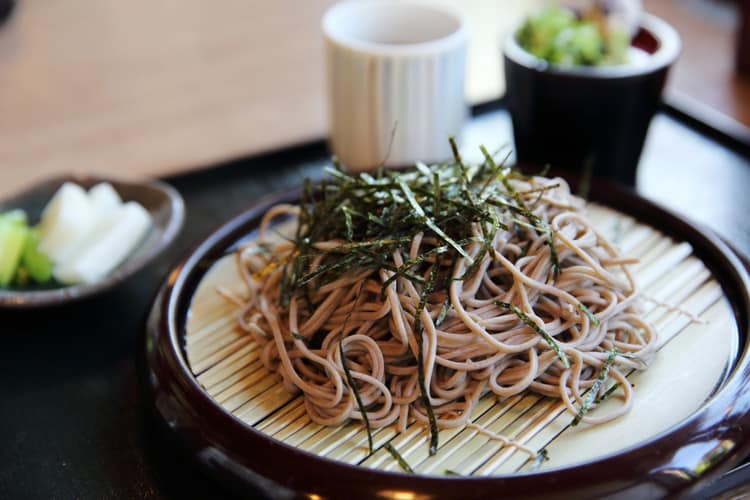 Sashimi has been around in Japan much longer than sushi. Sashimi is thinly sliced raw fish or meat that’s eaten with some pickled ginger, wasabi and soy sauce.

Fish and seafood is the most popular, but raw chicken (tori-zashi), beef (gyuu-sashi), and horse (basashi) are also possible to find in the sashimi restaurants of Japan. 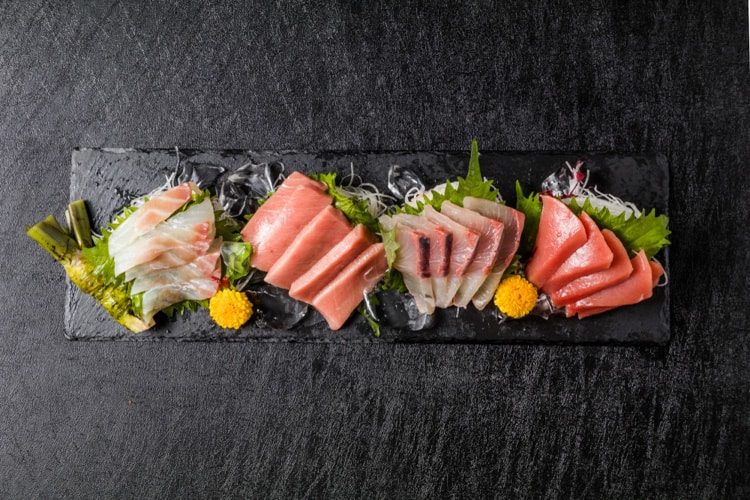 Ramen is probably the most popular type of noodle soup to eat in Japan. It’s made of wheat ramen noodles cooked in a savory broth made from miso, soy sauce, tonkotsu pork bone, and salt.

The noodle soup is topped with various ingredients such as meat, vegetables, and nori seaweed before being served on the table. 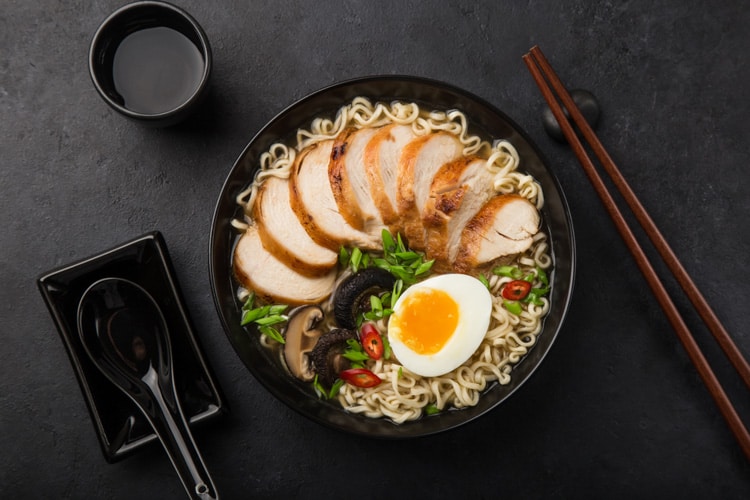 Donburi is a popular dish to eat for lunch in Japan. It’s made of various vegetables, meat, and fish that they simmer to perfection and serve in a bowl filled with steamed rice.

One of the most common styles of donburi is oyakodon, which is made of simmered chicken, egg, and green onions. Gyudon is also popular and is made of pieces of beef and onion simmered in a soy sauce. 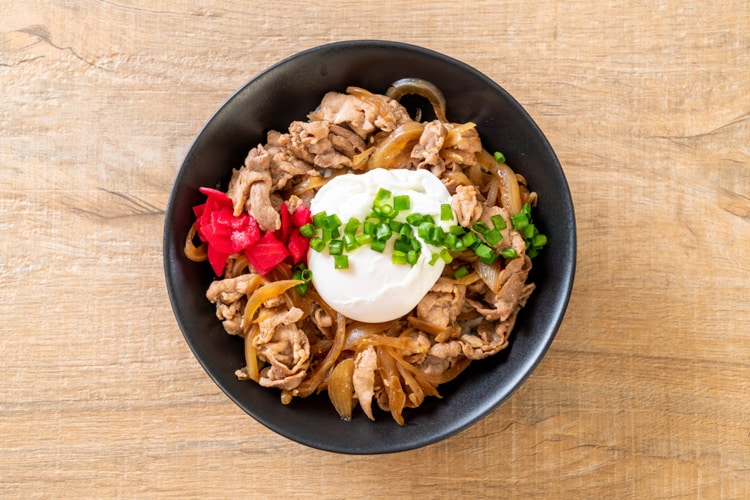 Tonkatsu is made of breaded pork cutlet that is deep fried until it gets a golden color.

Today it’s a classic Japanese food that originally was introduced by the Europeans. However, the Japanese people made their own version of the original dish.

It’s a common topping on Japanese curry, which is also a dish that you should add to your bucket list of Japanese food. 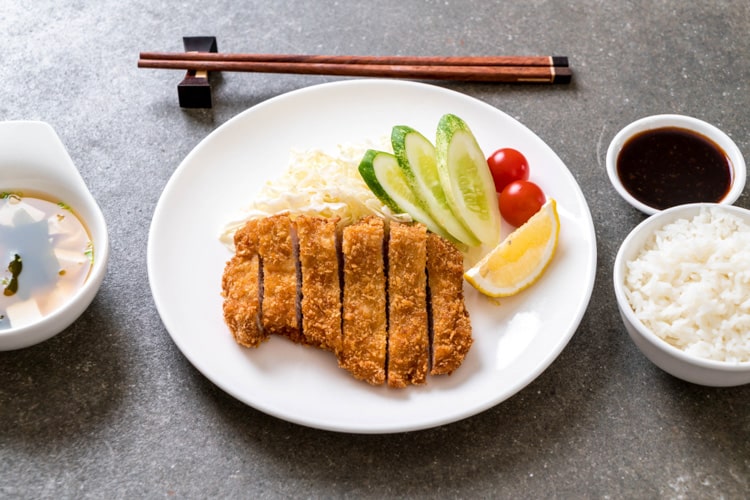 This is one of the most delicious dishes in Japan (in my opinion) and is made of stir fried noodles with various vegetables, meats, and yakisoba sauce.

Yakisoba means ”cooked soba” in Japanese, but unlike most other soba noodles, these do not contain buckwheat.

It’s a classic dish to taste in Japan. I’m sure that you’ll love it as much as I do. 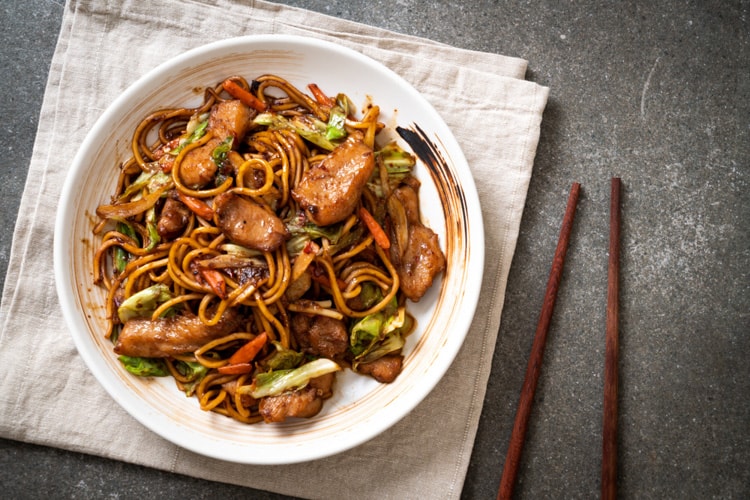 Unagi no Kabayaki is a dish made from freshwater eel brushed with sweet soy sauce / kabayaki sauce. It’s cooked on a grill and is most common to find at restaurants in Japan during summer. 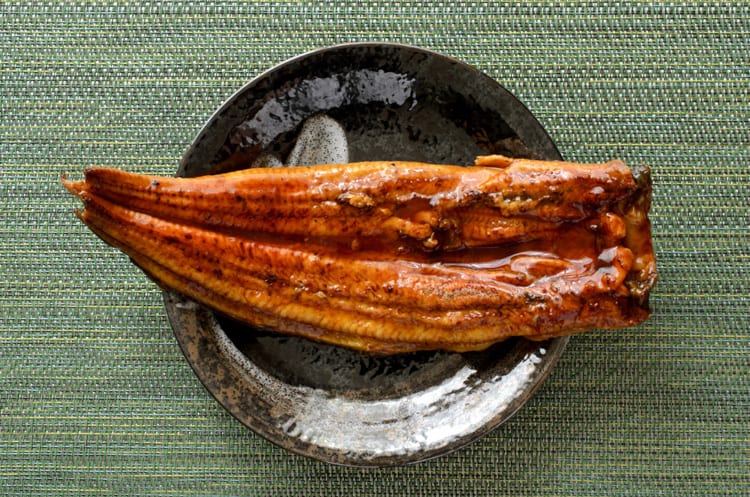 This is one of the Japanese dishes that are popular to make at home. However, it’s also common to find in the restaurants of Japan.

It’s a stew made of vegetables, meat, and potatoes simmered in a soy sauce with sugar, mirin and sake. Nikujaga is simply delicious, so make sure to taste it if you see it on a menu in Japan. 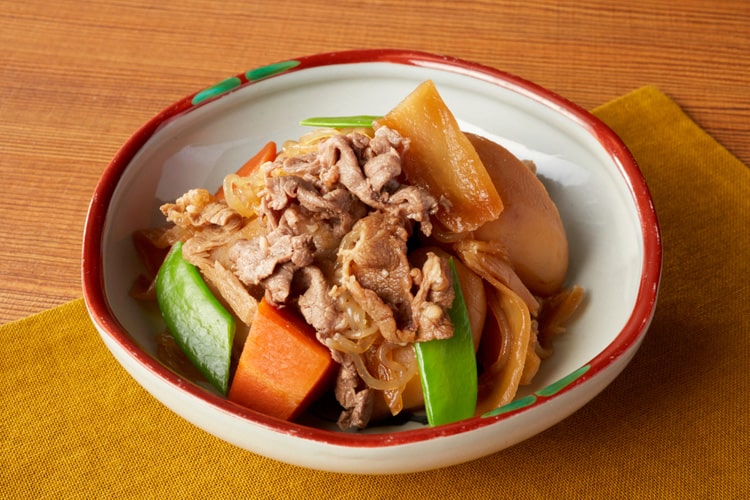 This is something I had for breakfast, but also as a snack, every other day while traveling in Japan. It’s rice balls that can be served plain, with various fillings, or grilled. They have a triangular shape and are wrapped in nori seaweed.

You can buy these at most convenience stores around the country. It cost around 100-150 yen for one onigiri.

I personally like the ones filled with tuna mayonnaise, teriyaki chicken, and those who are grilled with plain rice. It’s a simple but yummy thing to eat in Japan if you like rice. 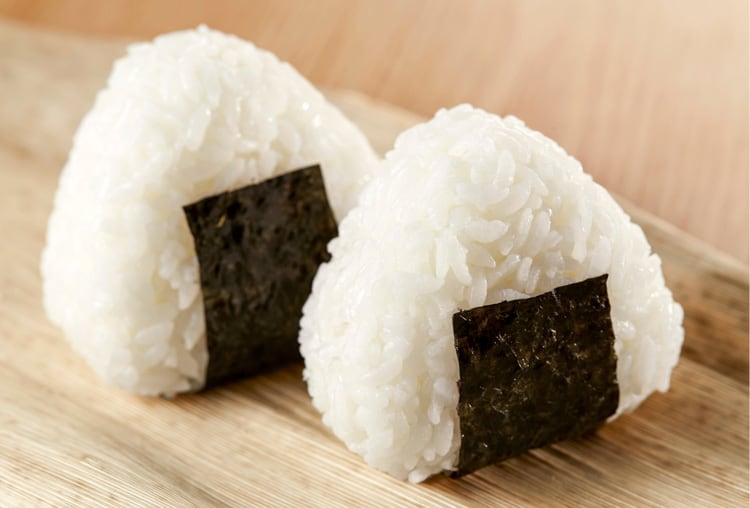 Shabu Shabu is a hot pot dish that’s popular in Japan. For this dish they use different kinds of seafood and meats that they cook in a rich broth.

You put the meat into the broth and cook it until its ready. Then you dip it in a soy sauce or sesame sauce before being eaten alongside various side dishes.

It’s type of Japanese food that’s best enjoyed together with friends or family. 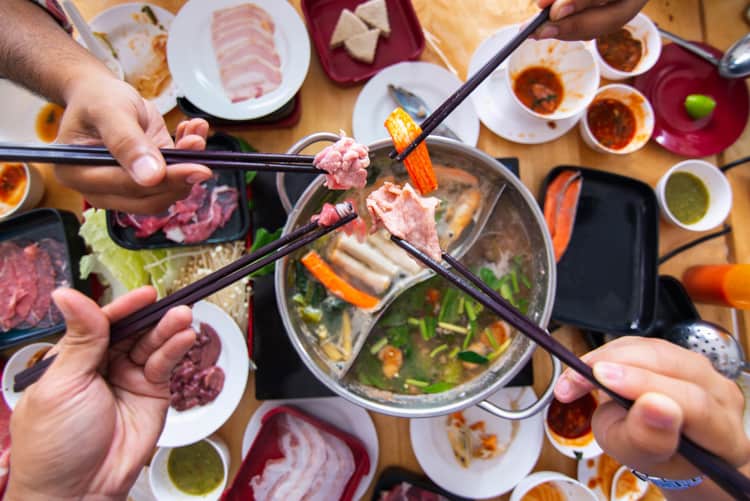 The Japanese people are very passionate about their food, and that’s something you’re going to notice when tasting the local Japanese food.

While many of the traditional dishes contain either meat, fish or seafood, there are several dishes that are vegetarian due to Buddhism.

What’s the national dish of Japan?

Japan does not have an official national dish. However, the dish Curry Rice is so widely consumed that it’s considered to be the national dish of Japan.

What is a traditional meal in Japan?

Japanese desserts and sweets to taste

The Japanese people are crazy about sweets, and that’s something you’ll notice when visiting the country. There are several Japanese desserts that you can taste during your stay, and here are a few recommendations: 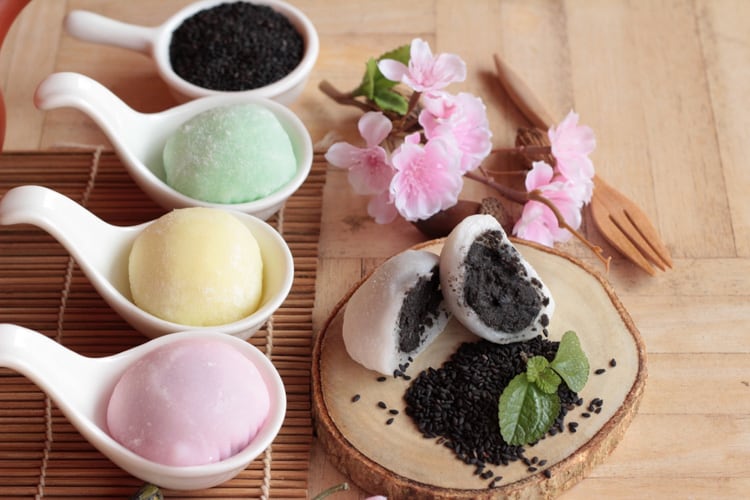 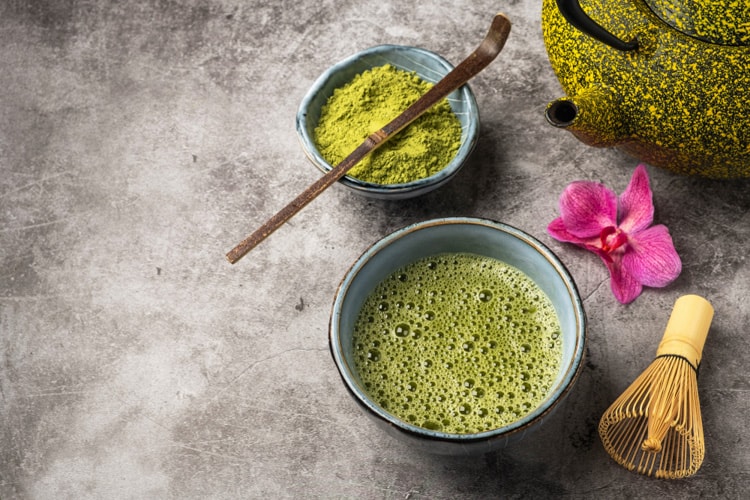 Christmas is not seen as a religious holiday in Japan, but is more celebrated for the fun. Christmas Eve is a romantic day in Japan where couples spend time together, exchange gifts, and go out to eat.

And why is that you might wonder? In 1974 they had an advertising campaign by KFC known as ”Kentucky for Christmas”, which became a hit among the locals. Ever since then it’s been a tradition in Japan. 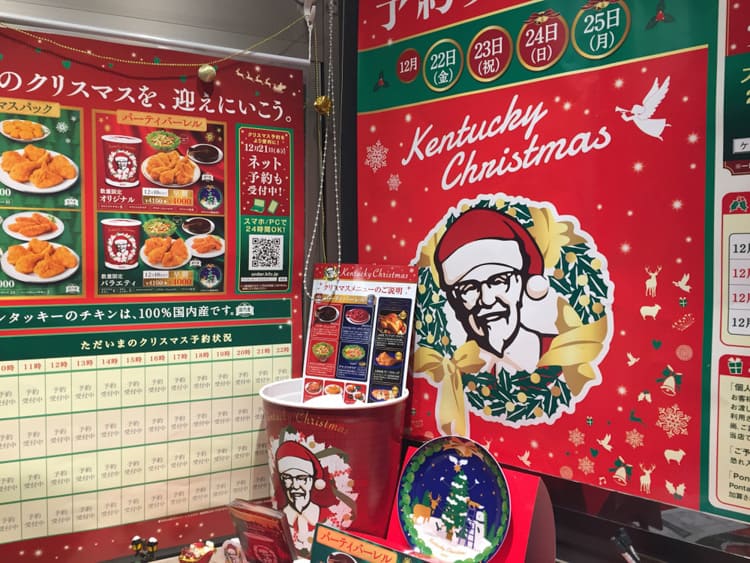 Do you have more questions about Japanese food and cuisine? Leave a comment below!