Want to know more about Mexican food and cuisine? Mexico is a country that’s full of delicious dishes that you can taste during your stay in the country.

There are everything from the classic dishes like tacos, fajitas, and enchiladas to less famous dishes that are just as delicious. Down below you can read more about Mexican food and its traditional dishes:

This is one of the most famous dishes when it comes to Mexican food – it’s known all over the world!

Mexican tacos is made of a small round tortilla bread that’s filled with meat, cilantro, sometimes vegetables and some fresh lime juice.

It’s really good, so make sure to taste it while you’re in Mexico. 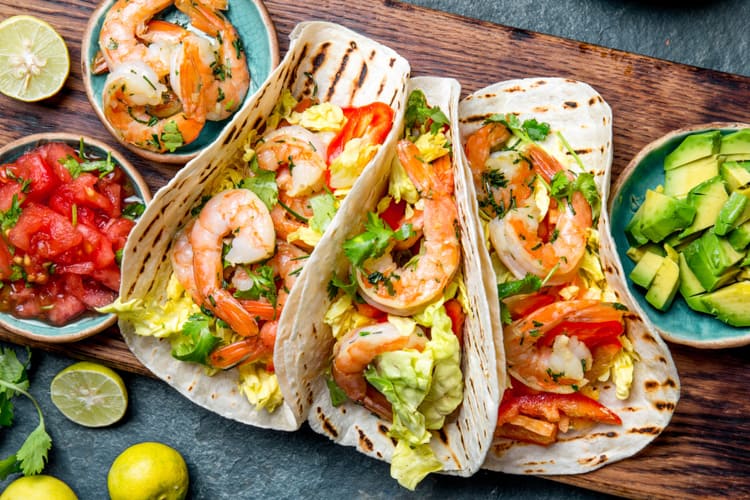 Enchiladas is another classic dish to eat in Mexico. It’s made of corn tortillas that are filled with both meat, cheese, vegetables, and beans, etc. They’re rolled up and topped with some salsa sauce and grated cheese. 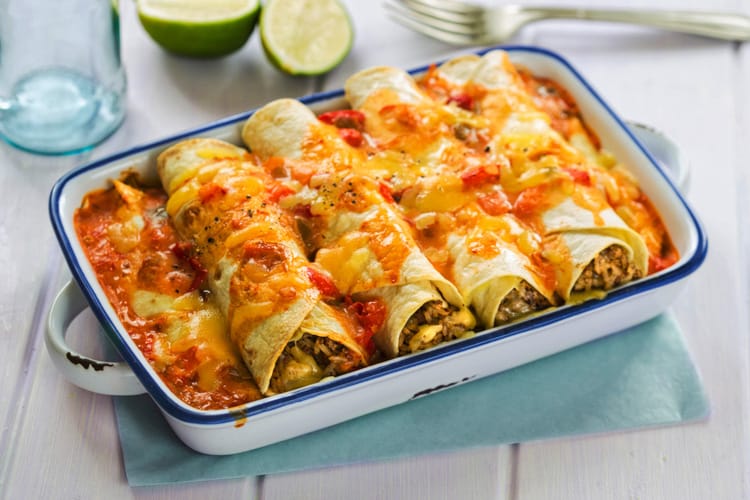 This Mexican food is made of corn tortillas that have been fried and cooked in a salsa sauce.

There are different versions of this dish depending on where and when you eat it. For breakfast it can be topped with some eggs, but for lunch and dinner it’s more common with chicken, beef, beans, or guacamole. 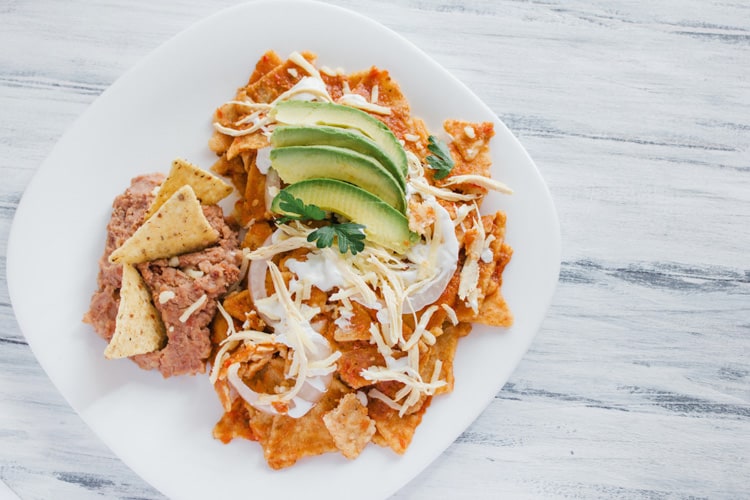 Mole is a type of sauce they have in Mexico that’s frequently used in the Mexican kitchen. It’s a sauce made of exotic herbs and spices, ground nuts, chilies, and bitter chocolate.

Mole poblano is the most popular and is made of chili peppers and chocolate. 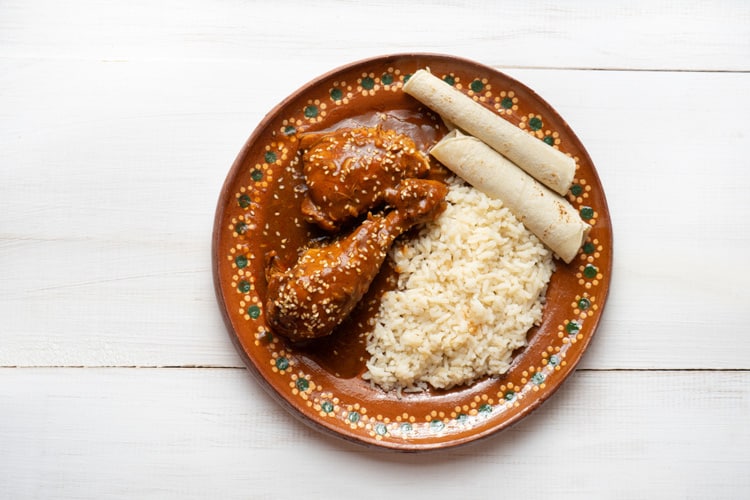 As mentioned, tacos comes in many varieties with different types of ingredients.

Tacos al Pastor is one of the most popular styles of tacos to eat in Mexico and can be found at both restaurants and street stalls. It’s made of marinated pork mixed together with onions, cilantro, pineapple and salsa sauce in a tortilla bread.

If you like tacos, then this is one Mexican food that you have to taste! 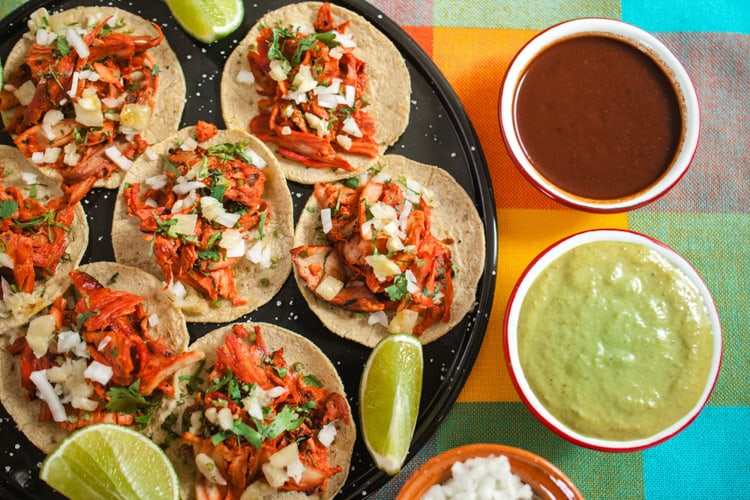 It’s a classic, so make sure to taste it while you’re in the country! 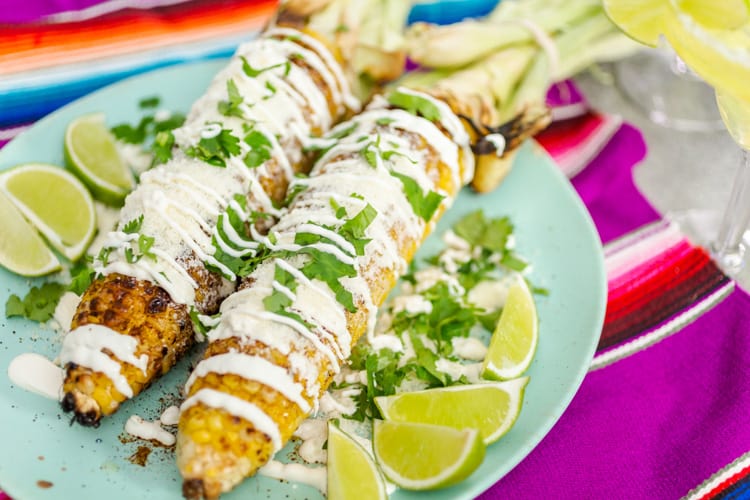 Guacamole is one of the most popular dishes in Mexico that has been around since the Aztec Empire. It’s made of avocado, onions, tomatoes, lemon juice, chili peppers and sometimes garlic that are mixed to a creamy consistency.

This delicious dish is usually eaten with tortilla chips or used as a filling or topping in several traditional Mexican dishes. 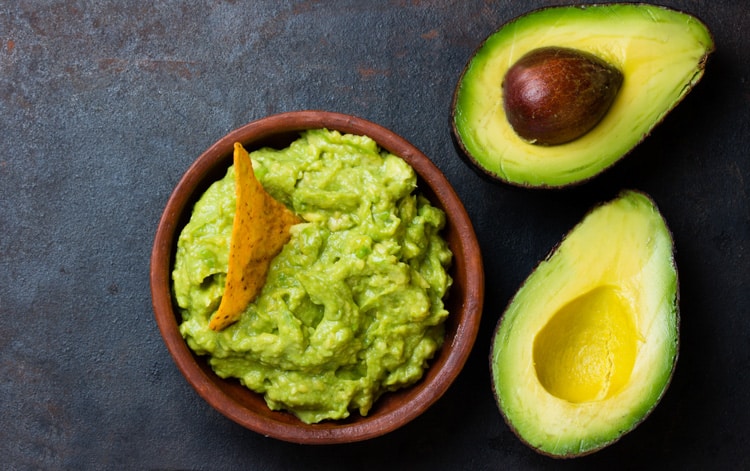 Huevos Rancheros is a common breakfast dish in Mexico, but is also popular to eat during other times the day.

It’s made of fried tortilla breads topped with fried eggs and a salsa made of tomatos, onions, chili peppers and cilantro. Some places serve Huevos Rancheros with rice and beans as well. 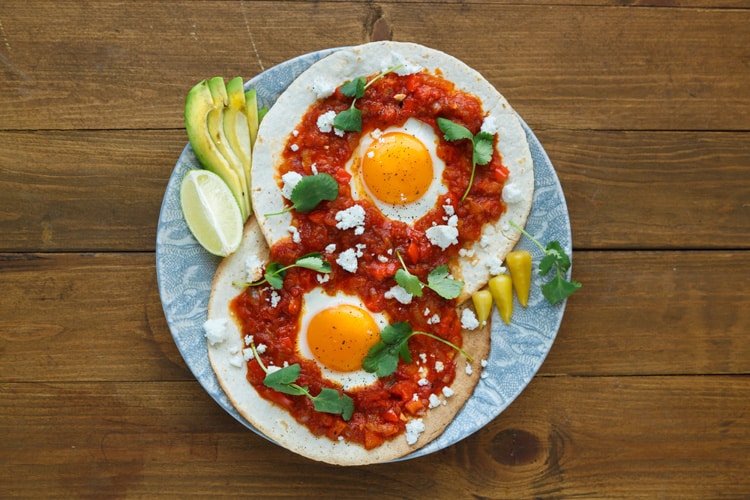 Cochinita pibil is a traditional Mexican food from the Yucatán Peninsula.

It’s made of pork that has been marinated in citrus juice, vinegar, and annatto seeds. The marinated meat is then wrapped in a banana leaf and slow-roasted until tender. 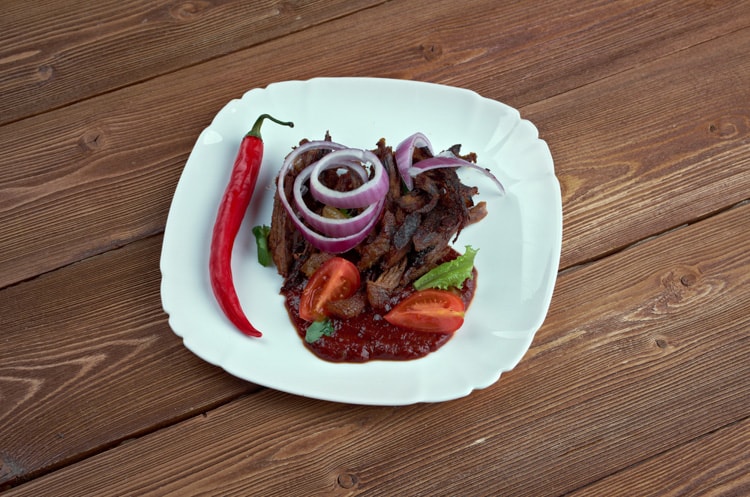 Sope is another traditional Mexican food that comes from the central and southern parts of the country.

It’s a thick tortilla topped with meats and vegetables such as lettuce, onions, and refried beans. Other common toppings also include cheese, red or green salsa sauce, and sour cream.

There are different styles of Sopes available in Mexico, so my best tip is just to taste it at different restaurants when traveling through the country! 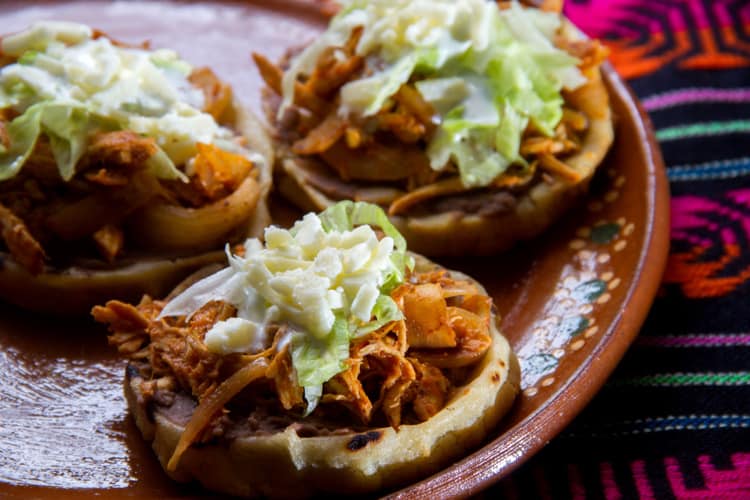 Fajitas is one of the most famous dishes in Mexico. It’s basically grilled meat that’s served in a corn tortilla bread.

Originally it was made with skirt steak, but today it’s also common to make it with chicken and beef.

What makes this dish stand out is the delicious seasoning, as well the meat and vegetables that are perfectly cut in the same sizes. 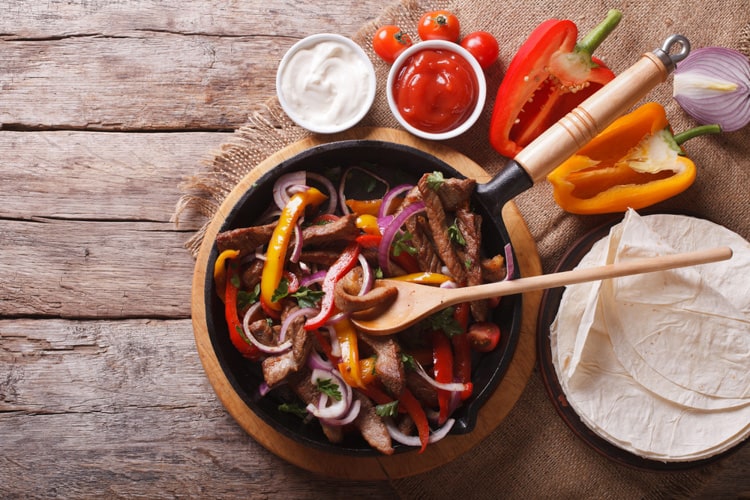 Queso fundido is a popular appetizer in Mexico and is made of melted Oaxaca or Chihuahua cheese topped with chorizo.

It’s served with tortilla bread and is a perfect dish to share with your friends and family before the main dishes. 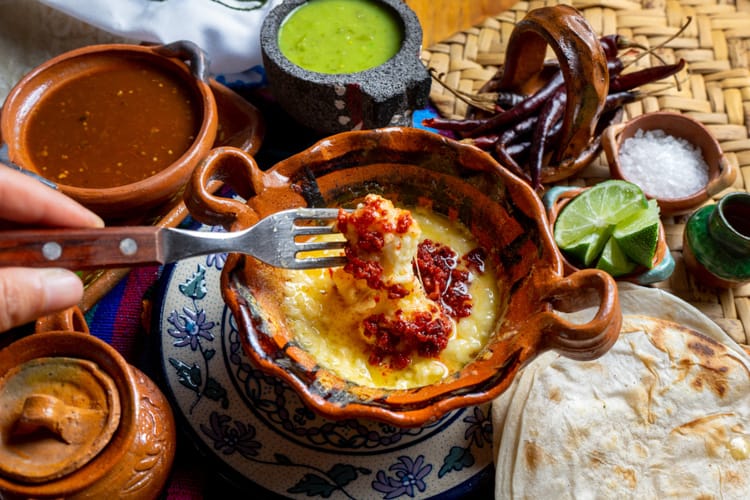 Entomatada is a dish that’s similar to enchilada. It’s made of tortillas filled with various ingredients such as chicken, beef, cheese, or beans.

They’re folded over and covered in a tomato sauce made of garlic, tomatoes, onions, and oregano. 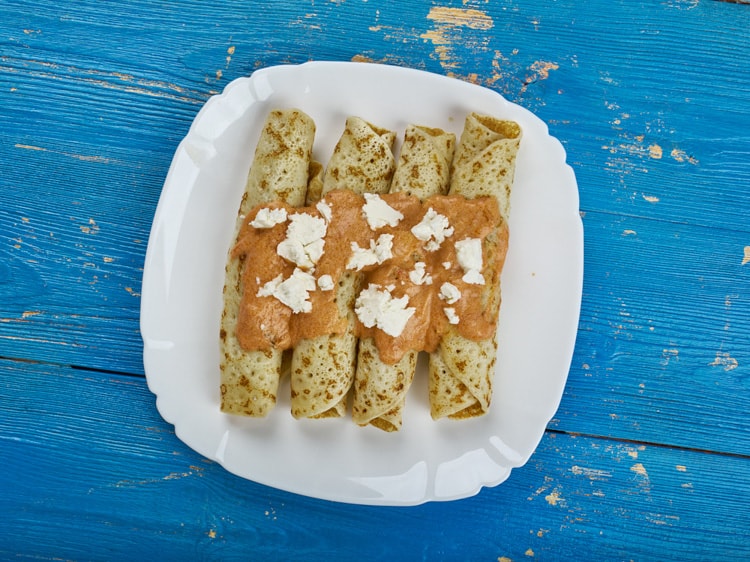 This is a Mexican style ceviche is made with shrimps seasoned with chili peppers, lime, salt, and cilantro. It’s mixed with cucumber and slices of onions, and sometimes avocado as well.

It’s a common dish to eat in Northwest Mexico. 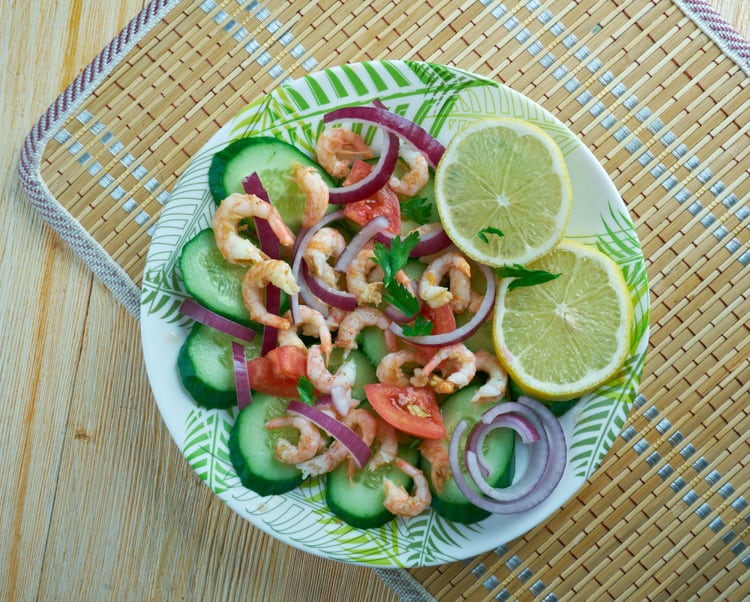 Huarache is a dish that’s similar to the dish Sopes. It’s made of a oval shaped tortilla bread and topped with meat and salsas.

It’s a common dish to find in Mexico City. 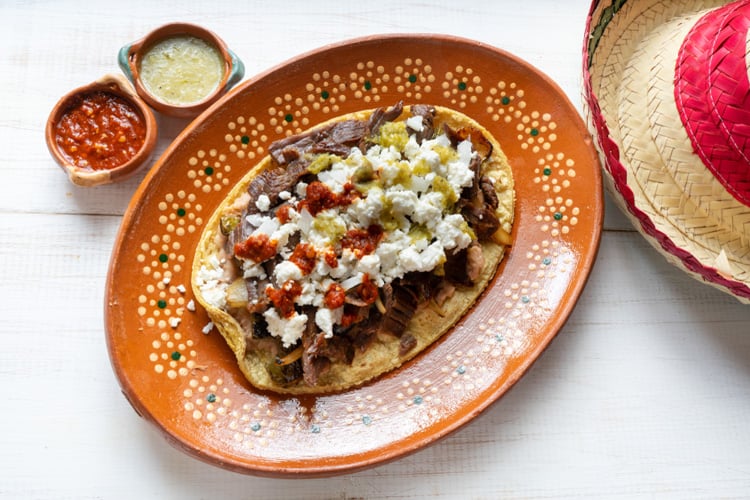 Tamales is a popular dish in Latin America. It’s a traditional Mesoamerican dish that’s believed to originate in Mexico.

This dish is made of masa or dough that’s seemed in banana leaf or in a corn husk. 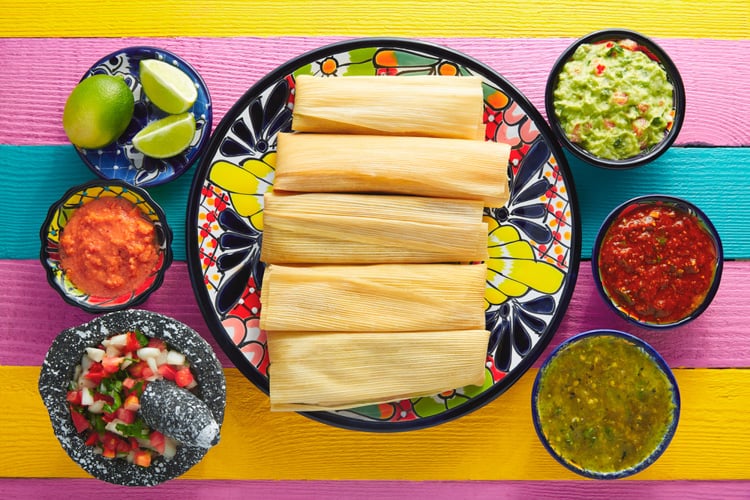 Taquitos, also known as flautas, is a Mexican dish that’s made of tortilla bread filled with chicken, beef, or cheese.

The tortillas are rolled up, deep fried, and served with some guacamole and sour cream.

It’s a delicious and popular food from Mexico! 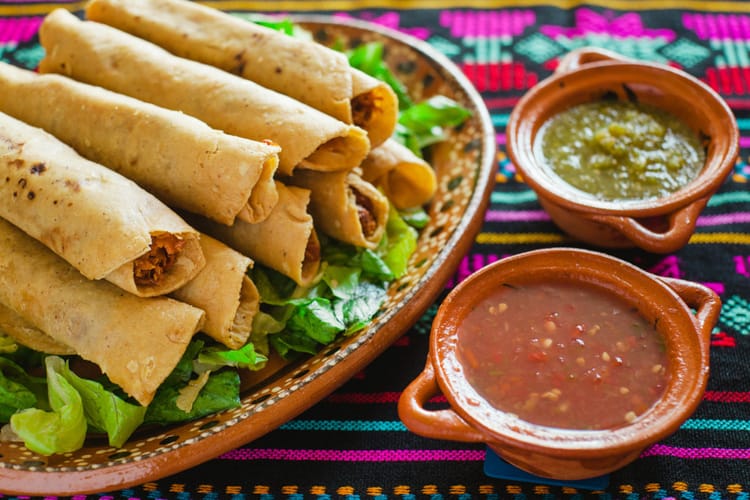 Frijoles charros is a traditional Mexican food named after the Mexican cowboy horsemen known as charros.

This dish is made of pinto beans that are stewed with onions, garlic, and bacon. Other common ingredients also include chili peppers, cilantro, tomatoes, sausage, pork, chorizo, and ham. 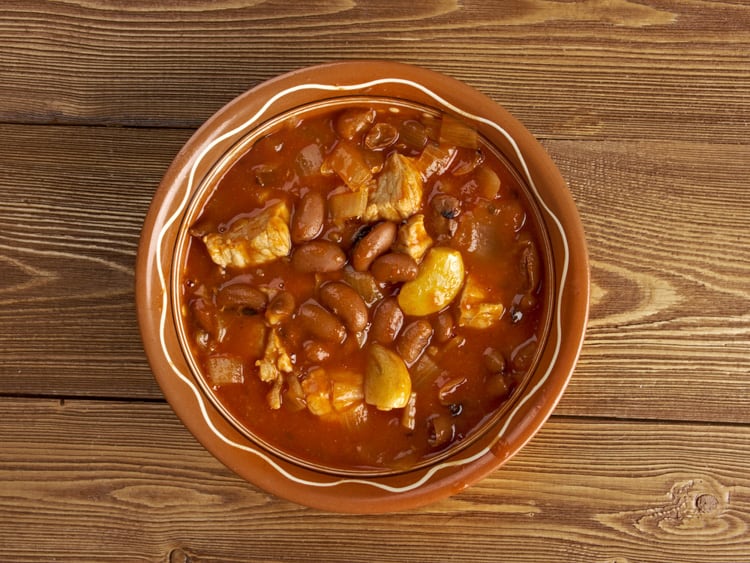 Nachos is a dish that comes from Northern Mexico and consists of heated tortilla chips covered in melted cheese.This is a dish that’s often served as a snack or an appetizer in restaurants.

Today there are several variations of nachos, where some dishes are served with jalapeños, salsa, meats, and beans as well.

It’s one of the most well-known food from Mexico! 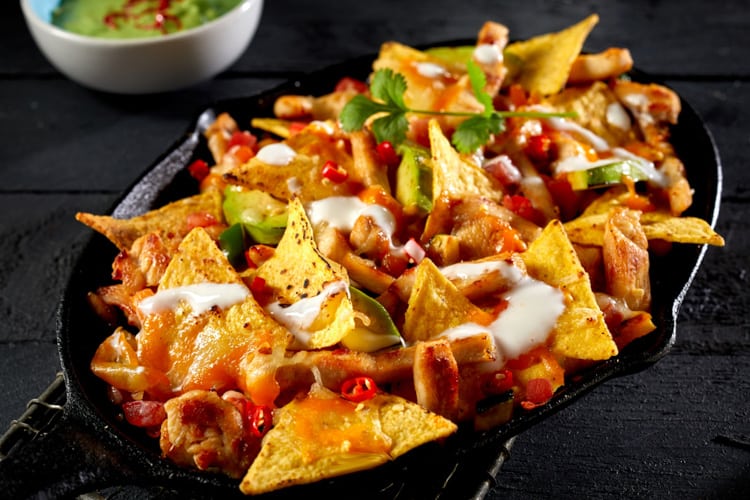 When it comes to Mexican food you simply cannot leave the country without tasting some quesadillas. Quesadillas is a classic dish that’s made of corn our flour tortillas filled with cheese, but can also be filled with meats, onions, and vegetables.

It’s one of my favorite Mexican foods for lunch! 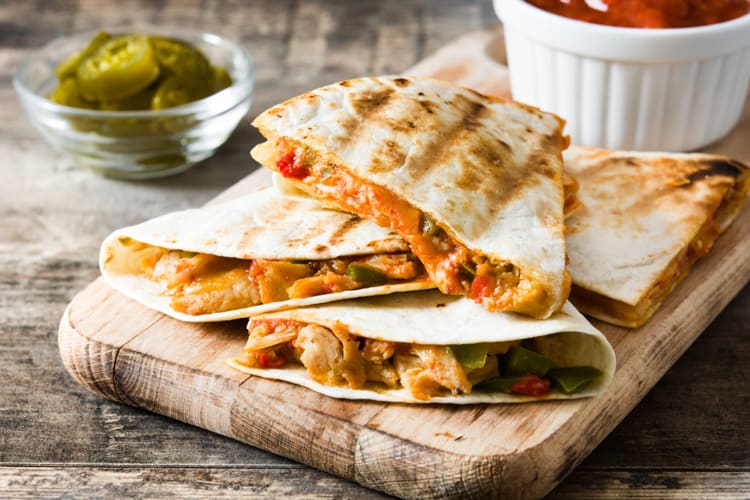 Cemita refers to a Mexican style sandwich that comes from Puebla. The name comes from the bun itself (cemita), that’s usually filled with fried beef, chicken or pork cutlet.

It’s a classic thing to eat if you’re in the Puebla region of Mexico. 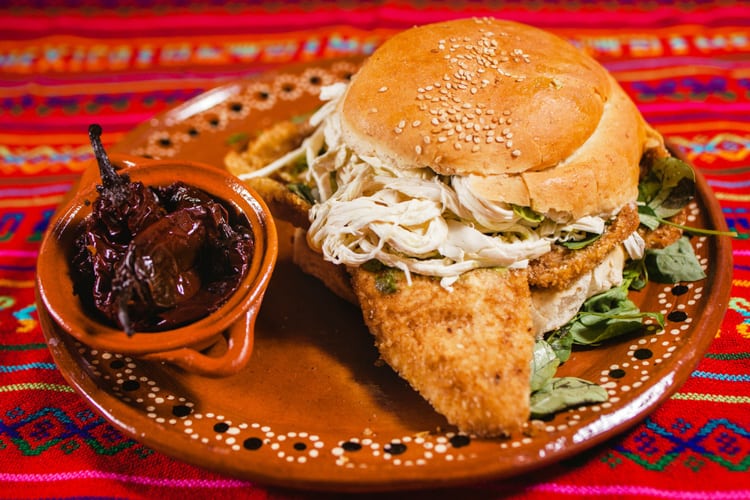 Tlayuda is a Mexican food of the Oaxacan cuisine and consists of a large, thin, and crunchy tortilla topped with refried beans, asiento, avocado, cabbage or lettuce, meat, Oaxaca cheese, and salsa.

When you’re in Oaxaca City, make sure to taste this classic dish! 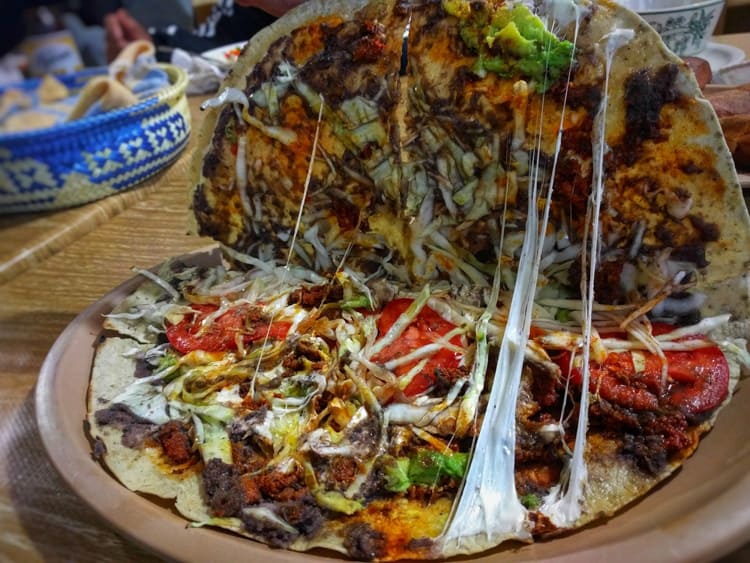 Mixiote is a dish that comes from central Mexico. It’s made of meat such as mutton or rabbit, chicken, lamb or pork seasoned with chili peppers, cumin, thyme, marjoram, bay leaves, cloves and garlic.

The seasoned meat is wrapped into small packages and traditionally pit-barbecued, but can also be cooked in the oven. 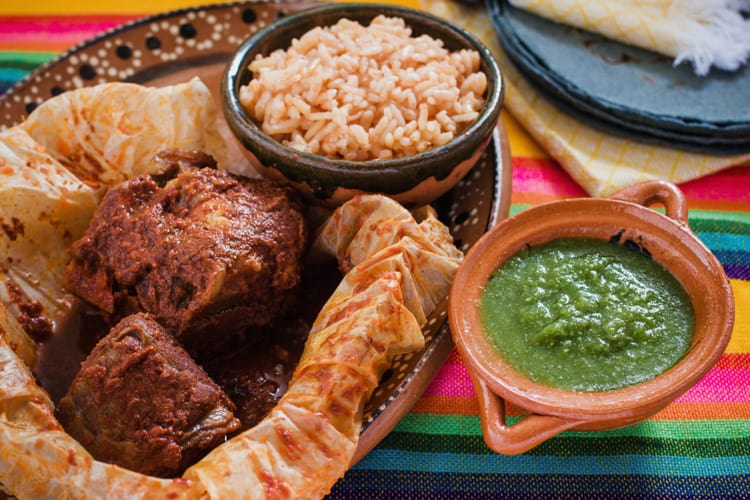 Manchamanteles is a Mexican stew made of meat, chili peppers, vegetables, and fruits. 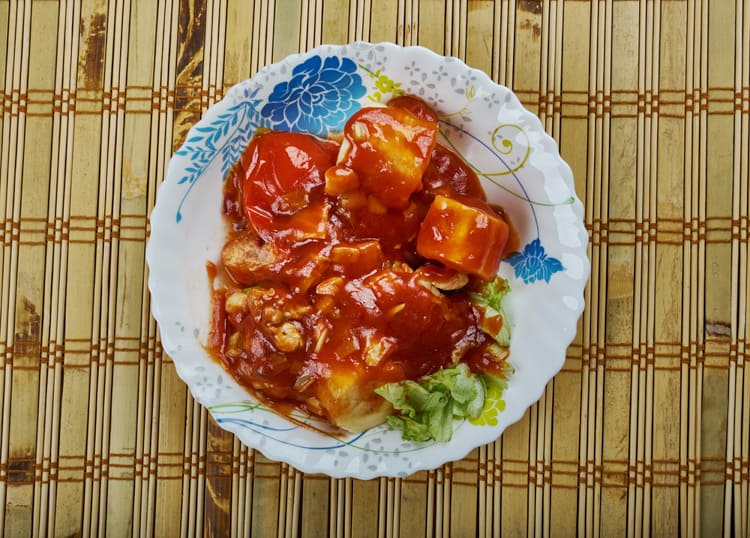 Gordita is a pastry stuffed with meat, cheese or other types of fillings.

There are two types of the Gordita in Mexico. One is fried in a wok-shaped comal (type of pan) and the other is baked on a regular comal.

The fried Gordita is most popular in the central and southern parts of Mexico. 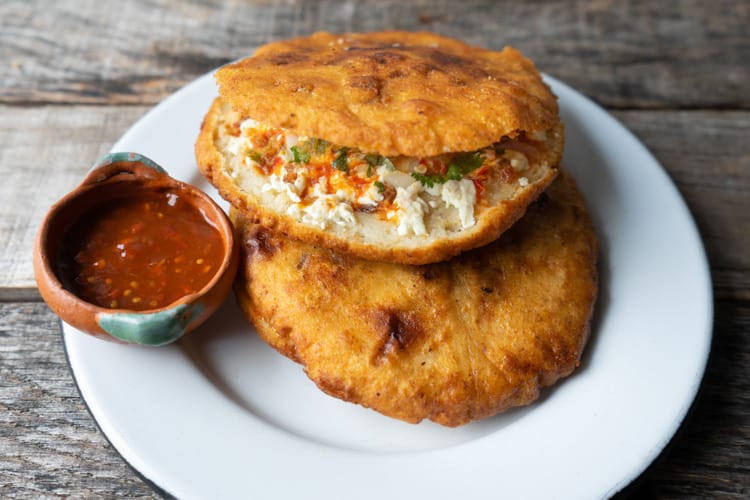 The Mexican cuisine is one of the oldest in the world and date back 9000 years.

Some of the basic staples in the Mexican cuisines include corn, beans, squash, and chili peppers. Meat and dairy products, as well as some herbs and spices also became staples after the Spanish conquest of the Aztec Empire during the 16th century.

Today you can find several traditional dishes with these ingredients in both street stalls and restaurants around the country. The local people are very passionated about food, and that’s something you really can feel when tasting their food.

What’s the national dish of Mexico?

Mole is the national dish of Mexico.

The breakfast in Mexico varies from person to person. However, some of the most common breakfast ingredients include beans, eggs, sweet bread, salsa, tortillas, and coffee.

Toasted bread and scrambled eggs with beans are also common to eat for breakfast in Mexico.

Down below you have a list of Mexican desserts and sweets to taste during your stay in Mexico: 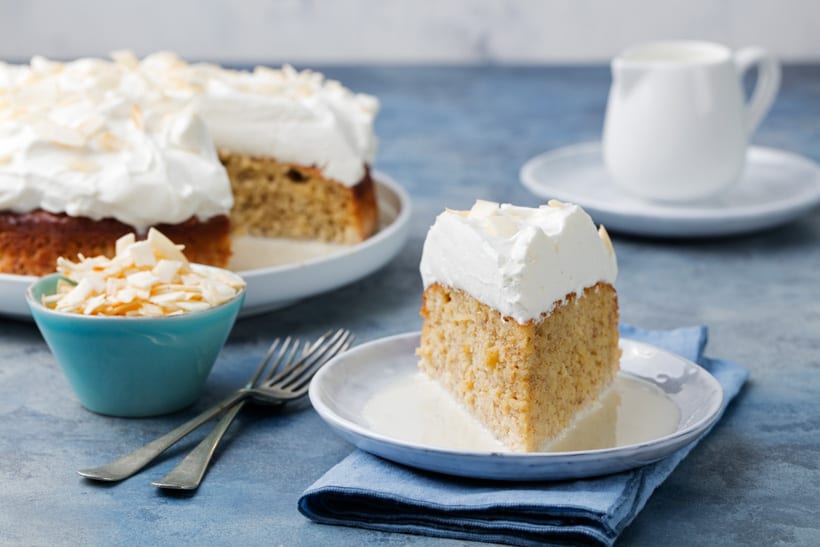 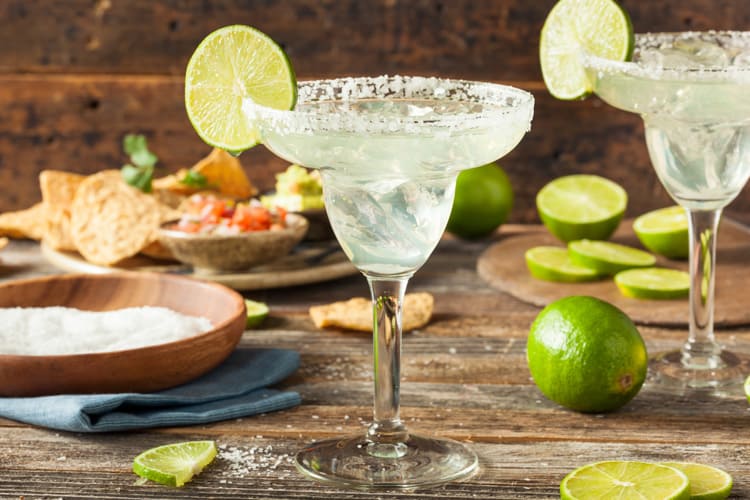 Street food, also known as antojitos, is prepared by street vendors at the traditional markets in Mexico. The street food is delicious and usually very cheap with lots of dishes to choose from.

Here’s a small list of popular and common street food in Mexico: 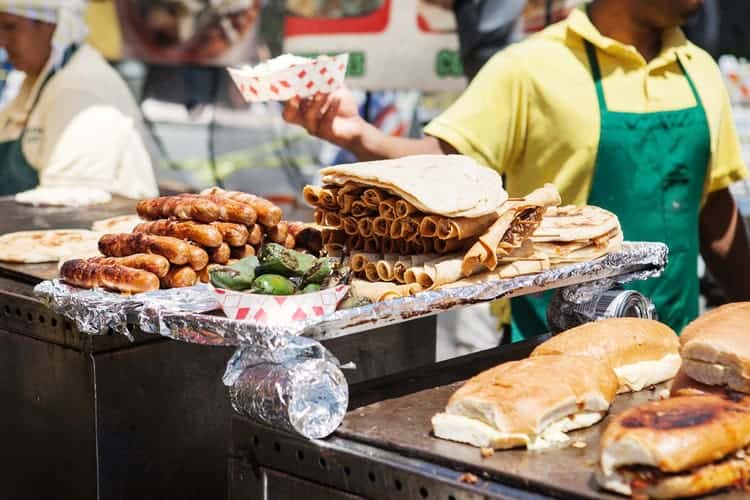 In most households in Mexico, Christmas Eve (also known as Noche Buena) is a bigger deal than Christmas Day.

During this day families gather to sing songs, open presets and eat lots of delicious food. Some of the most common Mexican Christmas dishes include: 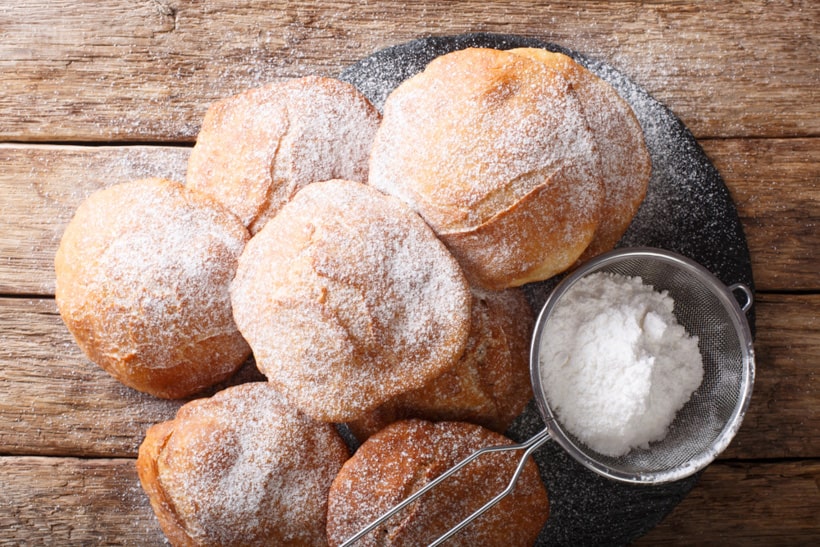 Do you have more questions about Mexican food and cuisine? Leave a comment below!