Want to know more about Nepalese food and cuisine? Nepal is a wonderful country when it comes to food. I’ve myself lived with a local family in Kathmandu in Nepal and tired several homemade dishes.

The Nepalese cuisine is a bit different, but full of interesting and delicious dishes for you to taste during your stay. Down below you can read more about Nepalese food and its traditional dishes:

The dish Gorkhali is a winter favorite in Nepal. It’s made of slow cooked lamb in a rich curry with potatoes and onions.

Gorkhali Lamb is often served with rice or roti to scoop up the curry.

Dal Bhat is considered to be the national dish of Nepal, since it’s a dish the locals eat every other day.

This dish consists of rice that’s served with various side dishes. The side dishes to the rice include dal (lentil soup), pickles, curries, meat or fish, yoghurt, and chutney.

Sometimes the rice is replaced with roti, and sometimes you’ll get both.

Dal Bhat is a dish that varies from restaurant to restaurant and home to home. There are several variations of this dish where the locals simply switch out some of the small side dishes.

This was one of the meals I had when staying with a local family in Kathmandu, and I must say that it was delicious! 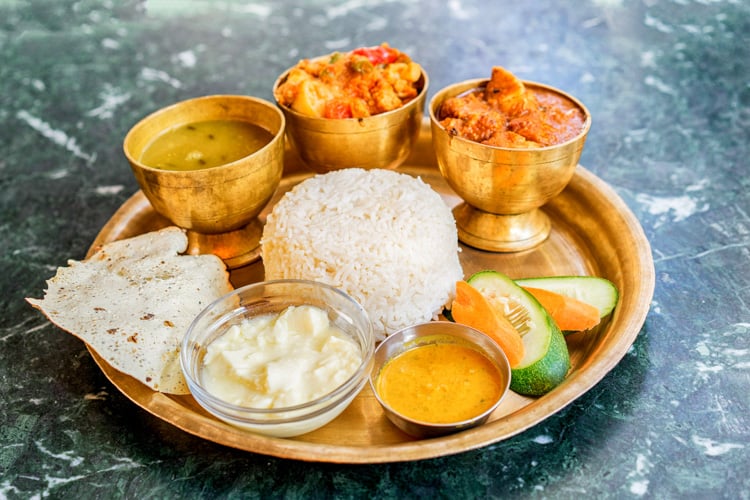 Bara, also known as ”bada”,  is a snack that comes from the Newaris, which is a Nepali ethic group in the Kathmandu Valley.

Bara is a thick and savory pancake made from rice flour. The locals eat it plain, with minced buffalo meat, or with an egg cracked on top.

Momos is one of the most popular dishes in Nepal, both among the locals and tourists.

One of the best things about momos is that they’re always fresh and hand-made. Sometimes it can take quite long time to get this dish at restaurants, but I promise you, it’s well worth the wait. 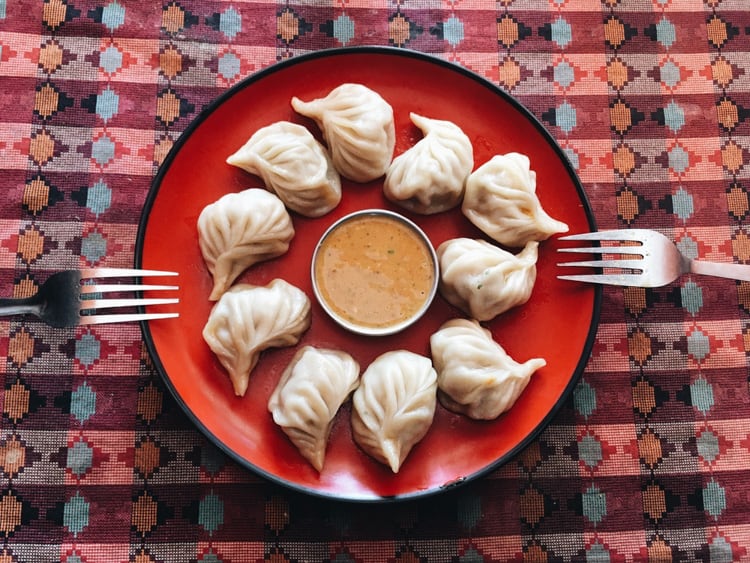 Sandheko is a spicy salad made with lots of chillies, onion, fresh coriander, potatoes or peanuts, and several spices.

This dish is served cold and is simply delicious – so make sure to taste it!

Sel Roti is something that I ate everyday when I traveled in Nepal. It’s a round type of bread (like a mix between a bagel and a doughnut) made from rice flour.

This piece of bread taste like no other bread in the world. It’s simply unique and delicious.

Sel roti is baked and made into a circular shape and then deep-fried in oil. It’s crispy on the outside and soft and fluffy on the inside.

It’s perfect to eat for breakfast or as a snack when you’re out exploring in Nepal. 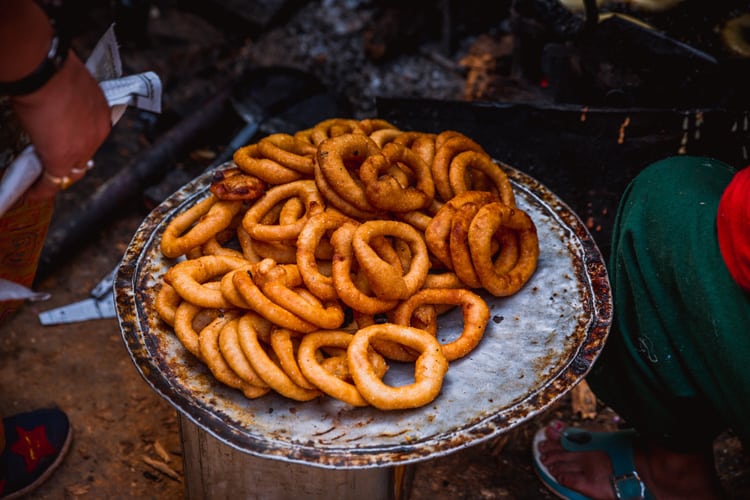 Dhido is a traditional Nepali meal. It’s a cooked paste of buckwheat flour looking like a thick porridge on the plate.

Traditionally you eat it with ghee or butter that you mix into the Dhido with your hands.

It’s a local favorite and a must to taste when it comes to Nepalese food.

Pulao is a Nepalese dish that’s made from fried rice, vegetables, and spices such as turmeric and cumin. This dish is served with various side dishes that can vary from restaurant to restaurant.

Pulao is a staple in the Nepalese cuisine and is a must to add to your Nepalese food bucket list! 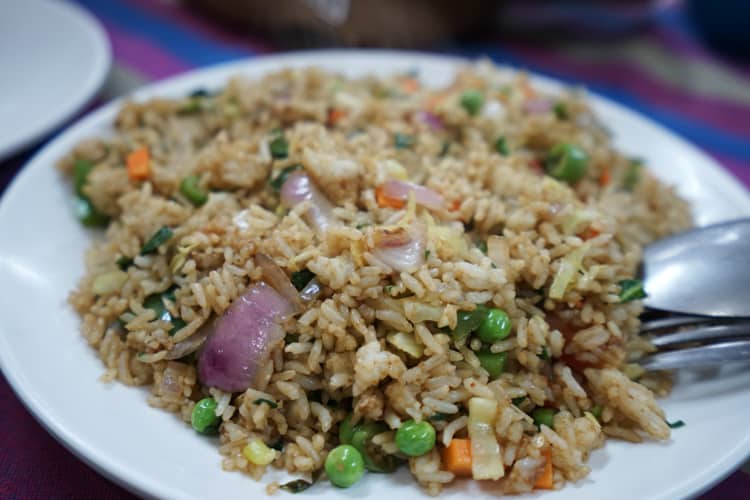 These pointy and fish-shaped dumplings has its own festival in Nepal, known as Yomari Punhi. They’re made from rice flour and stuffed with a sweet molasses or coconut mixture.

If you happen to be in Nepal in the end of December, it can be fun to taste one of these sweet dishes.

Thukpa is a hot noodle soup made with meat and vegetables. It’s popular to eat during the cold winter months in Nepal since it’s such a warming dish.

This Nepalese soup is often eaten together with the popular momo dumplings. 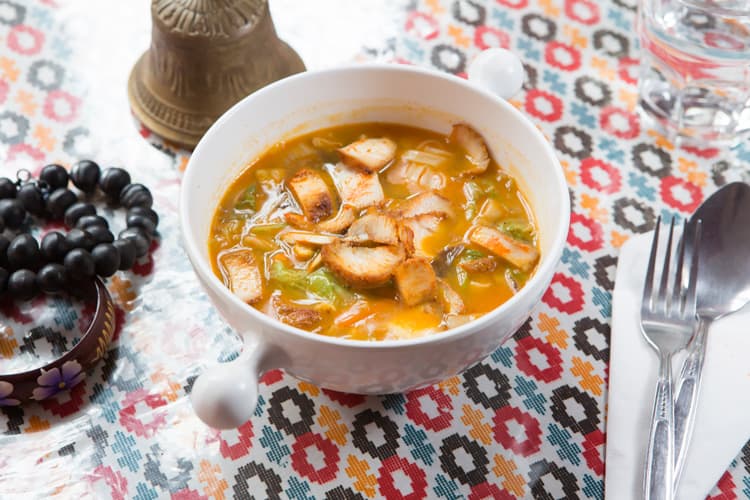 Gundruk is a dish that’s popular all over the country. It’s made of fermented leafy green vegetables and has a unique and salty taste – unlike anything you’ve ever tried before.

This dish is a popular addition to the Nepalese curries, and is sometimes served as a side dish to Dal Bhat.

Chiura is rice that has been beaten flat and dried. It’s quite dry to eat as it is, but is a good addition to a Nepali curry.

NOTE: Chiura swells up in your stomach, so you can feel very full after eating this dish. 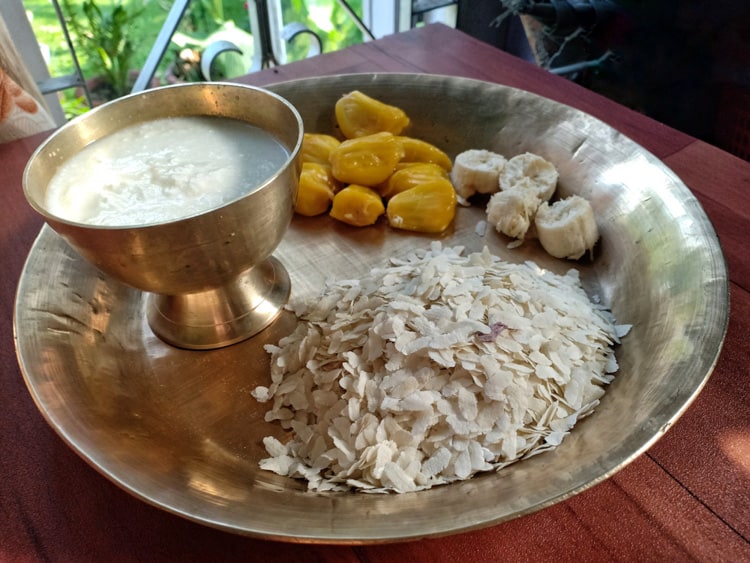 The Nepalese food have been strongly influenced by both the Tibetan, Indian, and Chinese cuisine. They’ve taken lots of inspiration from their dishes, but put their own unique touch to it.

Nepalese food is usually not so spicy and is both healthy and delicious.

Beef is not common in Nepal since it’s illegal to kill cows. Their meat dishes are often made from chicken, pork, mutton, or buffalo.

What’s the national dish of Nepal?

Dal bhat is the considered to be the national dish in Nepal.

What is a traditional meal in Nepal?

A traditional Nepalese meal often consist of dal, which is a soup made of lentils and spices, rice, and vegetables. 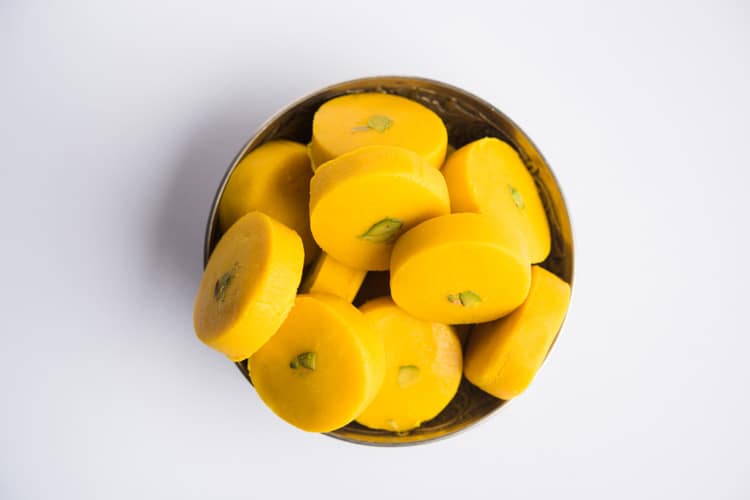 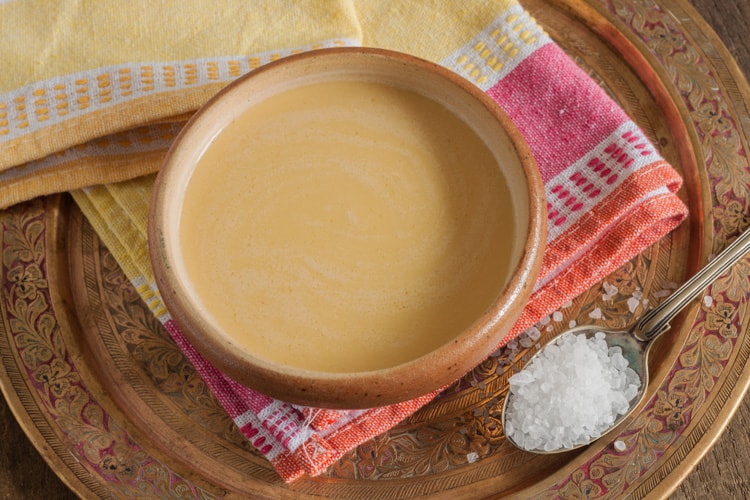 Do you have more questions about Nepalese food and cuisine? Leave a comment below!