A Complete Guide to Osaka Castle

Osaka Castle is one of the most beautiful and famous castles in Japan. It’s from 1583 and has played a big role in the history of the country.

It’s a place where you can stroll around in beautiful environments, take magical photos, and learn about interesting history.

Down below you can read more about the castle and useful information before visiting:

The story behind Osaka Castle

The history of the castle began in 1583 when it was built by Hideyoshi Toyotomi. It was built on the former site of Honganji Temple.

The castle was Hideyoshi Toyotomi’s stronghold, and he succeeded to stop the wars that had been going on for more than one century and unifying the entire nation.

After Hideyoshi’s death in 1598, his chief retainer Ieyasu Tokugawa became the new Shogun (military leader). Ieyasu Tokugawa was the person who established the shogunate government in Edo (Tokyo).

The year of 1615, Ieyasu Tokugawa ruined the Toyotomi family and destroyed the castle during the Summer War of Osaka – both the stone wall and the watchtower were burned down.

What you can see today are the restored versions that they renovated during the Edo Period.

Throughout history, the Osaka Castle has been the battleground of major wars in Japan. It’s a historic Japanese site, and therefore it’s so popular among both locals and tourists. 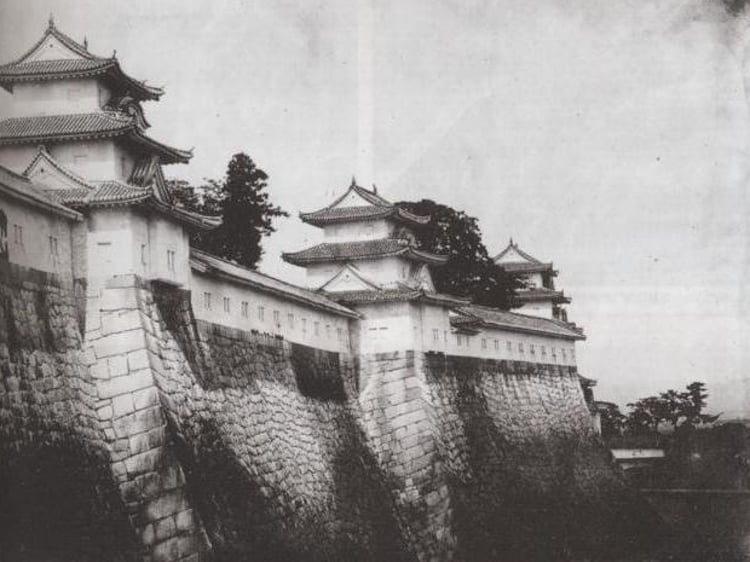 The castle museum and observation deck

The main attraction at Osaka Castle is the castle museum and observation deck that’s located inside the castle.

The museum covers eight floors and displays the history of the castle. Inside you can see historical artifacts, paintings, and samurai costumes (that you can try on for a fee).

At the eight floor of the castle, there’s the observation deck where you have a magical view of the city.

It’s a nice museum to visit if you want to learn more about the castle and its history. It’s great for both children and adults! 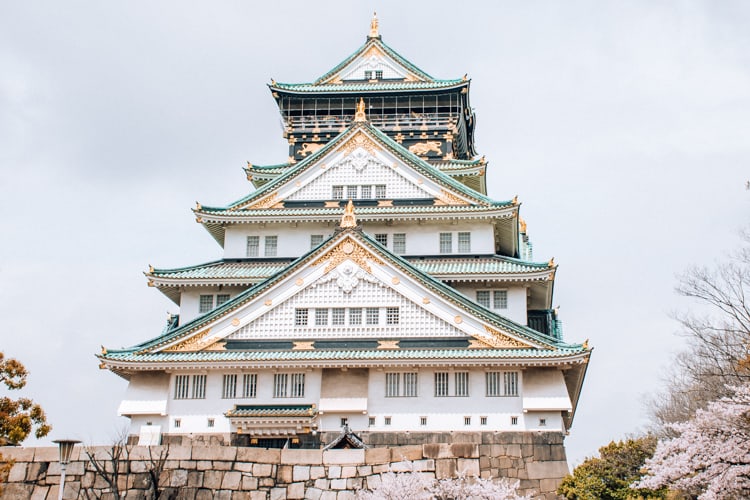 When visiting Osaka Castle, make sure to take your time and stroll around in the castle park. There are so many beautiful places to see, such as the castle pond that you can see in the picture below. 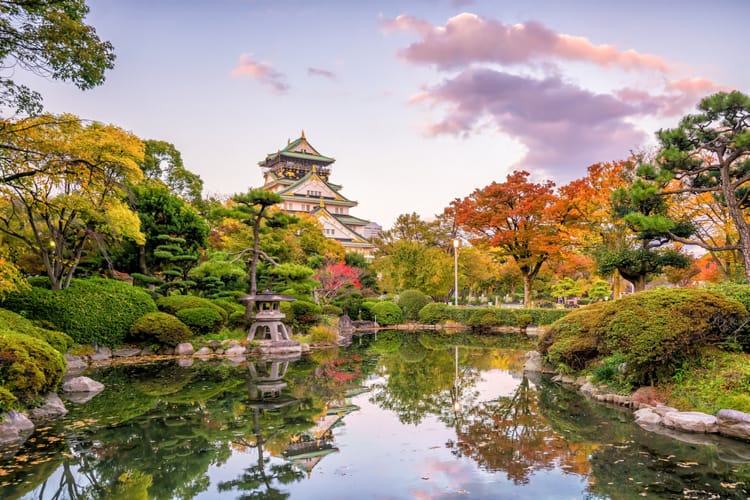 If you visit the castle after sunset, you’ll be able to see the illumination. Until 11pm every day, you can see the castle lit up by lights. It gives another perspective to the castle with a mysterious atmosphere. 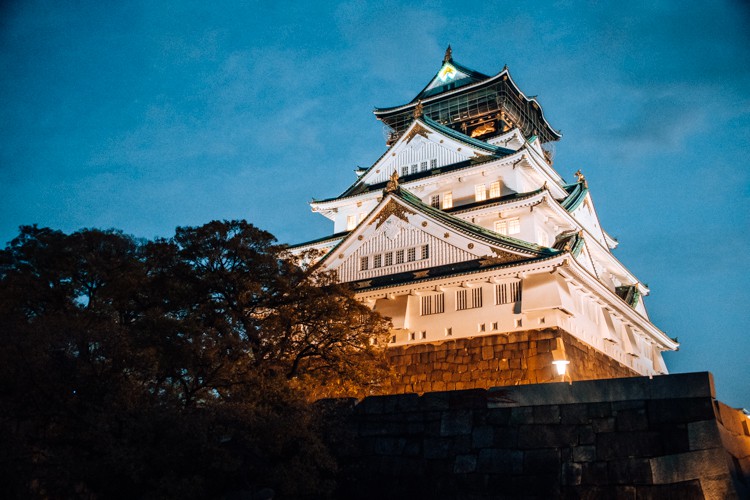 The stone wall and moats surrounding the castle are some of the most impressive things to see while visiting.

Next to the stone wall there are the moats that are around 70-90 meters in width. One of the most beautiful things about these moats is that you can see the reflection of the castle on a calm day.

It’s also possible to take a boat tour around the moats, which is another popular thing to do at the castle. 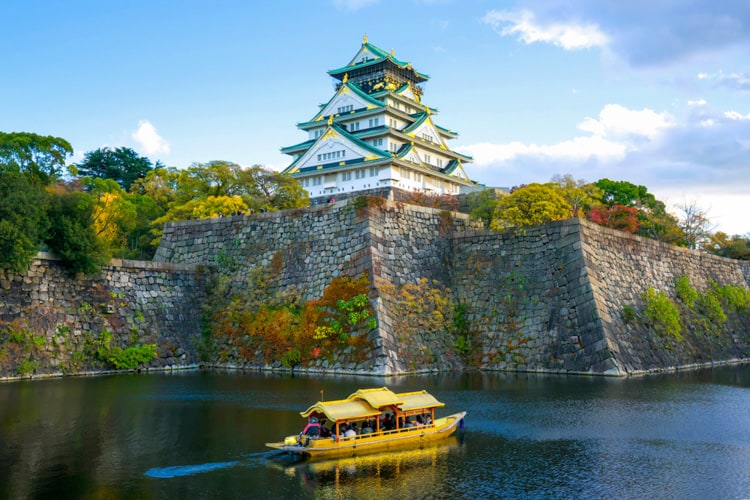 How much does it cost to visit Osaka Castle?

The castle park is free to visit, but to go inside the castle you have to pay a small fee.

If you’re going in a larger group you get a discount depending on how many you are. For the group discount you have to be 15 persons or more.

If you’re planning to visit Osaka Castle, it can be nice to know how it looks during the different seasons of the year. Two of the most popular times to visit is during koyo (autumn foliage) and sakura (cherry blossom in spring), however, it’s beautiful during winter and summer as well.

Spring is one of the most popular seasons to visit Osaka Castle. It’s during this season that you can see the cherry blossom, also known as sakura in Japan. The area around Osaka Castle turns pink, which looks absolutely magical.

There are no exact dates for sakura in Osaka, since it all depends on the temperature and weather each year. 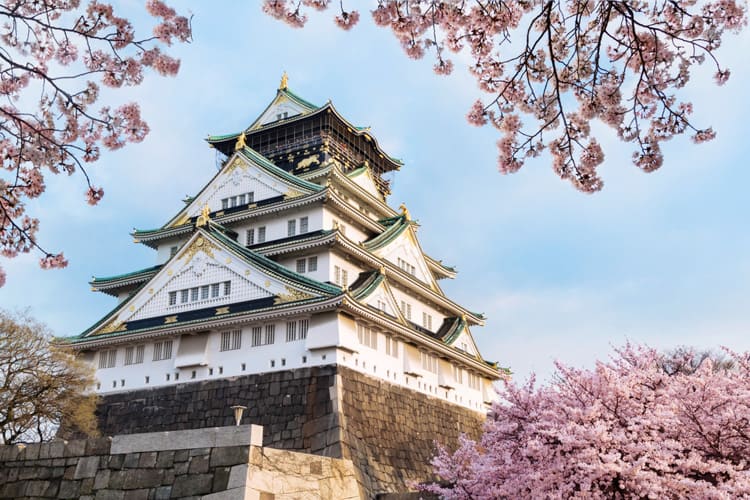 If you’re around in Osaka during summer you’re going to see the castle surrounded by green lush nature. The weather is warm and nice, and the surroundings are absolutely beautiful. 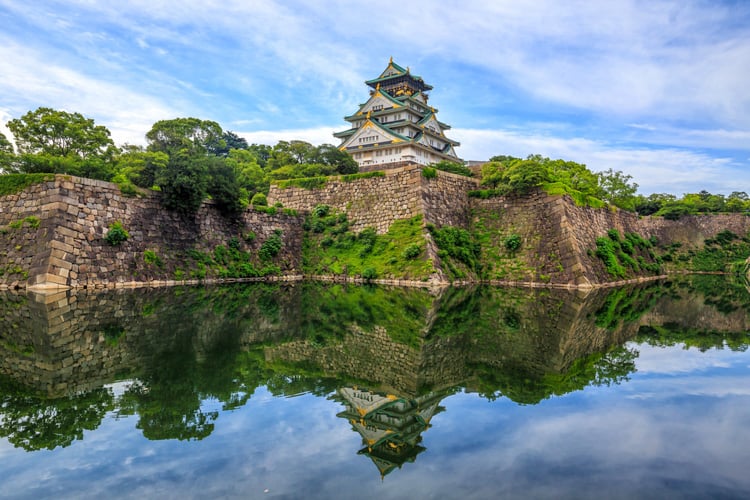 If you’re planning to visit Osaka in Autumn you might be lucky to see the beautiful autumn foliage, also known as Koyo in Japan.

The nature around Osaka Castle turns from green into red, orange and yellow colors. It’s magical and one of my favorite times to visit the castle. 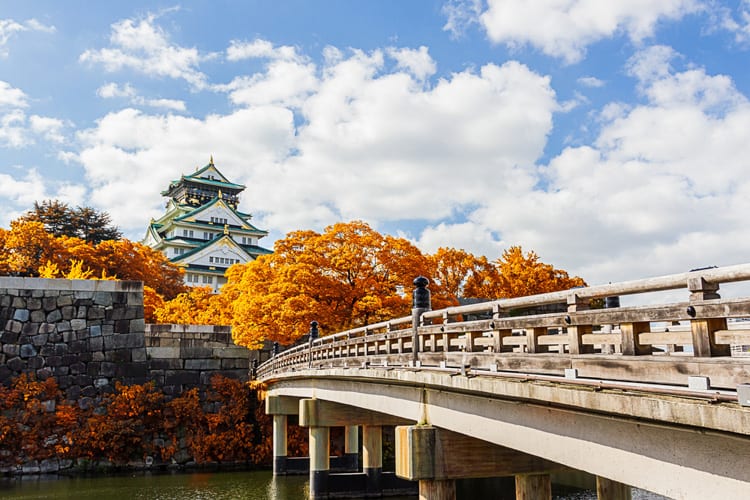 Winter might not be the most popular or beautiful time of the year to visit the castle. The trees has lost its leafs and it can look pretty dull.

However, when the trees are covered in snow this place looks fairytale-like.

So if I would visit during the winter, I would go during the coldest and most snowy days of the year to see it all covered in snow. 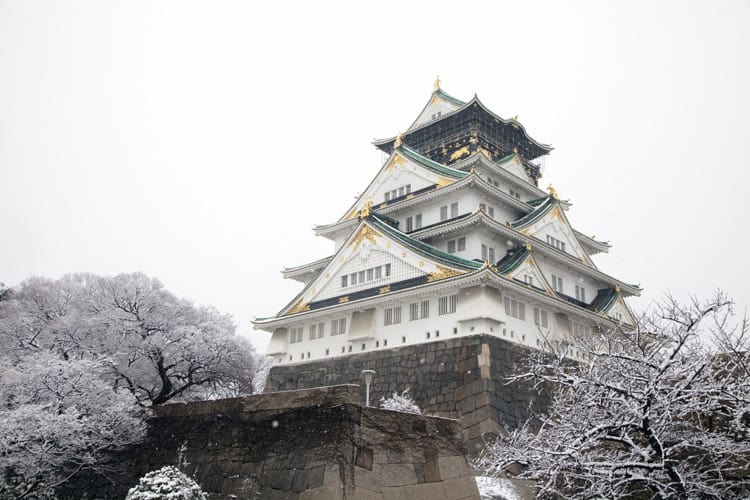 There are 8 stations that are close to the castle, but I can recommend going to one of these two stations:

This is the station that’s closest to the main gate, also known as Ootemon. First you catch the Tanimachi Line and then hop on the Chuo Line to reach Tanimachi Yonchome Station.

This is no doubt one of the best way to get to the castle if you want to start exploring from the main entrance.

If you don’t want to change lines to get to Osaka Castle you can go directly from Osaka Station to Osakajo-Koen Station.

Osakajo-Koen Station is the last station of the Osaka Loop Line, and takes around 10 minutes to reach.

The hop on hop off bus

You can also access the castle via one of the hop on hop off buses in Osaka. You can catch busses to different location and attractions in the city, including the Osaka Castle.

This is a good hotel if you want to have a simple hotel room during your stay in Osaka. It’s located near Osaka Castle, as well as the metro.

Hotel New Otani Osaka offers one of the best views of Osaka Castle in the city.

This luxurious hotel also features an indoor spa, fitness facility, a restaurant with a magical view of the city, and a delicious breakfast buffet. It was built by Toyotomi Hideyoshi, the military leader, in 1583.

How old is Osaka Castle?

How big is Osaka Castle?

How many floors does Osaka Castle have?

It’s five stories on the outside, and eight stories on the inside. Each floor is filled with interesting exhibitions where you can learn about the history of the castle.

What is Osaka Castle famous for?

Osaka Castle is one of the most historic castles in the country. It has played an important role in the unification of Japan during the samurai era in the 16th century.

Today it’s a symbol of Osaka in the Kansai region of central Japan.

Can you go to Osaka Castle at night?

Down below you have a map of Osaka Castle. If you have a pocket wifi during your stay in Osaka, you can use Google Maps to find it easier.

Do you have more questions about Osaka Castle? Leave a comment below!