Want to know more about Peruvian food and cuisine? Peru is considered to be one of the best countries in the world for food lovers. The capital of Peru, Lima, is often referred to be the culinary capital of South America.

Here you can taste everything from fusion food to traditional dishes that date back to the Inca Empire.

The Peruvian cuisine is full of interesting dishes with incredible flavors – all so delicious that you’re going to wish you had more time to explore the food scene in Peru. Here are 12 traditional dishes that you can taste in Peru for a local experience:

Lomo Saltado is a mix between the Peruvian and Chinese cuisine. It’s made of strips of beef marinated in soy sauce and stir-fried with onions, tomatos, aji chillies, and different kinds of spices.

Lomo Saltado is one of the most popular dishes in Peru. It’s a must to add to your Peruvian food bucket list. 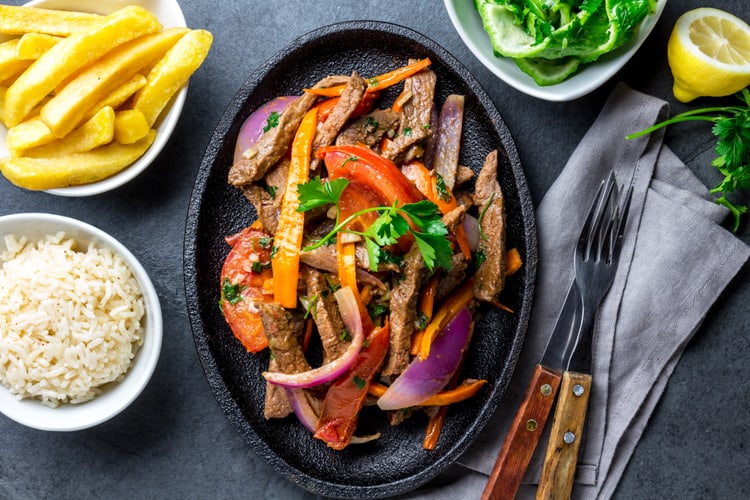 Papas a la Huancaína is made of sliced golden potatoes that are drowned in a sauce of queso fresco, garlic, evaporated milk, aji amarillo, lime juice, and saltine crackers. When ready, this dish is topped with an egg.

It’s a delicious dish that’s often served as a side dish to the main course, or as an appetizer.

This is another classic dish in the Peruvian cuisine. Aji de Gallina is made from slow cooked chicken and a sauce of walnuts, cheese, milk, and aji amarillo chillies.

It’s topped with a boiled egg and black olives, and is served with both rice and potatoes. 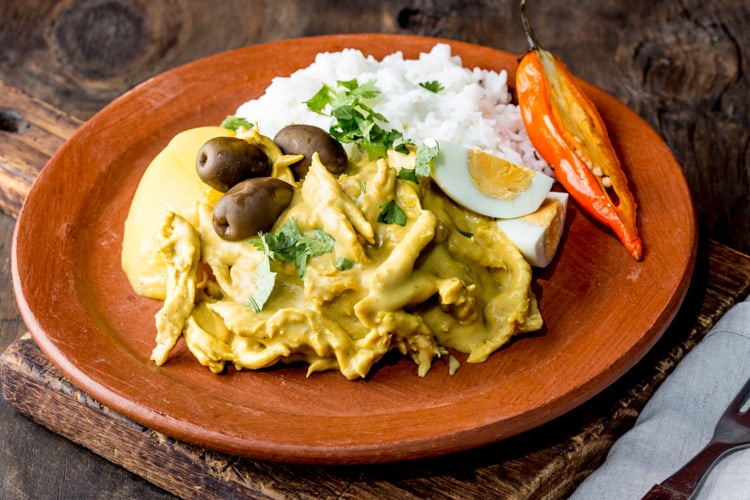 Ceviche is the national dish of Peru and is one of the most loved dishes in the country. When thinking of Peru, this is most likely the dish that comes to mind.

It’s made of chunks of raw fish cooked in lime juice. It’s spiced with chili, seasoned with salt, and served with sliced onions and coriander.

Sometimes other seafood such as shrimps, squid or octopus, and scallops is used to make a Ceviche. 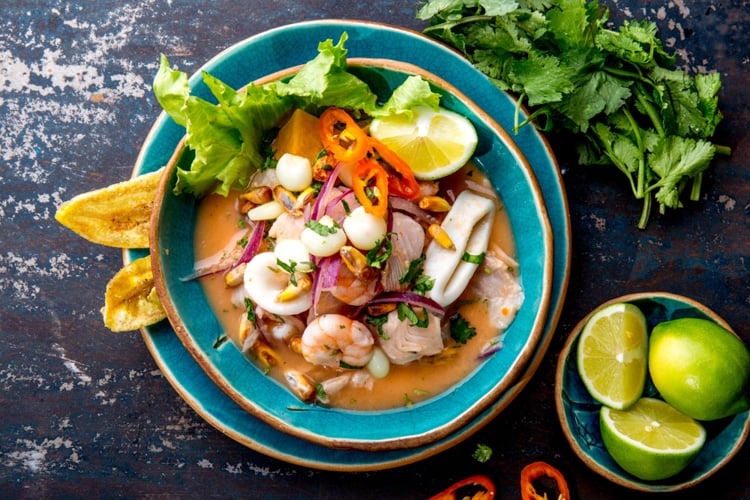 Cuy is a delicacy in the Andes and is made from a guinea pig grilled on an open fire.

Many people see this animal as a pet, and therefore several eyebrows are raised for this dish. However, the locals of Peru don’t see it any different from pork or beef. It’s normal for them to eat guinea pig. 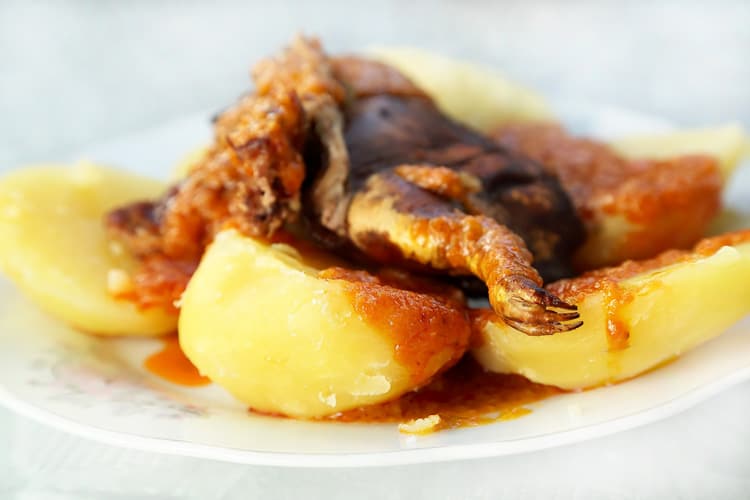 Grilled hearts of alpaca of beef is what Anticuchos De Corazón is made of.

The hearts are cut into cubes and marinated in vinegar, cumin aji, and garlic. They’re put on a skewer and grilled over charcoal to medium rare.

It’s a healthy food that’s considered to be more delicious than many other types of meat.

Arroz Con Pato is a Pervivan signature dish made of rice mixed with a cilantro paste, different kinds of herbs, and dark beer.

The rice is topped with a thigh of roasted duck, and is served at restaurants and in many households around the country. It’s a popular Peruvian food that’s a must to taste while you’re in the country! 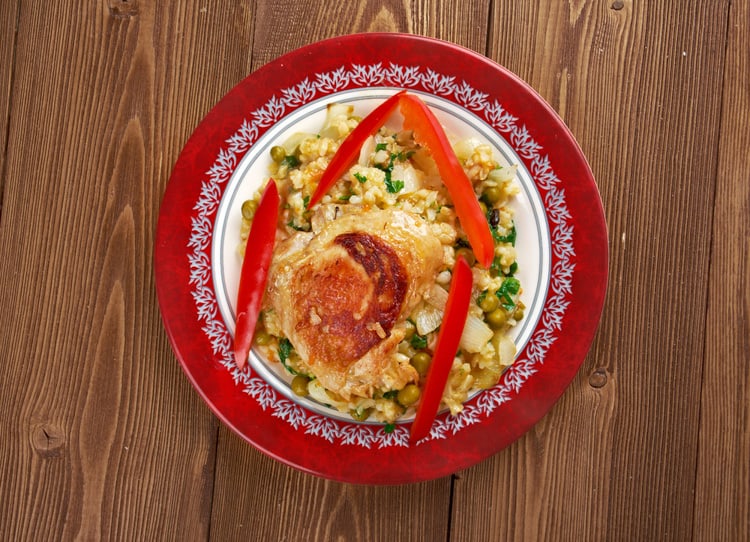 Rocoto is a type of spicy pepper. Its filled (relleno) with meat and vegetables and then baked in the oven.

The dish rocoto relleno is often served with French fries. It’s a classic dish to eat in Peru! 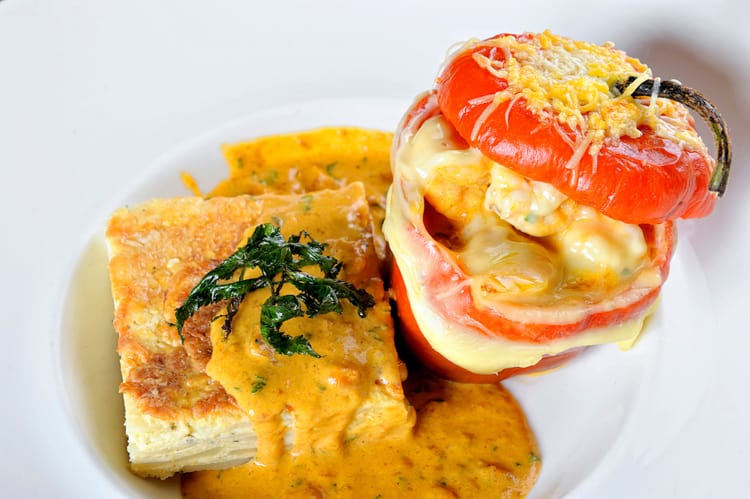 Pollo a la Brasa is made of chicken marinated for several hours in soy sauce with garlic, lime juice, paprika, and pepper. It’s then grilled on a wood fire or charcoal grill.

It’s served with a sauce on the side made from yellow aji amarillo chili, or green aji verde chili. 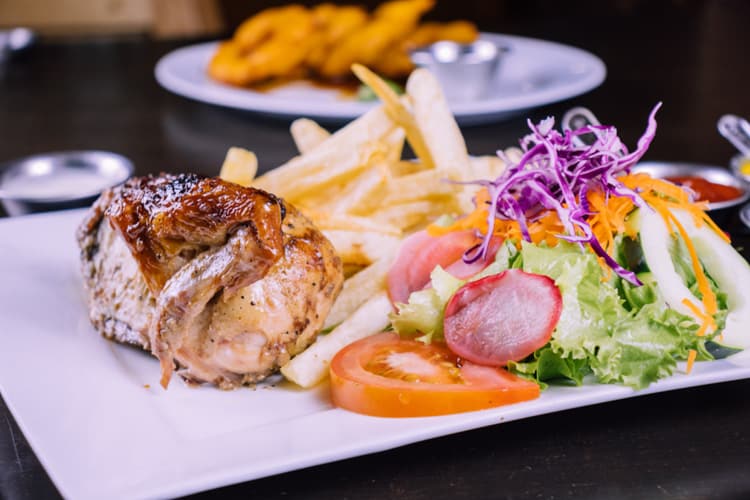 Tacu Tacu originated from the Afro-Peruvian population who came up with a dish from leftovers.

It’s like a patty made of mashed beans and rice, sometimes mixed with onions and spices as well. It’s fried until crispy, and can be served as it is or with a fried egg. Some locals eat this dish with some type of meat as well. 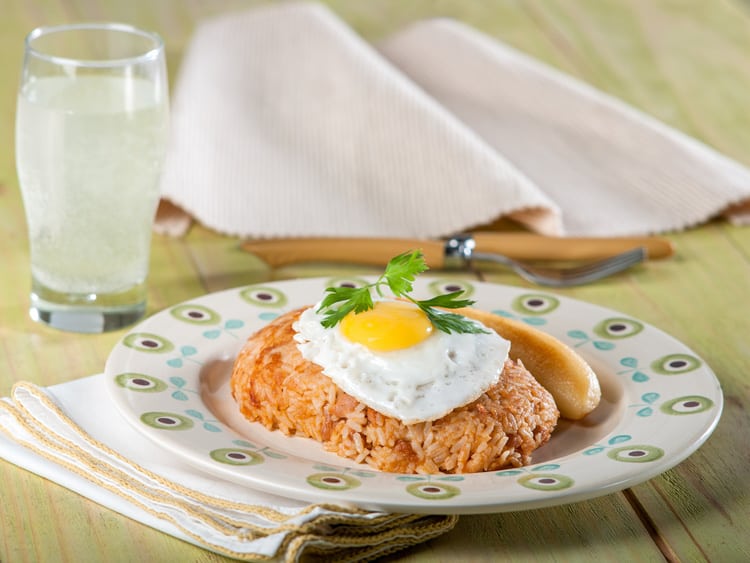 Causa is served cold as a light meal or as an appetizer. It’s made from yellow potatoes (which give it’s color), avocado, egg, celery, olives, and fish or chicken.

The ingredients are put in layers, which makes this dish look like a small cake.

It’s beautiful to look at, as well as delicious to eat. 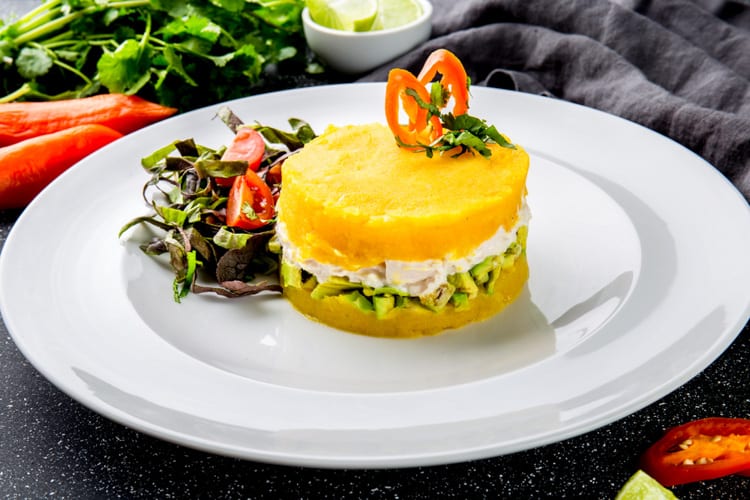 Ocopa is a typical Peruvian dish that originally come from Arequipa. It’s made from boiled potatoes with a sauce made from yellow chili (aji mirasol), sautéed onions and garlic, crackers, peanuts, and herbs such as huacatay and cilantro.

It’s topped with an olive and hard boiled eggs. Sometimes this dish is served with sliced lemon-marinated onions as well. 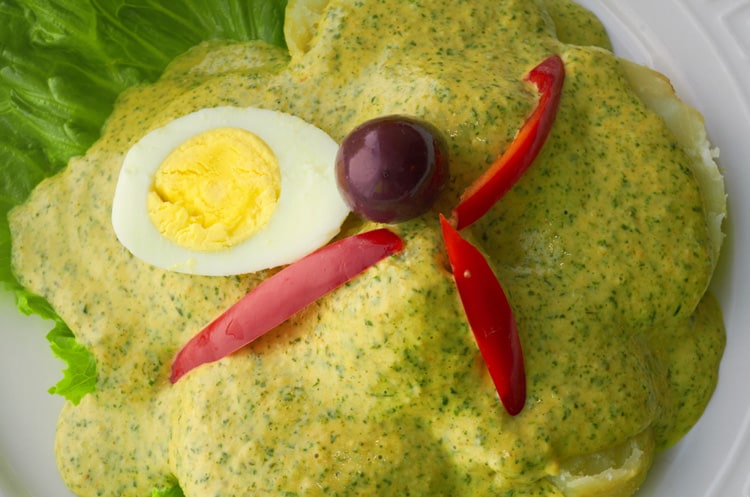 The Peruvian cuisine can be divided geographically into three branches; seaside, rainforest, and mountain. In these three areas you’ll find different types of Peruvian food – all with interesting ingredients and flavors.

Fish and seafood is common to eat along the coast of Peru, where they make all different kinds of delicious dishes. Ceviche is one of the most popular, and is the national dish of Peru.

Other meats that are common to eat is chicken, beef, and pork. One of the most popular ways to prepare the meat is to grill it over a wooden fire or charcoal grill.

Pachamanca is also a popular way to cook the food. The word means ”earth oven”, and is made by digging a hole in the ground and layering it with hot rocks to cook the food. Pachamanca has been a part of the Peruvian cuisine since the Incas, and is still used today during celebrations in the Andes.

Potatoes is another staple food of Peru. There are over 100 different kinds of potatoes in the country, and therefore it’s a common ingredient in the local dishes.

Other staples in the Peruvian cuisine include rice, hot pepper, lemons, and lime. 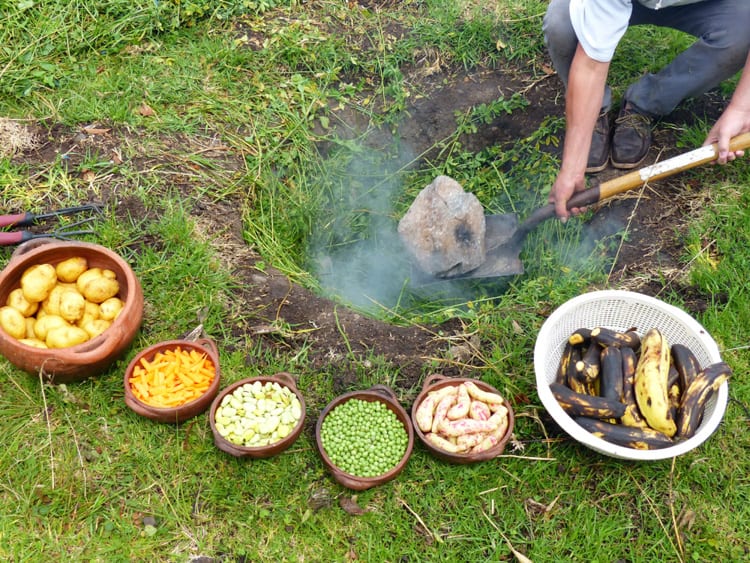 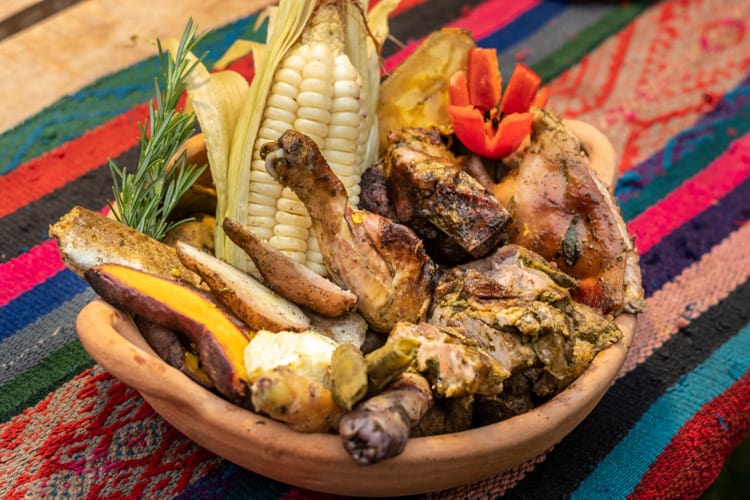 What’s the national dish of Peru?

Ceviche is the national dish of Peru. 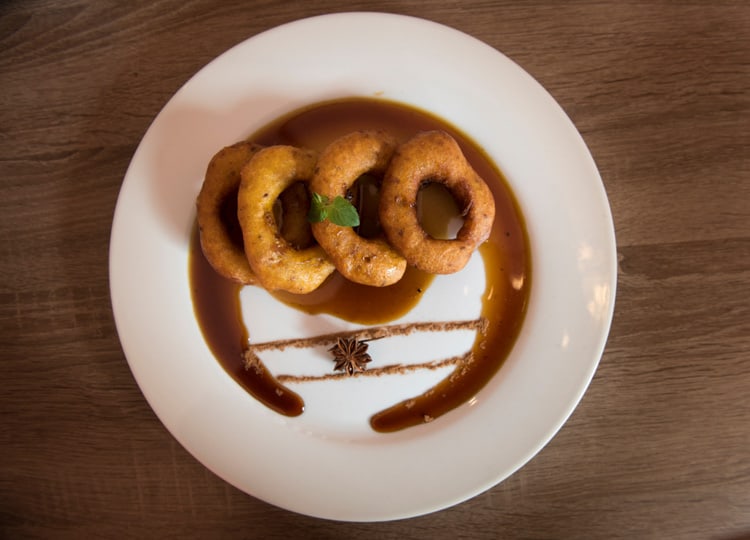 When you’re in Peru, there are a few Peruvian drinks that you have to taste. Below you have a few recommendations of local drinks: 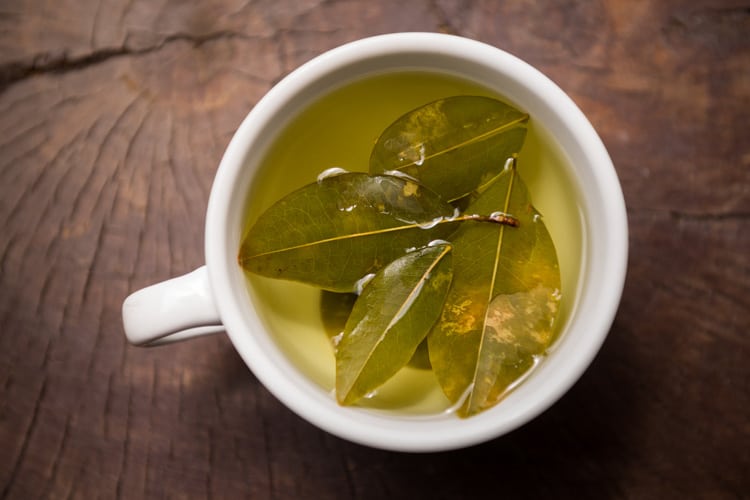 Do you have any other questions about Peruvian food and cuisine? Leave a comment below!