Purikura: A Guide to the Japanese Photo Booths

Want to know more about Purikura in Japan?

Purikura is a Japanese photo booth that has become one of the most popular activities in Japan – both among locals and tourist.

It’s a must to try while you’re in Japan, since it’s such a fun and typical Japanese thing to do.

Down below you can read more about purikura and useful information before using the photo booths:

Purikura is a Japanese photo booth where you can take lots of fun photos of yourself or together with your friends. It has become one of the most popular activities in Japan among the locals – mainly girls, young women, and couples.

At these photo boots you take digital photos that you later can edit and decorate on a touchscreen with various effects, frames, and stickers.

It’s a fun activity in Japan, so make sure to give it a try!

How does it work?

The first thing you have to do is to find an available photo booth and put in some money. There are different kinds of Japanese photo booths to choose between.

Most of the photo boots fit two people, but some are larger and holds up to five or six persons.

Above the money slot there’s usually a screen where you can choose different kinds of modes and styles after inserting the money.

Most of it is in Japanese, so it can be a bit difficult to understand what you’re choosing. However, they have pictures for everything so just choose what you think looks pretty and I’m sure that it will be good!

Some machines also gives you the option to enter your phone number and email address so you can get the photos to your phone. Alex and I tried this but it didn’t work for us, so I’m sure we did something wrong.

When you’re finished, it’s time to take some photos! 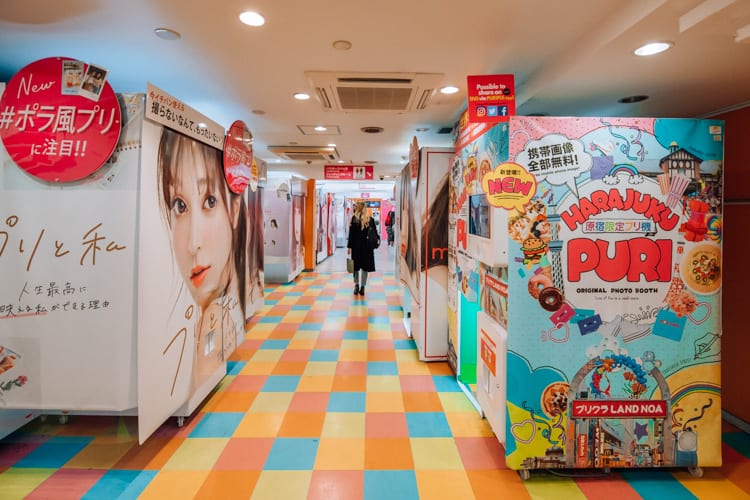 When you step inside the purikura booth a timer will start, so you have to be quick. Take of jackets and bags before you go inside so you’re prepared for all the photos.

As mentioned, most of it is in Japanese, but the machine will guide you with visual images on how to pose as well as counting down before taking the photo.

Alex and I followed most of the poses, and our photos turned out pretty funny!

NOTE: Several of the Japanese photo booths have green screens, so do not wear something that will make you blend in. 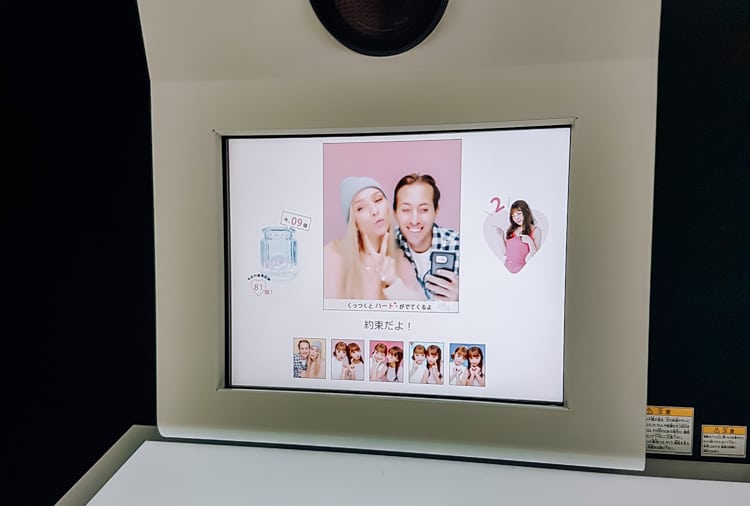 When you have taken the photos you go outside the purikura booth where you’ll find a screen to edit your photos. You can change backgrounds, add stickers, write texts, make your eyes bigger, change the color of your lips, add hearts, and cat ears, etc.

There are so many fun things that you can do with these photos. Just remember that you have limited time to edit your photos.

When you’re done editing and you’re time is out, the machine will print out your photo/s.

TIP: If there’s no one in line, the machine will give you more time to edit your photos. Then you’ll really have time to make them perfect! 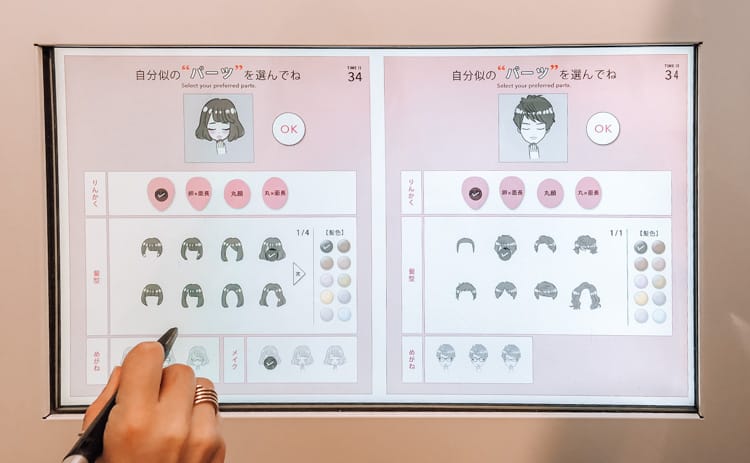 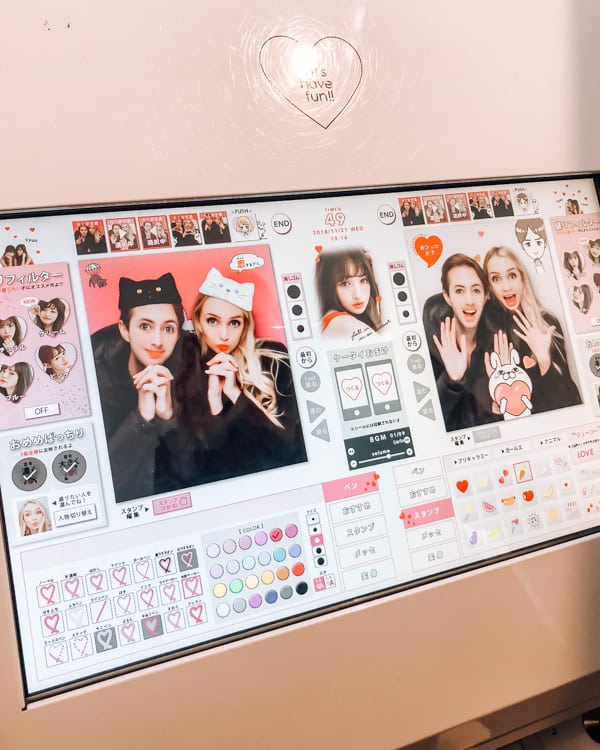 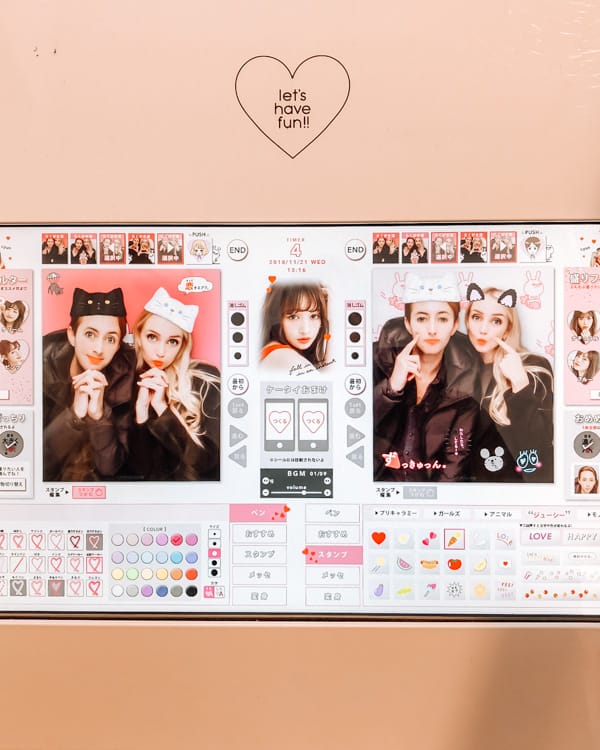 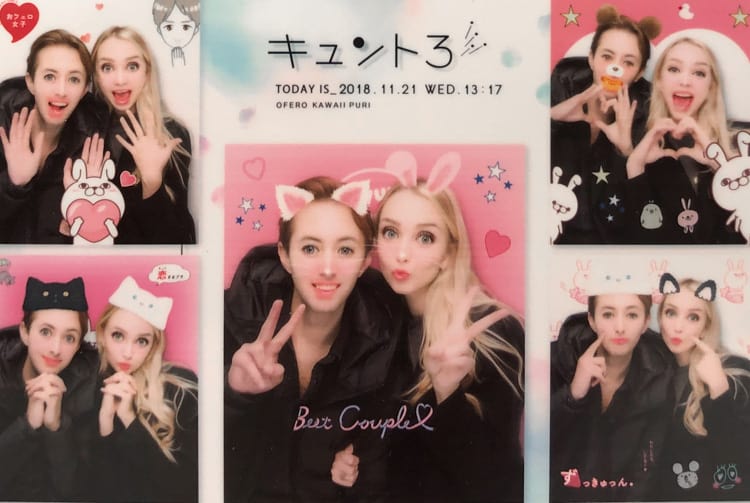 The different styles of Purikura

All around Japan there are different photo boots to choose from. There are photo booths that will make you look natural, some that turns you into a princess, and some with the more extreme look called gyaru.

At some places with purikura you can even choose to wear costumes and different kinds of accessories in your photos.

There’s purikura photo booths for everyone in Japan – from natural and kawaii to creative and extreme. 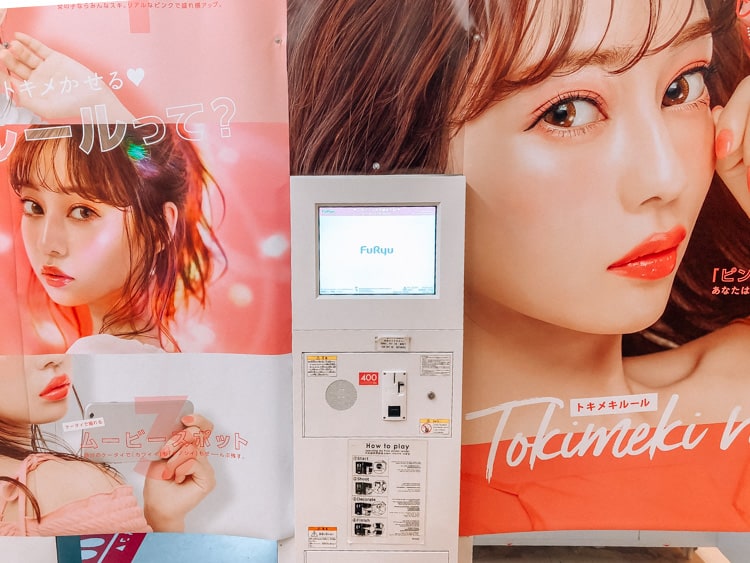 Where can find a Japanese photo booth?

You can find the purikura photo boots in every arcade in Japan. In many of the arcades there’s a whole floor of photo booths with a variety of styles to choose from.

There are also purikura shops where they only have these photo boots.

If you’re in Tokyo, one of the most popular is called Purikura no Mecca and is located in Harajuku. Alex and I have been there twice to take photos. 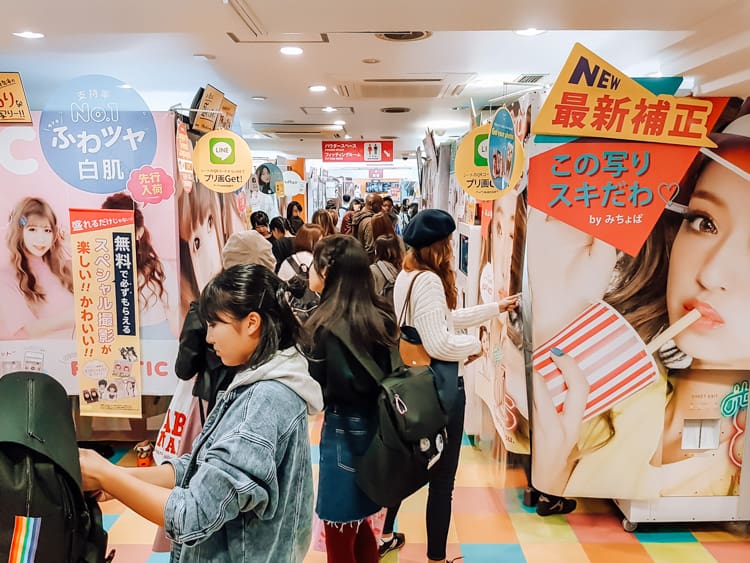 How much does it cost?

Normally, Purikura costs around 400 yen. But there are also some machines that cost less and more.

Keep your purikura photos as a souvenir

The Japanese photo booths are not only fun to use, but also great since you get a souvenir out of it. The photos you take and print out make great and memorable souvenirs to bring back home.

I just love to look at our purikura photos. They make me laugh and brings up so many good memories from our trip to Japan. 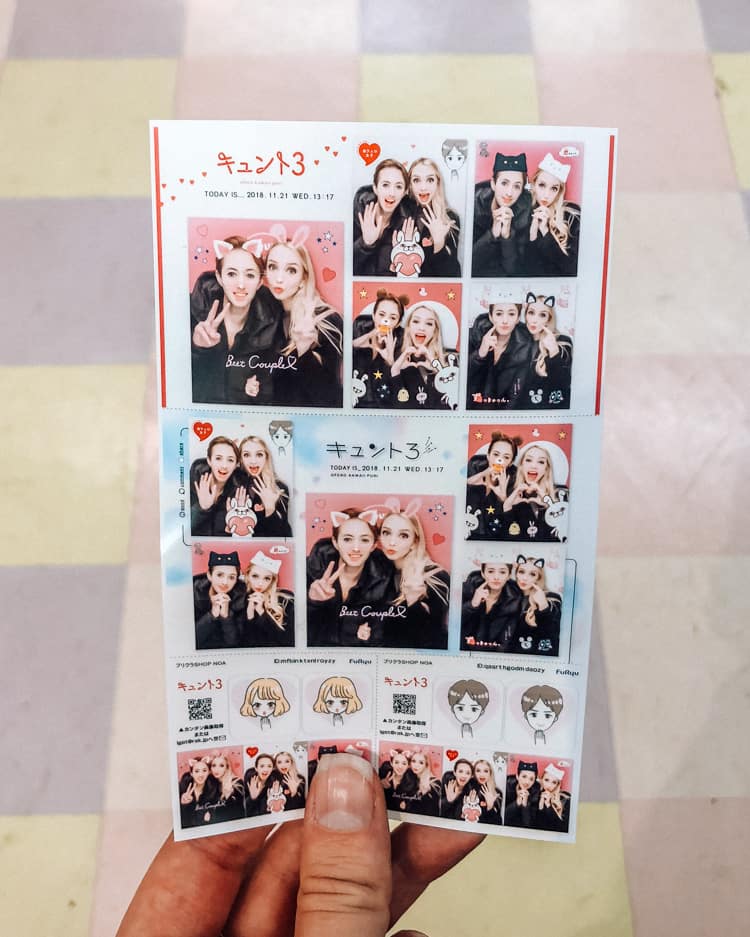 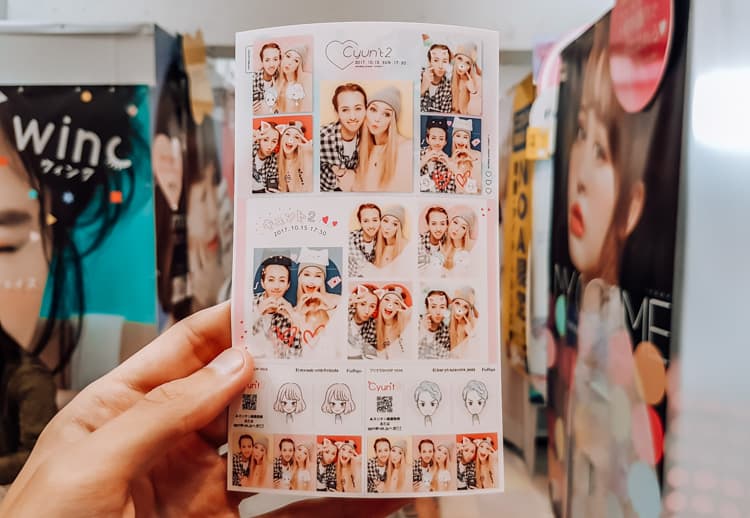 Purkura is short for Purinto Kurabu, which means “print club” in Japanese. The first Purinto Karabu machines came to Japan in 1995, and has been popular since.

These were simple machines from the beginning, where you could take a photo with different kinds of frames around it.

Short after, SEGA started to develop new machines and they came to be called purikura. They were placed in arcades and amusement centers and became very popular throughout Japan.

In 1997 the purikura trend really took off when they were featured by the popular Japanese band SMAP on TV. However, it was in the late 90s when purikura really hit its peak, and since then it’s been a big part of the Japanese culture.

A Japanese guide to Purikura

Down below you have a video of how to use the Japanese photo booths. It’s a good video that makes it a little bit easier to understand how everything works.

Is there a Purikura App?

Yes, there are several apps where you can get the same effect from using one of the purikura machines in Japan. However, it’s not as fun as the real machines.

Just search in apple store or google play after “Purikura”, and I’m sure that you’ll find some cool apps to use to edit your photos in a kawaii way.

Do you have more questions about purikura in Japan? Leave a comment below!