Rakotzbrücke: The Devil’s Bridge in Germany

Rakotzbrücke, also known as the Devil’s bridge is a bridge that looks like it’s been taken straight out of a fairytale. This little bridge is tucked away in the middle of nowhere in a small park in Saxony, Germany.

You’ve probably seen it on social media where this fairytale bridge forms a perfect circle with the reflections in the water of lake Rakotzsee.

Many people have asked me if it’s worth making the trip there. I say yes because this bridge is just too beautiful not to be seen. Down below you can read more about the bridge, how to get there, where to stay and other useful information.

Facts about the Devil’s Bridge

Rakotzbrücke is a storybook bridge that’s tucked away in the forest of Kromlauer Park in Saxony Germany. This bridge is one of the world’s most famous bridges, due to its design and age. It’s a place where people come from all over the world, just to get a glimpse of it – and of course, take hundreds of pictures.

It’s a unique bridge with an interesting history behind it, which makes it worth a visit if you’re in the area or go during the right season.

Rakotzbrücke was commissioned in 1860 by a local knight. The bridge is also known under the name Devil’s Bridge, due to that this bridge was so dangerous and miraculous that it must have been built by th Devil himself.

The legend behind the Devil’s Bridge

According to legends, the architect in charge (the local knight) had a deadline to complete the bridge. The legend says that he called on the Devil to help him finish his work, and the Devil agreed if he would deliver to him the first living being that crossed the bridge.

The Devil completed the bridge and the story goes on telling how smart the builders were and how they tricked the Devil. They tricked him by making a rooster or goat walk across the bridge instead of themselves. The Devil would resort to an angry rage and then slaughter the poor animal before leaving.

I’ve seen pictures from the Rakotzbrücke during all seasons of the year, and it all looks gorgeous. But I would say that it looks the most beautiful during autumn since the surrounding nature shifts in all different kinds of colors.

During summer it’s much more crowded and during winter there aren’t many hours of daylight, as well as it’s hard to see the reflections since the lake freezes and covers with snow. But, I’ve seen pictures from winter where it looks amazing. Just when it starts to get a little bit warmer, the snow melts and make the ice shiny with reflections of the bridge.

How to get to Rakotzbrücke

The Devil’s Bridge is located in Kromlauer Park in Saxony, Germany. There are not much around to explore except the bridge, so I would recommend visiting it on the way before driving to your next destination.

The fastest and easiest way is to drive there yourself. It’s easy to find your way there if you use a GPS or Google Maps. But if you’re not used to the roads in Germany, or simply do not have a car, you can always go there by local transport.

Take a train to Weißwasser (Oberlausitz), and then take bus 257 to Kromlau, Gablenz. From there you have to walk about 1 kilometer to the bridge. I can recommend you to download the location to your phone before traveling, since it’s not 100% sure that you’ll have WiFi connection.

Just note that the buses don’t run daily since there are just small villages around. You cannot rely on taxis either since they’re not always available that far out in the countryside.

Click here to see the schedule for trains to Weißwasser 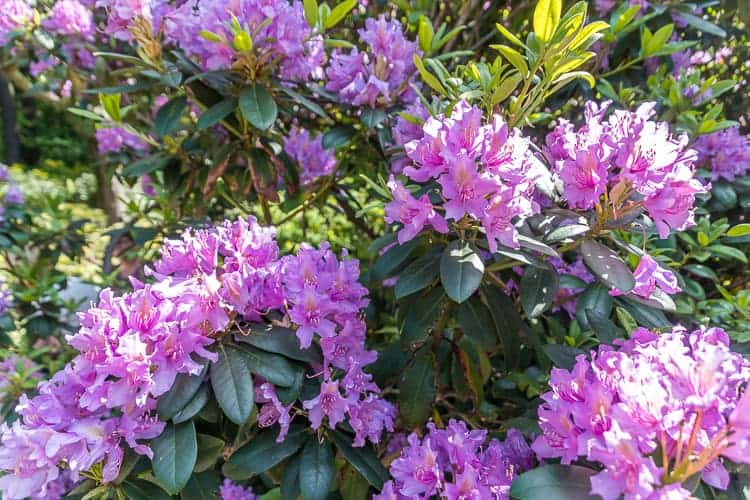 Where can I park my car?

Just a couple of minutes away from the bridge is a big parking lot where you can park your car. When we went there it was an event in the village, so they charged for parking. I’m not 100% sure how it is the rest of the year, but we only paid 2 euros for a whole day, which is not much.

So make sure to have some coins with you if you need to pay for parking.

You’ve probably seen several pictures on social media showing people who are walking or jumping on the Devil’s bridge. They’re either photoshopped, old pictures, or they’ve disrespected the rules to take their shot.

Today they have put up a fence around the entrance around the bridge, to prevent people from walking on it to protect it from falling apart.

Either way, if the pictures are photoshopped or not,  I don’t think it’s a good idea to encourage people to get the same shot, without mentioning the truth behind it.

I got quite disappointed when I got there since I also wanted to take a picture like that, but I quickly realized that it was not possible.

It was a bit disappointing since we went there to shoot some cool photos. It was really hard since there was a big fence around the whole thing.

If you’re planning to go there, it’s a good idea to check beforehand if there’s still construction going on and if it’s worth going or not.

Personally, when it’s under construction like it was when I visited, I wouldn’t recommend going only for the bridge. But if you’re in the nearby area I definitely think it’s worth it since the place is still beautiful to see. 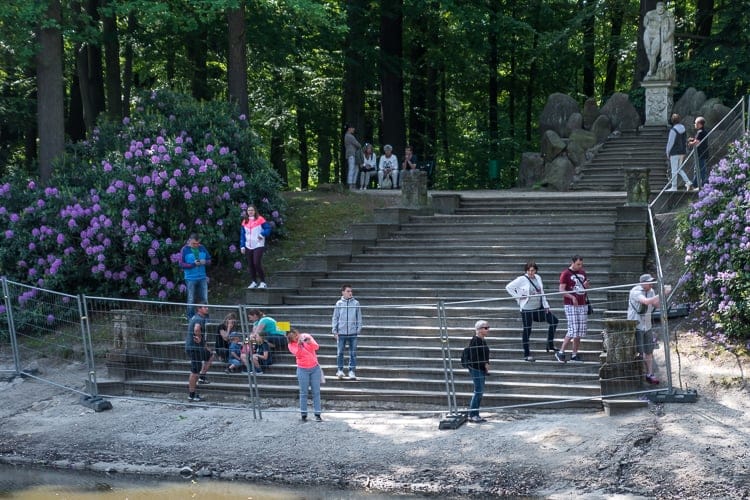 I must say that you shouldn’t go to Rakotzbrücke with too high expectations. When I went there it was construction, so we could barely take any photos. Don’t get me wrong, it was still beautiful and worth seeing, but it was not as good as we had imagined it to be.

There wasn’t as much water as we had seen in the photos, which resulted in not as good reflections.

I’ve even seen pictures on Instagram where people have arrived and there has been almost no water at all since it has dried up during warm weather. Not only that, but it could also be rainy or windy so you can’t see the reflections that well.

My point is that it’s not good to go there with too high expectations since you never know how it’s going to look. This way you won’t get disappointed :) 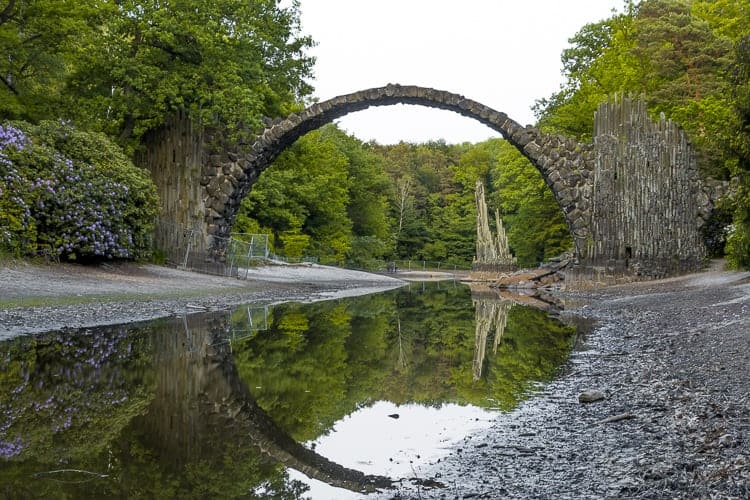 The closest cities to fly to is either Dresden, Berlin or Leipzig. From there it’s easy to rent a car and drive to the bridge.

You can also catch the train and the bus. But it’s nothing I would recommend since it takes much more time and the buses don’t depart that often from the smaller nearby villages.

Click here to find the cheapest flight tickets to Germany

We stayed in a town called Spremberg, and it was just a 30-minute drive to the bridge, which made it possible for us to go early in the morning for sunrise.

I can definitely recommend you to overnight at a hotel or guest house nearby so you don’t have to stress while visiting the bridge. And if the weather is bad the first day, you might get lucky the second day before checking out from your hotel!

Like I’ve mentioned, the best way to get to Rakotzbrücke is by car. So if you don’t live nearby and plan to go there with your own car, I would suggest booking a rental car.

It’s not so expensive and it’s much better since you don’t have to rely on the local busses.

Click here to find the best car to the best price

Down below you have a map of the Devil’s bridge. I’ve marked the exact location of the bridge so it’s easy for you to find it! 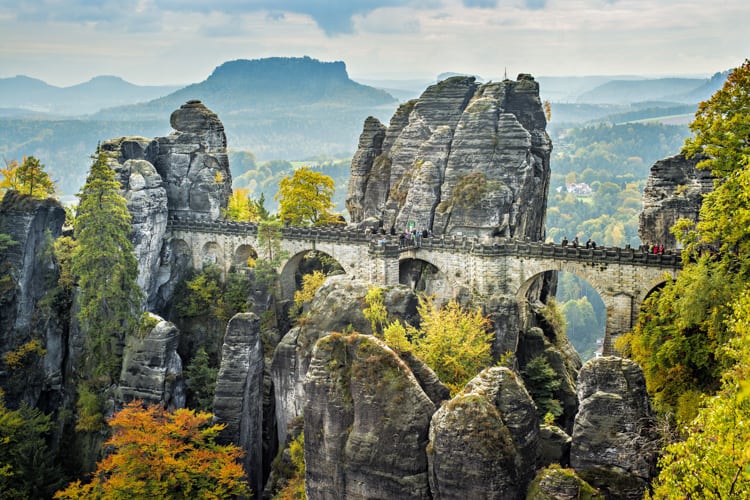 I hope you liked this guide to Rakotzbrücke, the Devil’s Bridge in Germany. If you have any further questions about this place, don’t hesitate to ask down in the comment section!