Want to know more about Russian food and cuisine? Food might not be the first thing that comes to your mind when thinking about Russia. But I can tell you that the country is full of interesting traditional dishes to try.

Russia has so much more to offer than vodka and caviar. However, those are two things that you should taste as well. Down below you can read more about Russian food and its traditional dishes:

Borscht is a soup made with beetroots, meat, and sautéed vegetables such as cabbage, onions, potatoes, and carrots. It’s originally from Ukraine, but is just as popular in Russia.

It’s served with fresh sour cream on top, and can be eaten hot or cold. 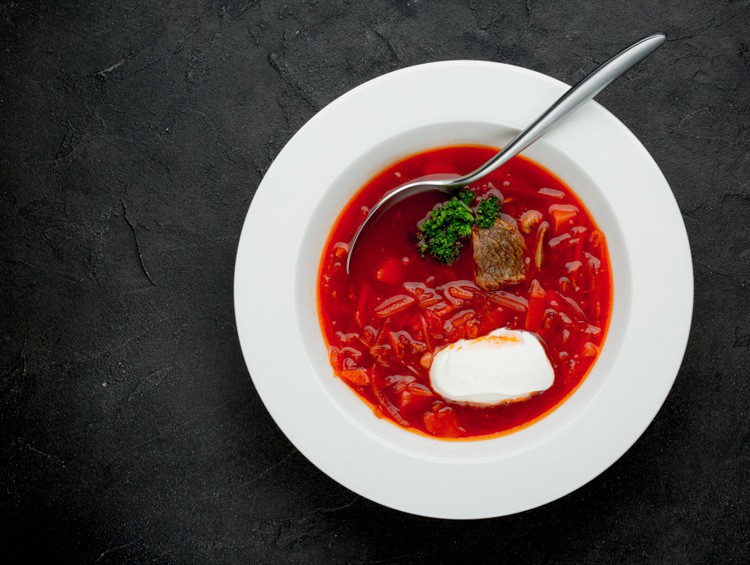 Beef Stroganoff is one of the most classic Russian dishes. It’s made of strips of beef, onions, and mushrooms sautéed in sour cream and white wine.

It’s served with rice or pasta.

This is one dish that’s popular all over the world with several variations. For example, we have a similar dish in Sweden called Korv Stroganoff which is made of sausage instead of beef. 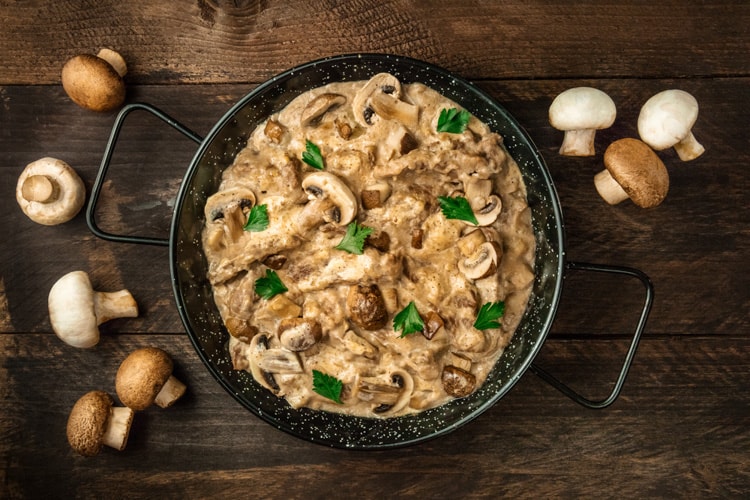 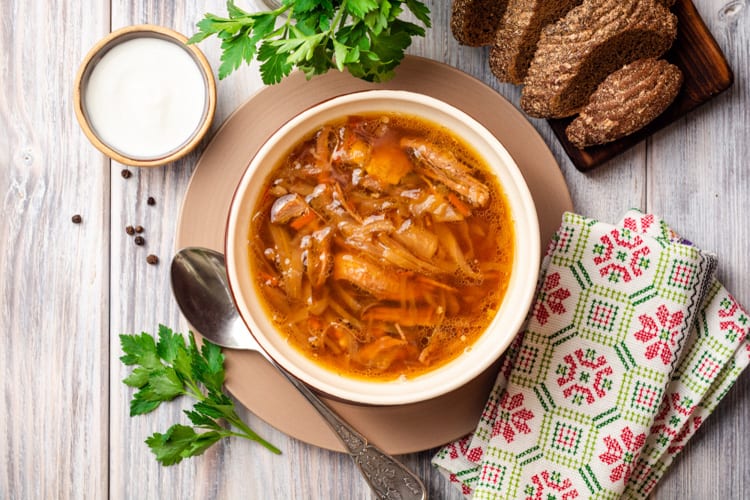 Solyanka is a thick Russian soup made with various types of meat such as bacon, ham, beef, and sausage – but can also be made with fish. Vegetables are also added to the soup, such as cabbage, carrots, onions, and potatoes.

The Solyanka soup is topped with lemon and chopped pickles, which adds to the sour flavor. 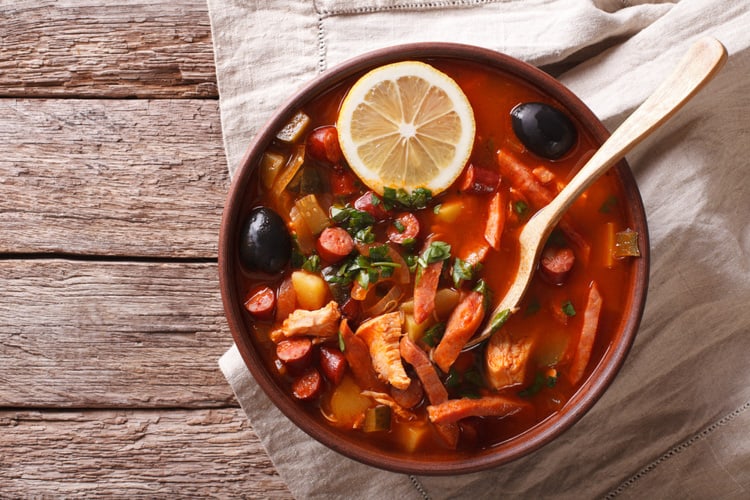 This salad is also known under the name ”Russian Salad” and was invented by the chef Lucien Oliver during the 1860s.

Back then the recipe was a bit more fancy and contained ingredients such as caviar, grouse, smoked duck, veal tongue, and a special sauce.

Today the Oliver Salad is a bit more simple with ingredients such as potatoes, carrots, eggs, pickles, peas, and with either chicken or beef.

This is a staple dish in the Russian cuisine and is especially popular during holidays like Christmas and New Year’s Eve. 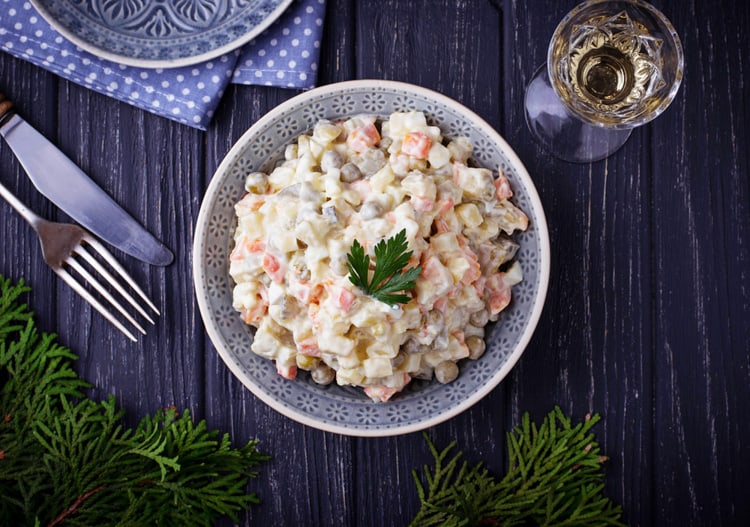 Blini are thin pancakes made from unleavened dough. They’re more or less like french crêpes, but topped with savory things instead of sweet. 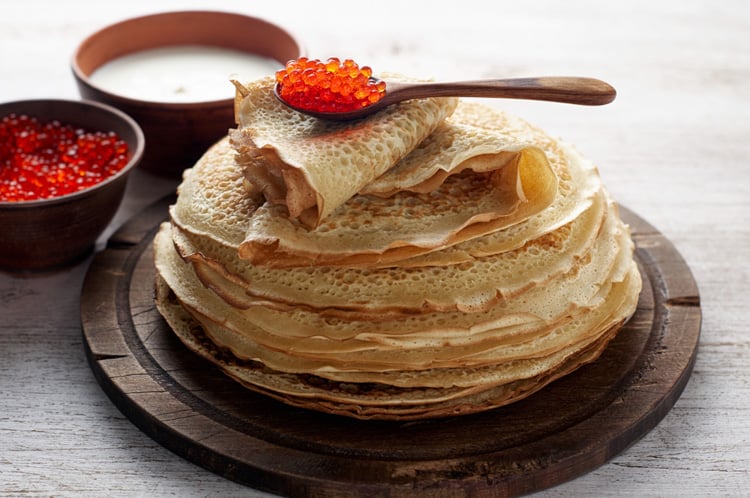 Golubtsy is one of the most popular dishes in Russia. It’s cabbage rolls stuffed with meat and rice, served with a dollop of sour cream. 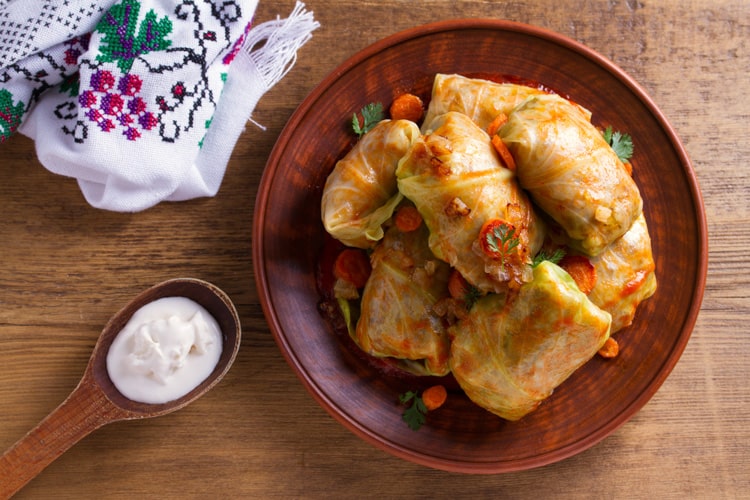 Okroshka is a cold soup that’s popular to eat during the hot summer months in Russia.

It’s traditionally cooked with kvass, but is sometimes replaced with kefir or mineral water. Meat, radish, cucumber, boiled potatoes, eggs, and meat is added to the soup. 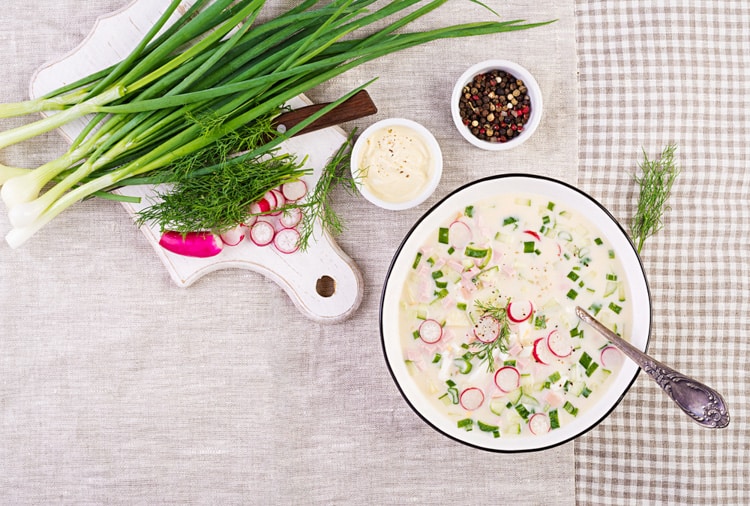 Coulibiac is a Russian pirog filled with fish or meat. The most common filling is with salmon or sturgeon, eggs, mushrooms, onions, dill, and rice or buckwheat.

This pirog can also be made vegetarian or with different kinds of meat. 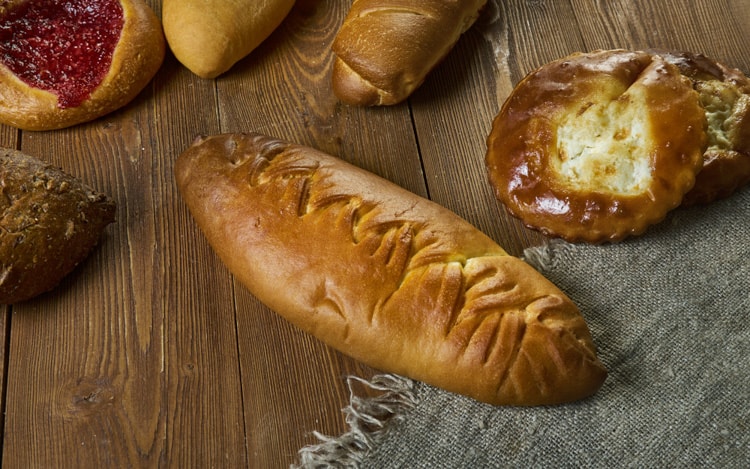 Pelmeni is the national dish of Russia and is loved by both locals and tourists. It’s dumplings made from thin pasta dough and filled with minced meat.

They can be served plain, in butter with sour cream, or in a soup.

Pelmeni is one of the dishes that you have to try when you’re in Russia. Not only because it’s their national dish, but also because it’s really good. 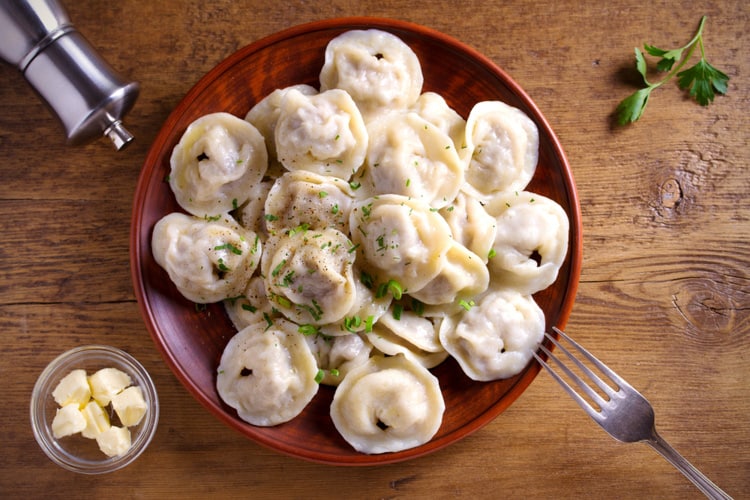 Shuba, also known as ”herring under a fur coat” is a Russian layered salad made from pickled herring, grated boiled vegetables, chopped onions, and mayonnaise. 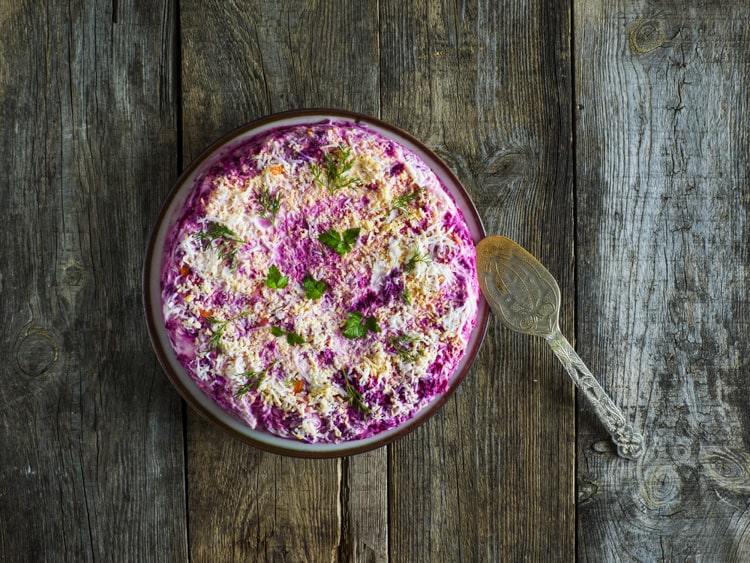 Zharkoye is a Russian stew that’s popular to make at home, but is also served in most Russian restaurants across the country. 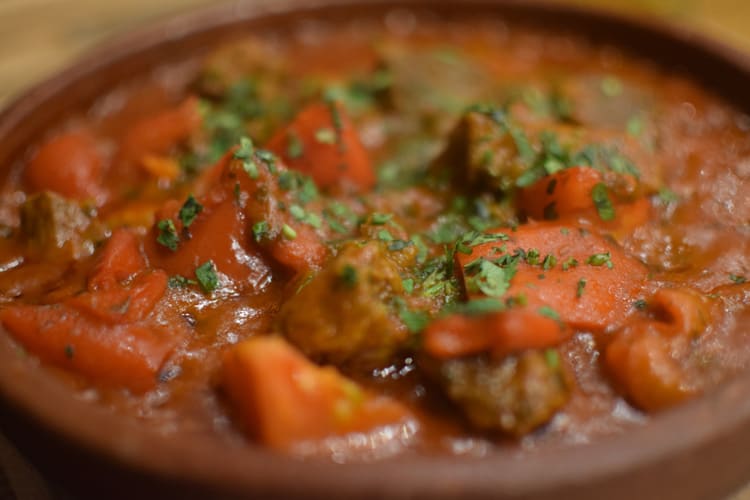 The Russian cuisine is both healthy and delicious with its naturally grown ingredients. The Russian dishes are quite filling since they use lots of vegetable oil, sour cream, and mayonnaise in their cooking.

Grains, vegetables, roots, fish, mushrooms, and berries are staples in Russian food. Potatoes might be one of the most important staples.

What’s the national dish of Russia?

Pelmeni is the national dish of Russia

What is a traditional meal in Russia?

A typical Russian dinner consists of a salad, a meat course of either chicken, pork, beef, or fish, with potatoes or pasta.

Bread is another staple in the Russian cuisine and is usually served at the dinner table. 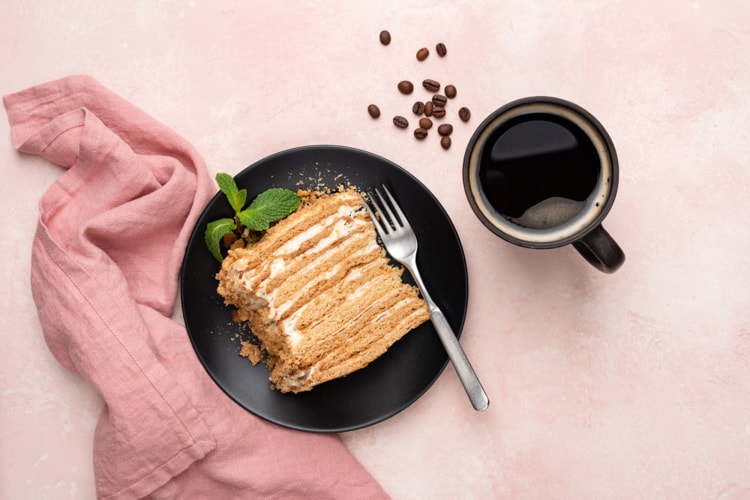 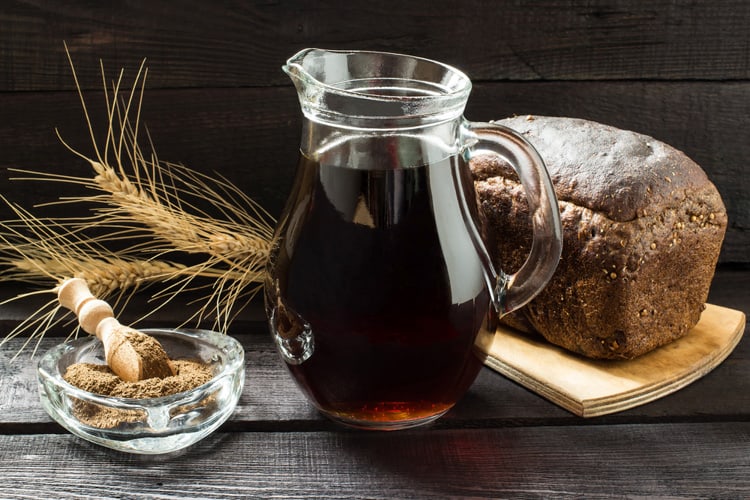 Do you have more questions about Russian food and cuisine? Leave a comment below!