Santa Maria del Fiore, also known as Duomo di Firenze, is one of the world’s most beautiful and well-known cathedrals. It’s located in the middle of Florence’s Piazza del Duomo square and is surrounded by several of the city’s major attractions, including Giotto’s Campanile and Battistero di San Giovanni.

This church is an attraction that you simply cannot miss during your stay in the city since it’s such a beautiful and majestic building. Below you can read more about Santa Maria del Fiore and useful information before you visit:

It’s free to visit the church and therefore there are often long queues, especially during high season.

If you visit early in the morning when the church opens then you might be lucky with shorter queues, but if you plan to visit in the middle of the day, I can recommend buying a ticket in advance so you can skip the lines.

The tour I’ve linked below includes priority entrance to the cathedral and a 30 minute guided tour in English where you’ll learn more about the beautiful Duomo di Firenze.

The inside of Duomo di Firenze

The biggest work of art in the cathedral is Giorgio Vasari’s frescoes in the dome, painted between 1572-1579. It was Giorgio Vasari who designed the paintings, but it was actually his student Frederico Zuccari who painted the most of them.

These paintings are very interesting, and you can learn more about them through a guided tour.

Enjoy the view from the top

In addition to strolling around inside the church and looking at the beautiful artwork, you can also go up to the top of the dome where you have a great view of the city.

Via the link below you can book a guided tour which includes a ticket to the dome, the baptistery, and the bell tower.

You can buy your tickets here

NOTE: Not everyone can go up to the dome. There is no elevator so you have to climb up 466 steep steps. The way up to the dome is also quite narrow, so it’s not for someone who easily gets claustrophobia.

Santa Maria del Fiore was designed by Arnolfo di Cambio and was the largest church in Europe when it was completed during the 15th century. The church is 153 meters long, 90 meters wide and 114.5 meters high.

The first stones were laid on September 8 in 1296 according to the design of Arnolfo di Cambio. He built the cathedral between 1296 and 1302. The cathedral we can see today looks a little bit different from Arnolfo’s design, since it was completed by two other architects; Filippo Brunelleschi and Emilio De Fabris.

You can see different architectural styles in the church, which shows how the tastes have changed throughout history – from the foundation to the finished cathedral.

Interesting facts about the cathedral

In addition to the church and the dome, the bell tower of Giotto’s Campanile is another attraction that you should visit.

This 15 meter wide and 84.7 meter high tower began to be built in 1334 by Giotto. It’s a prime example of 13th-century Gothic architecture, clad in white, red and green marble – just like the cathedral.

Giotto died in 1337 and had only completed the first part of the tower, which was then finished by Andrea Pisano and later Francesco Talenti.

It’s an impressive building that you can visit to have a look at the beautiful architecture and enjoy the view from the top of the bell tower. 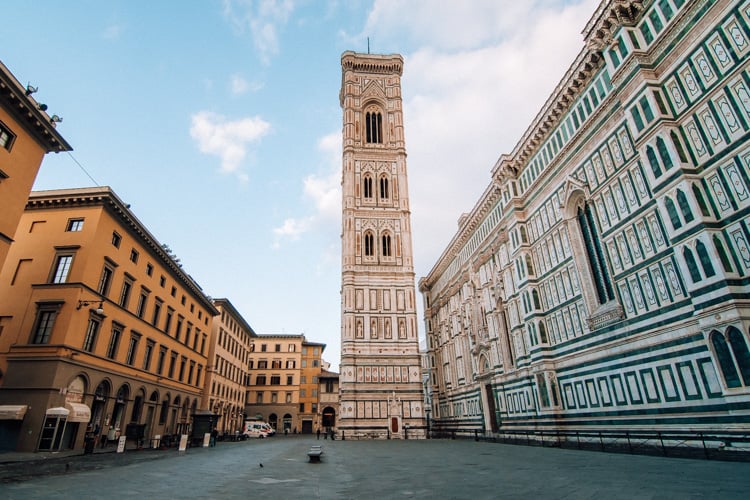 Another attraction not to be missed is Battistero di San Giovanni. This baptistery is one of the oldest buildings in Florence and is located opposite of the entrance of Santa Maria del Fiore.

The building is believed to date back to 400- or 500 AD, and has been rebuilt several times throughout history. Between the years of 1059 and 1128, the building was given a Florentine Romanesque style and during the 13th century they added to the mosaic inside the baptistery.

In addition to the beautiful mosaic, the three bronze doors are also something you should have a closer look at. There is the south door, the north door, and last but not least the eastern door which Michelangelo called “the gates of paradise”.

Do you have more questions about Santa Maria del Fiore in Florence? Leave a comment below!