Want to know more about Slovenian food and cuisine? Slovenia is famous for its beautiful nature, wine, and churches, but what about the local food?

This country might not be famous for its cuisine, but it sure deserves more attention. From Slovenian-style ravioli and local soups to sausages and dried ham – there are so many delicious dishes to taste in Slovenia.

Here are 12 traditional dishes from Slovenia that you can eat for a local experience:

Kranjska Klobasa, also known as the Carniolan sausage, is one of the most famous Slovenian foods.

This sausage originated in the Gorenjska region and is today eaten all across the country.

In Ljubljana it’s considered to be an important part of the menu, and is often eaten during celebrations and other important events. 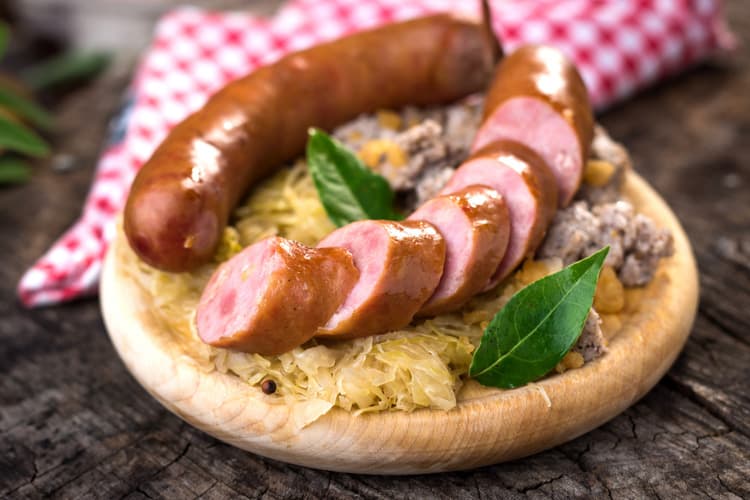 Kraški Pršut, also known as Karst Prosciutto, is another food from Slovenia that you have to add to your food bucket list. It’s a product of old traditions of salting and drying meat on the Karst bora.

Taste the Karst prosciutto together with a glass of Teran or red Karst for the best food experience! 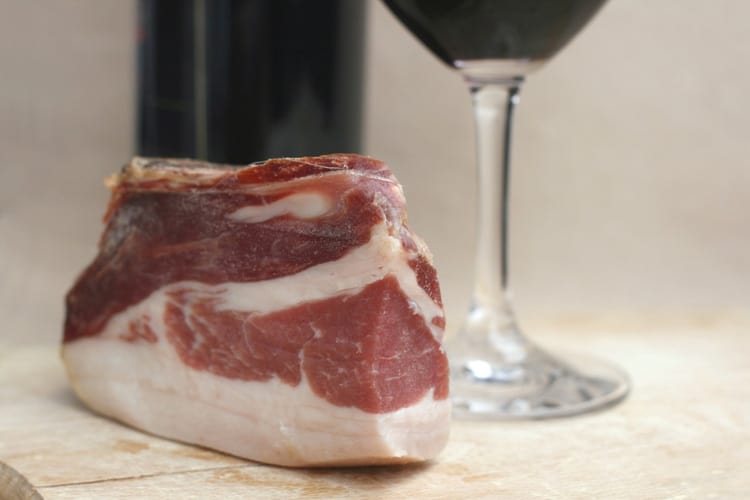 This is a simple Slovenian food made of either buckwheat flour, maize, wheat, or a combination of wheat and potato flour. Water, cooking oil, and salt is added and cooked for about 15 minutes.

Žganci can be served with milk, honey, lard, and cracklings, or with runny yogurt. A savory version of Žganci is served with meat as part of a main dish. It’s considered to be a typical Slovenian food for farmers.

Jota is a Slovenian soup made with sauerkraut (or with sour turnip, beetroot leaves, and fresh cabbage), kidney beans, potatoes, flour, dripping, pepper, and garlic.

It has a thick consistency and is popular to eat during the cold winter months in Slovenia. 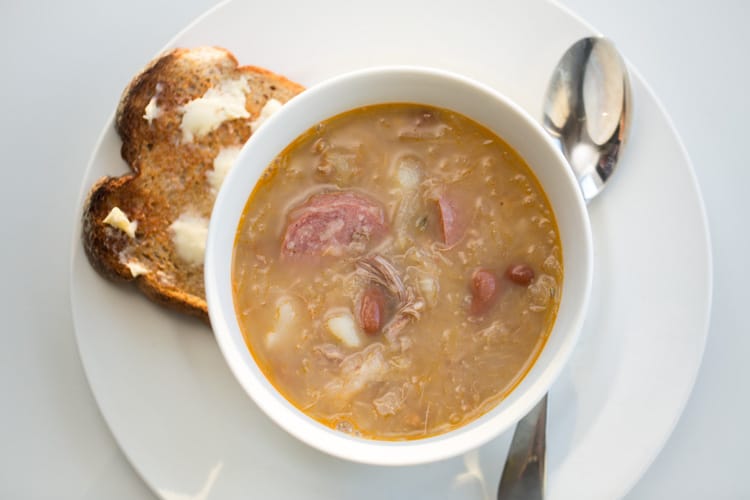 It’s a classic food in the Slovenian households because it’s so simple to make. Štefani Pečenka is especially poplar during holidays such as Easter.

Štruklji is one popular dish among both locals and tourists. It’s made of dough filled with different kinds of fillings – from savory to sweet. It can be eaten as a main dish, side dish, or as an appetizer.

The most common version of Štruklji is filled with cottage cheese, tarragon, walnuts, apple, or poppy seeds.

When it comes to food in Slovenia, this is one of the dishes you have to taste!

Matevž is one of the national dishes of Slovenia and comes from the Kočevsko region. It’s made of beans and potatoes that are mixed together.

It’s mostly served as a side dish, but is also common to eat as a main dish with sauerkraut and turnips.

Močnik is an old traditional Slovenian food that originates from the Dolenjska kitchen.

It’s a type of porridge made with cereals such as buckwheat, corn, wheat, millet, rye or oats. The cereal is then cooked in milk, cream, or sour cream.

The Slovenian food Žlikrofi is a must to taste while you’re in the country. It’s Slovenian-style ravioli made from a a dough with a potato filling.

It’s often served as a side dish to a meat dish, but can also be served as a complete main dish.

This dish dates back to the 19th century and is one of the most popular foods in Slovenia.

When it comes to food from Slovenia, you simply have to taste Ričet. Ričet is a traditional soup made from pot barley, beans, potatoes, carrots, parsley, celery, leeks, tomatoes onions, and garlic.

It’s similar to risotto, and is served with cured pork.

Prežganka is a national soup food from Slovenia made of flour, caraway seeds, and beaten eggs. Breadcrumbs can also be used instead of flour.

It comes originally from the Upper Carniola Region.

Bograc originally comes from the Hungarian cuisine, but is just as popular in Slovenia.

It’s a stew made from meat, potatoes, pork fat, peppers, different kinds of spices, and wine. There are several versions of this dish, but the most common ones have wild boar, beef, pork, and venison meat.

The ingredients are slowly cooked on an open fire until the meat is tender. It’s traditionally eaten during the cold winter months in Slovenia, since it’s such a warming dish. 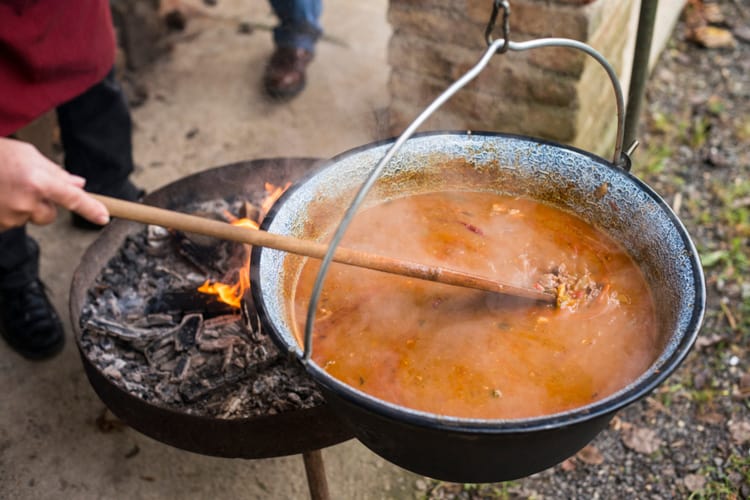 In Slovenian food they often use ingredients such as; pork, poultry, potatoes, vegetables, mushrooms, and dairy. Dandelion is a popular salad ingredient in Slovenia – it have been picked for centuries.

Soups and stews are popular to make in Slovenia, even though soup is a relatively recent invention in the Slovenian cuisine. Today there are more than 100 different soup dishes.

The food in Slovenia is often simple and hearty. 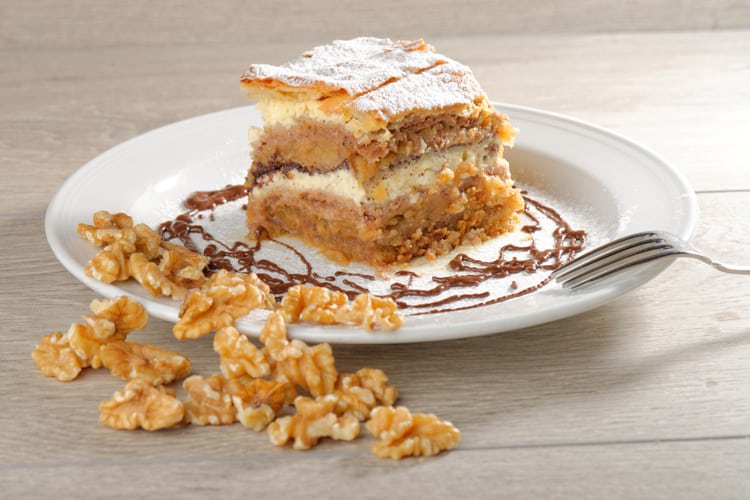 The Slovenian Christmas food varies from region to region, but some common dishes are:

Potica, is the most popular sweet to eat during Christmas. I’s a rolled-up cake with various fillings. 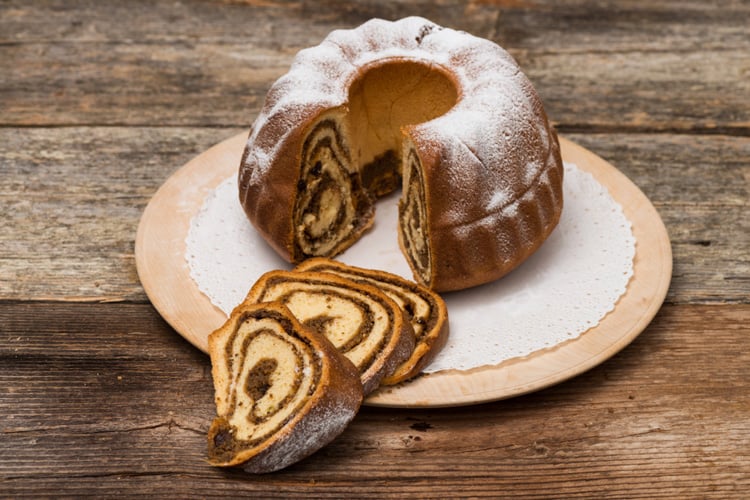 Do you have more questions about Slovenian food and cuisine? Leave a comment below!