12 Swedish Desserts and Cakes to Taste

Want to taste some Swedish desserts during your next trip to Sweden? There’s no secret that Swedish people have a sweet tooth. We have a special place in our hearts for both sweets, candy, and desserts.

Sweden isn’t internationally recognized for the Swedish food and desserts. However, it surely deserves more attention. If you ever wonder what you should order when having a Swedish fika, then continue reading below because here’s an insiders guide to the best Swedish desserts:

Prinsesstårta is one of the most famous Swedish desserts and is usually eaten on birthdays. This is a classic cake in Sweden and is made of layers of sponge cake, cream, fruit filling, and covered by a layer of marzipan.

On top of the cake is a marzipan rose for decoration. A fun fact is that it’s a tradition in Sweden that the birthday kid gets to eat the rose.

The apple cake is another classic when it comes to Swedish desserts. It’s made of dough, sugar, and apples, and is served with a creamy vanilla sauce.

You can buy this cake at various cafés all year round. It’s one of the most classic desserts in Sweden!

Belgium is probably the most famous country when it comes to waffles. But I got to tell you that the waffles we have in Sweden are even more delicious.

In Sweden they’re much thinner, crispier, and prettier – they have the shape of hearts.

You normally eat your waffles together with jam and whipped cream. Strawberry jam, raspberry jam, cloudberry jam, or “queens jam” (blueberry and raspberry) is some of the most popular jams to have on Swedish waffles.

This dessert has its own day in Sweden, known as våffeldagen (the waffle day). During that day almost every Swede makes waffles at home.

We swedes do not only eat pancakes for dessert, but also for breakfast, lunch, and dinner.

In Sweden, the pancakes are thin and usually served with some whipped cream and jam. For dessert, many people like to eat their pancakes together with ice cream as well or make a pancake cake out of it.

I might be a bit weird, but I like to have freshly squeezed lemon and sugar on my pancakes. It’s a perfect combination of the sweet and sour. 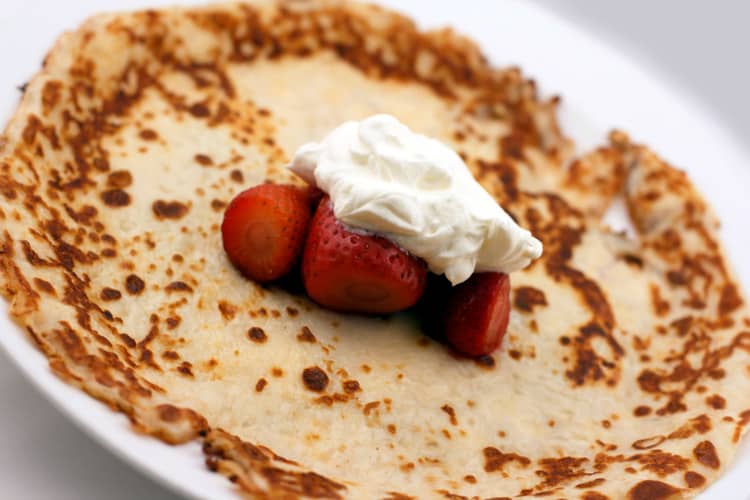 Since 1953, the daim cake has been a big favorite in the country. This milk chocolate covered cake consists of an almond base with golden cream and crunchy almond caramel.

This is one of the Swedish desserts that you can buy frozen, and can be found at most supermarkets in Sweden.

This is not one of my favorite Swedish desserts, however, it’s still one of the most popular among Swedes.

The Swedish cheesecake is nothing like the American cheesecake. The Swedish version has a unique texture and flavor and is best enjoyed with some whipped cream, jam, and fresh fruits. 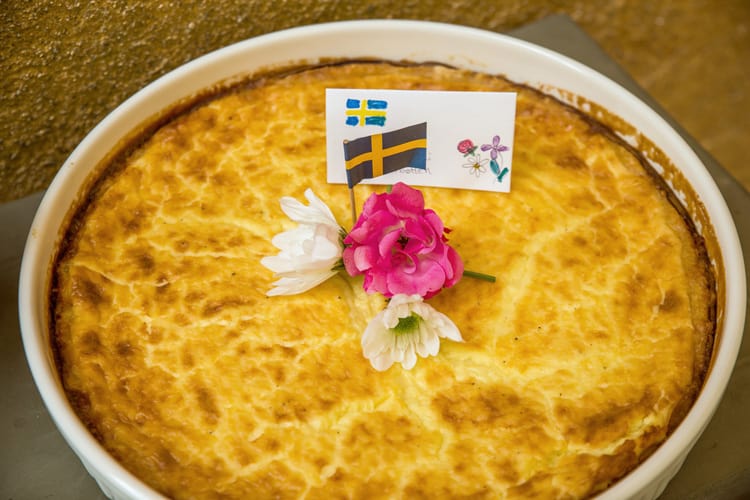 Ok. This dessert is probably one of the most delicious desserts in the world – and I don’t just say that because I’m Swedish.

It’s the texture and the chocolate flavor that makes this cake so good. Paired with some whipped cream, this sticky cake is pure perfection.

If you’re going to visit Sweden, you have to add this cake to your Swedish food bucket list. It’s heavenly good. 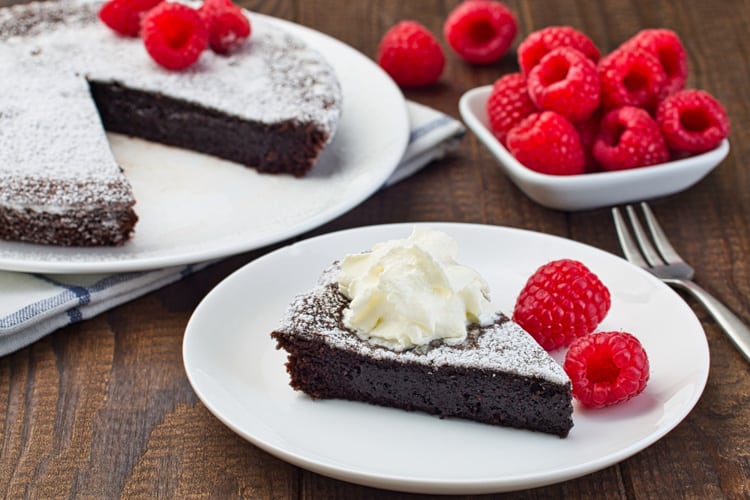 During summer, Swedes love to pick (or buy) wild berries and make pies. In Sweden, we love both raspberry pies, cloudberry pies, blueberry pies, rhubarb pies, and also pies with a mix of different kinds of berries.

The Swedish summer berry pie is best enjoyed together with some vanilla sauce. It’s a classic Swedish dessert to eat during summer. 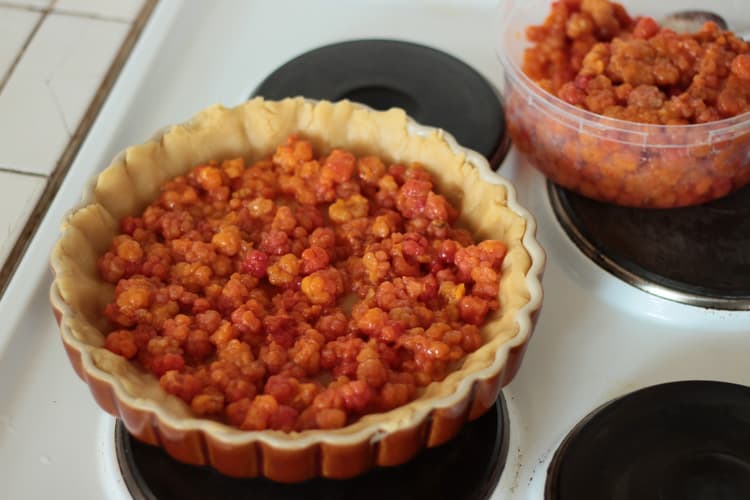 This cake is a midsummer classic, and also one of the most delicious Swedish desserts. It’s a cake filled with fresh strawberries, custard, cream, and more strawberries on the top.

If you ever visit Sweden during summer, you have to eat this cake. It’s a traditional summer cake to eat in my country. 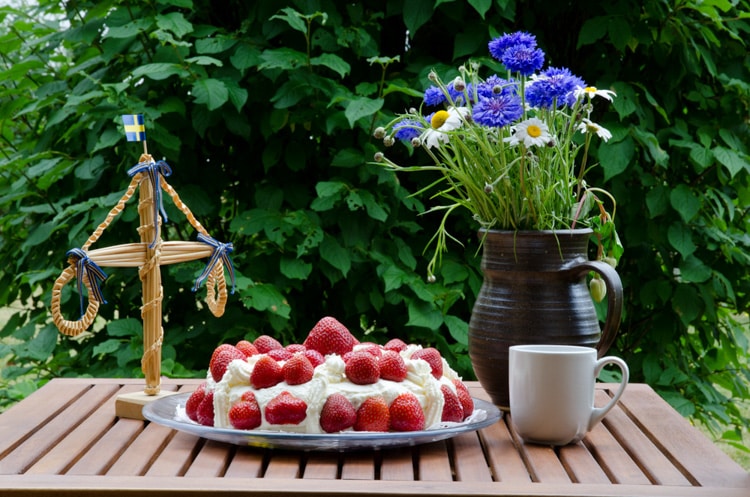 This Swedish dessert is so popular that it has its own day in Sweden, known as “fettisdagen”.

It’s a cardamom flavored bun filled with almond paste and whipped cream with some powdered sugar on top. The combination of ingredients is simply delicious, especially if you like whipped cream.

To enjoy this delicious bun you have to visit Sweden in February since that’s the month we traditionally eat it. However, it’s possible to find it at a few bakeries all year round – but it’s not an easy task! 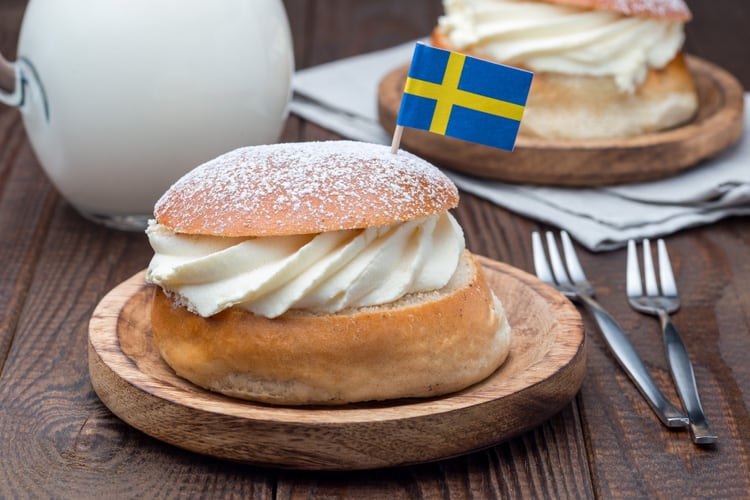 This is probably one of the most famous desserts in Sweden. The kanelbulle, also known as cinnamon bun, has become very popular around the world. I’ve even seen it in the US with an American twist to it (glazing on top).

In my opinion, there’s no other place in the world where you can eat as delicious cinnamon buns as in Sweden. It’s the ingredients we use and the way to prepare them that makes them so special.

In addition to the cinnamon buns, you also have to taste the cardamom buns. They are just as good, if not even more delicious. 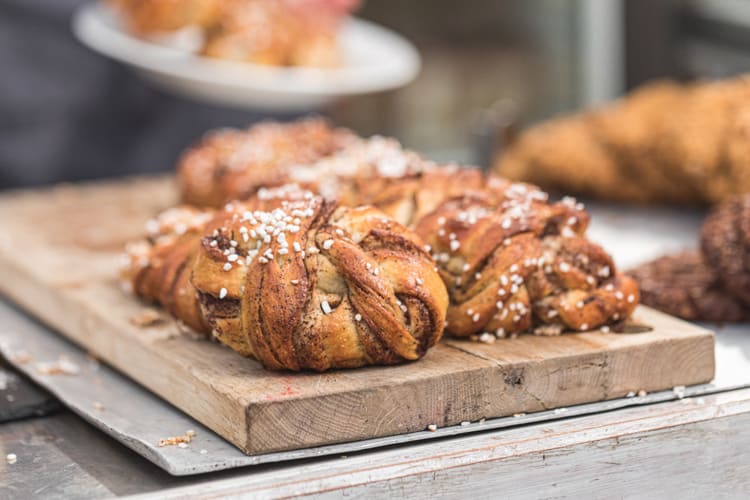 Lussebullar is one of the most delicious things to eat during Christmas in Sweden. These buns are soft, fresh, and a little sweet with the flavor of saffron.

Some are baked with raisins in the dough and some only have a few raisins on top. There are also some saffron buns baked with almond paste and topped with pearl sugar.

Desserts and sweets are a big part of the Swedish culture. We sure all have a sweet tooth, and that’s something you’ll notice when visiting our cafés and supermarkets. In Sweden, we even have specialized candy stores where you can choose between over 100 different pick and mix candies.

Many desserts in Sweden usually use local ingredients such as flour, eggs, oats, dairy products, wild berries, local fruits, and spices such as cinnamon and cardamom.

If you have tasted most of the Swedish desserts mentioned above, you’ve got some more inspiration below. 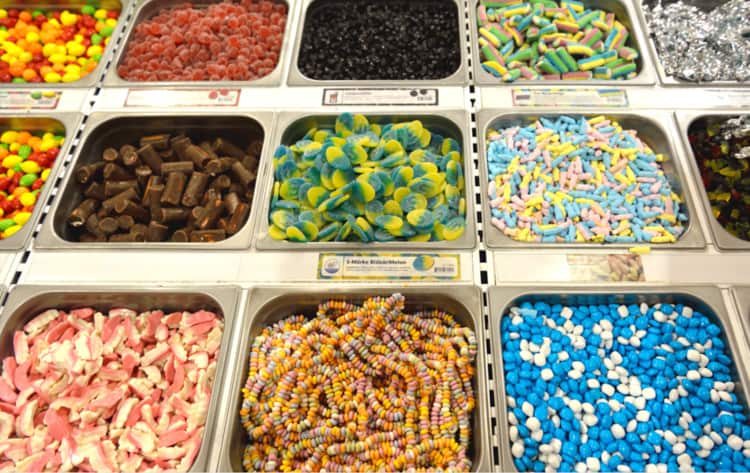 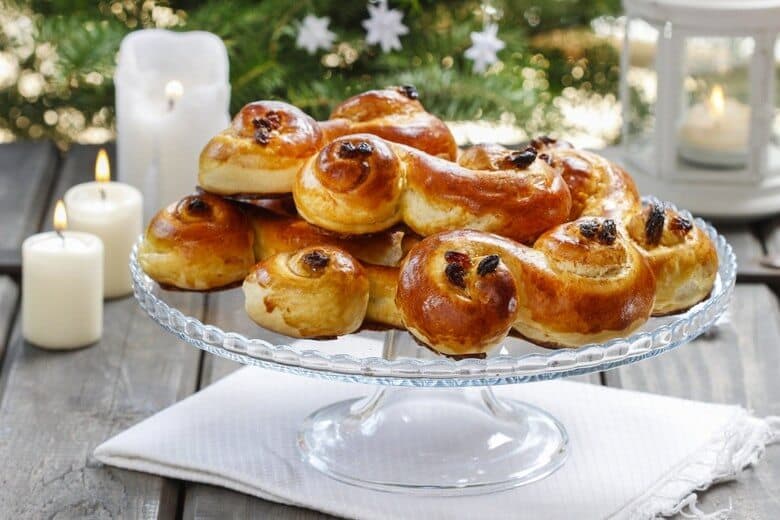 Do you have more questions about Swedish desserts? Leave a comment below!