11 Thai Desserts and Cakes to Taste

Want to taste some Thai desserts during your next trip to Thailand? Thailand is a country that has a lot to offer when it comes to sweets and desserts. There are so many delicious things to taste, and interesting new flavors to discover.

Here are 11 delicious Thai desserts to taste in Thailand:

Tub Tim Krob is a coconut milk based dessert that’s loved among the locals. It’s made of small pieces of chestnut covered in tapioca flour served with some shaved ice and sweet coconut milk.

Shredded jackfruit and coconut flesh can also be added to this dessert at some restaurants.

This was one of the Thai desserts that I got to make myself when learning to make Thai food at a cooking class in Bangkok. 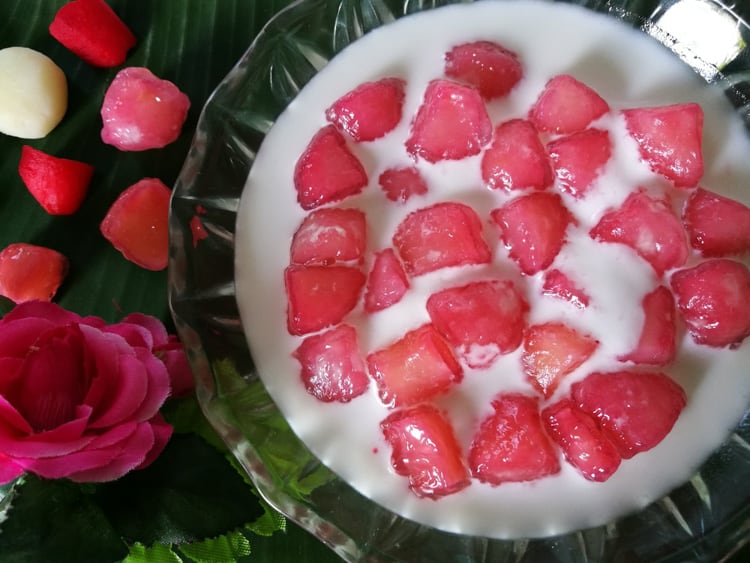 Kanom bualoy is a Thai dessert made from glutinous rice flour, coconut milk and sugar. It’s a delicious sweet soup dessert that’s a must to taste while you’re in Thailand.

It’s definitely one of the most unique Thai desserts. 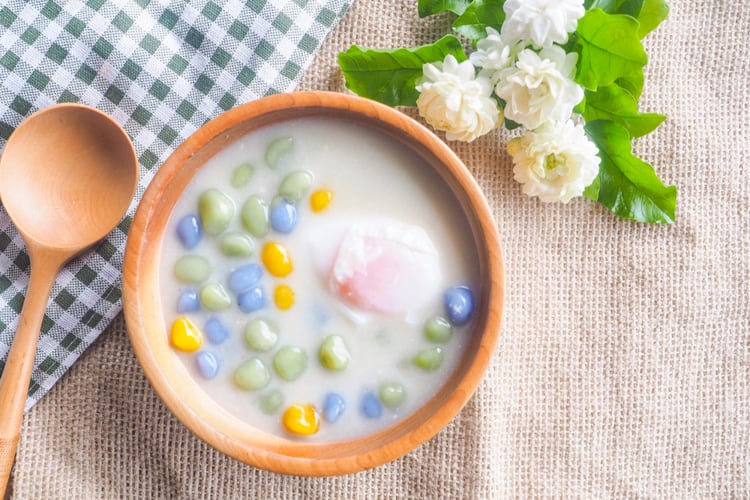 This Thai dessert is made of tapioca and rice flour mixed with coconut milk and sugar. They are formed and colored into small morsels and sprinkled with some shredded coconut.

It’s simply delicious, and a must to taste when it comes to desserts in Thailand. 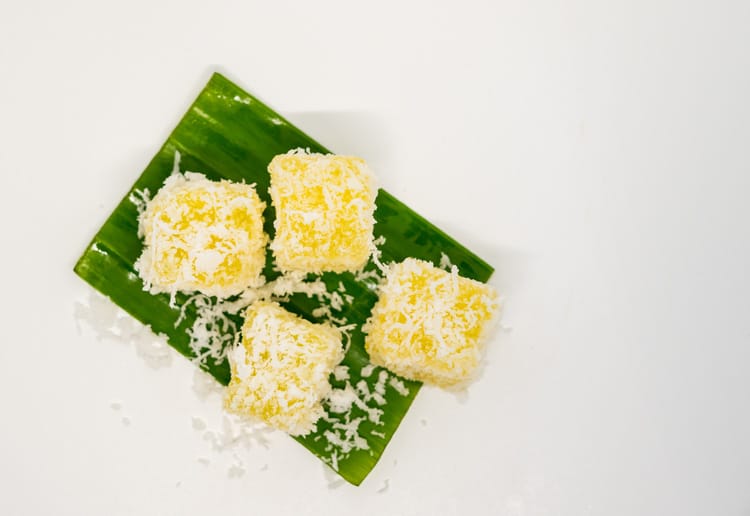 While wandering around the streets of Thailand you’ll most likely see a couple of roti food stalls. It’s a classic in Thailand, and is very popular among both tourists and locals.

It’s made of a thick dough that’s fried in oil and topped with various sweet toppings. Nutella, chocolate and bananas are the most common to eat with this fried dough.

This is no doubt one of my favorite Thai desserts. It’s a simple but heavenly good combination! 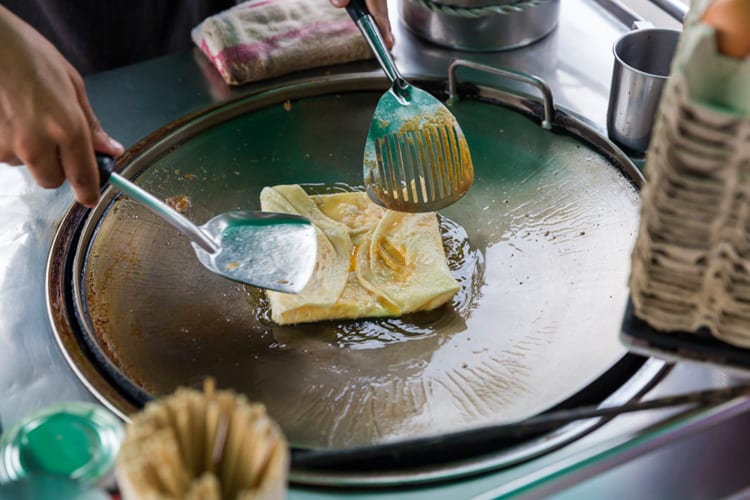 Mango sticky rice is one of the most classic Thai desserts and is loved by both the locals and tourists.

It’s made of hot sticky rice and sliced fresh mango. A thick coconut milk sauce is then poured over the mango and rice, which is a perfect combination with an interesting flavor.

Since this is one of the most popular desserts in the country, make sure to add this sweet dish to your bucket list of Thai desserts.

This is a popular street food in Thailand and is made of a crispy pancake filled with coconut cream and various toppings – from sweet to salty.

Shredded coconut, foi thong (strips of fried eggs or egg yolks) or chopped scallions are common toppings to have on Khanom Thungtag. 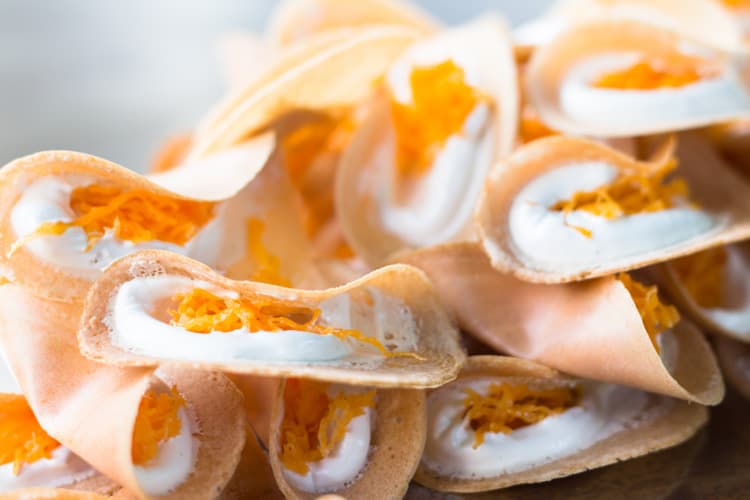 This is one of the most unique Thai desserts that you can eat in Thailand. It’s a cake made with of rice, tapioca, and arrowroot flour, mixed with coconut milk, salt, and sugar.

It’s then steamed into several layers, traditionally nine, which gives the cake its beautiful look. Khanom chan has a silky texture and is perfectly paired with a cup of local tea. 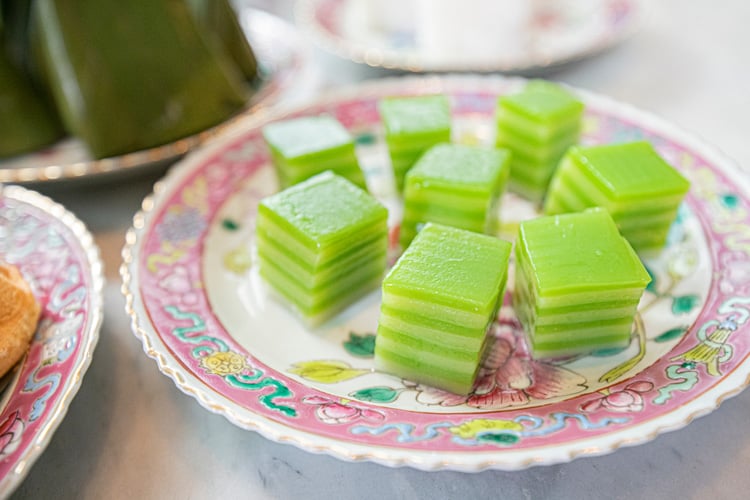 This is a sweet noodle dish made from pandan noodles in sweet coconut milk. The noodles are made from rice, arrowroot, and tapioca flour mixed with pandan juice and red lime water.

It’s served in a bowl and topped with sweet coconut milk and some crushed ice. 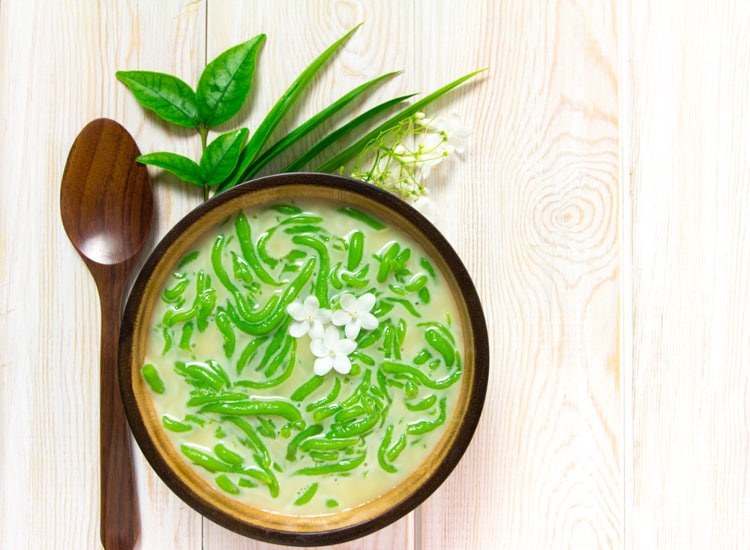 Kha Nom Tom is one of the oldest Thai desserts and is traditionally eaten during auspicious ceremonies. It’s made of glutinous rice flour, grated coconut, pandanus juice, salt, and brown sugar.

These coconut balls have a sweet taste and smell, and a soft, smooth and slightly sticky texture. 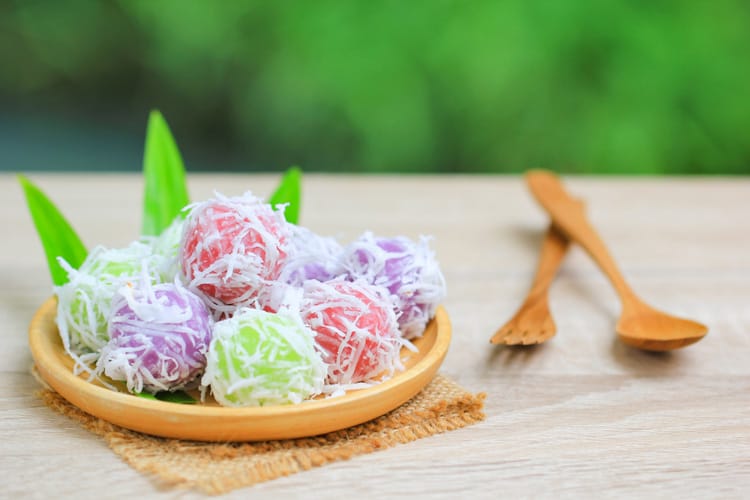 Khao Lam is made of sticky rice that’s stamed in bamboo tubes.

The simplest version of this Thai dessert is made of rice mixed with salt and water. However, today there various recipes also including grated coconut, coconut milk, sugar, and red beans.

When it comes to Thai desserts, it’s a must to taste Khao Lam. 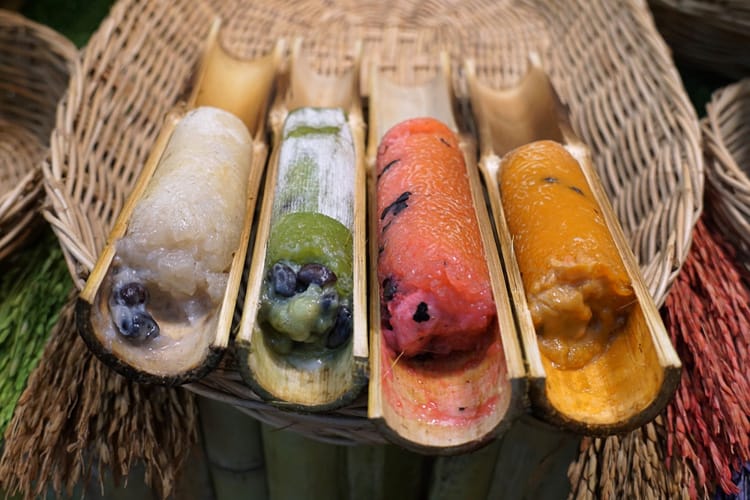 On a hot summers day in Thailand it can be nice to cool down with some coconut ice cream. It’s a classic Thai dessert that’s just as popular among the locals as the tourists.

It’s often served in a coconut with various toppings of your choice. Peanuts and sweet syrups are common toppings for this dessert. This is no doubt one of my favorite desserts in Thailand. 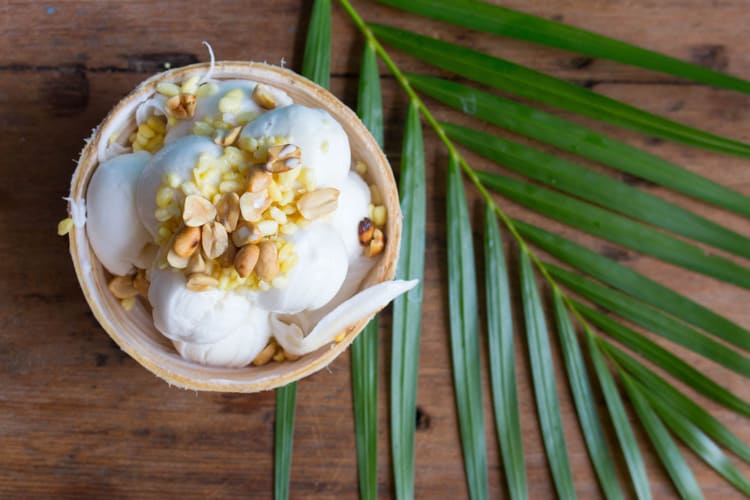 Thailand is a country that’s known for its sweet delicious desserts. Some of the main ingredients in Thai desserts include coconut cream, custard, various local fruits, sweet sticky rice, pandan, and shredded coconut.

Desserts are known as ”khanom” in Thailand, which refers to snacks or desserts in the Thai language – usually sweet food made from flour. 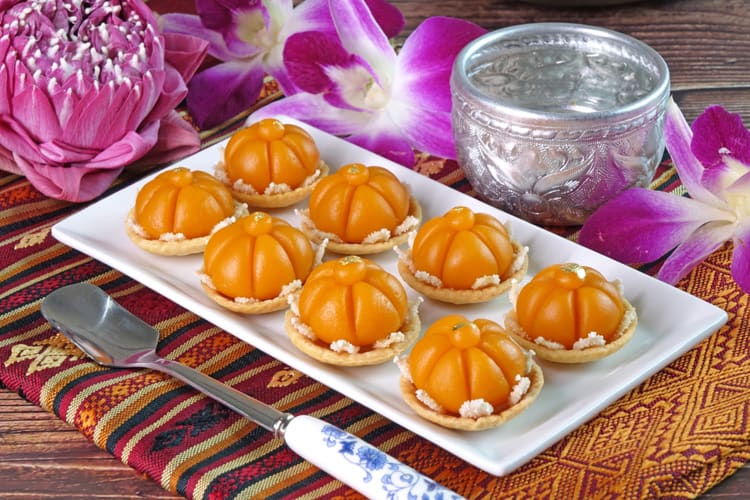 What’s your favorite among these Thai desserts? Leave a comment below!