Top 21 Things to Do in Hiroshima

Looking for things to do in Hiroshima? In this article, you can read about my best tips on Hiroshima activities that will ensure you to get a fun and memorable trip.

Hiroshima is a beautiful city in Japan that has much to offer its visitors. Here you can enjoy the beautiful nature, visit historical sites, museums, and eat delicious food. You can also visit memorial places that have a connection to the tragic event of the atomic bombing in 1945.

This is a city that will not only touch your heart but that will also leave you with fun memories from all its wonderful and cool places.

Here’s the list of the top 21 things to do in Hiroshima:

Something most people think about when thinking of Hiroshima is the tragic event that took place in 1945. The 6th of August 1945 the first atomic bomb in history was dropped in Hiroshima, which killed between 90.000 and 146.000 people.

The Atomic Bomb Dome is an architectural building that was used as an Industrial Promotion Hall before the bomb attack – the building was destroyed and the people inside killed by the bomb attack. However, the Industrial Promotion Hall wasn’t completely damaged and the remains are still standing today as a reminder of the tragic event. Today the Atomic Bomb Dome is a World Heritage Site by UNESCO and is one of the most popular attractions in Hiroshima.

Every year on the 6th of August, 8.15 am, people come from all over the world to have a minute of silence and pray for the victims of the attack. It’s a beautiful event that shouldn’t be missed if you’re in Hiroshima during this event. 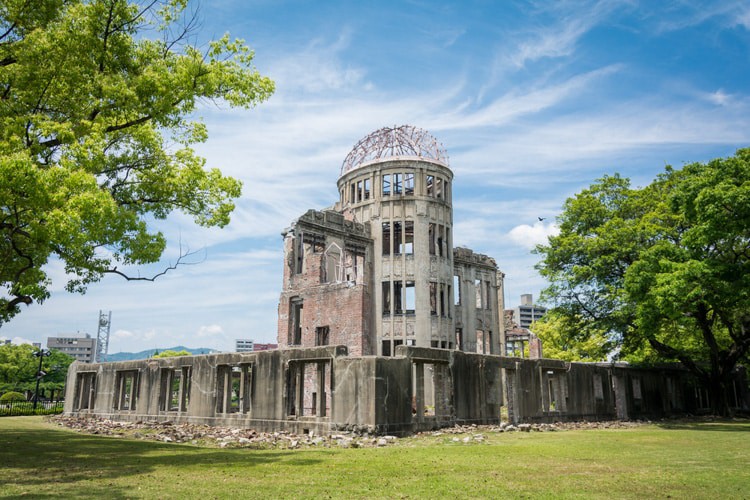 I recommend this tour where you get to learn about the tea culture in Japan as well as getting the experience of wearing a traditional kimono and learn Japanese calligraphy.

Hiroshima Peace Memorial Park was built in honor of the victims of the atomic bomb attack during the second world war. This park is located on the opposite side of the river from the Atomic Bomb Dome.

Here you can view several monuments that are dedicated to the victims. The monument that you can see in the center of the park is shaped like a house to protect the souls of the victims from rain and wind. When you look at this monument from the front, you can see the Atomic Bomb Dome under the roof of the house-shaped monument.

It’s a beautiful park that you have to visit during your stay in Hiroshima! 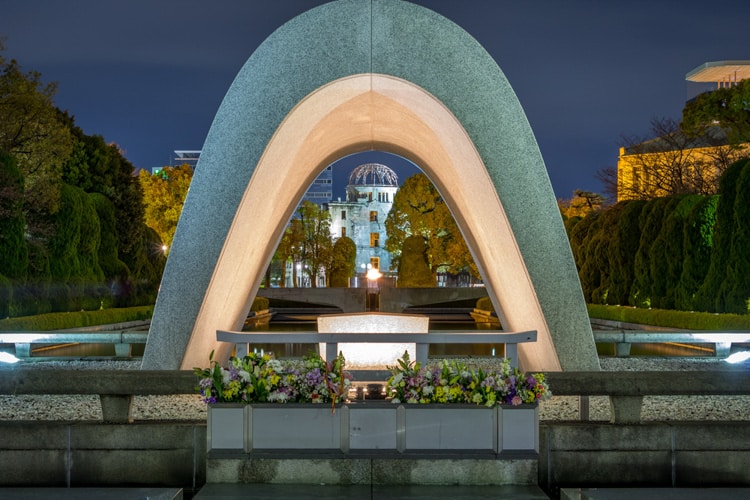 Hiroshima National Peace Memorial Hall opened its doors in 2002 and is a place where people can mourn the victims of the atomic bombing. This place contains thousands of written and video testimonies of the survivors telling about the tragic event.

This is one of those places in Hiroshima that will touch your heart when hearing about these horror stories from people who were affected by the atomic bombing in 1945.

5. Hiroshima Castle – One of the most popular things to do in Hiroshima

The famous Hiroshima Castle was built in 1590, and after being destroyed by the atomic bomb in 1945, it was restored and rebuilt into what you can see today. It’s located inside a beautiful garden surrounded by a moat and beautiful views of the city.

You can go inside the castle for a small fee (¥370), which is highly recommended. Inside you can enjoy the beautiful architecture and learn more about the history of the castle. When we went inside the Hiroshima castle we also got to experience to wear some old traditional clothing, which was pretty cool.

This is also one of the best spots in the city to see cherry blossom in spring. 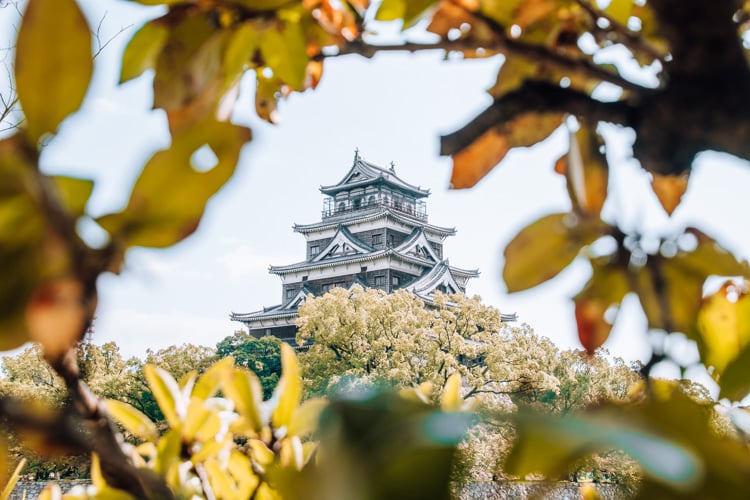 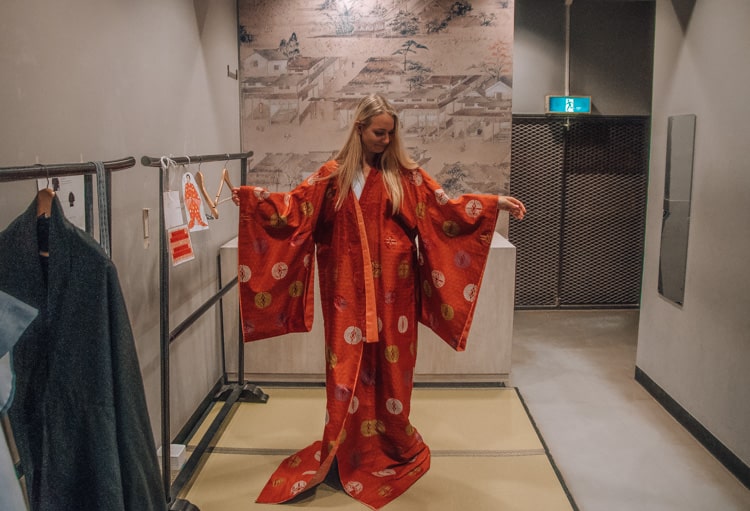 In the heart of the city, you’ll find one of the most popular museums in the city, Hiroshima Prefectural Art Museum.

Here you can view impressive collections of around 3500 works. From Japanese Nihonga paintings to traditional Asian arts and crafts, there are so many beautiful things to see in this museum.

This is a museum that’s a must to visit, since it’s one of the top things to do in Hiroshima!

During your stay in Hiroshima, you need to visit the beautiful island of Miyajima. On this island, there are several things to do, and one of those things is to visit the famous Itsukushima Shrine. During high tide, you’ll get the most picturesque view of the shrine since it will reflect on the water a calm beautiful day.

It’s listed as a World Heritage Site by UNESCO and is one of the most beautiful shrines in Japan.

PS: We didn’t know about the high- and low tide at this place, so when we went there wasn’t a reflection in the water. Luckily we found a little puddle where we could snap these magical photos. Something I wish I knew before going there. 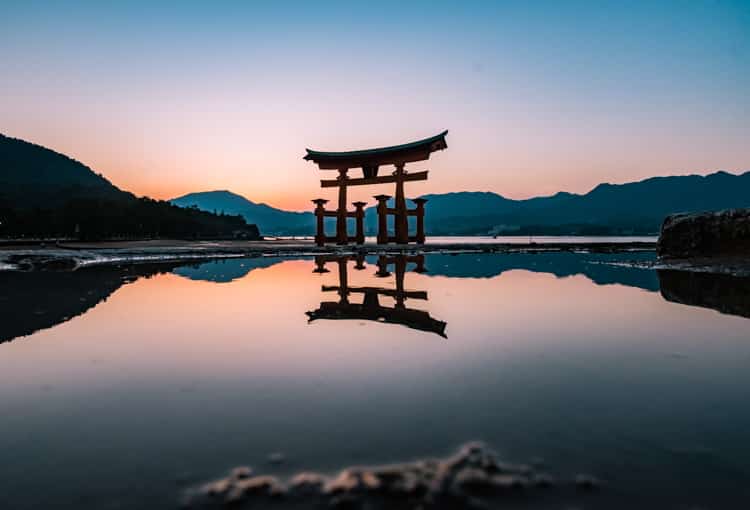 If you’re looking for one of the best spots to view the cherry blossom, then this is the place to go to! When it’s spring and the Japanese cherry trees start to blossom, this park turns into a pink dream.

Other than being a great spot for cherry blossom, this park also has some libraries and museums that are worth checking out. And not forget to mention the beautiful views of the city you get from here.

Gokoku Shrine is a lively shrine that has various religious activities every day. Here come the locals to celebrate their child’s birth, as well as you can see kids dressed up in kimonos to mark their third, fifth or seventh year.

Many students come here to pray for a good result on their tests or dream jobs, and couples come to wish for a happy life and healthy children etc. Here they also celebrate Hatsumode, where around a half million people visit the first seven days of the year. 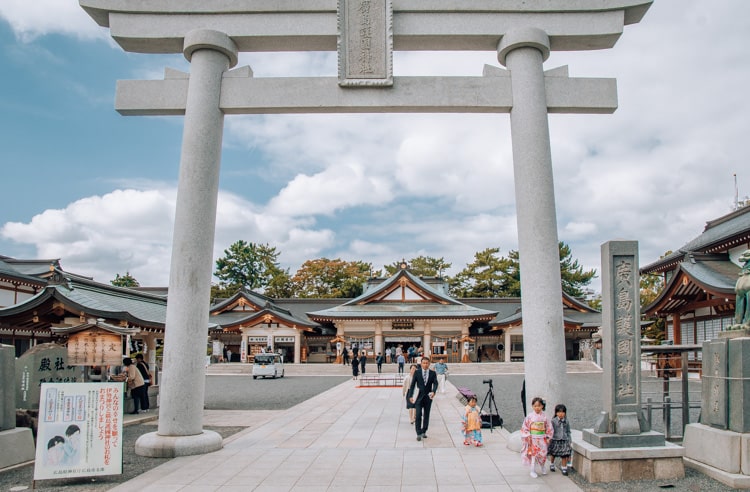 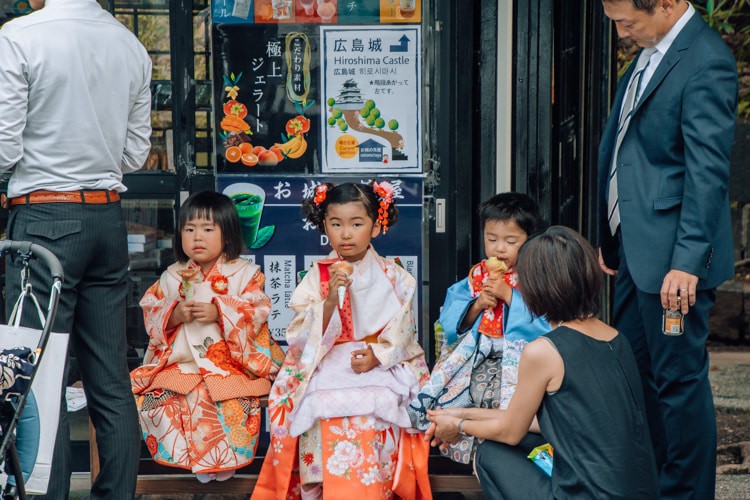 If you’re interested in art, then this is the place to go to. At the Hiroshima Museum of Art, you can view modern European paintings as well as old Japanese oil paintings that date back to the Meji Period.

One of the most visited Hiroshima attractions is the Flame of Peace. This flame has been burning since the day it was lit in 1964, in memory of the people who died during the atomic bombing. It has ben burning ever since and is going to remain burning until every nuclear weapon in the world has been destroyed.

It’s a beautiful history behind this attraction, so there’s no wonder why so many people come to see it every year. 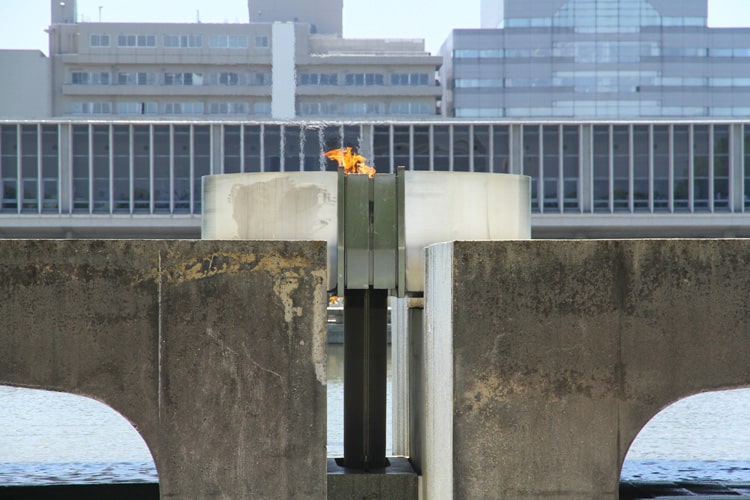 If you’re craving a day of total relaxation, then I can recommend you to visit one of the hot springs around Hiroshima. It’s a perfect way to recharge after a couple of days of sightseeing.

I can recommend checking out these hot springs: Miyahama onsen, Yu-no-Yama onsen or the Yuki onsen.

Are you a fan of baseball? Then this is one of the top things to do in Hiroshima for you!

The Hiroshima Carp haven’t won any sort of championship since 1991, and they’re not super famous worldwide. But one thing that they got is crazy passionate fans.

This is a really fun experience in Hiroshima since you get to see the normally formal and quiet locals being loud and crazy when cheering for their favorite team. They have several songs, cheers, and dances that they do when the Carps play, which is amazing to see.

Some of the Carp fans never sit down during the entire game. They’re just standing up and cheer the whole game!

Not forget to mention that they play in one of the best-named stadiums of all times; Mazda Zoom-Zoom Stadium Hiroshima. 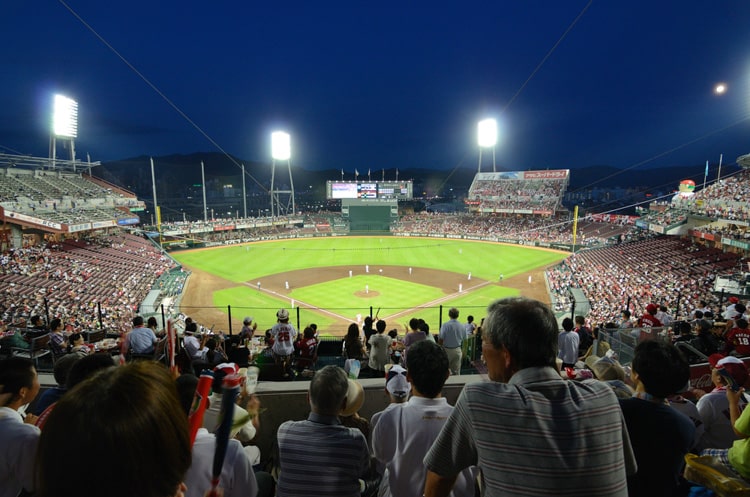 There’s no surprise that there are so many Mazda cars driving around the streets of Hiroshima. Because Hiroshima is the birthplace of the car manufacturer.

If you’re interested in cars, then this is one of the best things to do in Hiroshima. At the Mazda museum, you can go on a guided tour and learn about the history of Mazda. You can also see where- and how the cars are produced.

At the end of the tour, you get to visit the souvenir shop where you can buy lots of cool Mazda merchandises.

When you’re in Hiroshima, you simply have to try the local delicacy Okonomiyaki. Okonomiyaki is a savory pancake with a variety of ingredients of your choice. You can have squid, pork, egg, noodles, sauces, cabbage – anything you want basically in your Japanese pancake. 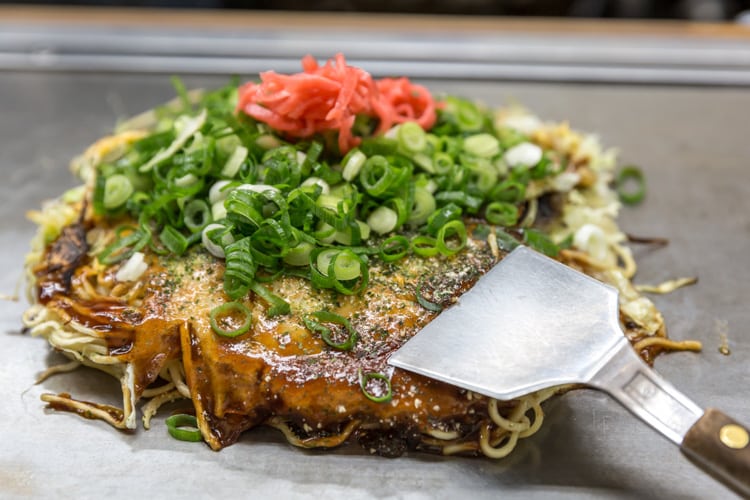 On this farm, they have many cool festivals such as the spring tulip festival, summer sunflower festival, and the autumn dahlia festival. During these festivals, thousands of people come to see the beautiful flowers, as well as taking pictures and enjoying a cup of tea at the café.

If you happen to be in Hiroshima during one of these festivals, I can highly recommend you to visit since it’s just so beautiful!

If you want to visit a traditional Japanese garden I can recommend you to head to Shukkei-en. This garden is located in the heart of Hiroshima and dates back to 1620. It’s a beautiful historical garden where you can enjoy a scenic lake, lovely teahouses, and bridges.

Shukkei-en is a peaceful place where you can sit down and relax in-between sightseeing. 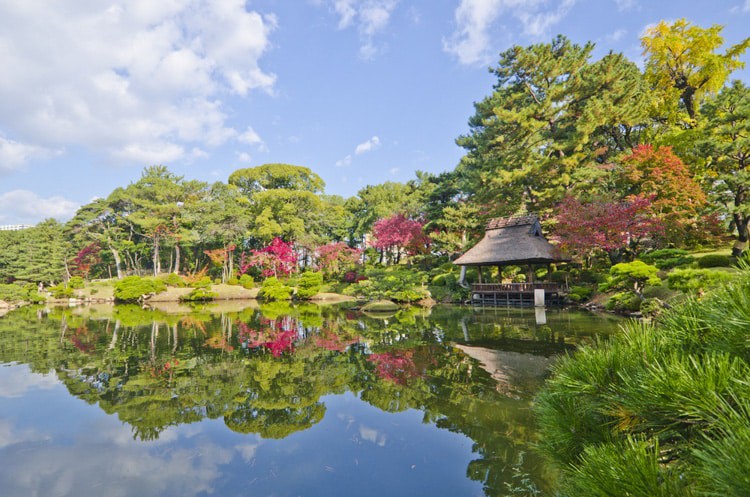 On the beautiful islands of Miyajima, you’ll find the Toshogu Shrine. The Hiroshima Toshogu Shrine is famous for its picturesque torii gate, Itsukushima shrine, that’s built out in the water.

This is one of the most popular things to do in Hiroshima. Not only because of religious intentions and for its history, but also for its beauty.

On Miyajima, you’ll find Mount Misen, which is the main peak of the island. It’s 535m high and takes 30 minutes to walk up to the summit.

When you’re up at the top you can enjoy the beautiful views as well as some small temples and shrines. 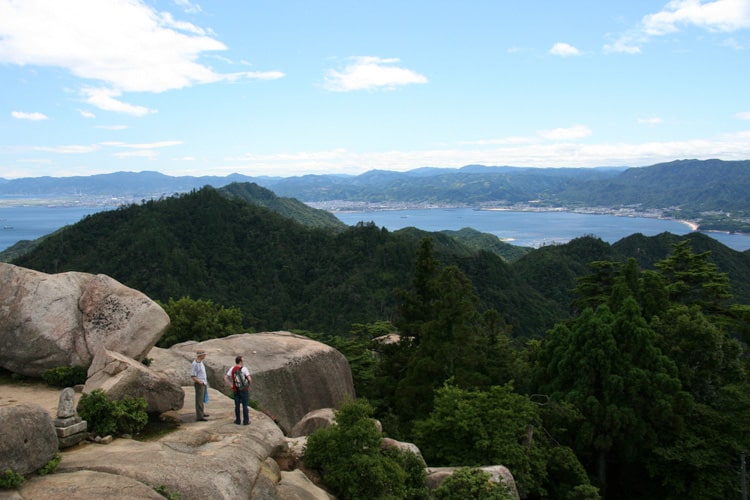 The Mitaki-dera Temple was built 809 during the Daido era in Japan. This is a temple that’s full of interesting history and beautiful surroundings.

This is also one of those places in Hiroshima that’s popular to view the cherry blossom and colorful leaves during autumn.

If shopping is more your thing while traveling, then you should head to the Miyajima Omotesando Arcade. It’s a famous shopping street on Miyajima island outside Hiroshima, and here you can buy Japan souvenirs as well as local delicacies such as momiji manjuu (maple buns).

It’s also here where you can see the ”O-Shakushi”, the world’s largest rice scoop. 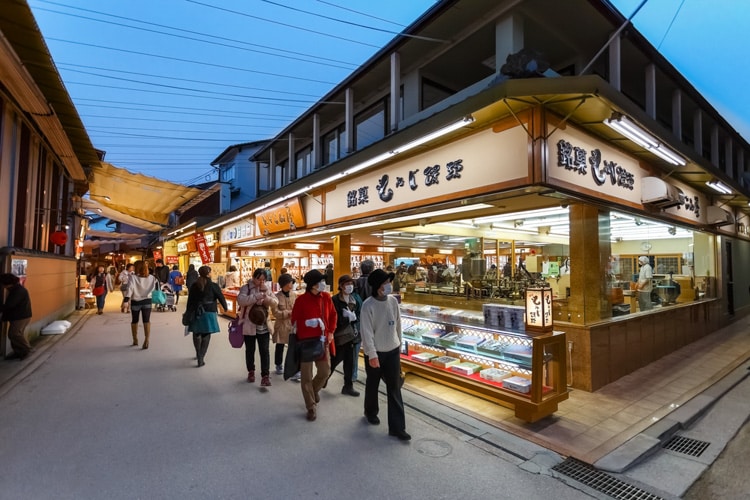 Do you have any other questions about the top things to do in Hiroshima? Leave a comment below!