Do you want to know more about Vietnamese food? Vietnam is a country that’s known all over the world for its delicious food.

In addition to famous dishes like pho and Vietnamese spring rolls, there are so many more interesting dishes to taste during your stay. Here are 25 traditional dishes that you can taste for a local experience in Vietnam:

It’s a healthy Vietnamese food that’s popular to eat as an appetizer. They’re served cold with a peanut dipping sauce. 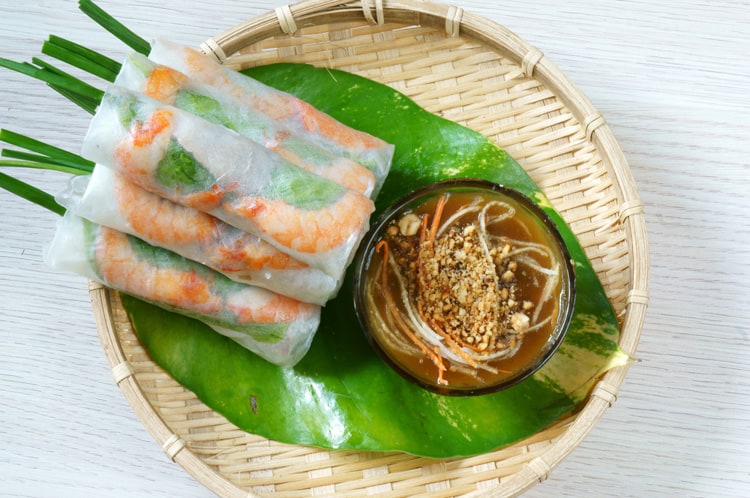 This is a Vietnamese style pancake filled with shrimp, pork, bean sprouts, and egg. The fillings is fried and then wrapped in rice paper and drenched in fish sauce before being eaten.

It’s a classical dish to eat in Vietnam, so make sure to add it to your bucket list of Vietnamese food. 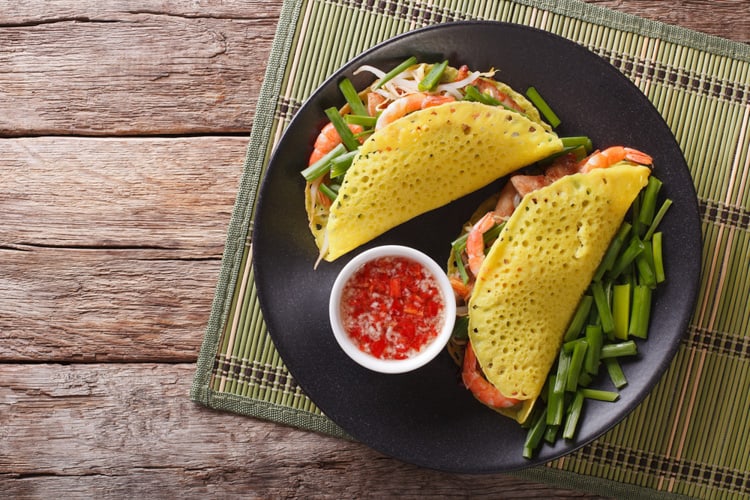 Bun cha is a speciality in Hanoi that you can find at the various food markets and food stalls around the city.

It’s made of charcoal grilled pork served with cold rice noodles and a bowl with broth made from fish sauce. 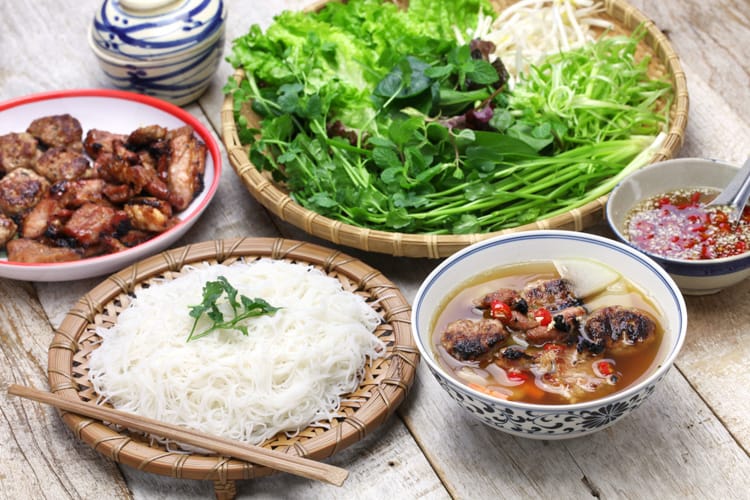 This is a Vietnamese style samosa made of deep fried dough filled with minced pork, mushrooms and vermicelli noodles. It’s delicious and a must to taste in Vietnam. 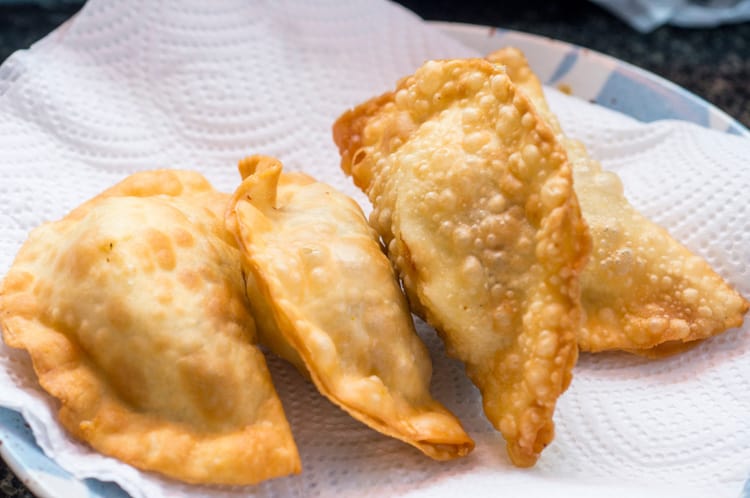 Banh cuon is a rolled up rice flour pancake filled with minced pork and mushrooms. These pancakes are served smoking hot and has a soft texture, usually with a dipping fish sauce. 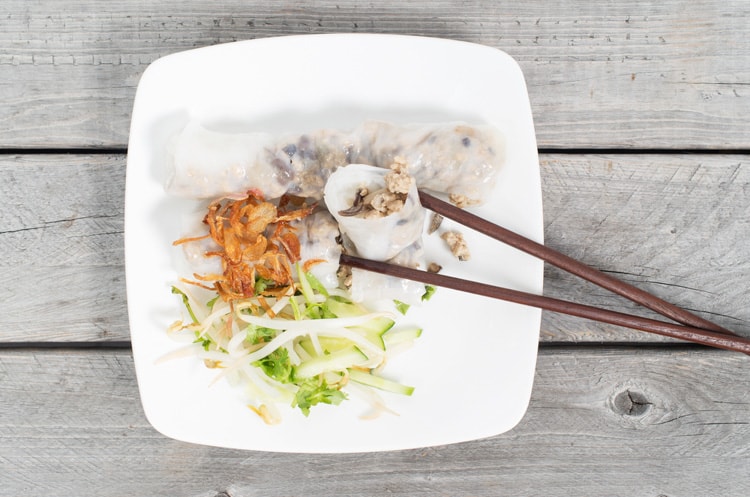 This is a salad made from peeled and thinly sliced banana flowers mixed with carrots, green papaya, cilantro, and chicken.

The dish is served with a salty fish sauce dressing and crunchy peanuts on the top. 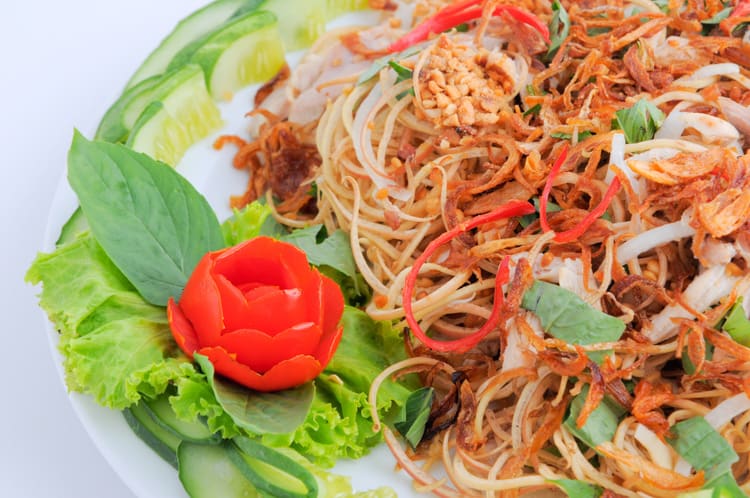 Cha gio are crunchy Vietnamese spring rolls that are very popular to eat in Vietnam. They’re made with a filling of vegetables and meat and topped with a tangy sauce before being served.

It’s usually eaten as an appetizer before a main course. 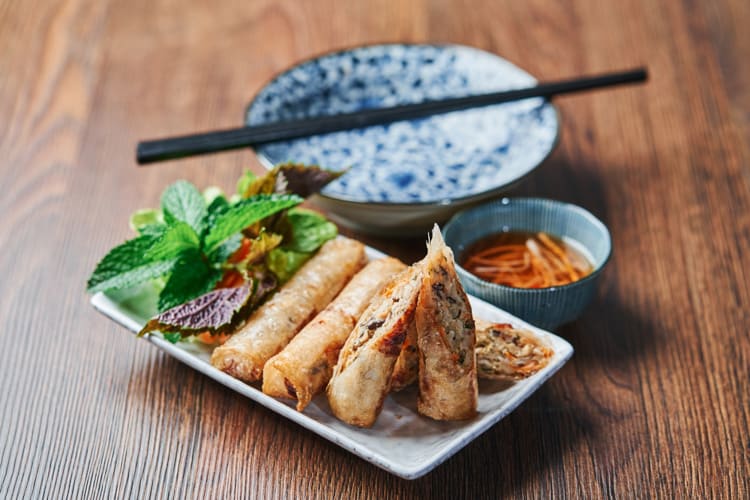 Another speciality from Hanoi is the local dish mi quang, which is a dish that’s usually made from meat noodles mixed with shrimp, peanuts, mint and quail eggs.

It’s a delicious dish, so make sure to order it if you see it on a menu in Vietnam. 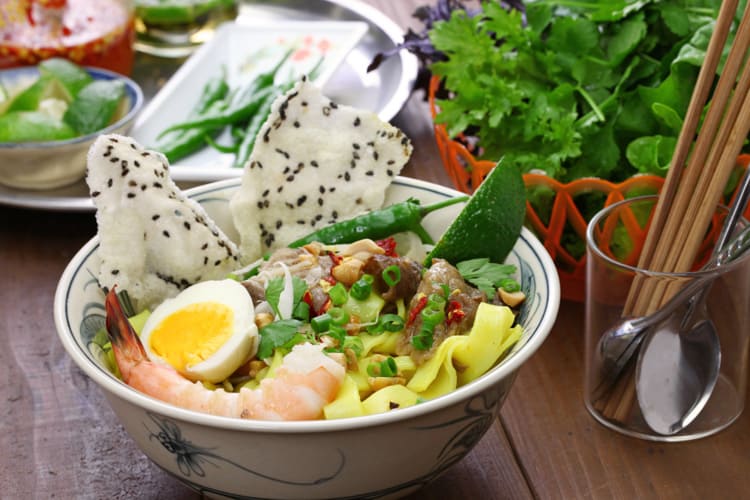 Rau muong is a common dish to find in restaurants in Vietnam. It’s made from stir fried morning glory seasoned with garlic. 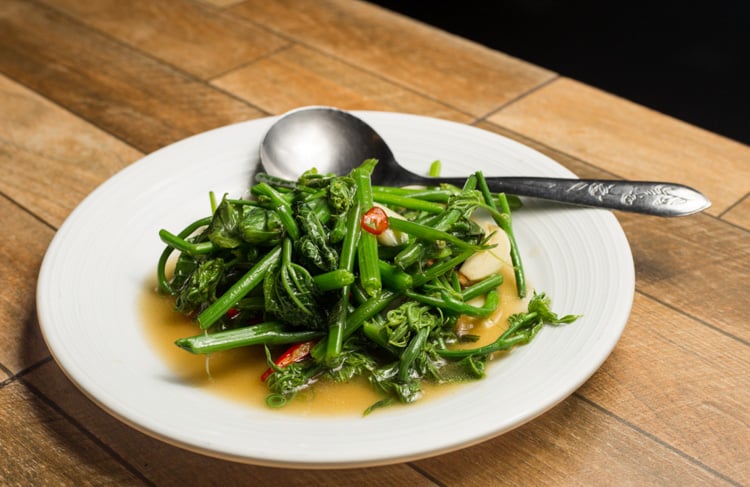 Cao lau is a Vietnamese noodle dish that originates in Hoi An in central Vietnam. It’s traditionally made from pork and various greens and served on a bed of rice noodles.

Before served on the table, it’s topped with crispy crackers. 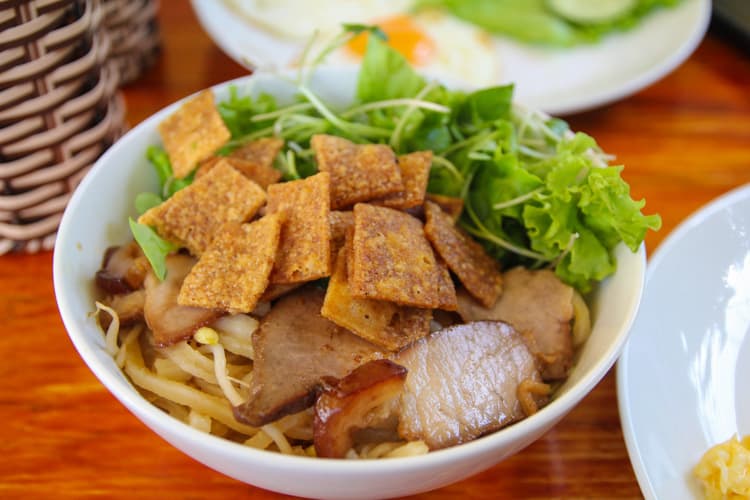 Cha ca is a common dish to eat in Hanoi. It’s made of white fish sautéed in butter with dill and spring onions. It’s topped with peanuts and served with rice noodles on the side. 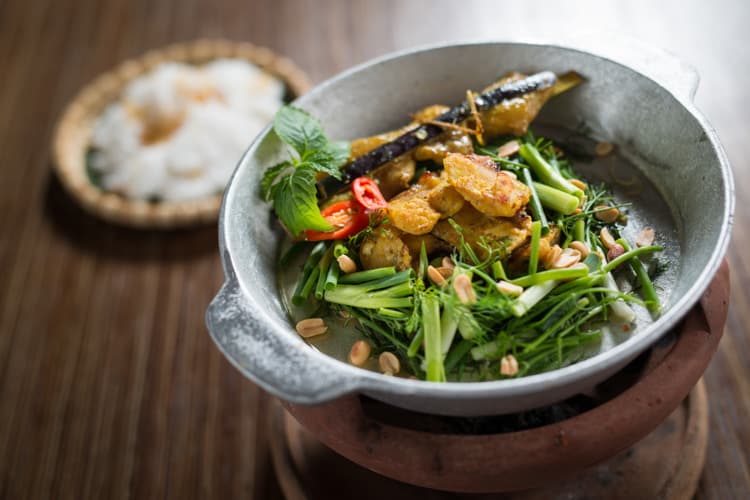 This is a streetfood snack from Saigon in Vietnam. It’s made from rice flour dough fried until crispy and then cooked together with some egg. 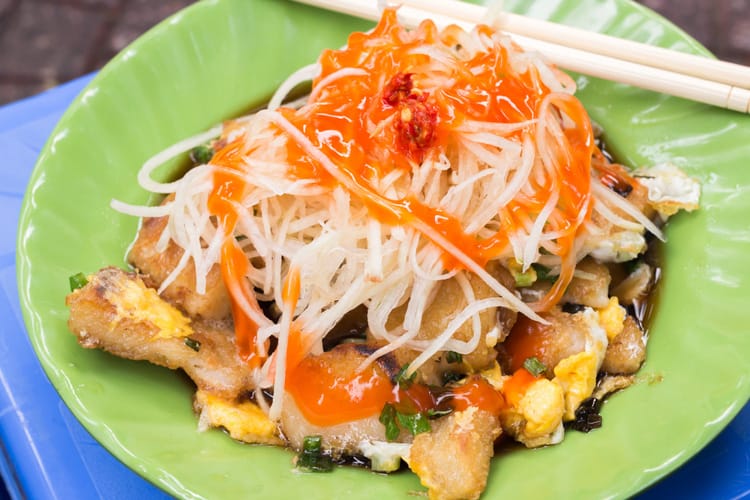 Bun dau mam tom is one of the smelliest foods in Vietnam and is known as the Vietnamese fermented shrimp paste noodles in English.

The hot rice noodles are usually served with fried tofu and the purple fermented shrimp sauce. Some places serve pork or sausages on the side as well.

It’s a unique dish that’s worth tasting at least once during your stay. You never know, you might like it. 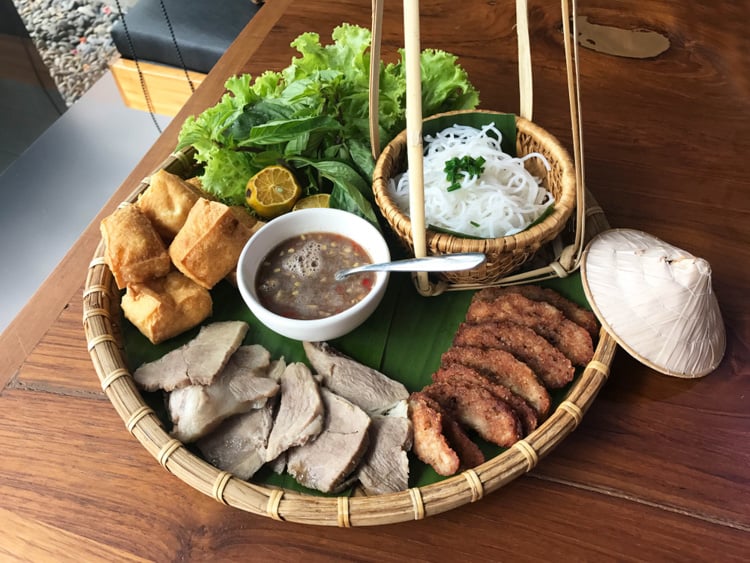 Bo luc lac is made of cubes of beef fried with pepper, garlic, and vegetables. It’s a classic dish to eat in Vietnam and is just as loved among the locals as the tourists. 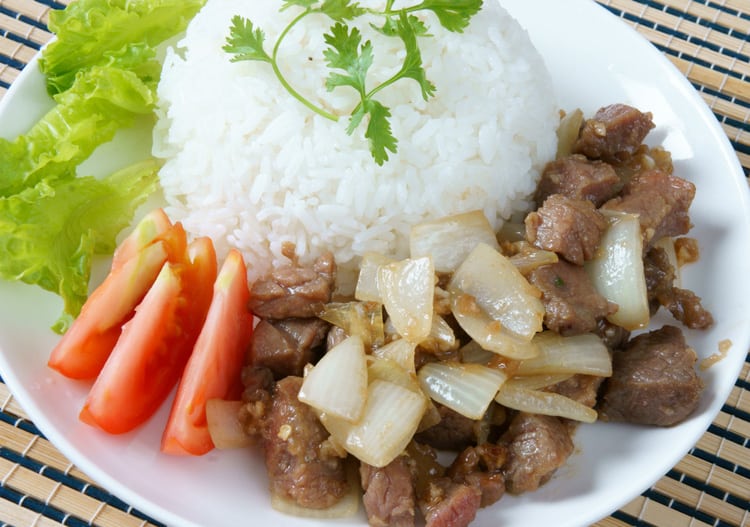 The dish banh khot is another style of the Vietnamese pancakes and consists of a crunchy outside made of coconut milk.

These crunchy pieces are then filled with various fillings that usually consists of shrimps, mung beans, and spring onions. It’s really good and worth tasting while you’re in Vietnam. 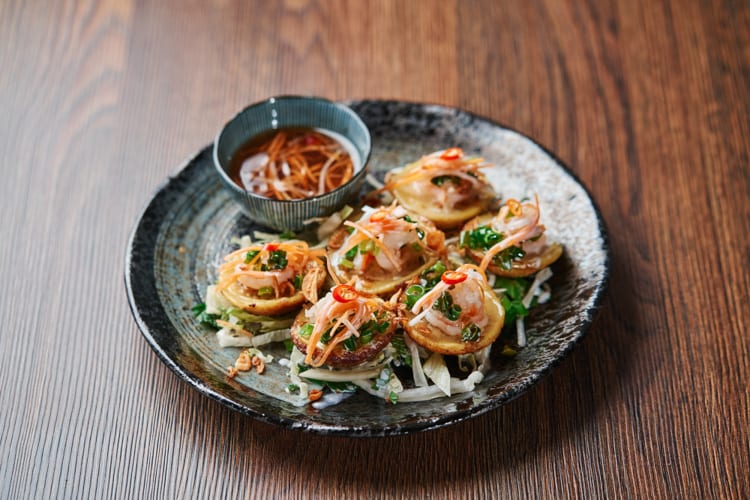 Vietnams national dish pho is one of the most famous dishes in the country. It’s a noodle soup made from a beef or chicken broth flavored with cilantro and ginger.

Flat rice noodles, spring onions, and pieces of chicken, beef, or pork are then added to the soup before being served.

It’s simply delicious and a must to add to your bucket list of Vietnamese food. 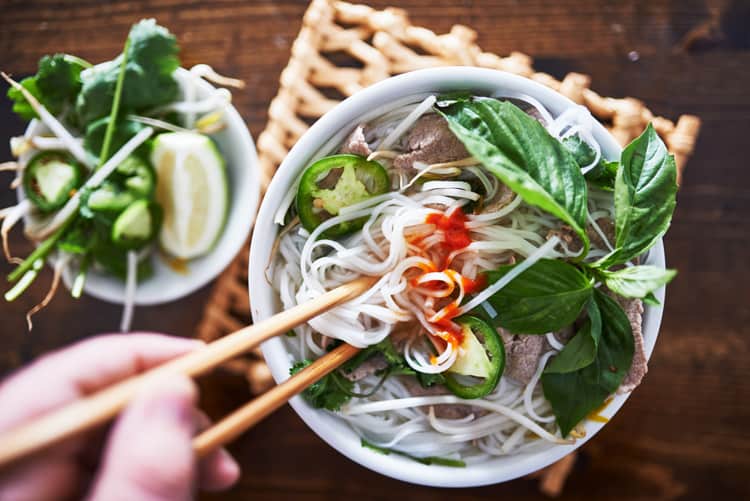 Banh mi is another of the most popular dishes to eat in Vietnam. It’s basically a baguette sandwich filled with various meats and vegetables.

It’s a simple but delicious dish that you have to taste while you’re in Vietnam. 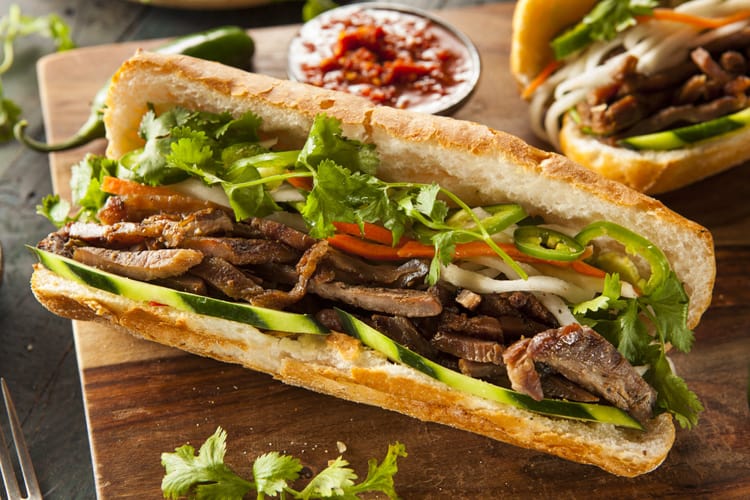 Honey marinated chicken grilled over a fire – that’s the local dish ga nuong. The meat is grilled until tender with a slightly crispy outside. 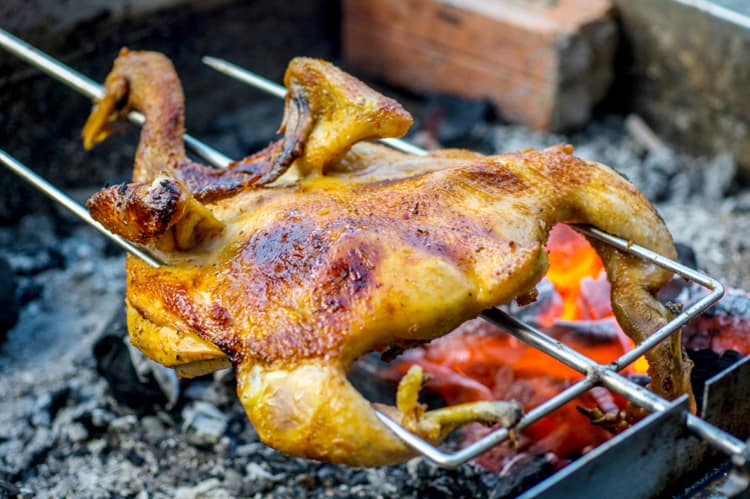 Bun bo nam bo is one of vietnams most loved noodle dishes. It’s made from noodles topped with slices of beef, bean sprouts, fresh herbs, dried shallots, peanuts, and some fish sauce and chili pepper.

Make sure to taste it. Maybe it will become your favorite Vietnamese food as well. 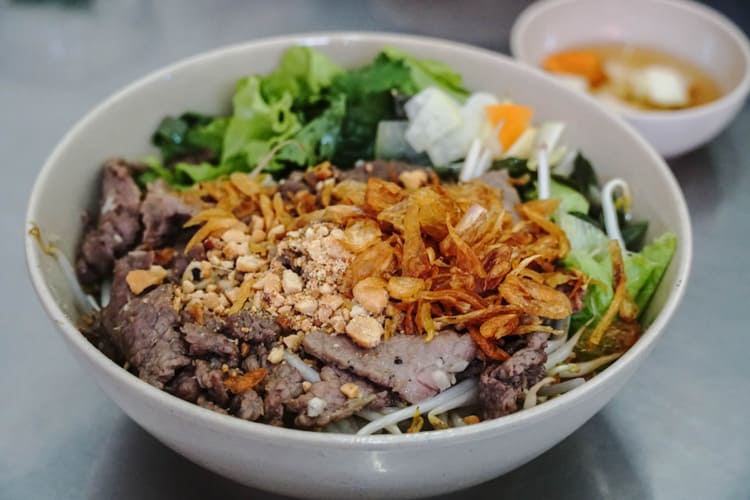 Imagine a dish that’s a mix between the famous dishes goi cuon and pho – that’s the local dish pho cuon.

It has the flavors of pho and the shape of goi cuon with its ingredients wrapped into small packages. It’s usually filled with fried beef, herbs, and cucumber or lettuce. 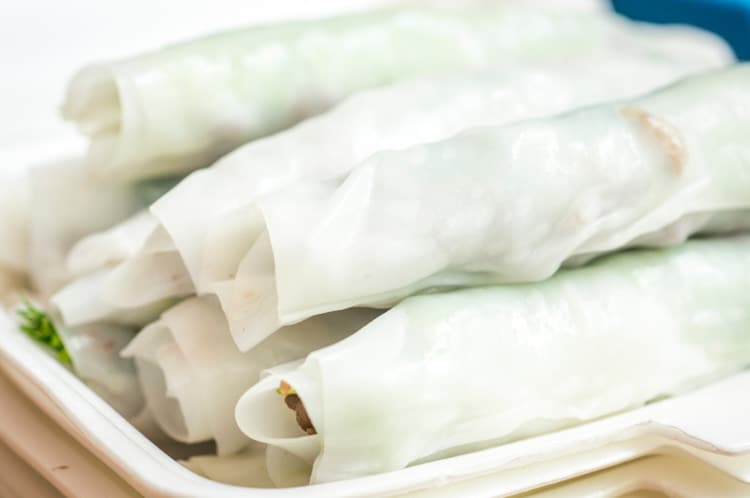 A hearty soup made from crab, noodles and morning glory. It’s common to find in various food stalls around the country, specially along the coast of Vietnam. 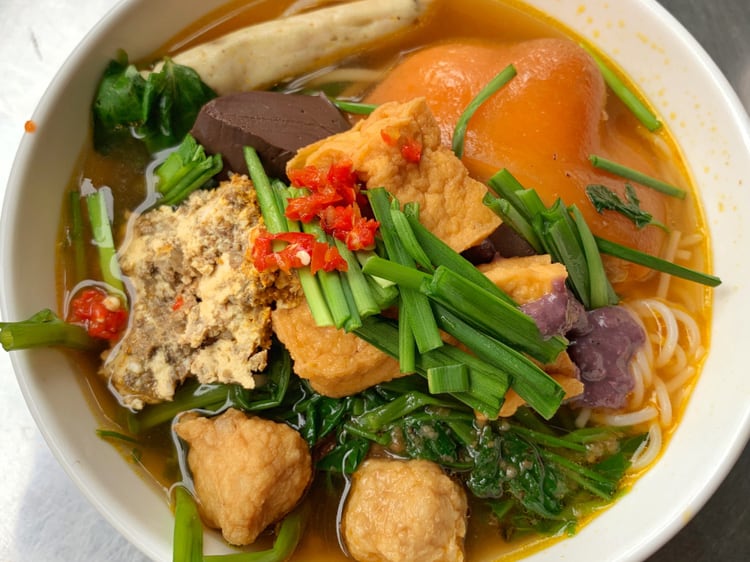 If you’re a fan of fried rice, then you’re going to love this local dish. Com rang is made from rice, small pieces of meat, various vegetables that are fried together with some fish and soy sauce.

It’s a simple but delicious dish to taste in Vietnam. 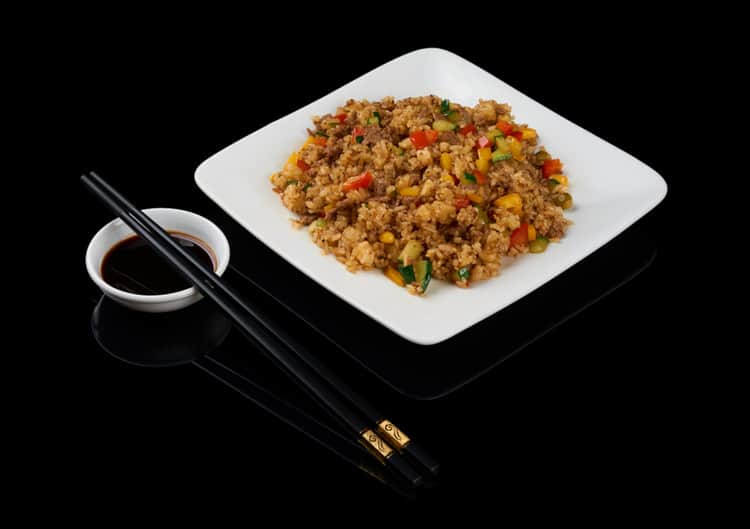 Steamed pork buns is something that’s common to find at the food markets in Vietnam. The buns are usually filled with minced meat and hard-boiled quail eggs, however some buns doesn’t have any filling at all.

Remember; the cheaper the buns, the less stuffing. 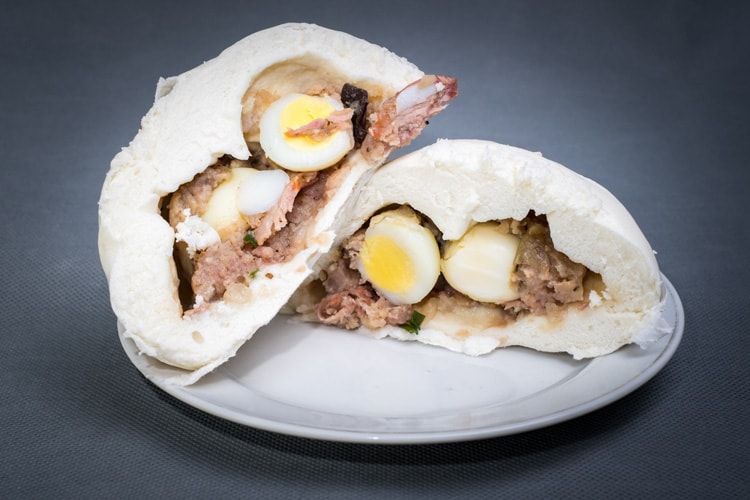 Bo la lot looks like spring rolls in shape, but they’re not deep-fried nor wrapped in rice paper. They’re actually wrapped in wild betel leaf and filled with ground beef.

They’re then grilled over a fire and served on a plate with a dipping sauce. 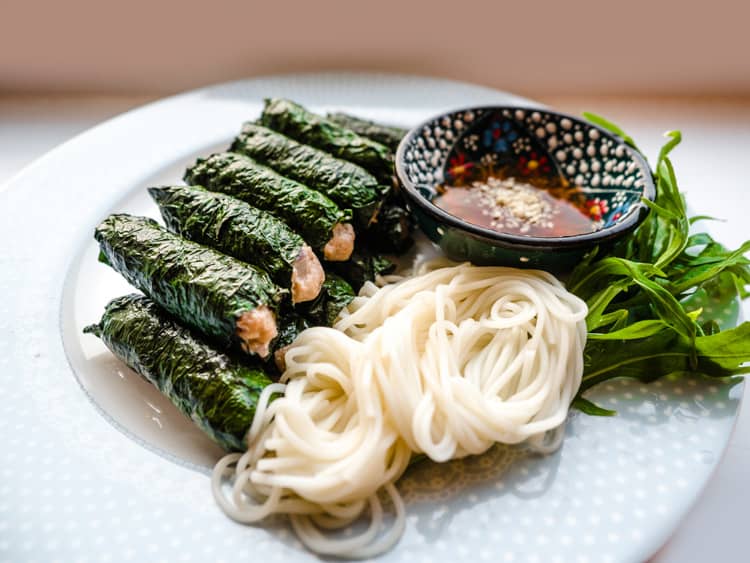 My ga tan is a chicken noodle soup that’s common to eat when you’re sick. It doesn’t look so good, but it’s actually quite popular among tourists – especially during the cold winter months in Vietnam. 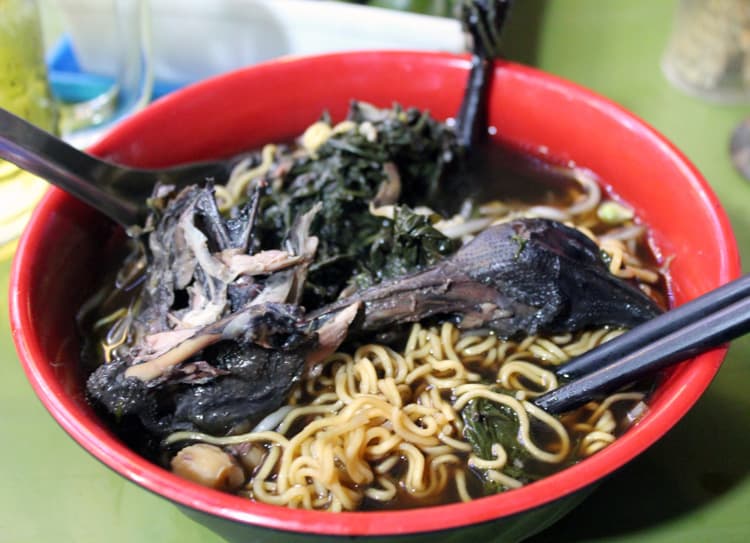 The Vietnamese cuisine is considered to be one of the healthiest foods in the world. The Vietnamese food is not only healthy, but also very delicious.

What’s the national dish of Vietnam?

Pho is the national dish of Vietnam.

What is a traditional meal in Vietnam?

Vietnamese desserts and sweets to taste

There are many delicious desserts in Vietnam. Below are some of the most popular sweets to taste in Vietnam. 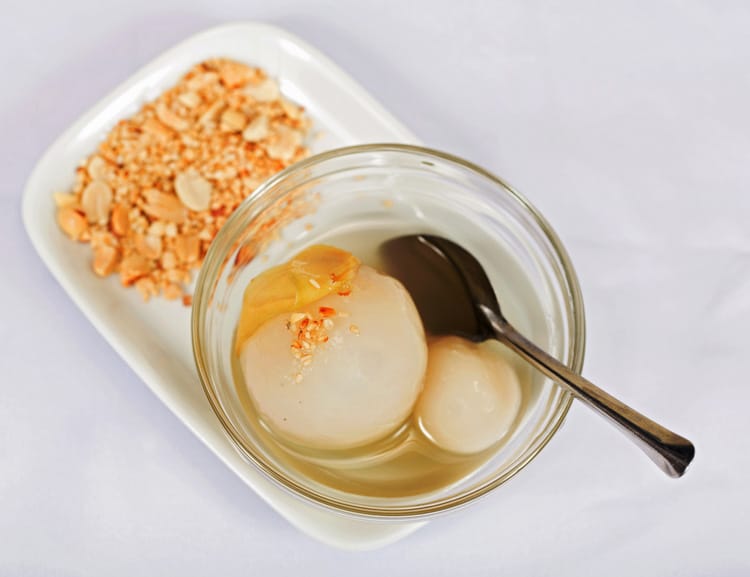 Do you have more questions about Vietnamese food and cuisine? Leave a comment below!