Top 10 Things to Do in Budapest

Do you want to know the top things to do in Budapest? Then you should continue reading below!

Budapest is one of my absolute favorite cities in Europe, and also one of the most beautiful and lively. Budapest is a great city that offers everything from flavorful food to historical places, castles, and beautiful buildings. One can say that Budapest is one of Europe’s most exciting cities to visit, as there is always something new to experience or to explore.

Here is my list of the best 10 Things to Do in Budapest. Enjoy!

Gellért Hill is the highest peak of the central parts of Budapest, and as you might think, this place offers a great view over the city. Gellért Hill was named after Saint Gerard, which according to the legend, was squeezed into a barrel by pagan Hungarians and thrown down the hill. However, this place is a great spot for those who want to take panoramic pictures of Budapest and visit a historic place! A visit to the Gellért Hill is a must among the things to do in Budapest for Photographers!

This charming little isle lies in the middle of the Danube and is one popular attraction in the city. Whether you’re looking for grassy meadows for lovely picnics, lively open-air clubs or just a nice run around the island’s path, there are somethings for everyone at the Margaret Island in Budapest.

Relax in a thermal bath

Around Budapest, there are many thermal baths that are dotted throughout the city. No wonder of that, since the city has an abundant amount underground thermal waters. One of the most famous baths in Budapest is the Széchenyi Bath, which is a huge pool of thermal water that is surrounded by stunning architecture.

As the thermal water is hot all year round, it means that the outdoor pools remain open even during the winter months. Swimming outside in a beautiful and warm pool when the snow is falling is an amazing experience.

Shop at the Central Market Hall

Budapest is a city that is beautiful by day, but incredibly stunning by night as all the buildings along the river reflects in the water. To take a boat ride along the river is an excellent way to explore Budapest as you get beautiful views of both Buda Castle, the Parliament, and Fisherman’s Bastion. For you who are interested in taking a cruise on the river, there are a few options to choose from. Either you can go the most touristy way and go on a guided tour with audio headsets (which gives interesting facts and history about Budapest) or either take a romantic dinner cruise (which I recommend strongly).

If there is something that Hungary is famous for, then it’s for its cuisine. Eating traditional food is simply a must when it comes to things to do in Budapest for the food-lover. Many of the traditional dishes in Hungary consists of paprika, meat, and cabbage. When visiting Budapest one can simply not leave without tasting some of their traditional dishes such as; gulyás (meat soup), paprikás csirke (paprika chicken), lecsó (tomato and pepper stew), töltött káposzta (meat stuffed in cabbage), and kolbász (sausage). When it comes to a snack in the middle of the day, then you just have to taste lángos at the famous Central Market Hall. Treat yourself at a day spa

The capital of Hungary has long been known for being the capital when it comes to spa treatments. Visitors come yearly from all over the world to treat themselves with relaxing spa treatments to treat both the body and the soul. Spa-visits has long been a ”tradition” when visiting Budapest, as it is excellent treatments at low prices. A visit to a day spa is something that you have to write down on your list of things to do in Budapest!

The beautiful Buda Castle together with the Hungarian Parliament is two of the city’s most famous landmarks. This particular sight is one of the sights that you simply cannot miss during your stay, as it is one of the top things to do in Budapest. The Buda Castle is incredibly beautiful with its architecture, which also has been on the UNESCO list of world heritage since 1987. Under the Buda Castle, you will find a 1.5-kilometer long labyrinth of caves and cellars that are ready to be explored. It is actually so that this labyrinth once was a home to a prison, and one of its most famous prisoners was Vlad Tepes, also known as Count Dracula.

These two sights you will find in the District V, which is filled with beautiful buildings and historical sights. The beautiful Parliament House lies near the Margaret Bridge at the end of the district on the banks of the river. Inside the Parliament, you can either go on a 45 minute guided tour or explore the place on your own.

Close to Deák Square, lies St. Stephen’s Basilica – the largest church in Budapest. This beautiful church is free to enter, but it is a nominal fee of HUF 500 to visit the observation deck, which is entirely worth it!

Enjoy the view from the Fisherman’s Bastion – One of my favorite things to do in Budapest!

The beautiful neo-Gothic terrace of the Fisherman’s Bastion is located on the lovely Castle Hill and offers great panoramic views of Budapest. The Fisherman’s Bastion architecture is fairytale-like with its seven ornate turrets and details. These seven towers symbolize the tents of the seven Magyar tribe leaders who settle in the Carpathian Basin in the 896th, which lead to the existence of today’s Hungary! Definitely one of the places that you have to write down on your list of things to do in Budapest! 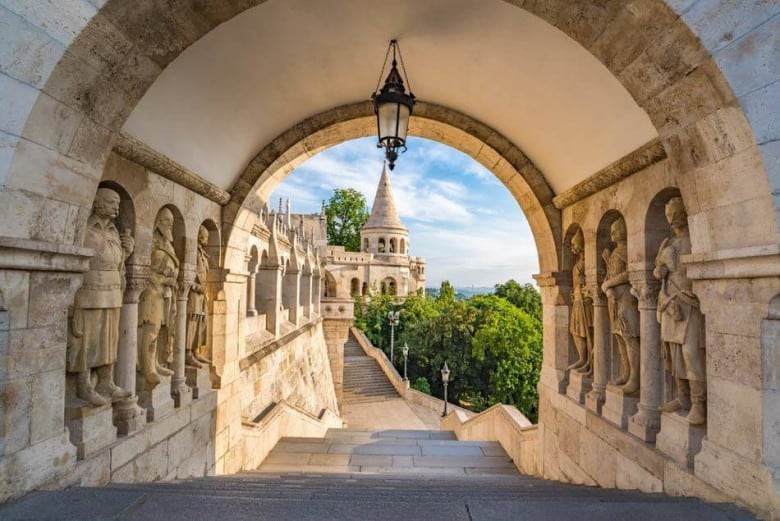 Click here to find the cheapest flights to Budapest

Click here to find the cheapest hotels in Budapest