Want to know more about Cypriot food and cuisine? Cyprus is a country that’s famous for its beautiful beaches, relaxed lifestyle, and nice climate. But how about the food from Cyprus?

The cheese Halloumi I’m pretty sure that you have heard about before, or seen in your local supermarket. It’s traditionally made and produced in Cyprus, and is a common product to use in the Cypriot cuisine.

In addition to the delicious halloumi cheese, there are several other dishes with both Greek and Turkish influences. Many of them are similar to famous Greek and Turkish dishes, but with the Cypriot touch to it.

Here are 12 traditional dishes from Cyprus that you can eat for a local experience:

Souvlaki is originally a Greek dish, but in Cyprus they have their own version of it.

It’s one of the most popular fast foods on the island and consists of chunks of meat grilled on skewers. The meat is put inside a Cypriot pita bread and is often filled with cucumbers, tomatoes, parsley, onion, and cabbage.

You can order a plain or mixed souvlaki, which is made with sheftalia as well.

Sheftalia is made of minced pork with different kinds of spices (usually onion, parsley, and pepper, but sometimes they also use garlic, halloumi and cinnamon). The minced meat mixture is wrapped in caul fat, formed into balls, and grilled on skewers.

It’s one of the most popular food in Cyprus, both among the locals and tourists. 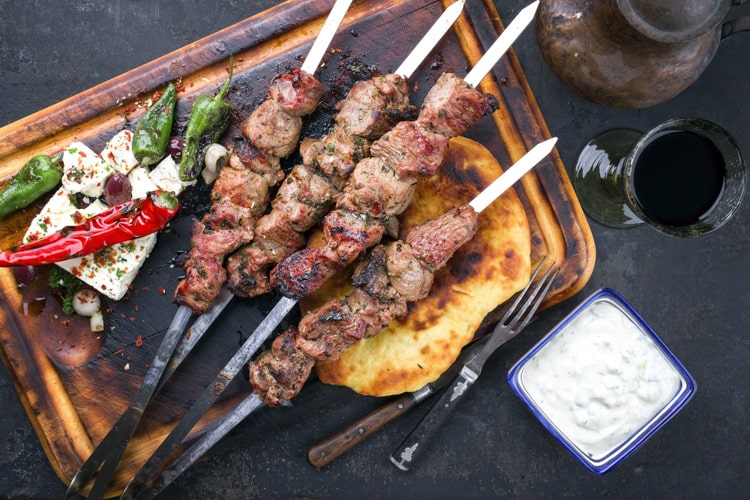 Koupepia is a favorite in Cyprus and is their own version of the famous dolma. It’s made of minced meat, rice, onions, herbs, and tomatos wrapped in fresh vine leaves.

Halloumi originates from Cyprus, and is one of the most popular foods to eat in the country. It’s famous for its salty flavor and rubbery texture, and has become popular to eat all over the world.

In Cyprus it’s common to eat as a starter, a side dish, or in salads. 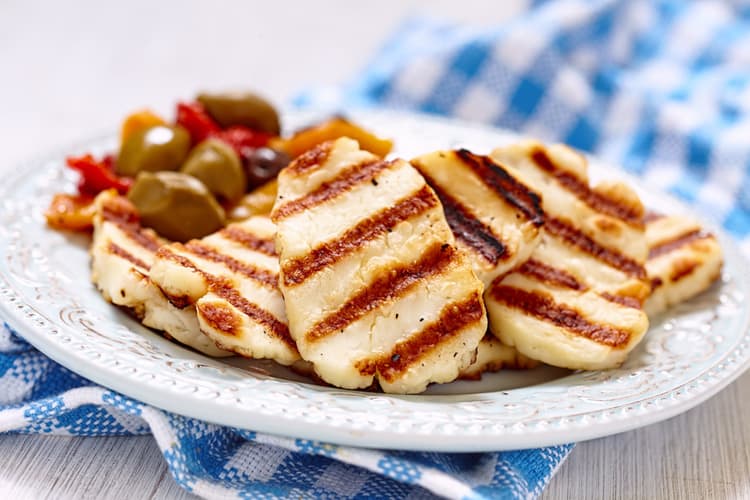 The Greek-Cypriot people are crazy about gyros. Gyros is originally a street food from Greece, but it’s a popular food in Cyprus as well.

In Cyprus you can eat traditional Greek gyros, as well as the Cypriot-style gyros. The Cypriot version of gyros is very similar to the traditional one, but in a Cypriot pita bread.

The Greek-style or Cypriot-style pita bread is filled with either pork or chicken, tomatoes, onions, salad, french fries, and tsatsiki. It’s simply delicious, and a must to taste while you’re in Cyprus.

One of my favorite places for gyros in Cyprus is “Gyros Salonikiotikos” in Paphos. 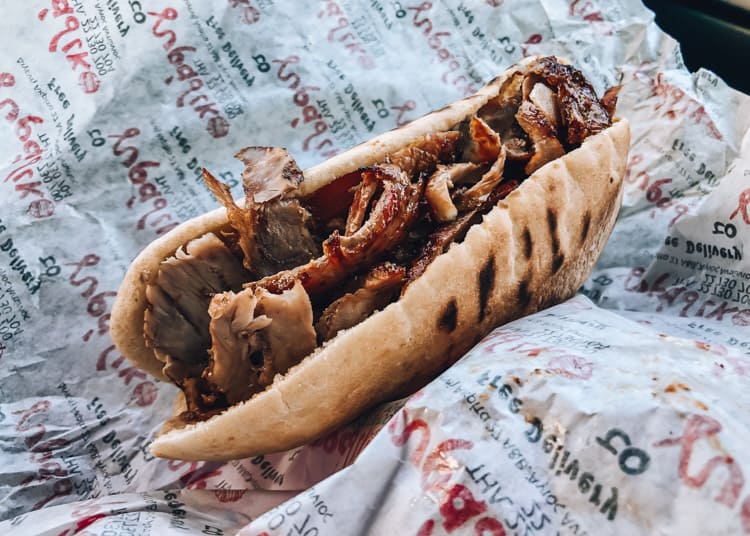 Makaronia tou fournou is originally a Greek dish called ”pastitsio”, but it has become so popular in Cyprus that they have come up with their own version.

What differs the Greek dish and the Cypriot dish is the cheese. In Cyprus they use halloumi with mint, pasta, béchamel sauce, and minced pork with tomato.

It’s cooked in the oven in a large pan, and is served as a main dish with some salad on the side.

This is probably one of the most famous and popular food in Cyprus.

Kleftiko is a stew made of lamb, red wine, bay leaves, and oregano. It’s cooked for several hours in a mud stove until tender.

It’s served with oven baked potatoes or bulgar wheat cooked in a tomato and onion sauce. 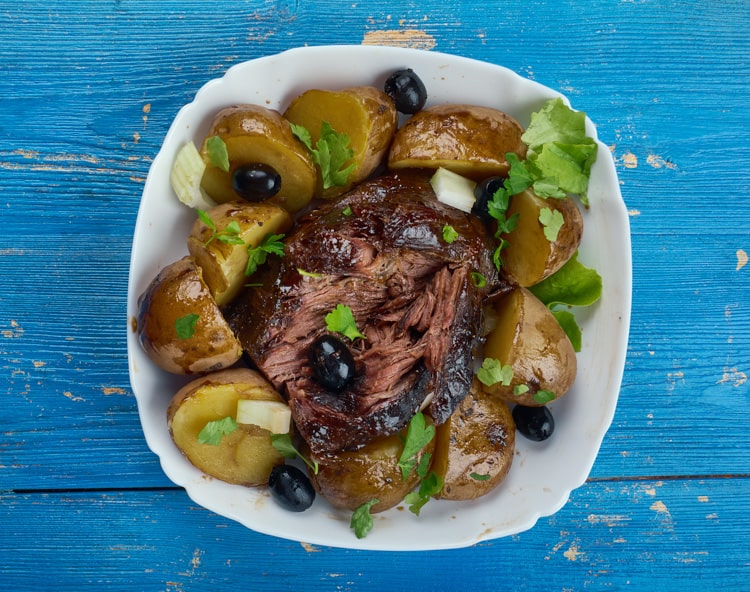 Stifado is a beef stew made of chunks of beef, tomato sauce, onion, garlic, and different kinds of spices.

The ingredients are stewed in the pot for about 2 – 2,5 hours, and is then served with potatoes, rice, and different kinds of vegetables. 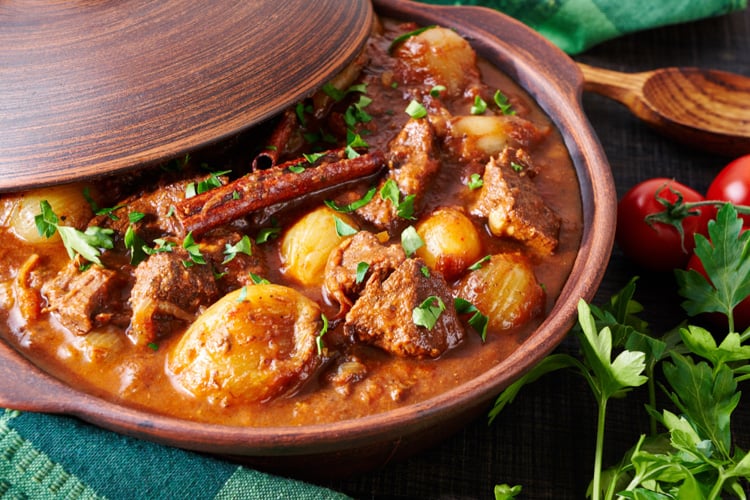 Ttavas means ”clay pot” in Grek and refers to the way to prepare this dish. It’s made of big chunks of lamb that’s cooked together with rice, vegetables, cumin, and potatoes in a pot.

It’s a delicious meal that originally comes from the Lefkara village in Cyprus.

Souvla is similar to souvlaki, but have a different taste. It’s made of big chunks of meat that are slow-cooked on skewers over a charcoal grill, known as foukou.

The meat that they use for souvla is usually the neck or shoulder of lamb, chicken, or pork.

It’s one of the most popular dishes in the Cypriot cuisine, and is popular to eat when gathering with friends and family while chatting and drinking. It’s also common to eat during Easter Sunday, to celebrate the end of fasting.

Souvla is usually served together with other small dishes. Salads and potatoes are common side dishes to have with this Cypriot food. 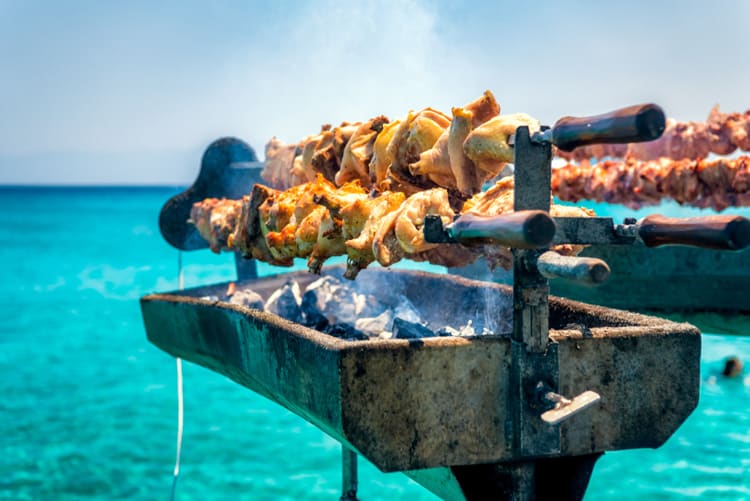 Kotopoulo me Kolokassi is chicken stew with taro. Taro is a tropical plant that tastes similar to potatoes, and has been grown and eaten in Cyprus for centuries.

This stew is made of big chunks of taro that are stewed in a pot with chicken, celery, and onions. It’s served with a tomato sauce made from vegetables and different kinds of spices.

It’s delicious, so make sure to add this dish to your Cypriot food bucket list! 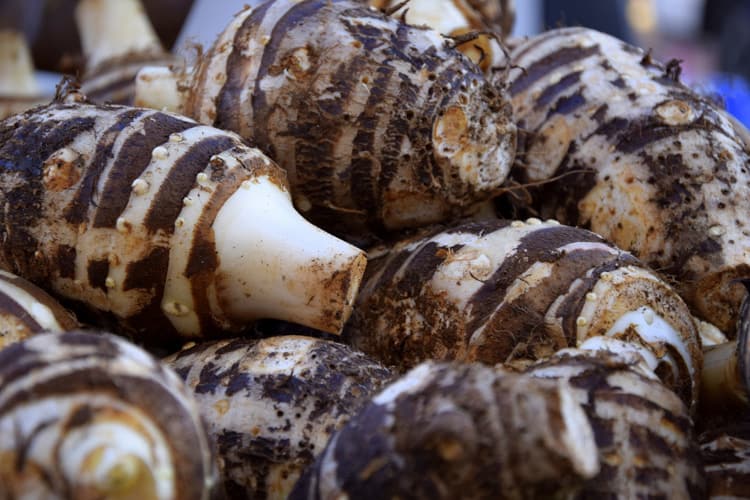 Resi is a traditional food from Cyprus to eat during weddings, mainly in Paphos and the mountain areas of Limassol.

The preparation as well as the cooking of this dish is a part of the traditional wedding ritual. It’s made of wheat cooked in a meat broth.

If you’re attending a wedding in Cyprus, make sure to try this traditional Cypriot food.

Cypriot meze is not exactly a dish, but more of a type of dinner that consists of several “small” dishes.

The meze starts with some appetizers, usually bread, tahini, tsatsiki, olives, and a salad. After the appetizers the main courses start to roll in. It’s a lot of food and the dishes varies from restaurant to restaurant, but some standard dishes are kleftiko, stifado, and halloumi.

The portions are usually very big for being “small” dishes, and from my experience, you can easily share a 2 person meze on 3 people – depending on how hungry you are of course.

When in Cyprus, make sure to try the meze. That way you get to taste several different local Cypriot dishes.

One of my favorite restaurants to eat meze is called Symposio Tavern. It’s located in the Trodos Mountains, and should not be missed if you want to eat a delicious local meal. Their home made halloumi is one of the best I’ve ever had.

NOTE: You have to be a minimum of 2 persons to order a Cypriot meze. 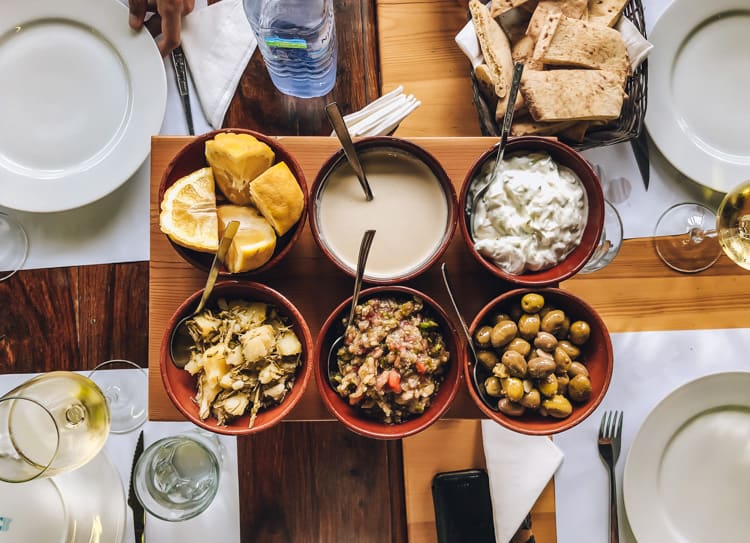 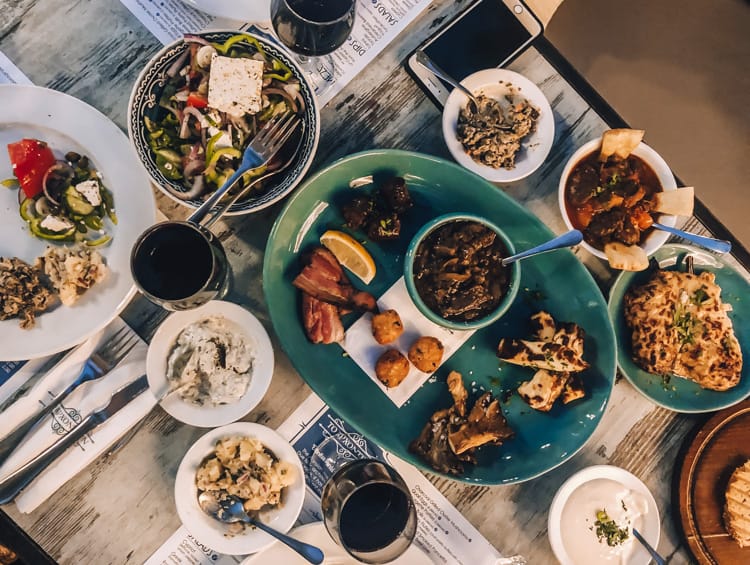 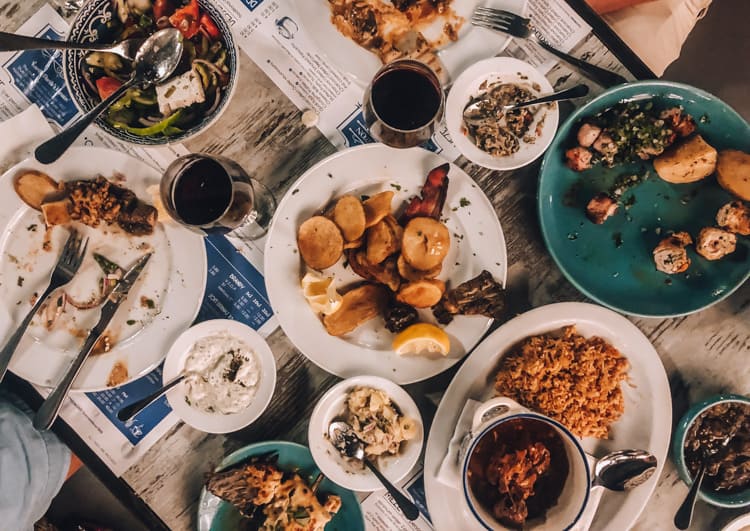 The Cypriot cuisine is closely related to the Turkish and Greek cuisine, but has also been influenced by the Ottoman, Middle Eastern, Catalan, French, and Italian cuisines.

In the Cypriot food they often use ingredients such as zucchini, potatoes, peppers, okra, beens, tomatos, chickpeas and lentils. When it comes to spices and herbs, parsley,  oregano, cumin, mint, and cilantro is frequently used.

A traditional cypriot dinner start with some appetizers and salads, and is followed by main dishes that are mostly meat-based. They finish their meal with some local sweets and a cup of Cypriot coffee.

Do you have more questions about Cypriot food and cuisine? Leave a comment below!